Northern Ballet’s Cleopatra is a mesmerising production that beautifully illustrates the company’s strengths.

The show takes the audience on a journey akin to wandering through an extravagant museum exhibition, effectively bringing ancient Egypt to life. Production and choreography – from the hieroglyphics projected onto the backdrop to the stances adopted by the dancers – combine to evoke the era in an absorbing spectacle.

Choreographer David Nixon packs a lot into the narrative. This is necessary, of course, to portray the full story of courageous Cleopatra and her triumphant rise as the Pharaoh Queen. 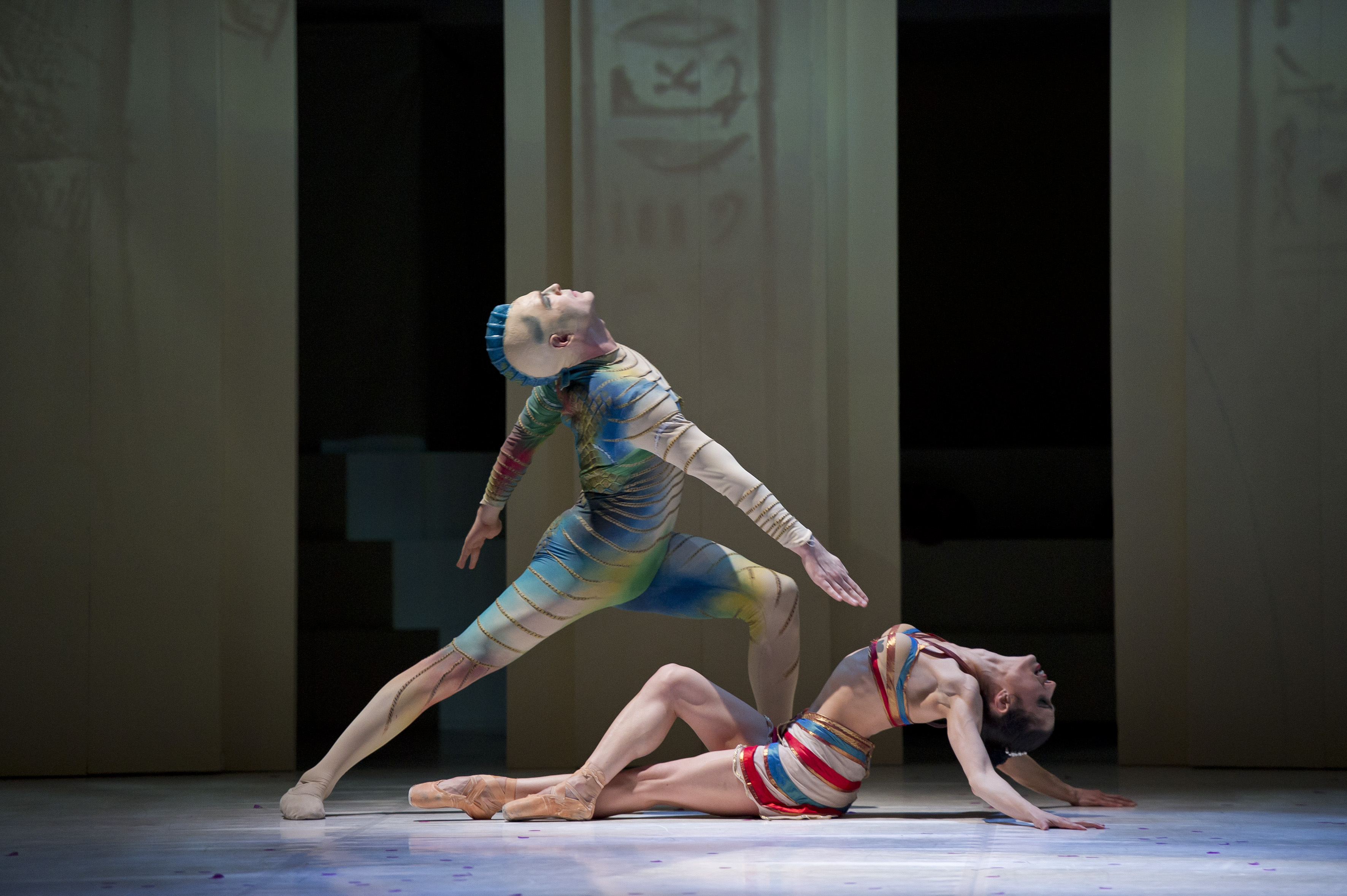 The legendary tale follows the power struggles Cleopatra – the last pharaoh of ancient Egypt – faced with her brother during their joint rule. His murder. Her relationship with Julius Caesar. Her love affair with Mark Antony. And, finally, her death as a result of poisoning from an asp bite.

Antony and Cleopatra will always be known as one of theatre’s most extravagantly poetic pairings. Previous incarnations span the traditional Shakespearean tragedy to the iconic portrayal by Elizabeth Taylor and Richard Burton in the 1963 film. David Nixon’s ballet had a lot to live up to.

In the publicity material for Cleopatra, David Nixon explains:

“I’m portraying Cleopatra as a woman, a queen, a mother, a lover. I want the audience to understand her as a human as much as someone going to lead a country. She possessed a quality that could engage men and hold them, and I’m hoping to somehow create that kind of charisma, and at the same time let the audience know this was a woman who had children, who was trying to protect them.”

For such an iconic role, then, the principal dancer must be assured and expressive, able to give a nuanced performance as Cleopatra grows from a young girl to a mature woman.

This characterisation is encapsulated by Martha Leebolt in the title role. Her lines are sharp and her performance athletically powerful yet still sultry. Strength, elegance and regal presence positively exude from her pores and she cuts a dramatic figure throughout the posturing choreography. 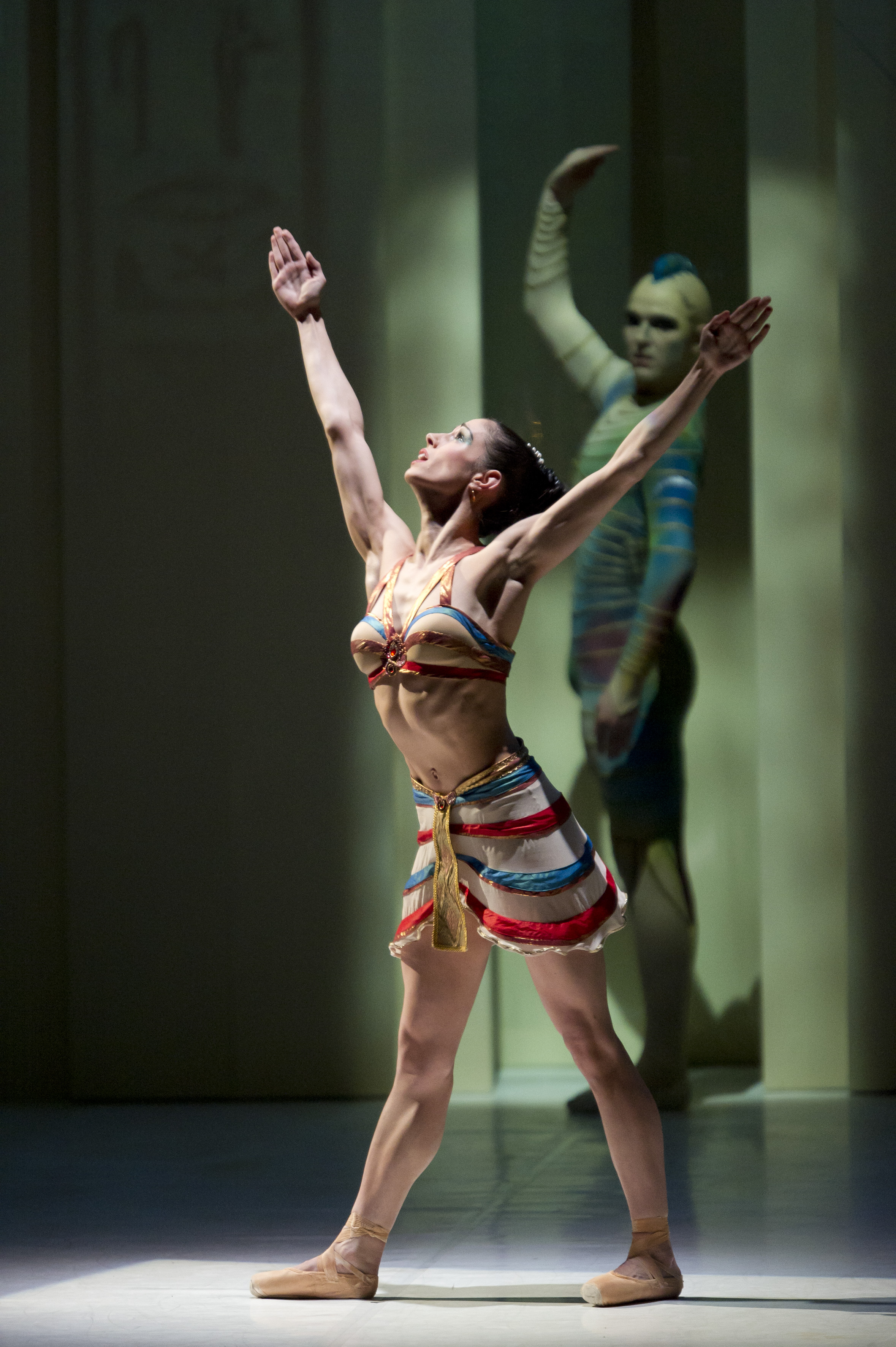 The ballet opens with Cleopatra at the moment of her death, crouched in a rectangle of light, shadowy pillars looming behind her as she summons the snake-god Wadjet to kill her. The story is then told through a series of flashbacks, with Wadjet accompanying the Pharaoh Queen through the crucial events (and relationships) of her life.

Kenneth Tindall as Wadjet is captivating. A series of undulating movements illustrate his role as a snake and his coiling body is costumed in a skin of green-blue-gold.

Nixon doubles up on characterisation and keeps the story ever-moving by having the slippery serpent shadow Cleopatra throughout the production. Nixon’s companion for Cleopatra represents both the snake that ultimately kills her and the household god of the Pharaohs.

As the narrative develops, we observe the incredible icon in interaction with her brother Ptolemy and love interests Caesar and Mark Antony.

Ptolemy is portrayed by Giuliano Contadini. He gives the role of the ten-year-old king a perfect child-like petulance. The impressive Javier Torres smoulders as the worldly, masculine Caesar. Tobias Batley has a powerful gravitas and athleticism as the Roman aristocrat Mark Antony.

Stunning pas de deux moments make the most of the soloists’ technical ability and chemistry and include some breathtaking lifts. The choreography is engaging and evocative of ancient Egypt with arched backs and flat hands. 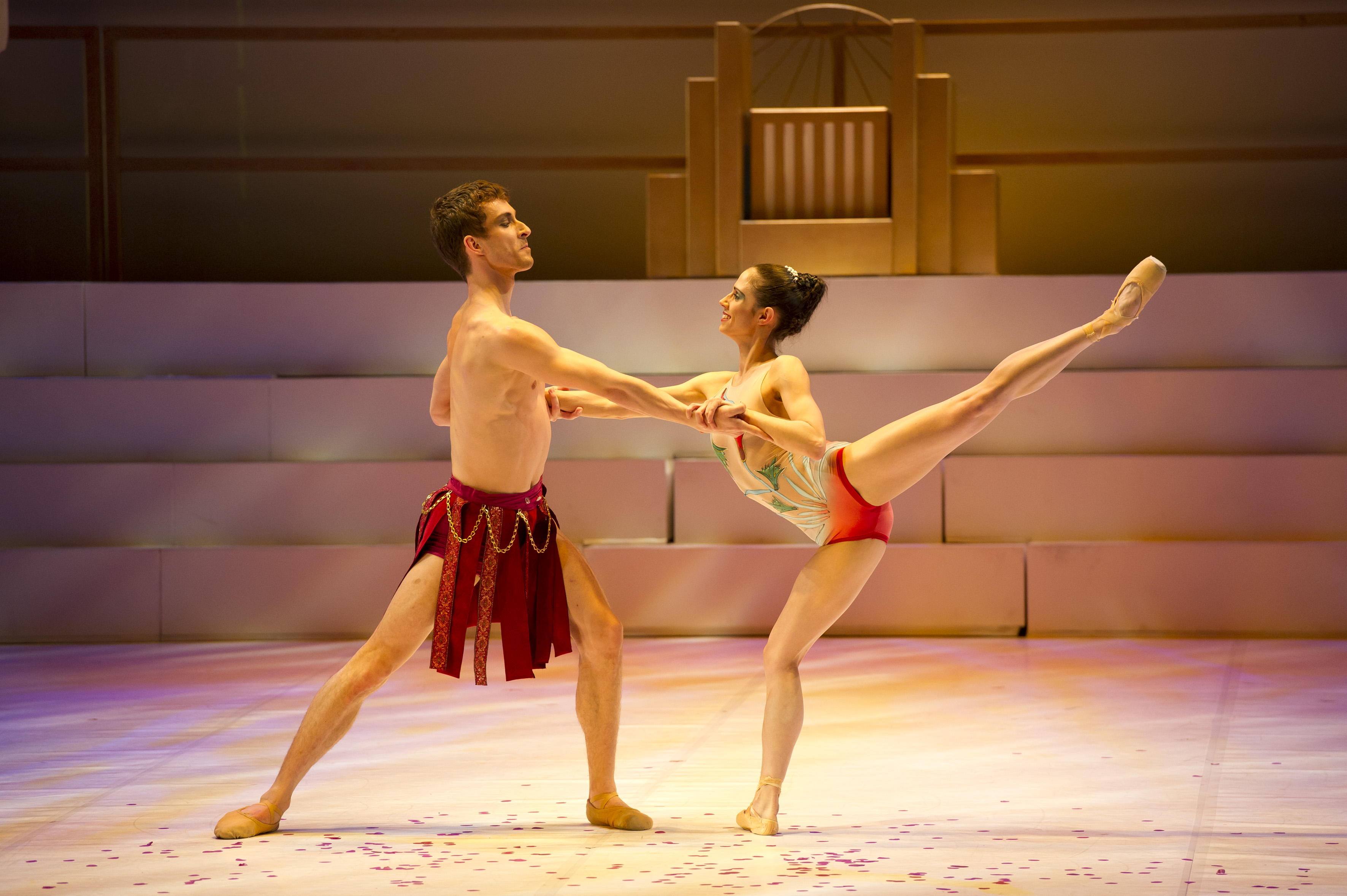 The corps de ballet dancers play multiple Roman and Egyptian roles. Simple but effective choreographic quirks differentiate the abstract elegance of the Egyptians and the powerful force of the Romans. The Roman centurion sections best showcase the excellent male dancers of the Company. The staging displays both their heroic leaps and muscular upper bodies.

Claude-Michel Schonberg has created a wonderfully hypnotic and glamorous score. The music is at its most effective in the scenes depicting Egypt. Flutes and rattle effects completely transport the action to the land of the Pharaohs.

Admittedly, it is ambitious to claim that the ballet has managed to tell the story of the woman herself rather than via her relationship with the men in her life. The three acts do ultimately centre around Cleopatra’s relationship with her brother and two lovers.

Nonetheless, the iconic character is compelling. Throughout the whole show the language of the dance beautifully conveys the power negotiations between Cleopatra and the men.

The production successfully summons all the splendour of ancient Egypt and I left the auditorium immensely satisfied. In essence, Cleopatra offers a lasting impression of exhilaration from a company that always tells a story by delivering strong classical ballet technique with an inventive, modern edge.*