Vincent and Flavia have been dancing on the BBC’s flagship show for six years but Midnight Tango is their first proper foray into theatrical performance. When they left the ballroom behind during the most recent break between seasons on Strictly, Milton Keynes Theatre was one of the venues they chose to visit.

The breathtaking show – complete with first class tango routines, drama, comedy and pure unadulterated passion – is produced by acclaimed choreographer and So You Think You Can Dance judge Arlene Phillips and features ten of the finest tango dancers in the world. An internationally renowned tango band accompanies them, providing intoxicating tango rhythms. 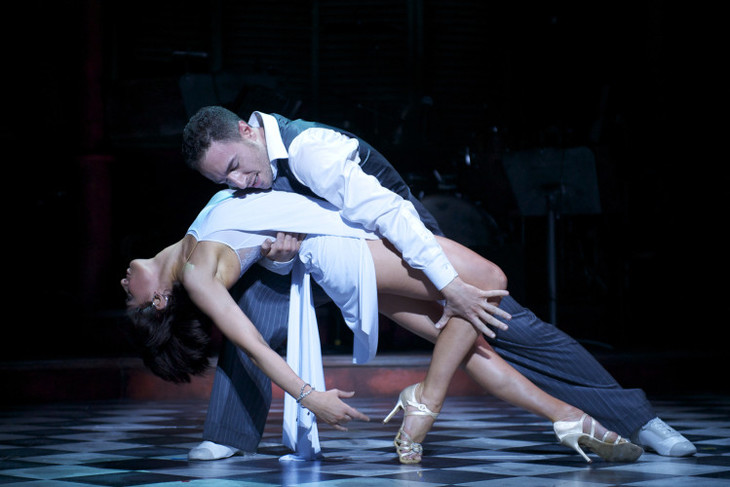 As I settled into my seat in the airy auditorium, a sense of eager anticipation filled the air. What were we to expect from the dynamic duo? Intricate footwork and sizzling chemistry seemed a dead cert but would the evening be akin to the routines we see on our television screens?

The stage is ready for action with a striking set depicting a Buenos Aires bar. When the business day is over the late night bars in the city of Buenos Aires come alive and the show begins as the middle-aged bar owners arrive to set up for another night. They are shortly followed by the influx of an entourage of couples who pick tables, order drinks and take to the floor to dance the night away with their partners.

The men are dressed in suits and ties with braces and trilby hats, while the women are costumed in smart separates or cocktail dresses. Temptation, passion and jealousy are in the air as the couples eye each other up and it becomes clear that this is not a Strictly spin-off but a bona fide theatre production … an authentic Argentine tango show.

The scene is set for the stars to arrive and Vincent and Flavia make their entrance with some spectacular choreography, showcasing their passionate chemistry. They perform daring moves with a sense of intimacy and enthral the audience from their very first sultry steps.

There is no dialogue in Midnight Tango but it effortlessly conveys two parallel love stories: one of youth and one of middle age.

The main narrative follows one young couple – Sofia (Cacace) and Pablo (Simone) – as they meet, dance and fall in love. When Sofia (Cacace) flirts with another man, the seeds of jealousy are planted and the men fight for her honour. Beautiful, glamorous and hopelessly in love, the dancing sparkles the most when Flavia and Vincent are centre stage.

The secondary narrative is the love story between the two bar owners. These characters provide the comic turn with their neat performances littered with slapstick antics and some compellingly tender moments as the ‘old married couple’. Their sweet-natured, light-hearted side story raised a few laughs between the moments of intense passion experienced in Pablo (Simone) and Sofia’s (Cacace) central love story.

However, the narrative plays second fiddle to the practically continuous, high quality, dancing. And so it should. The entire Company will blow you away but the fabulous Flavia and vivaciously vain Vincent command the stage. They were born to dance together and deliver tantalising tango of the highest quality. Argentine tango combines technical complexity and flair with expressive storytelling. Vincent and Flavia perform the gravity-defying leans and impressively intricate footwork with grace, fluidity and precision. I was transfixed.

Midnight Tango transports us to the unique night-life of Buenos Aires, where the heat and excitement of a love triangle is perfectly captured in an explosive fusion of dance, drama and music.

Midnight Tango will return to Milton Keynes Theatre in July 2012. My advice for all dance fans is to book your tickets now for this “strictly” sensational Argentine tango triumph!