Northern Ballet always offers great storytelling but the company’s latest offering has such a strong narrative flow that the glossy printed programme is simply a lovely souvenir, rather than a necessity to follow the plot.

Beauty and the Beast incorporates a distinctly less challenging storyline than the company’s previous show, Cleopatra, and the production embodies the fairy tale with a romantic eloquence. This a classic story, one that balances the forces of good and evil and emphasises the overarching theme that love can conquer all. 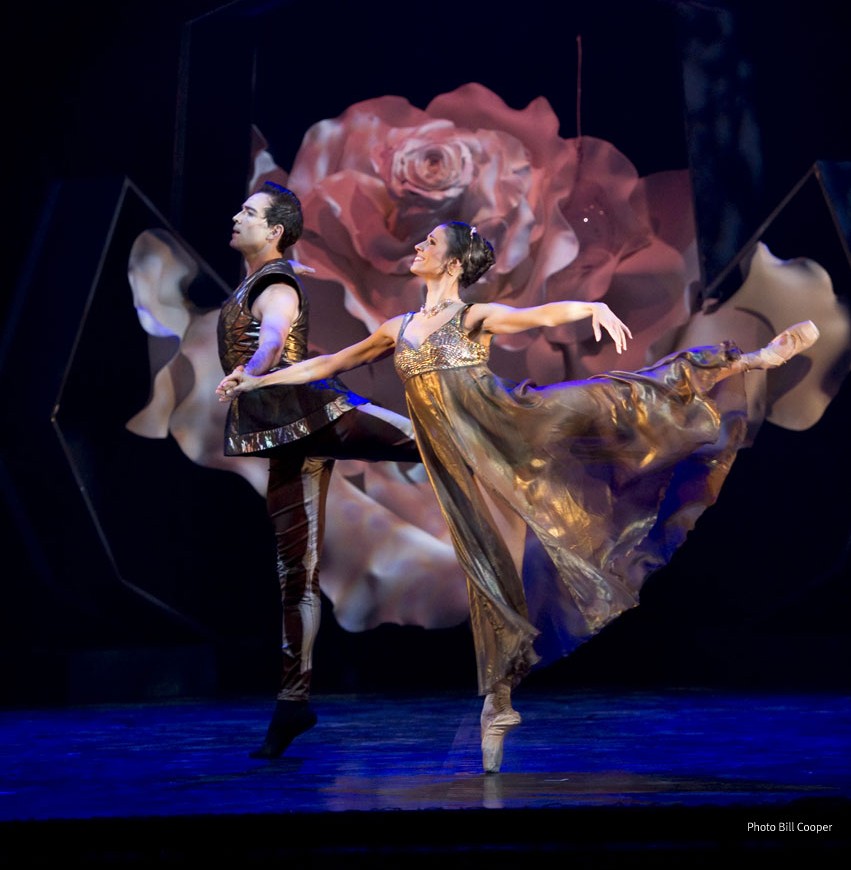 Thinking back to my childhood, the Disney film conjures up images of that splendid sunshine yellow dress, a hairy beast and the final scenes as Beauty and her Beast twirl around the ballroom dancefloor. Meanwhile, the most recent incarnation of the Gabrielle-Suzanne Barbot de Villeneuve story is the film ‘Beastly’. This movie sets the action in an American high school where the themes of vanity and superficial beauty are pertinently played out.

David Nixon has taken a conventional approach to the story, suggesting that the handsome Prince Orion must learn humility by being rendered ugly and find someone to love him for who he is, rather than what he looks like. What makes this production stand out is the style of the interpretation. The sets, haute couture style costumes and choreography combine to enchant and entertain the audience in equal measures.

Northern Ballet’s future funding has been cut but Nixon has staged his new production with an opulence that defies this loss. Each act opens with a stunning tableau. The curtain rises to depict a mirrored room of a castle, in which the vain Prince Orion (Kenneth Tindall) is seen surveying his image with delight. Later, we see the naive Beauty sitting in the Beast’s castle, while he watches her with a yearning from within a shining cage.

Martha Leebolt creates perfect lines with an effortless elegance embodying the role of Beauty while the animalistic nature and tormented anguish of the Beast is powerfully portrayed by Ashley Dixon.

The storytelling has the simple expressionist quality of a silent movie, the narrative unfolding seamlessly. The scene-setting at the beginning of the production shows how our Beast-to-be preens and enjoys being shallow, pretty and popular with his entourage, effectively communicating his incredible ego and ultimately exposing the monster he is inside. Hence, it seems only fitting for a fairy, La Fee Magnifique, to cast a spell upon the Prince, transforming him into a wild beast.

Offering a reprieve to Prince Orion, a second fairy enters – sister to La Fee Magnifique – La Fee Luminaire. Costumed in a flowing, silver, foil-like dress, she approaches the Beast and drops a rose in front of him. She tells him that her sister’s spell will be broken if he can learn to love and be loved in return. 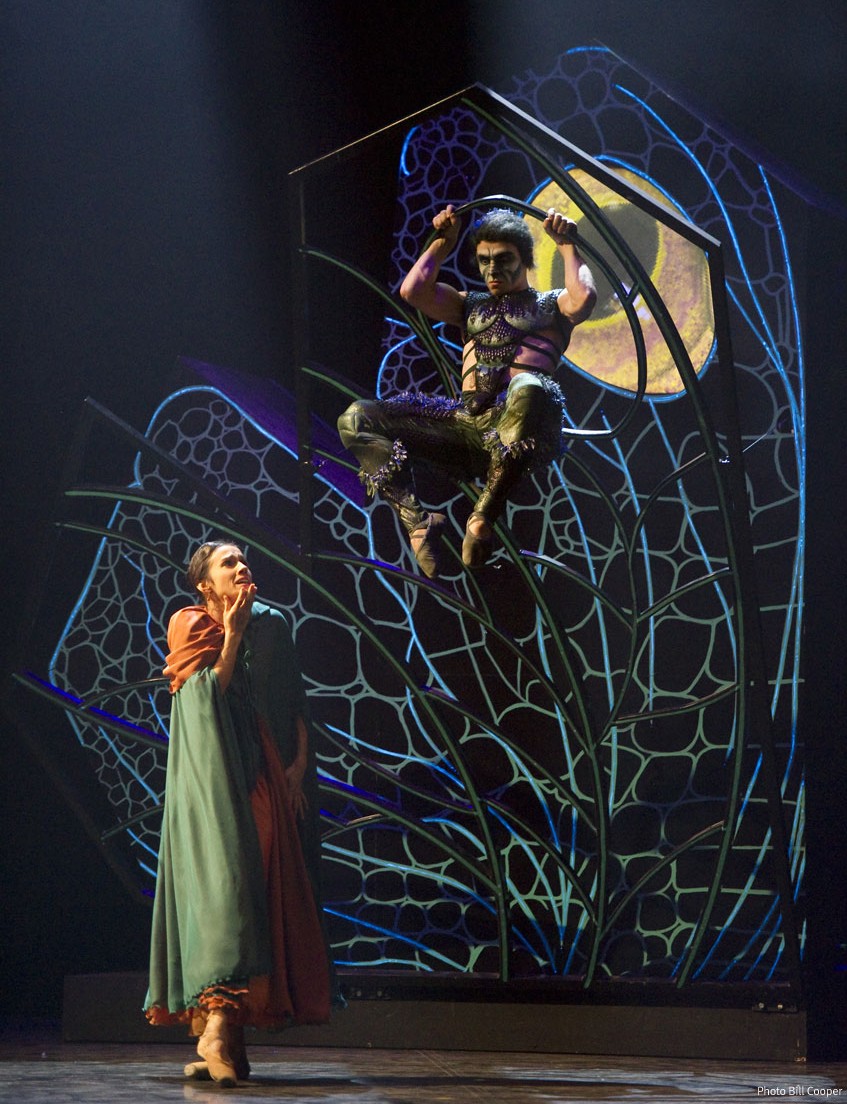 The curtain only goes down during the interval and at the finale, meaning that shifting scenes must be easily integrated into the drama, with themes blending into each other. As a result, wall hangings become packing crates, a vehicle becomes a home (watch out for the amusing washing line which pops up) and a white rose becomes a bed as we travel through the narrative. This ensures that no scenes are simply an excuse for indulgent production wizardry. Indeed, every prop and backdrop helps to drive the story on.

This minimal but multi-purpose theme is accentuated by the eerie walls of the castle, which close the setting in, creating an uncomfortable and scary environment for the Beast to reside in, but also act as a choreographic prop.

Northern Ballet productions often incorporate climbing on sets. For this piece, the Beast displays his untamed nature by clambering up the walls in frustration before pouncing down to the floor, startling the gentle Beauty.

Despite the gothic overtones – created through a series of cracked, distorted mirrors and the gloomy, shadowy lighting – there is enthralling buoyancy to this production. The morality embedded in the tale is projected through sharp characterisation and given a quirky lift by the addition of clever references to our contemporary superficiality.

The older sisters of title character Beauty are portrayed as socialites. They enter in their finery, clutching boutique shopping bags and shadowed by maids weighed down by more bags and boxes from their spending spree. Meanwhile, Prince Orion preens before three adoring admirers in a scene that could have come straight from one of the reality-drama shows so often broadcast on our small screens. The crowd of trendsetters who compete for Beauty’s attention could equally be mistaken for the kind of well-turned out characters shown in teenage soap Gossip Girl.

The allusions to our modern obsession with looks and material things continue as several men in black confront Beauty’s father with an enormous bill to pay and an official paper notifying him that he no longer has any money. As all the possessions and the house are surrendered, the party guests offer no help and Beauty’s sister’s tantrums offer a comedic element to a scene which results in the family left destitute and desperate. 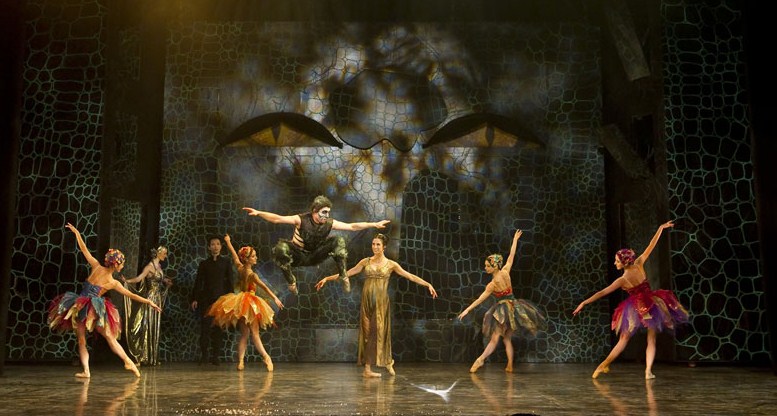 Characterisation of the Beast is extraordinarily conveyed by both choreography and the expressiveness allowed through the simple half-mask costume design. He shows a naive trust for his beloved Beauty but remains prone to sudden, violent eruptions of rage.

The dream sequence pas de trois – a choreographic feature also used to great effect by the company in Cleopatra – depicts Beauty and the Prince as he once was. They dance a love duet while the Beast executes wild jumps and writhing floor-work in agonising despair. The combination of stunning partnering and the sad, ugly Beast looking on evokes the kind of emotional complexity that sweeps the audience into the narrative.

There is plenty of humour, too. The Beast’s goblin minions channel a Quasimodo-esque style. They demonstrate a mischievous evilness as they romp about the stage in formation, using synchronised movement and waving their rear ends at the audience.

Featuring music compiled from a number of different and familiar sources, the score and choreography blend beautifully. It is hard to believe that this production has only just been created – it feels like a classic. Woodwind-based themes from Francis Poulenc descend into an organ-fuelled piece, evoking the atmosphere of horror found in ‘The Phantom of the Opera’. Later, the rousing cymbals and oboe themes featured in the celebratory finale allow the Northern Ballet Sinfonia to accompany the dancing onstage beautifully.

In the stunning rose garden scene, as Beauty eventually falls for the Beast, the sets really come alive. Flowers burst into bloom across the stage and a quartet of dancers don brightly coloured tutus and rose-covered headdresses that look like shower caps.

This charm is then complete with a triumphant golden finale as the company’s male dancers take to the stage and show off some resplendent classical choreography to celebrate the couple’s true and lasting love.

Ultimately, Beauty and the Beast is a spectacular fairy tale ballet, full of simple drama and romance which will warm the hearts of everyone who sees it. Personally, the only criticism I have is that the wonderful finale meant the curtain had to come down. We were forced to leave the auditorium and, with it, the magic, movement and music we had enjoyed all evening.