Set during Prohibition, the international award-winning musical (boasting six Tony, two Olivier, one Grammy, two BAFTA and six Academy awards) is on tour until December and the stars are bringing “the old razzle dazzle” to Milton Keynes Theatre this week.

Lucky enough to be in the audience for opening night, I was quickly transported back to the roaring twenties. And I was hooked from the very first explosive entrance and titillating dance routine. 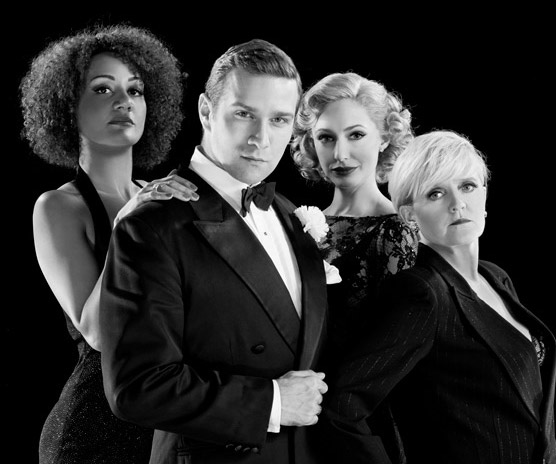 The story  – based on real-life events – is a satire on corruption in the administration of criminal justice. It features one instantly-recognisable, show-stopping song after another, performed by a cast of colourful characters. Nightclub singer Roxie Hart (Strictly semi-finalist and Burn The Floor star Ali Bastian) shoots her lover after a spat and – along with her Cell Block rival, double-murderess Velma Kelly (Corrie’s Tupele Dorgu) – fights to avoid death row with the help of smooth-talking lawyer, Billy Flynn (Stefan Booth of EastEnders and The Bill fame).

Chicago uses its two strong leading ladies to explore the concept of the infamous celebrity criminal (decades before our media-saturated obsession with those in the public eye).

Money-driven Billy Flynn fights to make a celebrity of latest client Roxie. He demands a huge sum to court the press in order to win sympathy, sway public opinion and help her avoid becoming the first ever female to be hanged. With competition for his attention from Velma and the constant distraction of other murderesses – whose back-stories are perfectly explained in the brilliant Cell Block Tango (‘He Had It Coming’) – rivalry for Billy Flynn’s attention is fierce.

Tupele Dorgu is larger-than-life as the vaudevillian Velma. Her kooky, energetic performance lights up the stage. Known for her role as Kelly Crabtree (“Legs”) on the cobbles of Coronation Street, Tupele shows off her singing prowess (and those endless legs) as she struggles to maintain her Queen Bee status among the inmates. With perfectly pitched comic-timing and wonderfully expressive facial expressions, Tupele makes Velma the murderous madam you just can’t help but love.

Ali Bastian portrays Roxie Hart as the potty-mouthed small-town girl unhappy in her boring marriage with confidence and aplomb. However, for me, Tupele’s energy did seem to overshadow Ali by just a fraction. Nonetheless, I thoroughly enjoyed Ali’s performance as the philandering poppet trying to justify her extra-marital affair and subsequent crime (all while getting her name “out there” in the pursuit of fame by any means possible). Admittedly, Ali did cope slightly better with the Fosse style dance moves than Tupele.

In this universal tale of fame and fortune, we need a slippery character to make us question the morality of the situation. Step forward Billy Flynn. Professing to only care about love (in ‘All I Care About’) Billy is actually doggedly money-driven and a professional when it comes to smooth-talking. Stefan Booth takes the role perfectly with slicked-back hair, slick suit and a slick attitude. This persona is miles away from his latest incarnation on EastEnders as the down-trodden Greg.

Touring aficionado Bernie Nolan, too, encapsulates the droll, corrupt character of Mamma Morton (‘When You’re Good To Mamma’) who presides over prisoners in Cook County Jail and believes all favours she gives should be reciprocated.

The stylised, cynical sexuality of Bob Fosse’s distinct choreographic style oozes from the very pores of the ensemble dancers in Chicago. They certainly flashed their quota of naked skin throughout the evening in their pared down, stripped-back black costumes. Uninhibited, the male and female members of the ensemble kept the underground, sensuous and sexy ambience alive, accompanied by clever lighting on a simple set.

The whole show is enacted with very few props. Singing, dancing and all-round performing is what communicates the story in this musical. Drama is added with the use of swing ladders at the sides of the stage – exploited for great comic effect by the two leading ladies.

There is an ease and openness about Chicago. The jazz orchestra features on a raised platform on-stage, the cast members switch roles to act out back-stories and lead characters interact with the musicians in the orchestra. The audience was so professionally entertained that when it came to curtain calls, I was desperately hoping for another rendition of a show-stopping tune. Alas, it was not to be.

Chicago has all the sins, the sex, the satire and the slapstick needed for a quality evening at the theatre – and you’ll be humming the tunes for days afterwards.

There’s a nightclub singer, a double-murderess, a smooth-talking lawyer and a cell block of sin ready and waiting to entertain you. It really would be a crime to miss all that jazz!