The story focuses on American life after the First World War, when the United States and much of the world experienced huge economic expansion. This surging economy meant easy money, hard drinking (flying in the face of Prohibition) and lavish parties.

Peripheral narrator Nick Carraway moves east to New York’s Long Island in the spring of 1922. Here, he rents a house in a wealthy but unfashionable area populated by the “new rich”. He is soon drawn to his mysterious neighbour Jay Gatsby – a millionaire with a secret past and a penchant for lavish parties and beautiful women.

Nick spends time with his cousin, Daisy, and her husband, Tom Buchanan. He meets Tom’s mistress, Myrtle, and has a tentative romance with pro-golfer Jordan Baker. And he gets to know Gatsby, which prompts him to reflect upon just how empty life among the wealthy can be. Ultimately, behind the optimism and frivolity of the decadent Jazz Age, hypocrisy and shallow recklessness pervade.

In the novel, Tom is described as “sturdy” with a “rather hard mouth and a supercilious manner”. On the stage, it is immediately clear that Tom (portrayed on opening night by Kenneth Tindall) is the “baddie” of the piece. His “woman in New York” is Myrtle Wilson, who the prose describes as having “an immediate perceptible vitality about her as if the nerves of her body were continually smouldering”. In light of this, Victoria Sibson as Myrtle gives a stand-out performance. She dances with reckless abandon, filling the stage with her desire to break free from the social class she has married into (seeing Tom as not only a lover but a step up from her husband, mechanic George).

The defining choreography for Daisy (Martha Leebolt) focuses on her pretty, prim and proper socialite standing (plenty of delicate arms and graceful chaîné  – connected – turns). This contrasts cleverly with the choreographic motifs attached to Jordan (Hannah Bateman) and her assertive, assured personality. Athletic Jordan moves in a much more relaxed way to dainty Daisy.

Nick Carraway is the first-person narrator in the book, slightly on the outside of the social group, looking in. A pas de trois between Jay Gatsby (Tobias Batley), Daisy (Martha Leebolt) and Nick (Giuliano Contadini) captures the essence of Nick’s role. 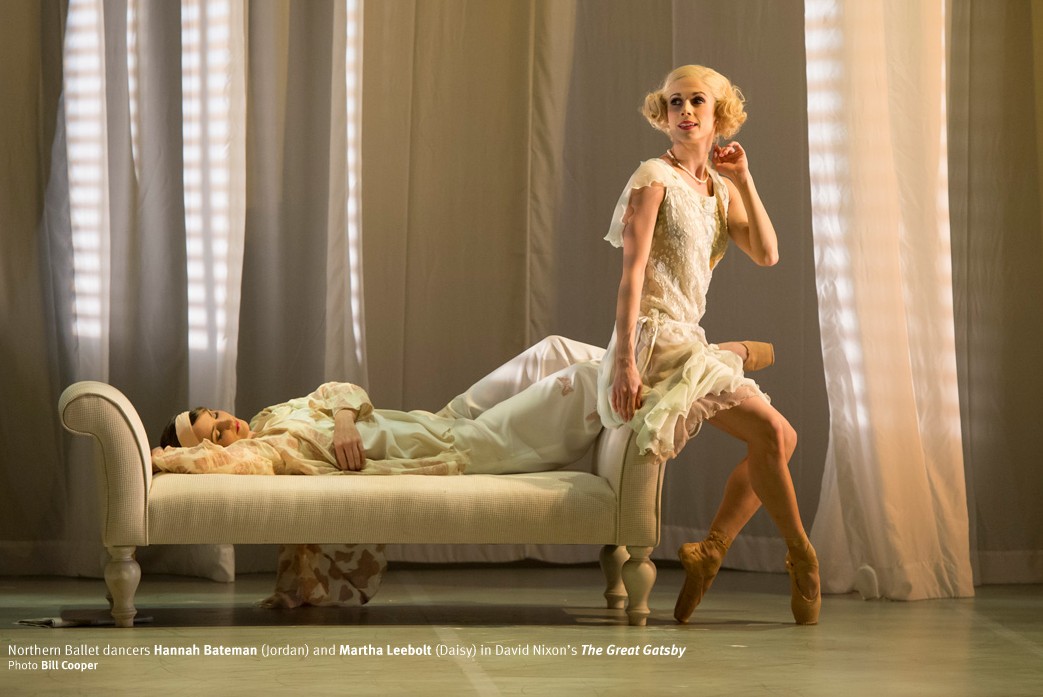 As a narrator, Nick is both disapproving and admiring of Gatsby’s excesses. Seemingly an innocent bystander, Nick is actually integral to the story. He ensures the reunion of Daisy and Gatsby and his reflections upon events are what cement the themes of the book (social class, love, deceit, memory, morality, the American Dream). Fittingly, the pas de trois just before the end of Act 1 shows Nick safely seeing Daisy reunited with Gatsby.

Similarly, in the novel there are imaginings and acts of re-telling as Nick presents events as they appeared to him at the time. There are also sections where he offers his own interpretations of the story’s meaning and the motivations of the other characters. In this production, the use of a “Young Jay” and a “Young Daisy” in memory sequences allows the narrative to explore the past in a similar way.

Generally, turning ballet dancers into 1920s partygoers is a clever move. The fashion and etiquette of the time involved polite partying with poise and oodles of style – conduct easily mastered by Northern Ballet’s dancers. They effortlessly embody the roles of high-society flappers and well-groomed gents.

Company dancer Sean Bates, who is from Milton Keynes and trained at The Royal Ballet School, performs in joyous group scenes as a party guest. He impresses with some powerful jumps and strong grand jetés (leaps). 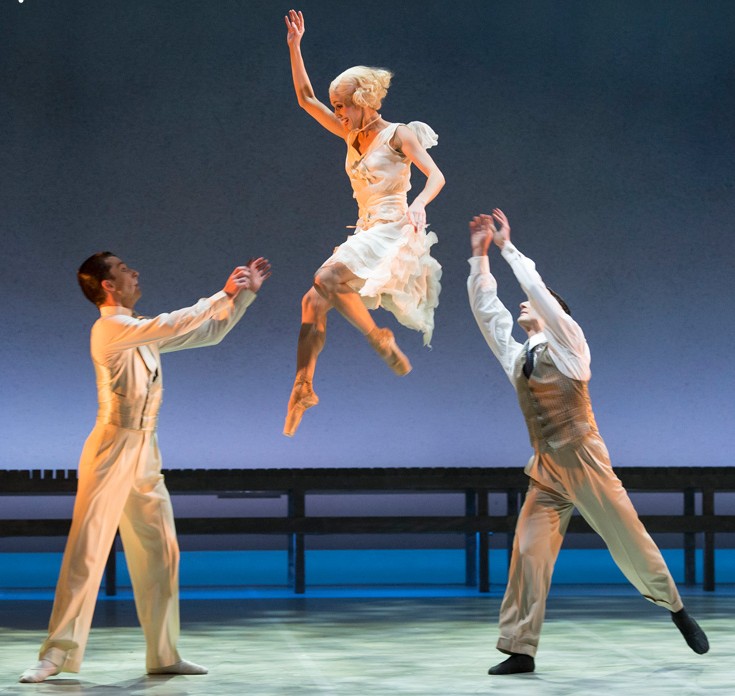 Jérôme Kaplan’s stunning sets and the chic costumes (designed by David Nixon, assisted by Julie Anderson) faultlessly depict time and place – particularly in creating the contrast between the elegant soirées and dingy garage. My only criticism as a fan of the book is that the infamous car does not play more of a part.

Transforming literature into dance is a fascinating but intimidating concept, particularly with a novel like ‘The Great Gatsby’, which boasts a complicated literary plot with many themes. The prose is full of observations that convey the longing for dreams that are, in truth, better dreamt than experienced in reality. Interpretation of literature into ballet must use these words and the tone for inspiration.

Fortunately, Northern Ballet specialises in narrative works (past successes include adaptations of Beauty and the Beast and Wuthering Heights). This production certainly encapsulates the Gatsby spirit. However, anyone completely unfamiliar with the story should consult the programme before the performance. Reading the brief synopsis will ensure the sublime dancing and stylish scenes are fully appreciated. 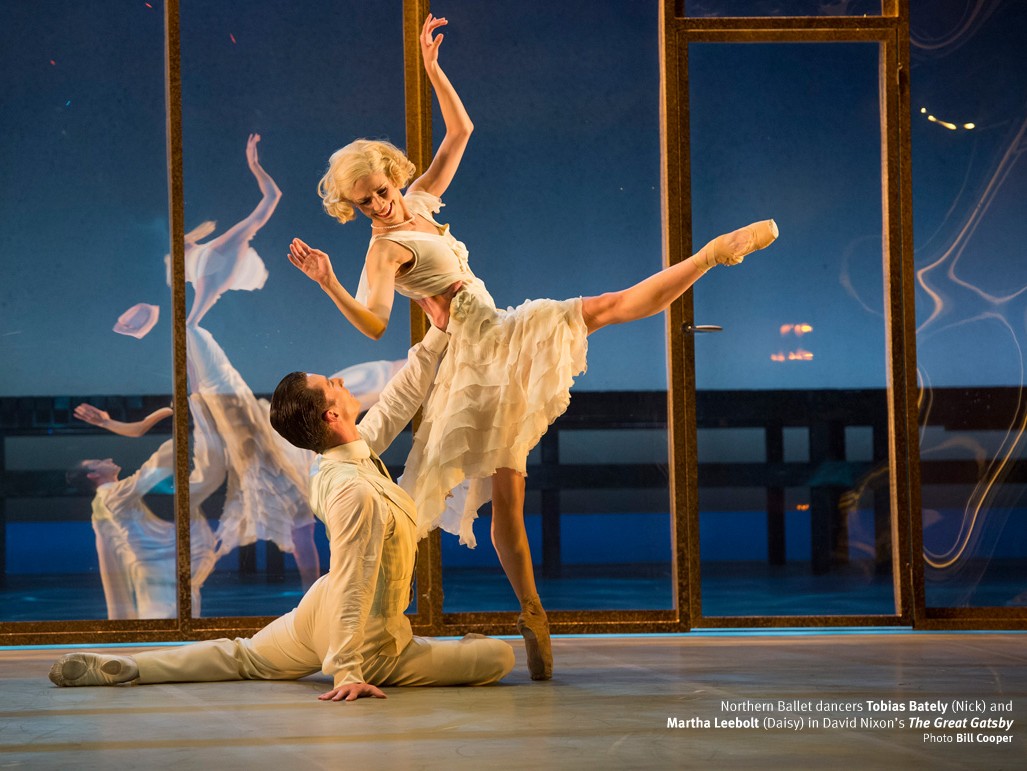 Update 25 May 2022: Read my review of Northern Ballet’s The Great Gatsby at Milton Keynes Theatre.