Hi-Ho, Hi-Ho, off to Panto-land we go with Snow White and the Seven Dwarfs!

Seven diamond-mining dwarfs and a handsome prince battle to save a beautiful princess from the tyranny of her jealous stepmother in this year’s seasonal spectacular at Milton Keynes Theatre. Snow White and the Seven Dwarfs is brought to life with charismatic characters, toe-tapping song and dance numbers and stunning sets – plus plenty of comedy. 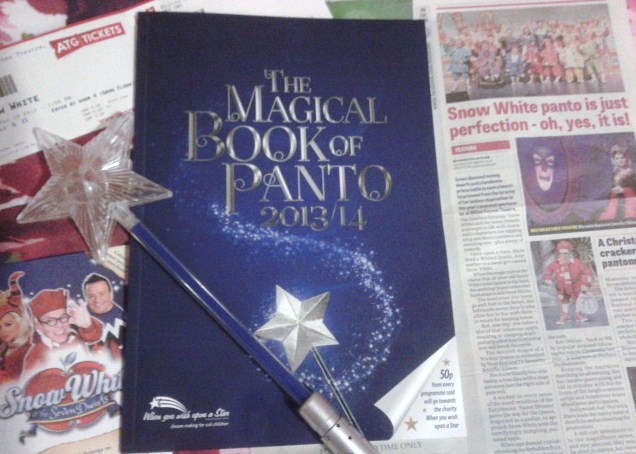 Once upon a time, there lived a Wicked Queen, stepmother to a sweet girl named Snow White. When the magic mirror declares that eighteen-year-old Snow White is the fairest in the land, the seething Queen orders her huntsman to kill Snow. The huntsman lets Snow go and, lost in the forest, she befriends seven dwarfs who allow her to live with them in return for keeping house.

Life is good until, one day, she takes a bite of that infamous apple, resulting in ‘sleeping death’. Only a first kiss from a true love will break the curse.

The devilish despot of a Wicked Queen is embodied by West End and TV favourite Jennifer Ellison. She is a brilliantly boo-able baddy, a true diva with a stage presence just the right side of pure evil. A wicked (in every sense of the word) rendition of the Eurythmics’ Sweet Dreams paves the way for the Queen, disguised as a pedlar, to approach Snow White with the terrifyingly tempting poisoned apple. When our damsel considers taking the forbidden fruit, there are heartfelt shouts of alarm from children in the audience as the vain villain proves she is truly rotten to the core.

Kev Orkian (back by popular demand following his role in Cinderella last year) is hilarious as Herbert the Huntsman. 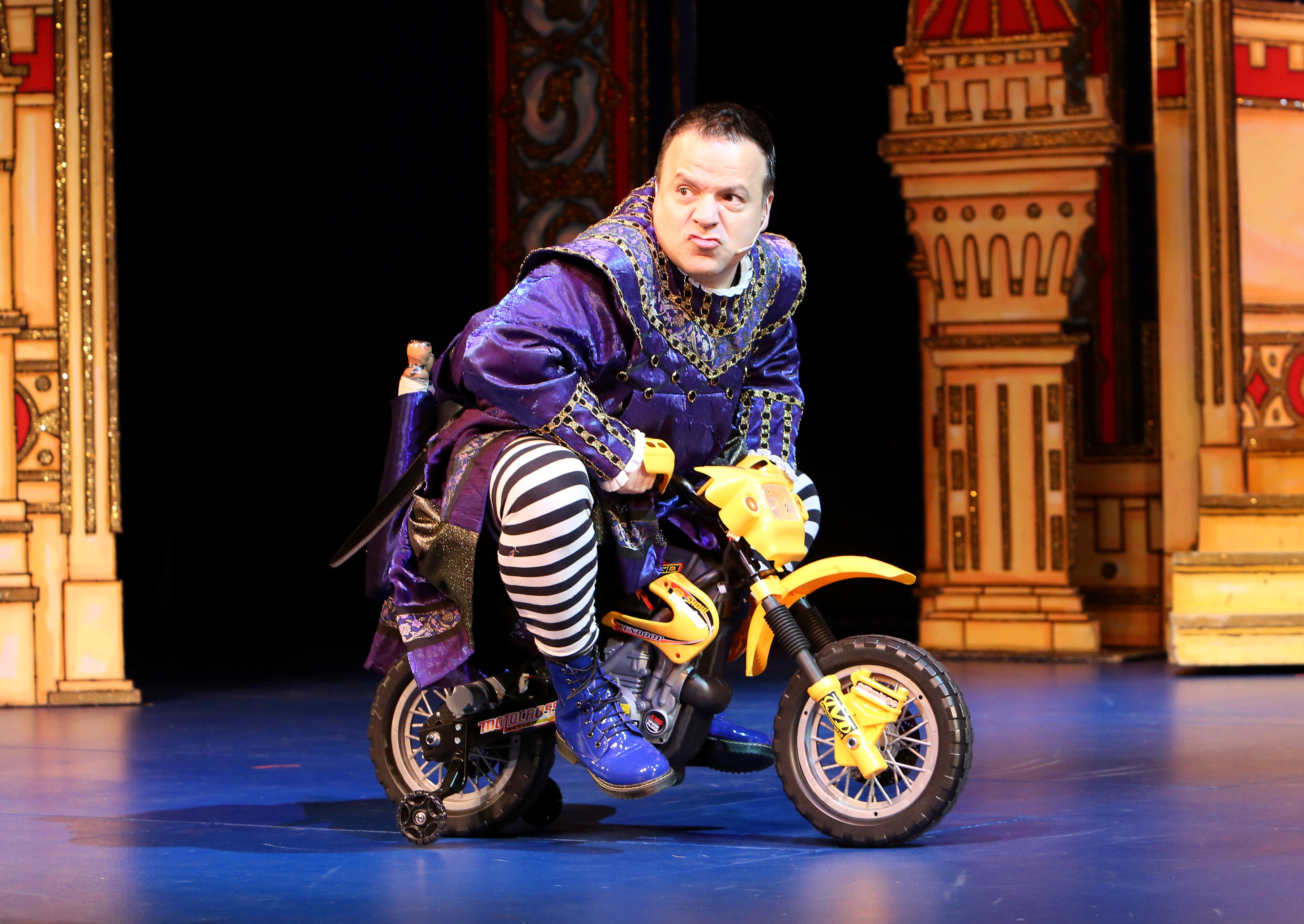 Keeping the narrative marching on all evening, Kev has theatre-goers young and old in stitches with his delivery of the laugh-a-minute script and boisterous bouts of audience participation. Kev’s Herbert is bouncy, lovable and impossibly funny – you can’t help but smile as soon as he appears onstage. How his co-stars keep a straight face (particularly Shaun Dalton, as the Prince, during a comical performance of I’m All Alone) is beyond me.

The multi-talented entertainer (comedian, pianist and actor) has recently become a father to twin boys and is set to perform his one-man show at Milton Keynes Theatre on Wednesday 8 January 2014. Busy, busy, busy!

Someone else who is always in demand is Hollywood superstar Warwick Davis. Consummate professional Warwick leads the merry band of dwarfs (as well as directing the production). 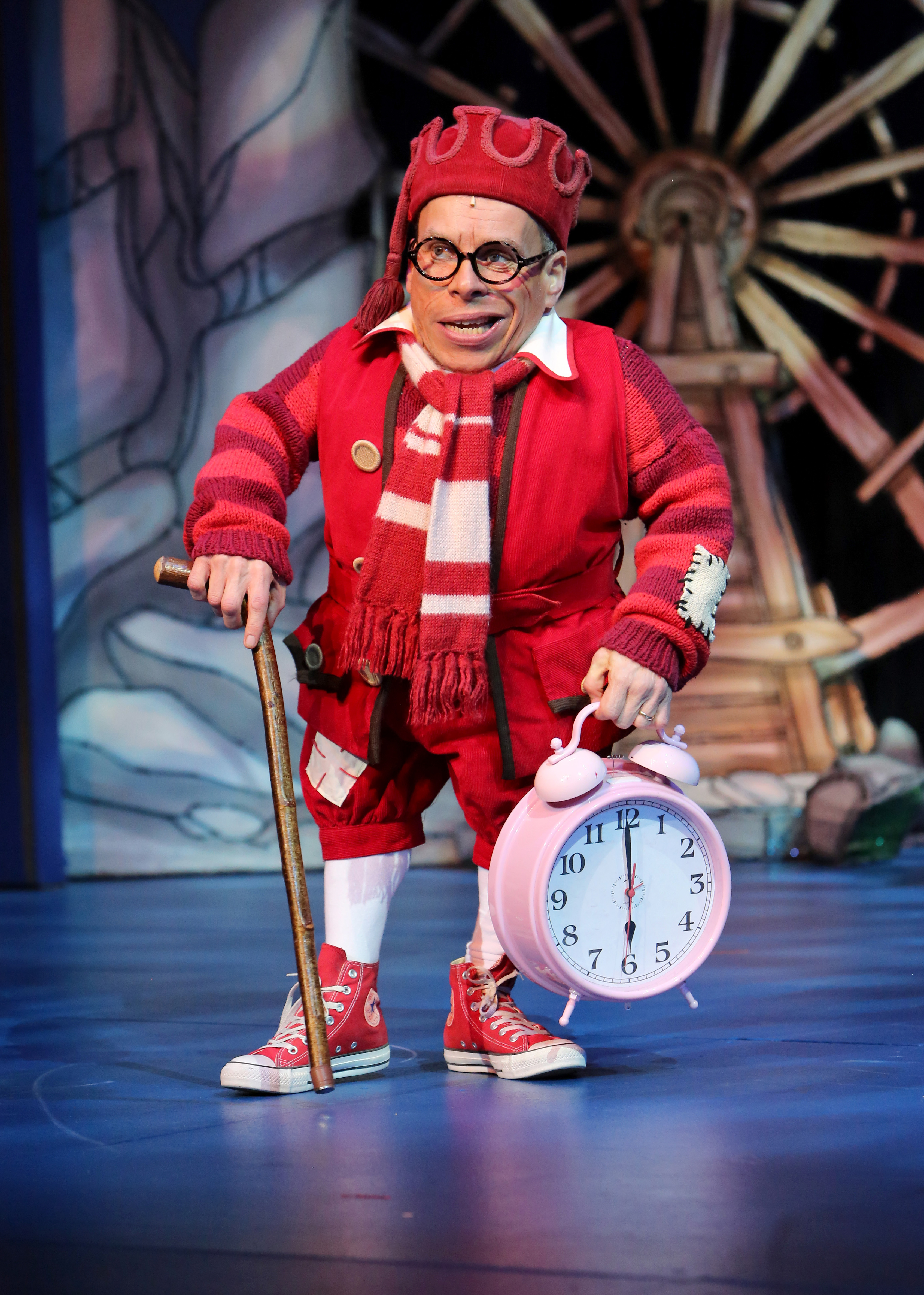 A roll call introduces us to the magnificent seven, and rest assured, they may be short in stature but these guys have huge personalities. There are titters of appreciation as audience members recognise the similarities between the monikers used for the dwarfs of Pantoland and those we remember from the classic 1937 Walt Disney film.

Disney has the copyright to the original names so we are introduced to Warwick’s ‘Prof’ (the show’s answer to Doc, and a role that Warwick is reprising after his last visit to Milton Keynes for pantomime in 2005), Loopy (Dopey), Cheeky (Happy), Blusher (Bashful), Grumbly (Grumpy), Snoozy (Sleepy) and Sniffly (Sneezy).

The dwarfs’ cottage is a charming, Disney-esque design, and all the sets perfectly capture the storybook feel.

Technological wizardry and special effects are carefully employed throughout to create a truly magical theatrical experience, for adults and little ones alike. 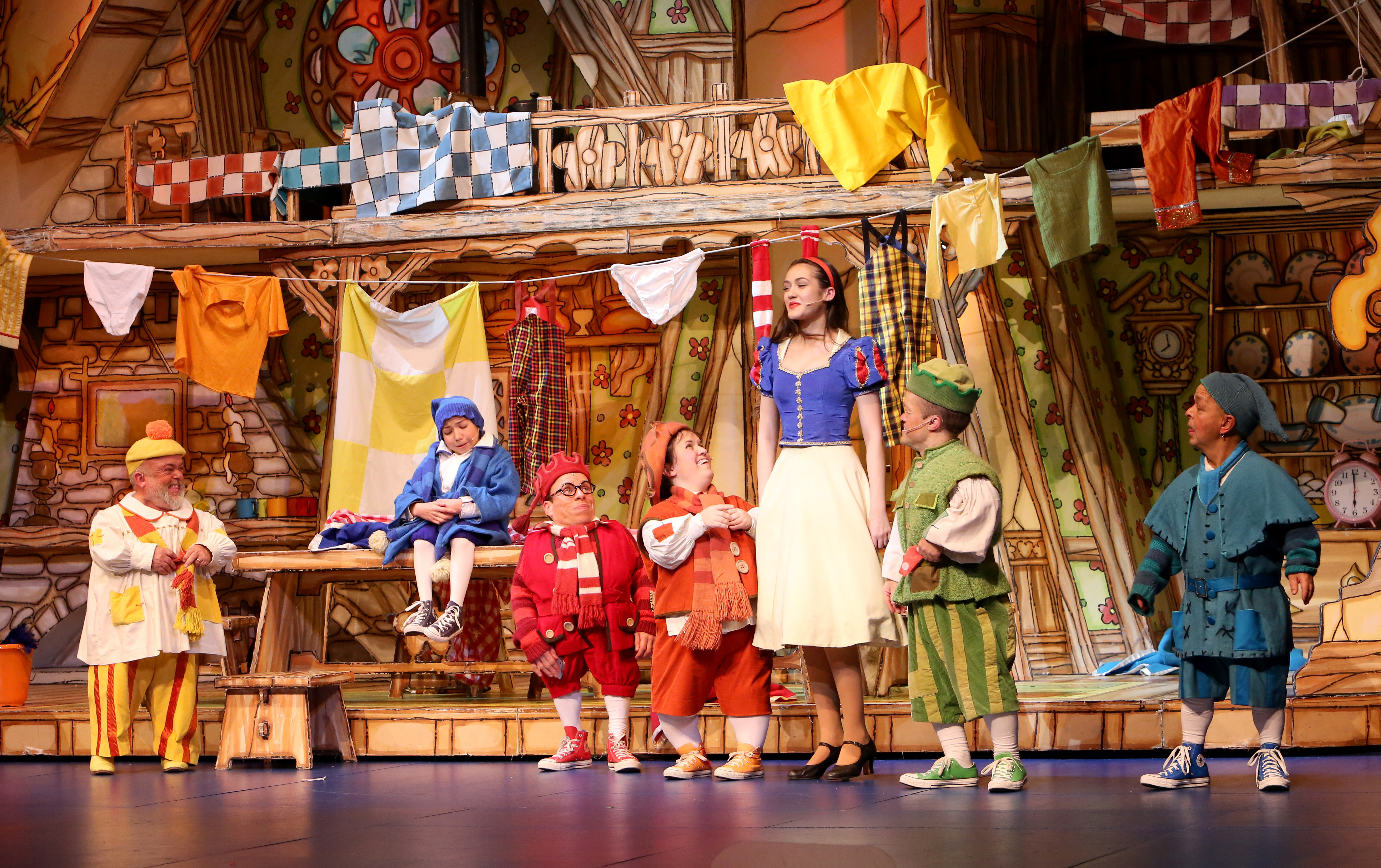 Shaun Dalton is our Prince – Prince Lorenzo, or ‘Lozzer’ as Kev’s Herbert calls him – who is making a pilgrimage across kingdoms to locate the ‘fairest in the land’. Fresh from starring in Les Misérables in the West End, he can definitely hold a tune. The debonair Prince sets out to win the heart of Kate Stewart (making her professional debut in the title role) and theirs is a perfectly pitched romance.

Costumes have been newly made for this production and the wardrobe department is to be commended as everyone – from the juvenile performers to the big stars – is superbly turned out.

Snow White and the Seven Dwarfs is a real Christmas cracker of a pantomime and perfect entertainment for the whole family. Expect your sides to hurt from laughing so much! With comedy moments aplenty, topical and local references and even an onstage moment for Milton Keynes’ favourite newspaper, this is feel-good entertainment at its very best.

A version of this review was featured in the Milton Keynes Citizen newspaper.

I also attended the official launch of this year’s pantomime in September 2013.