Christmas is a time for magic. Nothing is more magical than a trip to the ballet so I seized the opportunity to watch English National Ballet’s Nutcracker at the London Coliseum.

With a plethora of pantomimes on offer at the moment, those seeking alternative festive fare should pirouette their way to the capital to see English National Ballet’s stylish Nutcracker at the London Coliseum. Currently captivating audience members of all ages, this is the perfect seasonal show for the whole family.

Former Artistic Director Wayne Eagling’s interpretation of the timeless classic is set in a frost-covered Edwardian London winter, on an enchanted Christmas Eve.

Anticipation is in the air as Clara and her brother Freddie prepare for their family’s Christmas party. The Christmassy scene is set with some clever ice skating and the children attending the matinee performance are transfixed from this point on. 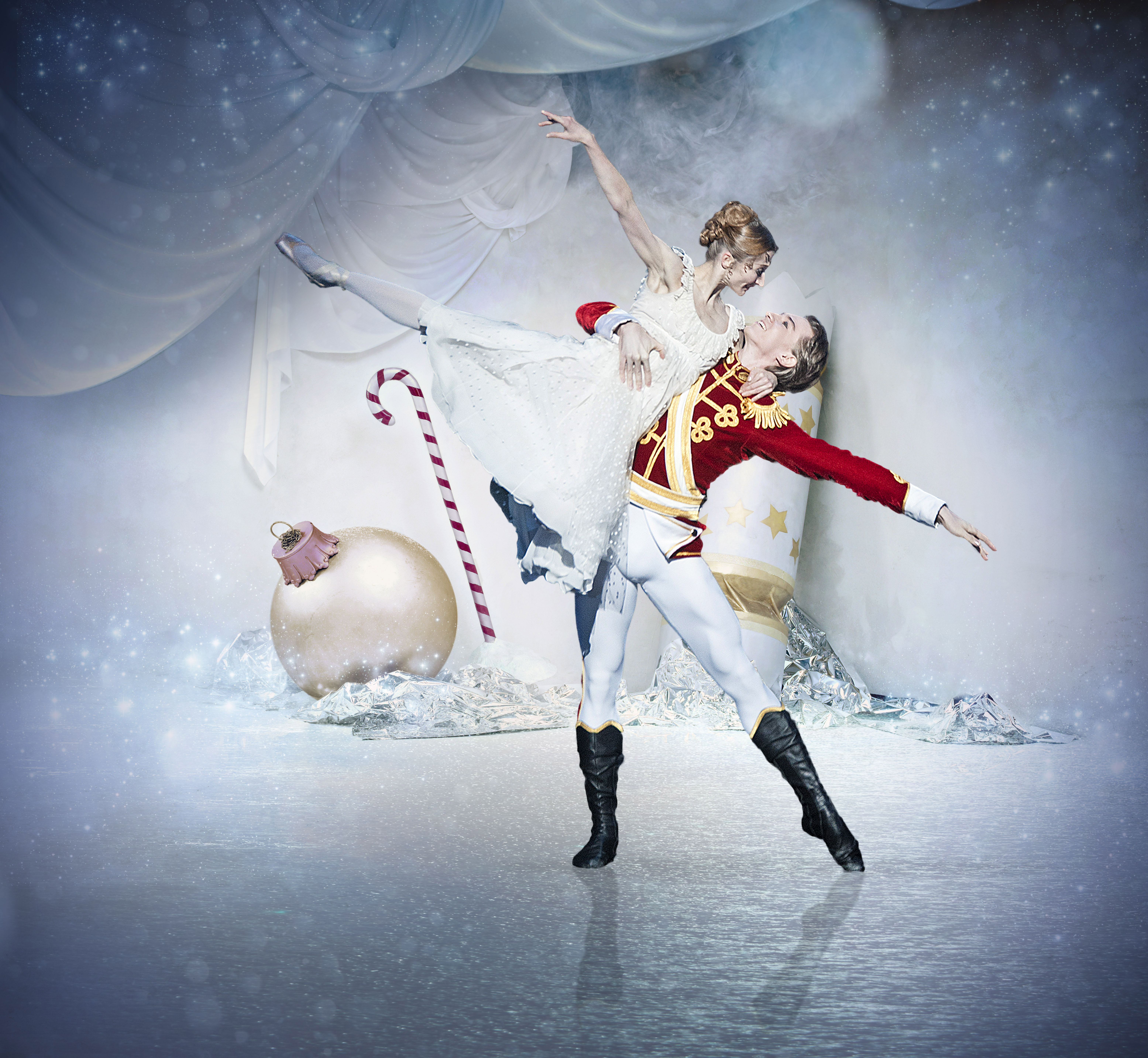 Guests dressed in their finery mingle elegantly at a party everyone will want an invite to. Soon, mysterious family friend Dr Drosselmeyer arrives with his handsome Nephew and Clara is sweetly smitten. The grandfather dance – inspired by the traditional final group dance at parties, danced just before it was time for the guests to go home – is full of merriment and gives scope for personalities to really shine. Students from Tring Park School for the Performing Arts are natural and animated as excited youngsters and the hubbub of a family gathering fills the stage (complete with magic tricks and puppetry courtesy of Drosselmeyer).

This Nutcracker sees two dancers play Clara, initially as a girl and, later, as an adult. Young Clara is presented with her Christmas gift from Drosselmeyer, a Nutcracker Doll, and dances happily before Freddie breaks it. Fortunately, Drosselmeyer fixes the doll and, as the guests leave, the children are sent to bed.

While Clara sleeps, the Evil Mouse King creeps on-stage, delighting and frightening younger theatregoers in equal measure. Clara has a nightmare in which her Nutcracker is attacked by the Mouse King and, at midnight, the living room becomes a battlefield. Staging is simple but we have the conventional growing (just a bit underwhelming) Christmas tree – a very green and brightly-lit fir set centrally, upstage. This transformation cues the entrance of the ‘grown-up’ Clara (an impressive Laurretta Summerscales in the matinee performance that I attended). 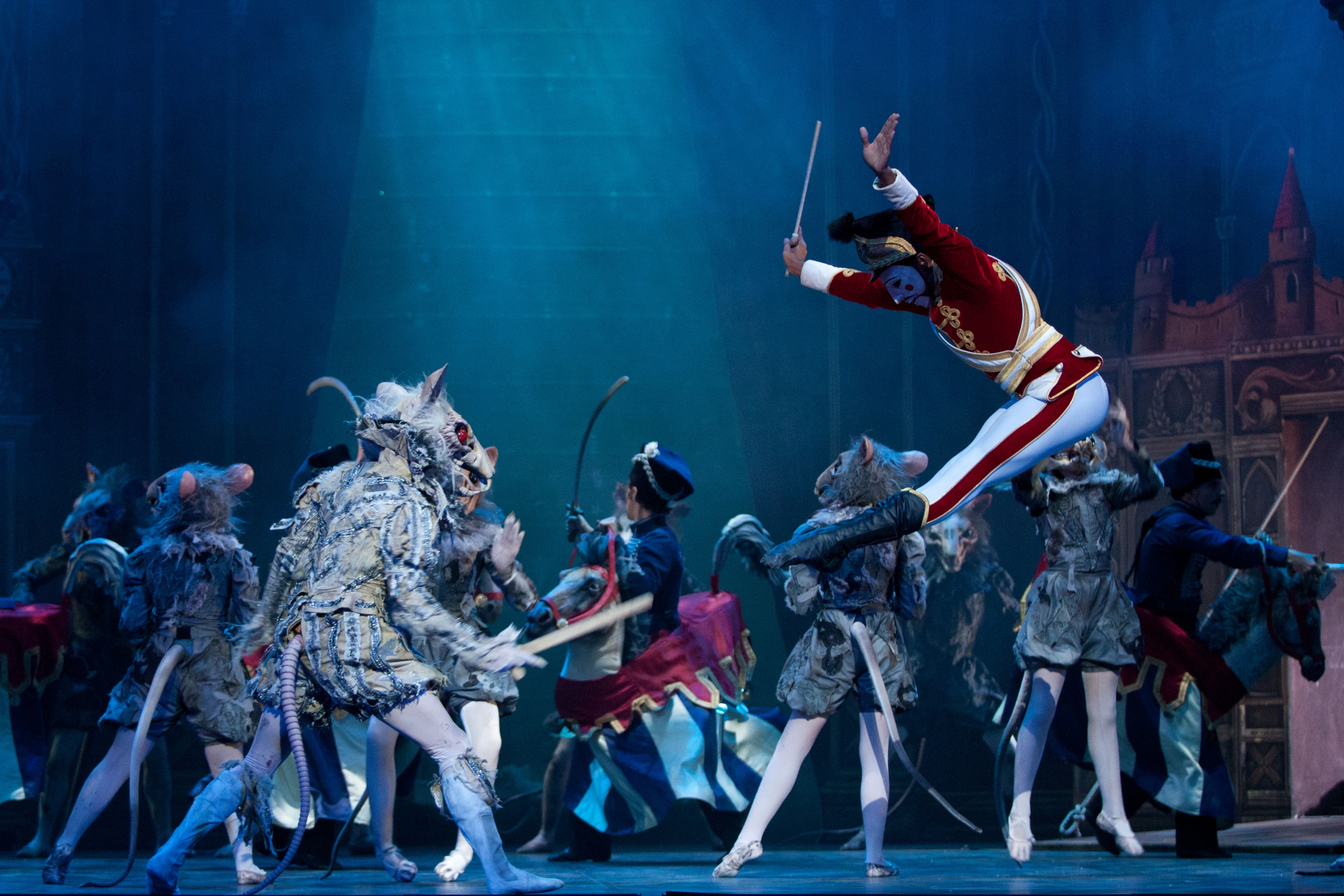 Angry mice with lashing tails and an army of marching soldiers make the battle a visual spectacle. The soldiers snap to attention, their backs ramrod straight, in stark contrast to the feral, ferocious mice who cavort around, led by the swaggering Evil Mouse King. Humour abounds as the mice use a mousetrap to fire a wedge of cheese at the soldiers, knocking them down like bowling pins. Reinforcements charge in on ‘horses’ (charming costumes echoing the hobbyhorses the boys ride in the party scene) while the Nutcracker – now a dashing soldier – is injured.

The wounded Nutcracker and Clara are swiftly transported to the Land of Snow. This winter wonderland flawlessly showcases English National Ballet’s exquisite ensemble dancing. Those glittering Snowflakes sparkle with icy precision! Accompanied by the harmonious choral voices of the children from the party, the Snowflakes’ chilly dance will warm your heart. As the Snowflakes drift, Clara dances with the Nutcracker, who is now Dr Drosselmeyer’s Nephew (James Forbat).

Perhaps the greatest challenge for the audience of Nutcracker at the London Coliseum is keeping track of the Nutcracker. The Nutcracker doll comes to life and is portrayed by one dancer (Max Westwell) throughout the battle, before becoming Clara’s idealised Nutcracker prince, in the guise of the Nephew. Bear this in mind and English National Ballet’s storytelling is otherwise easy to follow. 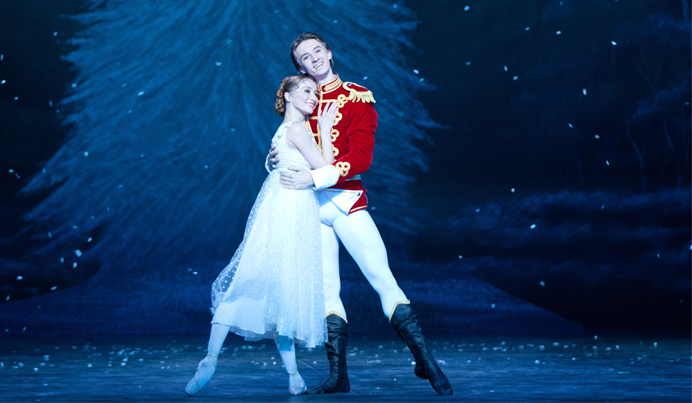 I loved the colourful hot air balloon which whisks Clara, the Nephew and Drosselmeyer off at the end of Act One. The balloon lands by a magical puppet theatre where we are treated to global divertissement performances.

Yonah Acosta (nephew of the legendary Carlos) is explosive and energetic in the Russian dance. His tour en l’air (turning jump) sequences are exciting and delivered with the flair I have come to expect from him.

Lively and engaging Spanish and Chinese group dances are just as wonderful. The Arabian dance – featuring four midriff-baring females and a whip-wielding Sheikh – is slightly odd, as a grown-up Freddie is mercilessly taunted before being rescued by Clara and her Nutcracker. While I understand the adult incarnation of Freddie being whipped is simply part of Clara’s dream (which comes about during a restless sleep following him breaking the Nutcracker doll) it is doubtful that this is really necessary in such a family-friendly ballet.

There is no doubt at all that the graceful Waltz of the Flowers allows the corps de ballet to blossom. This famous passage is beautifully choreographed and danced, with costumes in a divine rose-petal pink.

Tchaikovsky’s magnificent score is played to perfection by English National Ballet Philharmonic. The most well-known music in Nutcracker is The Dance of the Sugar Plum Fairy. Our Clara (Laurretta Summerscales) returns after the divertissement dances as the prima ballerina of the piece, the delicate Sugar Plum Fairy. With frequent poses on one foot, rapid turns and precise pointe-work, the dancer in this role needs to be an assured technician, creating the impression of lightness and daintiness. As a relative newcomer to the character, first soloist Laurretta is refined and lyrical, scarcely touching the floor as she powers through continuous turns.

Clara’s voyage culminates with her grown-up self dancing the night away with her childhood crush – and the final pas de deux is classical ballet in its purest form.

Whether you are a ballet aficionado or just eager to be swept away on a Yuletide adventure, this Nutcracker will fill you with Christmas joy.

*Publicity photography of Daria Klimentová and Vadim Muntagirov by Guy Farrow and and Patrick Baldwin.

*Production photography of the battle scene courtesy of Photography by ASH.

*Production photography of Daria Klimentová and Vadim Muntagirov in the Land of Snow by Caroline Holden.

This review also featured on the Milton Keynes Citizen website.*