Ballet lovers in 29 countries across the world enjoyed a live screening of The Royal Ballet’s newest full-length work, The Winter’s Tale, last night. 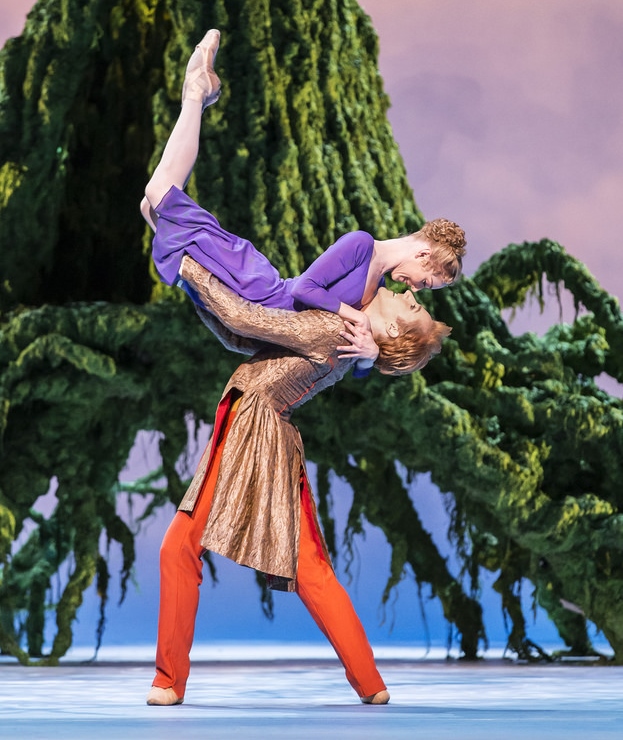 Cineworld Milton Keynes had very few empty seats as audience members immersed themselves in Christopher Wheeldon’s captivating ballet of Shakespeare’s ‘problem play’. A tragicomedy about love and jealousy, The Winter’s Tale depicts the psychological breakdown of Leontes, the King of Sicilia.

When his childhood friend Polixenes, the King of Bohemia, visits the kingdom of Sicilia, the two kings spend time together and become closer than ever. Polixenes bonds with Leontes’ wife, Hermione, and enjoys getting to know the couple’s young son, Mamillius. News that Hermione is once again pregnant, with a younger sibling for Mamillius, brings the friends even greater happiness.

All is fine until Leontes suddenly goes insane and becomes convinced that Polixenes and Hermione have been having an affair — and that Polixenes is the father of the unborn child. Soon, their friendship is merely a memory; the baby is abandoned; tragedy strikes as Leontes turns on Hermione and a young couple face a seemingly insurmountable challenge to find their happy ever after.

“When you do dance, I wish you

The development of the characters and the very internal emotion of jealousy are central to Shakespeare’s text so choreographer Christopher Wheeldon certainly made an ambitious decision choosing to interpret The Winter’s Tale through ballet. A great deal must be explained onstage as the play wends its way through the past, the present and sixteen years into the future.

Hence, in the ballet, a passage of time needs to be travelled. This begins with an emphasis on the childhood friendship between the kings and progresses to when the baby carried by Hermione has grown into a skittish sixteen-year-old. Fortunately, the six principal dancers (Edward Watson, Lauren Cuthbertson, Sarah Lamb, Steven McRae, Zenaida Yanowsky and Federico Bonelli) supersede all expectations in their technical and performance abilities.

Edward Watson as Leontes makes a fairly non-kinaesthetic human experience (the fear of loss, suspicion of betrayal and colossal uncertainty that jealousy involves) positively ooze from his pores. His body contorts into shapes in a way that no one else’s can through a series of distorted movements and troubled gestures. 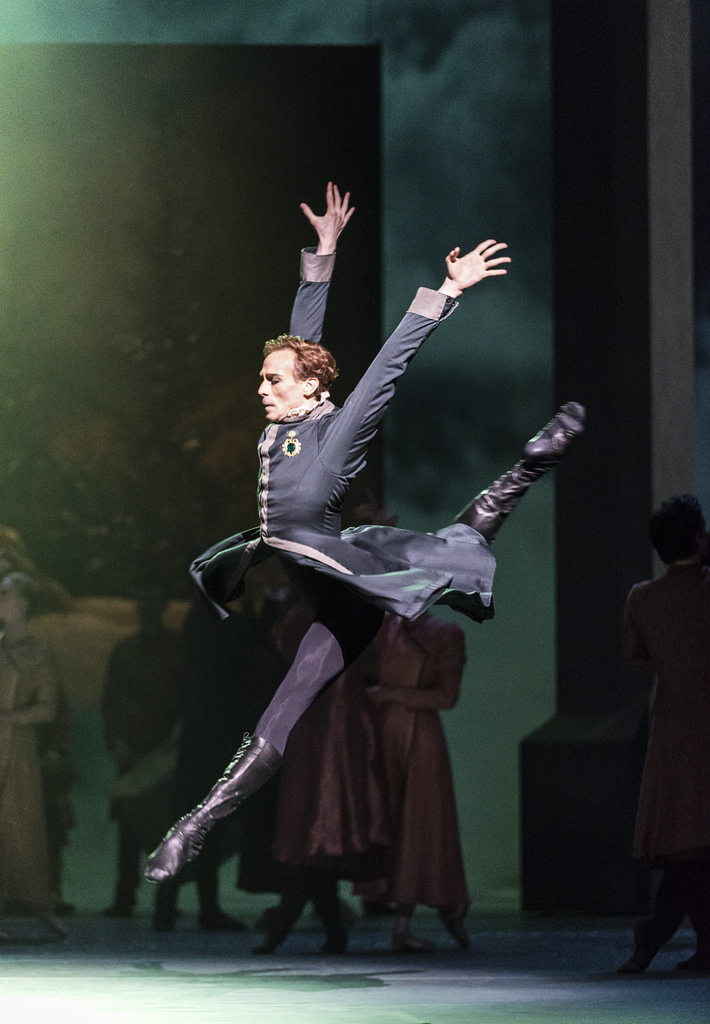 Using his limbs to reach the extremes of dramatic effect is Edward Watson’s signature style and just his fingers alone express the torment of Leontes’ madness. Audiences truly saw psychopathic jealousy onstage at the Royal Opera House last night. And, of course, the beauty of the Royal Opera House Live cinema screenings is that viewers are treated to close-ups of the dancers’ facial expressions. Edward Watson’s certainly communicated Leontes’ deranged state and increasing angst.

The deterioration of the friendship between Leontes, Polixenes and Hermione is very well-crafted through Christopher Wheeldon’s choreography. A joyful motif danced by the trio when all is well is repeated with slightly different gestures after Leontes is struck by his irrational belief. This very effectively portrays the way Leontes has distanced himself from the two people he believes have betrayed him.

The production as a whole is one of contradictions – it is classical yet contemporary, narrative but still somehow has a feeling of the abstract – and there are stark contrasts between the two kingdoms. Sicilia is dark, wintery and atmospheric. Shadows and billowing silk curtains produce a gloomy and eerie setting as a backdrop to the breakdown of Leontes, and that of his marriage and friendship. 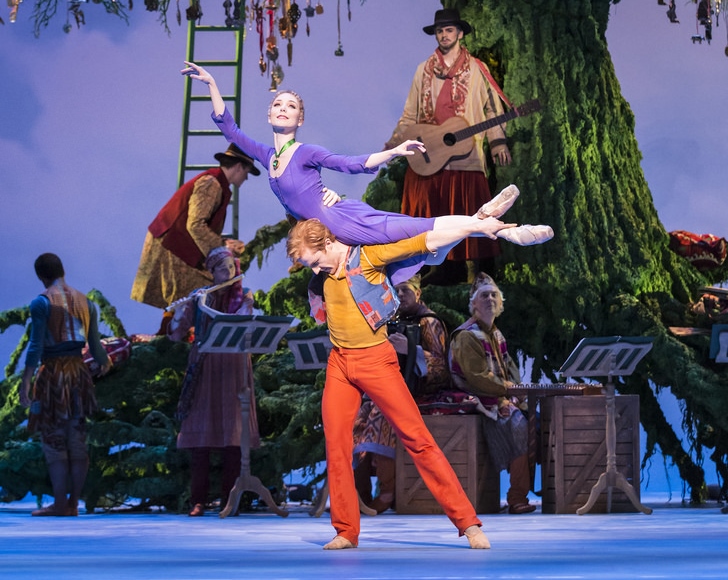 Bohemia, on the other hand, is a colourful, sunny and jubilant place. Here, Sarah Lamb and Steven McRae absolutely radiate romance and beauty as Perdita (the sixteen-year-old daughter of Leontes and Hermione, who has been raised by a shepherd after being rejected by Leontes as a newborn) and her beau, Florizel (the son of Polixenes). Their fluid lines are extended exponentially into unusual and striking lifts.

Steven McRae’s Florizel is charming and energetic. Sarah Lamb unites the pure innocence and simplicity of a shepherd’s daughter with the graceful elegance of a princess in her performance as Perdita. Together, these two enchant throughout the poetic second act (a glorious thirty minutes or so of pure dance, bathed in the bright lights of Bohemia during the villagers’ annual springtime festival).

By the third and final act, it is impossible not to be invested in the tale of Sicilia and Bohemia and hope that love will help to right the wrongs of the past. As the two kingdoms are reunited, Hermione (Lauren Cuthbertson) is restored from her hiding place as a living statue and grants Leontes forgiveness in a sublime pas de deux. 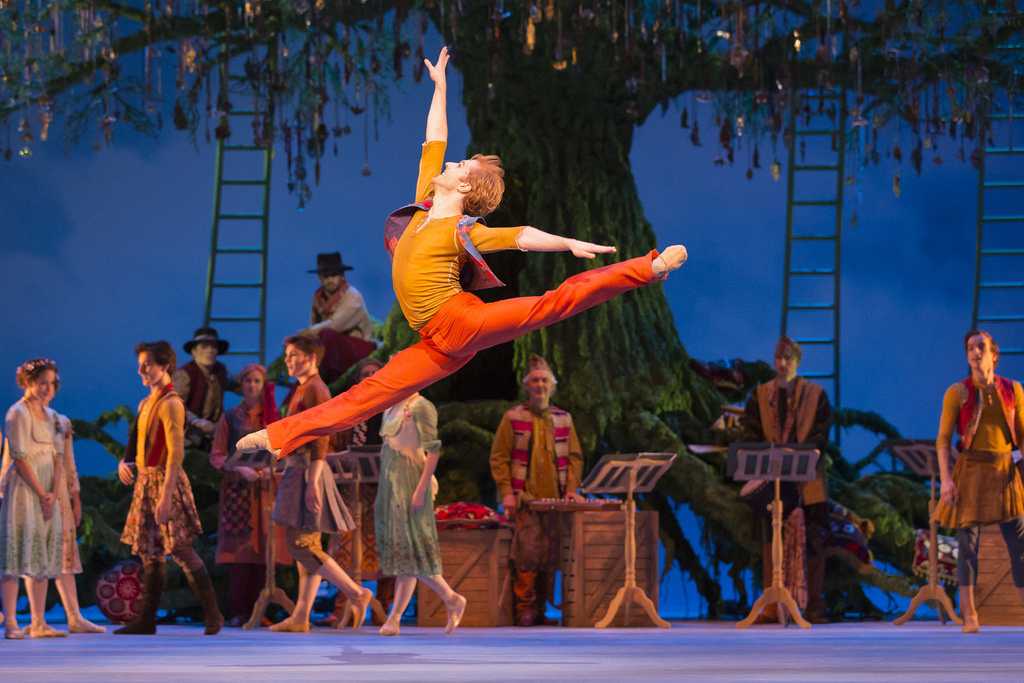 My verdict? The Winter’s Tale provided a memorable evening of escapism enjoyed by many people in Milton Keynes and, no doubt, the world over.