They say it takes two to tango and Vincent Simone and Flavia Cacace are the perfect partnership in their sensational new show. The dynamic dance duo are joined by a talented cast of performers for an exhilarating and entertaining fusion of musical theatre and traditional ballroom and Latin routines in Dance ‘Til Dawn.

The title almost sounds like a challenge – if it were, Vincent and Flavia would most certainly exceed expectations. Never mind dancing until dawn, I could watch this pair all week and still not tire of their astounding agility, perfect partnership and mesmerising musicality. (And if they wanted me to join in, I’d never be one to turn down the chance to dance … particularly with the flirtatious Vincent!)

Audience members at Milton Keynes Theatre last night knew they were in for a spectacular showcase from the Strictly Come Dancing stars, even before the cast backstage would have received their “overtures and beginners please” preparatory call. 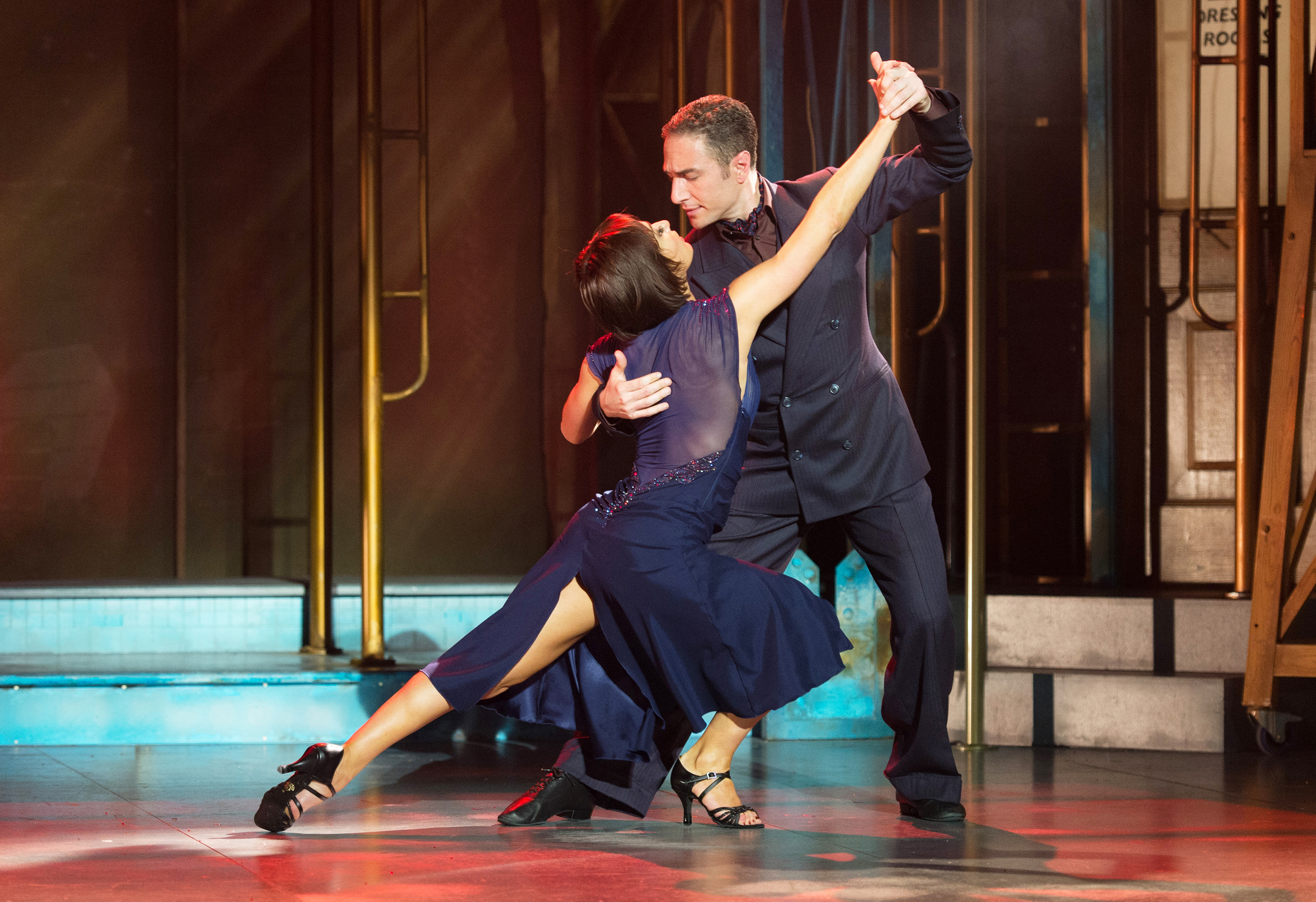 Vincent and Flavia dazzled dance fans nationwide when they first sashayed away from the confines of the ballroom and into theatre with Midnight Tango. The former world champions thrilled audiences with a tour of regional theatres and a stint in the West End. Over half a million people saw the Buenos Aires-set dance extravaganza during the production’s three year run.

Now, cheeky ‘Italian stallion’ Vincent and the simply stunning Flavia are tango-ing their way to Tinseltown. Dance ‘Til Dawn is an affectionate spoof of the girl-meets-boy romantic comedies which typified the golden age of Hollywood.

It’s the 1940s, we’re in Los Angeles and leading lady Sadie Strauss (Flavia) and her matinee idol other half, Bobby Burns, are set to star in “this fall’s most highly-anticipated movie sensation”.

Straight-talking narrator – and questionable private investigator – Tommy Dubrowski (Teddy Kempner) immediately informs us that we are about to see a show with “blackmail, murder and dancing – lots of dancing”. In response to this, there were cheers from the auditorium. We were there for dancing and dancing was what we expected!

Tommy’s world-weary witticisms and wry running commentary keep the show hurtling along as scenes change to depict various locations (including his office, a film set and a gangster’s den). Morgan Large’s sets are vast but very effective and efficient so the staging is just as slick as the choreography. 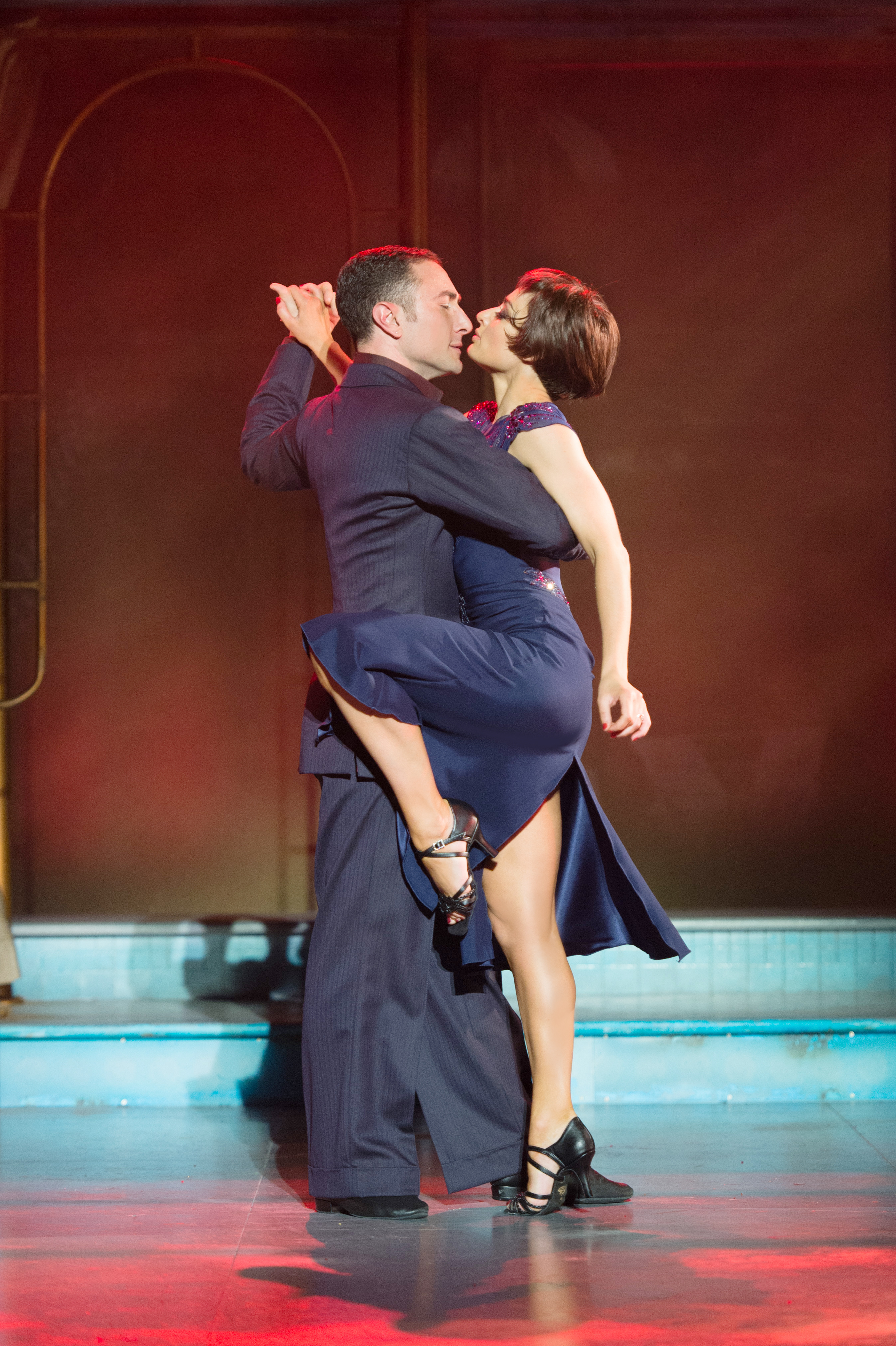 Dance ‘Til Dawn is a classic love story and vintage whodunit rolled into one. Movie star Bobby Burns has been photographed playing away with Lana Clemenza (the kooky, bouffant-haired girlfriend of shady gangster “Big Sam”). While this will not do Bobby’s already faltering relationship with Sadie Strauss (Flavia) much good, it is also bad news for Lana. She is desperate to stop the truth getting out for fear of what Big Sam will do to her. Soon, Bobby is dead and Tony Deluca (Vincent), who is just beginning to realise that Sadie is the girl for him, is in the frame for Bobby’s murder.

The characters are cunningly clichéd – from the crumpled private eye to the glamour-girl villain – and the burgeoning romance between our beautiful starlet and her handsome new lover provides plenty of reasons for Vincent and Flavia to take centre stage. Playful comedy moments see them don lampshades to ‘hide’ from the gangsters, before ducking under cardboard boxes. All while delivering faultless footwork, of course.

A tender waltz to ‘Moon River’ highlights their irresistible partnership, as does a passionate duet to ‘Stand By Me’ (even being handcuffed together does not inhibit their quality of movement). These two definitely have chemistry and dance is the only dialogue they need. Every gesture communicates their feelings, from funny moments of misunderstanding and contention to sweet sadness and romance.

While Vincent and Flavia have become most revered for their intense, sensual and passionate tango routines, they are adept at all sorts of styles and Dance ‘Til Dawn really showcases their versatility. A quickstep to Paolo Nutini’s ‘Pencil Full of Lead’ is lively and full of slapstick comedy capers. Later, Tango, Rumba and Show Dance steps merge to create a wonderful routine portraying a deep yearning strong enough to defy the boundaries of the prison bars surrounding the wrongfully accused Tony (Vincent).

As much as they sparkle in every dance, Vincent and Flavia know how to please their fans and the big finale is in their signature Argentine Tango style. Two become one for the duration of this dance as the music invades their bodies and they surrender to the rhythms – and each other. Awe-inspiring flourishes and razor-sharp footwork see audience members on their feet in standing ovation as the lights go down on this sizzling scene. 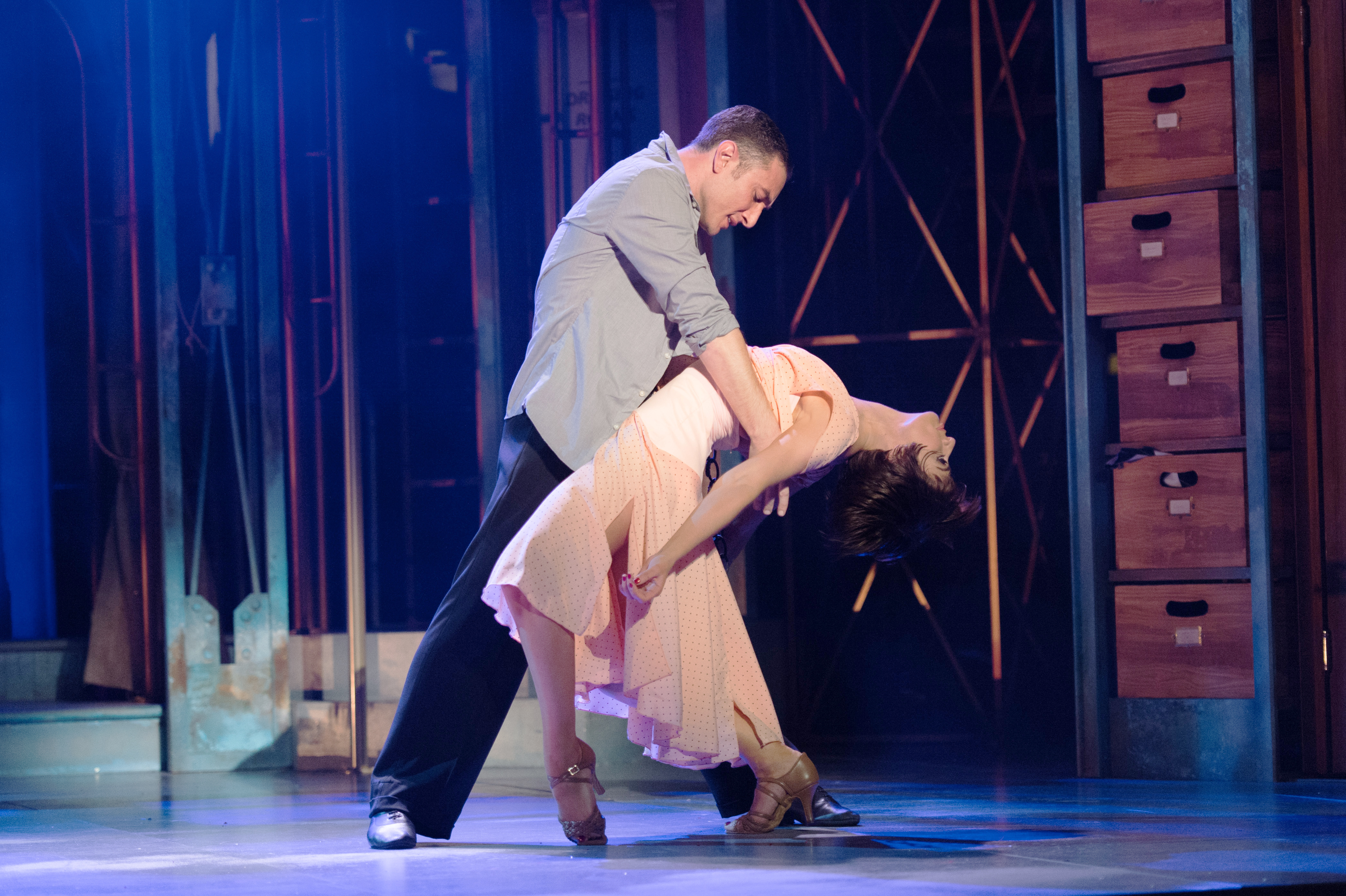 Director and Co-Choreographer Karen Bruce (who also directed Midnight Tango) has worked with Vincent and Flavia to successfully embed their impressive technical performances within a West End-style show. So we get all the breathtaking routines we love from Strictly melded with the storytelling necessary for a narrative-based production.

While it is impossible to tear your eyes away from Vincent and Flavia (they really do steal the show) the rest of the cast keeps the narrative buzzing around them. As well as delivering precise choreography in all manner of styles, the ensemble performers take it in turns to amaze us with their vocal prowess during solo shifts behind the onstage microphone.

There were occasions initially when the live band seemed to slightly overpower the singers collectively but hearing them belt out the lyrics of their individual songs more than makes up for any earlier vestiges of doubt.

On the subject of vocals, Abbie Osmon as Lana Clemenza is outstanding singing an amusingly reworked version of ‘I’m a Woman’ and the character’s swansong is a rousing rendition of ‘That’s Life’. Similarly, Abbie’s comic timing with Teddy Kempner as jaded narrator Tommy is seamless. With his one-liners and her facial expressions, you cannot help but chuckle during their scenes.

While the dancing is inspired by the likes of Fred Astaire and Ginger Rogers and Gene Kelly and Cyd Charisse, Dance ‘Til Dawn is a tongue-in-cheek pastiche that really doesn’t take itself too seriously. 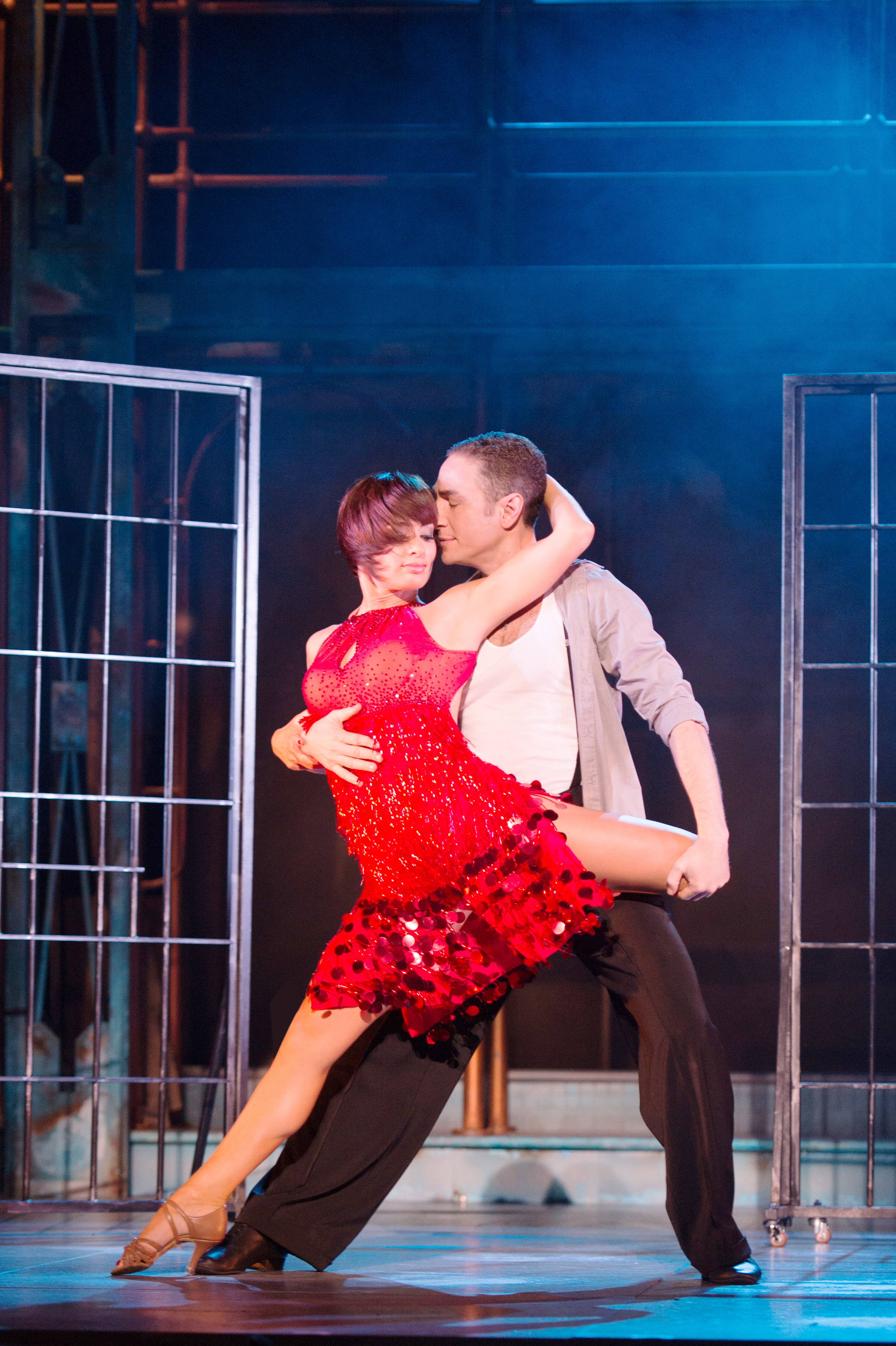 This is a fun show. It’s a loving celebration of the golden age of Hollywood and the dance duos that left their legacy on the era. The story is undemanding with plenty of laugh-out-loud moments, the costumes and sets are eye-catching, the singing is superb and the dancing is plentiful and first-class.

Really, I can’t see why anyone wouldn’t want to Dance ‘Til Dawn when Vincent and Flavia are leading the way!

Dance ‘Til Dawn continues at Milton Keynes Theatre until Saturday 10 May 2014.

A version of this review featured on the Milton Keynes Citizen website.

I also wrote a review of Dance ‘Til Dawn for Total MK.