Balletomane or first-timer, Shakespeare swot or literature loather – Northern Ballet’s A Midsummer Night’s Dream is a quirky ballet that is sure to delight.

Artistic Director David Nixon’s witty adaptation swaps Athenians in classical Greece for a touring ballet company in post-war Britain. Opting for the 1940s means the costumes are inspired by Dior’s New Look: the ladies wear chic separates, make the most of nipped-in waists and don wide-brimmed hats. It also means that the power struggles within the narrative are easy to incorporate as, during the surge in popularity that ballet experienced in the UK in the 1940s, there was a prominent hierarchy to be found within companies.

We are introduced to the members of the fictional dance troupe as their daily ballet class ends. 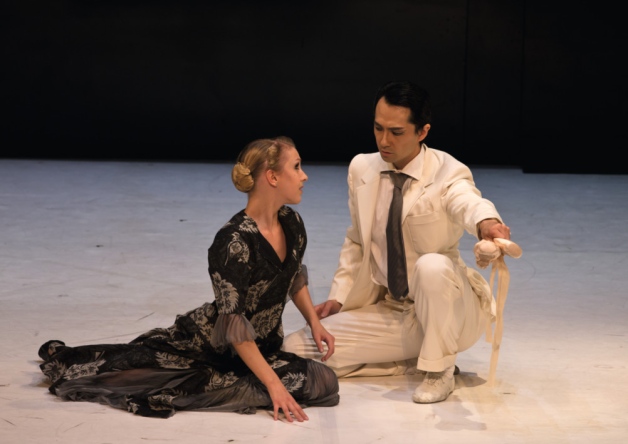 Tyrannical Ballet Master, Robin Puck, (Kevin Poeung) presides over the squabbling dancers, corralling them into position for rehearsals of Romeo and Juliet. This is a pleasing touch – where Shakespeare had a play within a play, Nixon’s A Midsummer Night’s Dream includes a ballet within a ballet – and mirrors the themes of romance, control and confusion within the central plot.

It is the attention to detail that makes the studio scene so enjoyable to watch. The dancers are spread across the stage warming up, rolling through their pointe shoes, practising extracts from routines and perfecting their balances. The arrival of the artistic director, Theseus, cues the start of rehearsal. There are many amusing moments as the understudies mark through the steps behind the lead dancers and the Wardrobe Master argues with the Ballet Master.

Soon, it becomes apparent that Helena (endearingly portrayed by Pippa Moore) is infatuated with Demetrius but the feeling is not mutual. Theseus (soon to be married to prima ballerina, Hippolyta) decides it is time for Hippolyta to retire from dancing. The Ballet Master encourages Theseus (Hironao Takahashi) to allow his protégée Demetrius (Tobias Batley) to play Romeo to Hermia’s Juliet. However, as Lysander says in Shakespeare’s text, “the course of true love never did run smooth”. Hermia (Martha Leebolt) is in love with Lysander (Javier Torres) and wishes to play Juliet opposite her real-life Romeo.

And, just to further complicate matters, Nick Bottom the company carpenter is in love with Hippolyta.

If this seems convoluted and you are not familiar with Shakespeare’s play, worry not. The storytelling and choreography in Northern Ballet’s A Midsummer Night’s Dream is crystal clear.

Hippolyta (Antoinette Brooks-Daw) performs an emotive solo, longingly clutching her pointe shoes, torn between her love for Theseus and her love of dancing. As Theseus steps in, determined for his wife-to-be to abandon her career and focus her attention on him, tensions come to the surface.

The first act ends with the fictional ballet company boarding an overnight train to the next stop on their tour.

Duncan Hayler’s sets are ingenious. The ballet studio is magically transformed into a steam train, from which we are then granted access to each of the rooms. 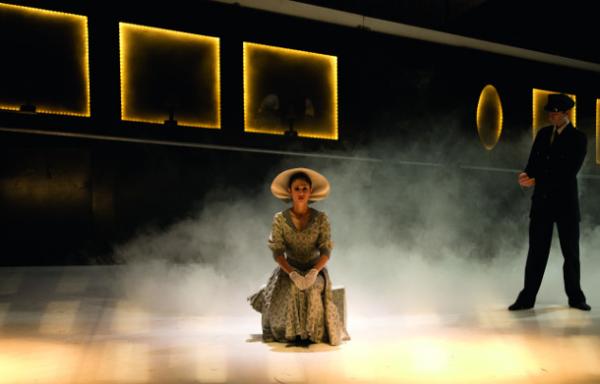 Aboard the Flying Scotsman, tempers and sleeping arrangements are affected by the day’s earlier events, with hilarious results. The train leaves the station, smoke billowing out, on track to whisk the dancers off to Edinburgh for their next performance. There are appreciative gasps in the auditorium when the train moves off from the platform. This really is a spectacular addition.

What the troupe do not realise is that they will be making an unscheduled stop in Fairyland first. The train enters a tunnel and, as the Ballet Master bids it farewell with a tap dance sequence, the dream begins.

Fairyland is a technicolour, topsy-turvy world, gazed down upon by a giant eye. Again, the sets are breathtaking (but I will refrain from ruining the surprise for those looking forward to seeing the show). In this dream-world, the Ballet Master is Puck (the mischievous sprite) and Theseus is Oberon, King of the Fairies. Hippolyta is Titania, Queen of the Fairies, and our real-world quarrelling lovers are feuding fairies.

At war with his queen, Theseus sends Puck to give Titania a love potion (made with a teardrop from the large dream-eye) to make her fall in love with the first live being she sees (preferably a wild animal).

Meanwhile, the touring company’s stage crew enter into an upside-down version of their own working lives in the dream and find themselves rehearsing Romeo and Juliet as though they are the performers.

Puck seeks out carpenter Nick Bottom (Darren Goldsmith) and turns him into a donkey. Titania then falls deliriously in love with the comically costumed creature and – after dancing a funny, suggestive duet with him – takes the delighted donkey to her bower. The cheeky Puck weaves a tangled web of love after mistakenly placing the love potion on Lysander’s eyes. Under the spell, the characters dance in relentless pursuit of each other, until Puck uses his magic to stop time and reconcile them with their rightful other halves.

Puck has some interesting and challenging choreography and is constantly airborne, flitting through speedy batterie (all those jumps where the feet cross quickly in front and behind each other). Kevin Poeung is excellent throughout as Puck, capturing the intensity of the Ballet Master with a commanding stage presence before defying gravity with speedy, suspended jumps and showy leaps in Fairyland. 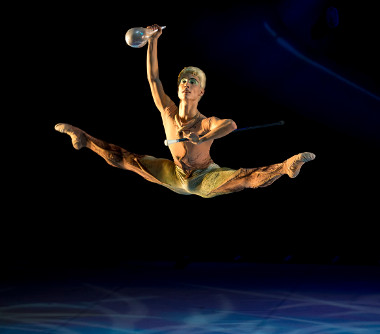 Milton Keynes’ own Sean Bates plays Puck in one of the casts (he is due to dance the role on Saturday evening) and last night he featured in the corps de ballet (often prominently positioned).

A combination of pointe work, contemporary-based ballet and riveting partnering (plus the tap dance sequence and an exuberant party number in Act Three) keeps the dancers on their toes and makes for a varied and engaging production.

The use of spoken word is perhaps unnecessary as Northern Ballet dancers are eloquent enough in their body language. However, I did appreciate the fact that Shakespeare’s final passage (Puck’s closing speech) was recited.

Northern Ballet’s A Midsummer Night’s Dream retains all the magic, romantic mishaps and mischief of Shakespeare’s play but, with the unique setting and dance content, makes the Bard’s classic rom-com seem brand new.

I also wrote a review for Total MK.