A trio of plucky piglets blow youngsters away in Northern Ballet’s Three Little Pigs, a lively new production for children.

Northern Ballet’s Three Little Pigs is a short ballet designed to introduce little ones to the magic of live dance, theatre and music. Dancers on the Graduate Professional Programme at Northern Ballet bring the well-loved fable to life, accompanied by the musicians of Northern Ballet Sinfonia. 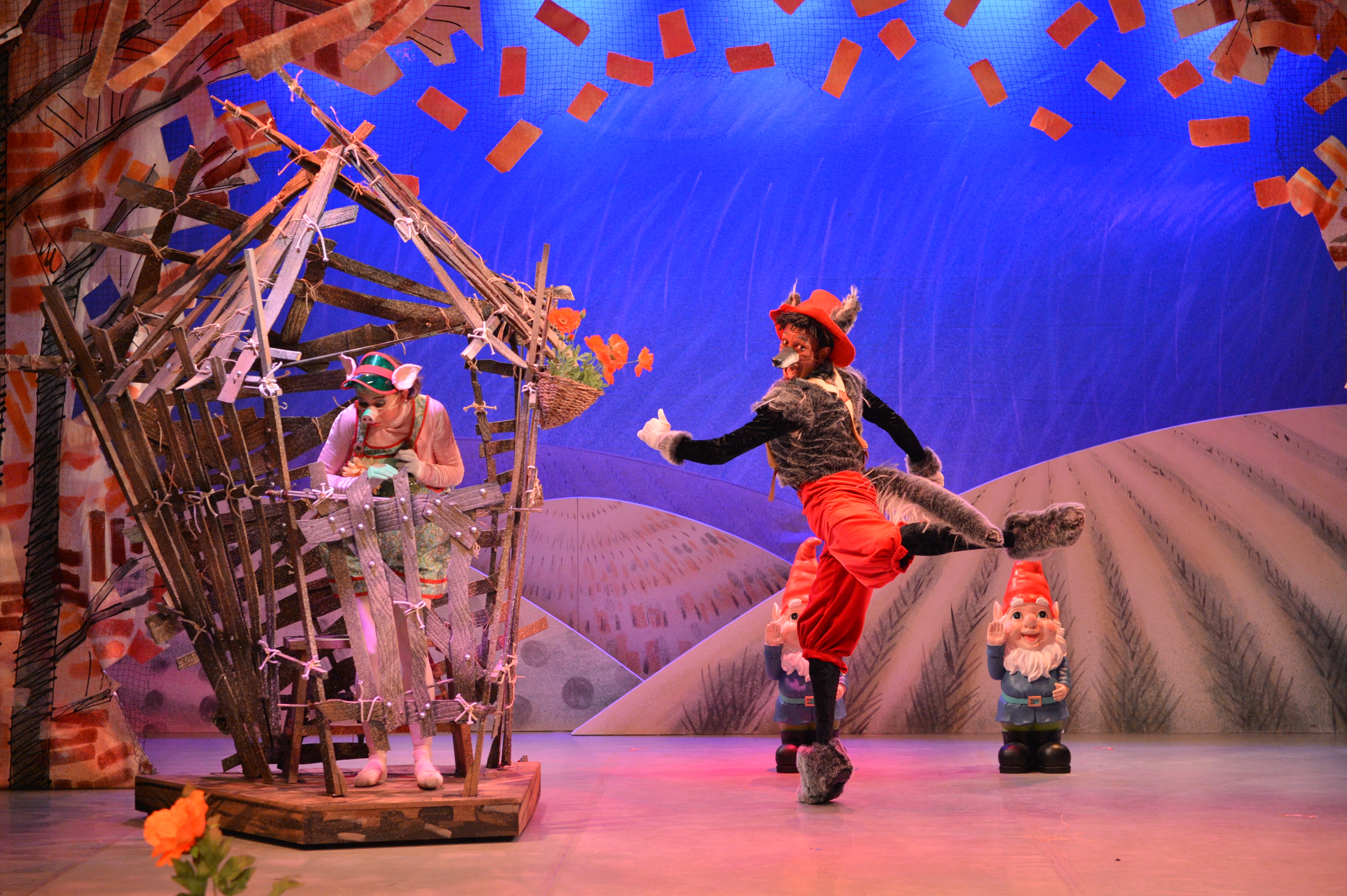 Last year’s adaptation of Ugly Duckling was delightful so I was eager to see Northern Ballet’s creative take on Three Little Pigs.

Milton Keynes Theatre responded to huge demand from little ballet fans by opening the upper circle for the two performances of Northern Ballet’s Three Little Pigs on Friday (23 May) so it’s safe to say I was not alone in my enthusiasm. I trotted along to the afternoon show and saw lots of school and nursery groups – as well as young families – in the theatre foyer. The two little girls sat behind me in the stalls were each clutching a cuddly Peppa Pig toy and chattering excitedly about seeing “real dancing pigs”. When the curtain lifted, the hubbub and bustle quietened down to an expectant murmur. A little voice piped up from nearby: “It’s starting!”.

Once upon a time, a Mother Pig bids a fond farewell to her three cheerful piglets as they leave home to begin their own adventures. She proudly sends them on their way and they set off into the countryside.

The piggy siblings are beautifully turned out. Brick Pig wears a smart, stripy shirt and shorts, a bow tie and a bowler hat on his head. Stick Pig has dungarees and a cap and sports a sunflower brooch on her front. Straw Pig wears a flouncy dress and a sunhat. With curly tails poking out from their costumes, pink ears attached to their hats and their sweet snouts, the dancers are as pig-like as they are ever likely to be! 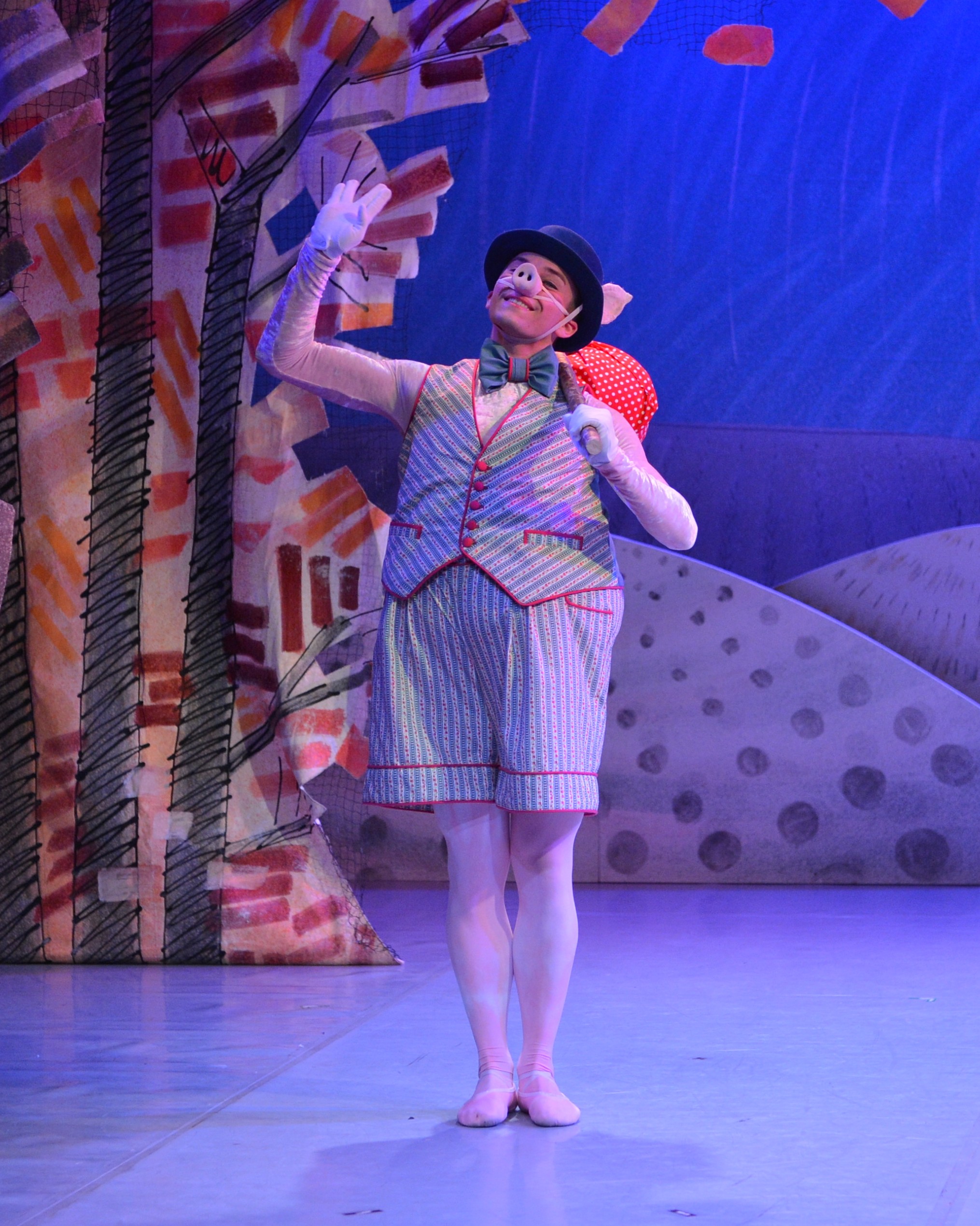 Mother Pig gives each of her offspring a bundle of items to prepare them for life in the world on their own. They receive a bar of soap, a small bag of coins, a handkerchief, an apple and their favourite toy.

Three Little Pigs is choreographed by Northern Ballet dancers Hannah Bateman and Victoria Sibson and they have definitely captured a real sense of fun. Ballet steps are combined with natural movements, slapstick and mime to ensure the story is both easy to follow and enjoyable to watch. The pigs happily cavort around, playfully teasing each other and vying for the attention of their loving mother. Humour abounds as the trio use the bars of soap to wash behind their ears and under their arms and struggle under the weight of the littlest pig’s bundle of belongings. 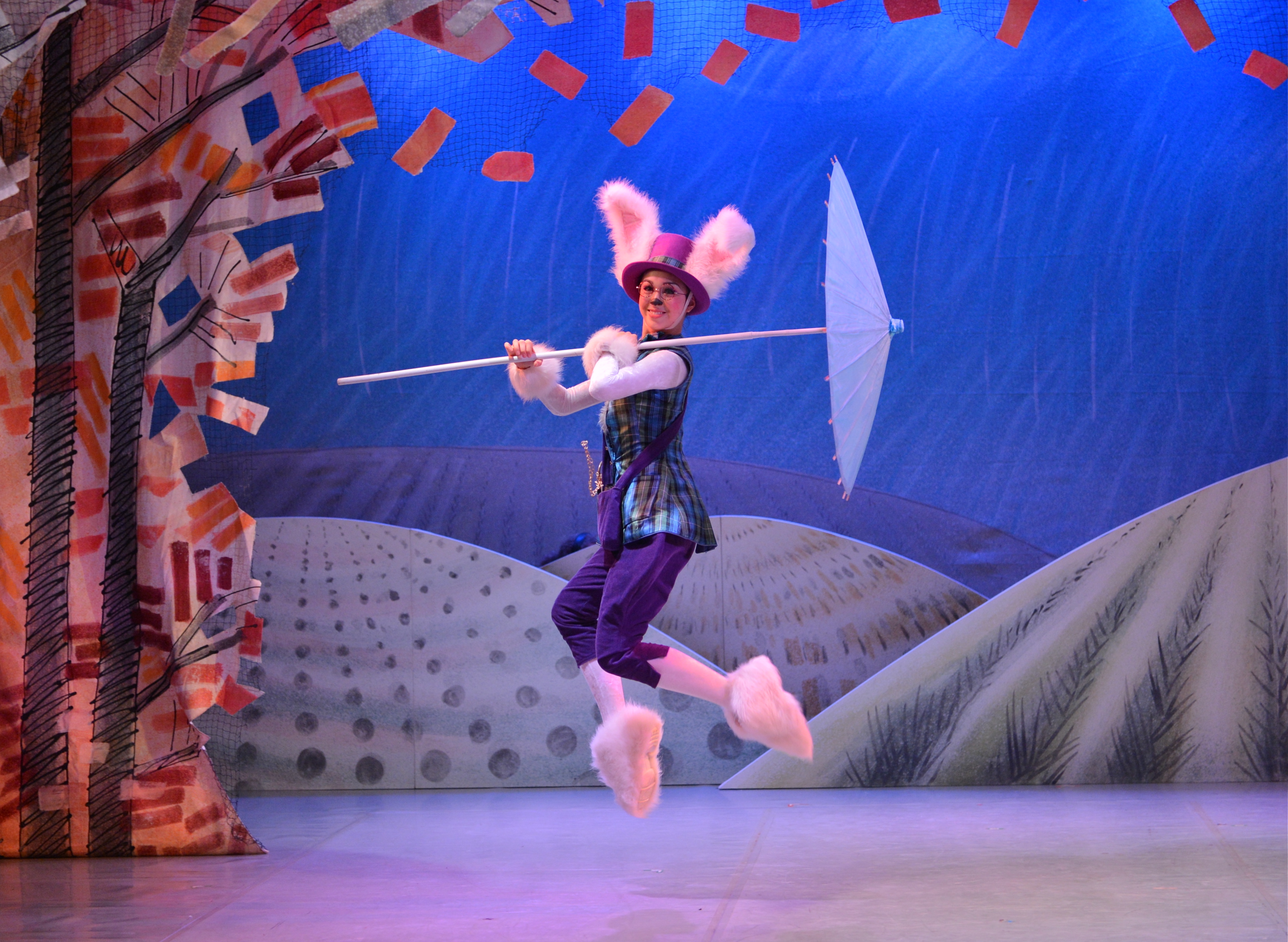 The clever use of blackouts between each scene gives the young audience time to absorb all that they have just watched. These moments also provide time for the small cast (just five dancers perform in Three Little Pigs and the cast varies from venue to venue) to prepare for the next part.

Morning arrives and each pig visits a Rabbit market seller to buy the materials to build their own houses. The Rabbit hops and wiggles energetically across the stage, showing off her fluffy tail, ears and feet. She interacts with all three pigs before dancing with a pretty parasol.

Each pig has definite ideas about the sort of house they want to build. Notably, the smallest pig (who is an ardent fan of skipping and never far from her skipping rope) is reluctant to use anything too heavy. Straw it is, then!

As the pigs get to work building their houses, we meet the Big Bad Wolf. He is ravenous and in need of some dinner. He clutches his stomach, scratches at his fur and performs plenty of contractions and floor movements to illustrate his hunger – and to show off his fabulous tail (all the costumes, accessories and props are wonderful). A turning sequence fizzles out as his dizziness gets the better of him. He really must get something to eat soon. 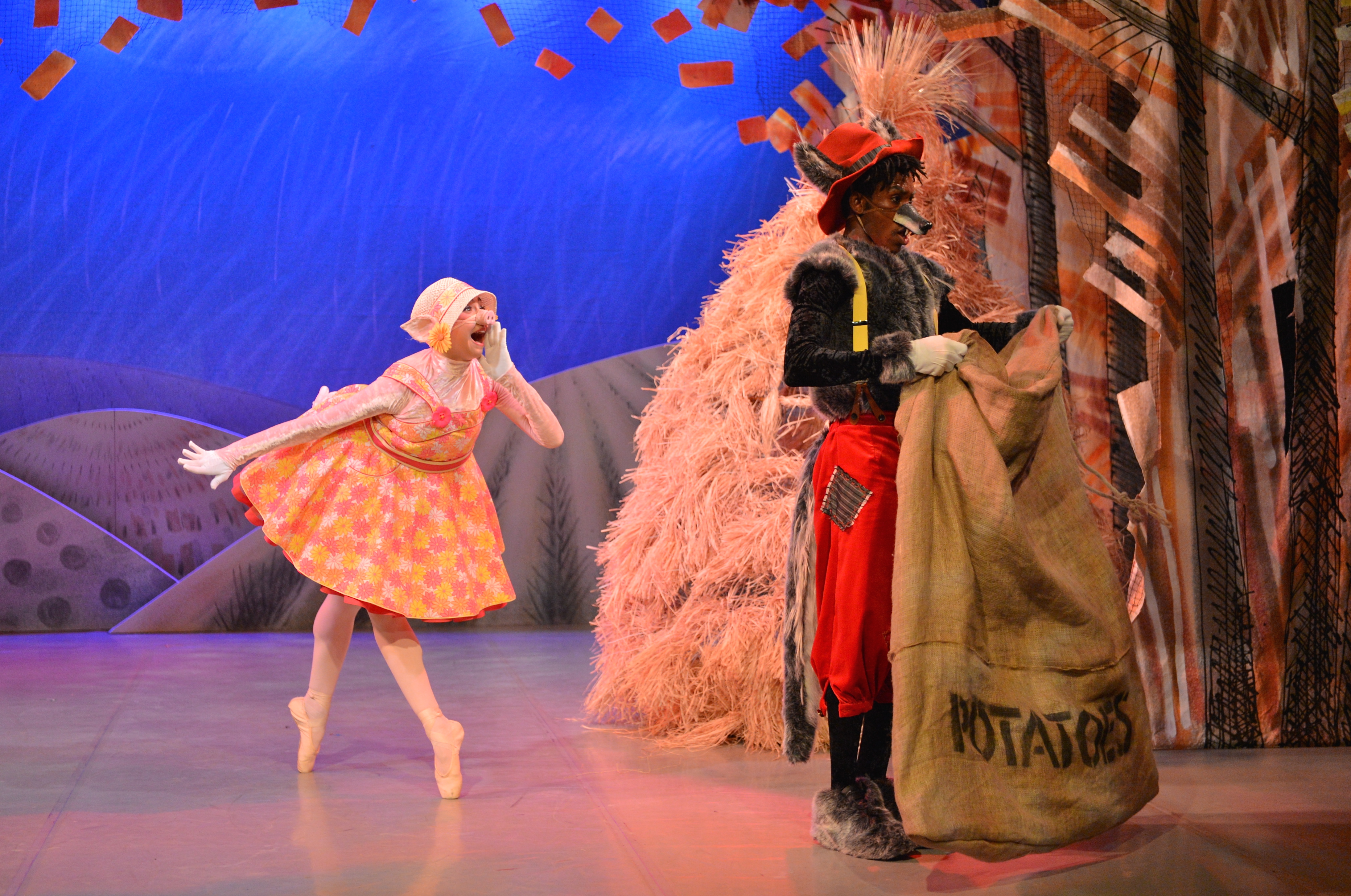 The Wolf spies the pigs on the hillside in the distance and, in an amusing ‘light bulb moment’, he has a bright idea: he could trap the pigs and eat them for dinner. Visiting each pig in turn, he attempts to befriend them. However, heeding past warnings from their mother, the pigs hide in their respective houses.

“Not by the hairs on my chinny, chin, chin”, each pig replies.

The colourful production contains no dialogue but the gestures used perfectly communicate the famous phrases. The pigs adamantly shake their heads and furiously wag their index fingers when the Wolf knocks at each of their doors.

The music, staging and special effects throughout are brilliant. I was blown away by the clever collapse of the straw and stick houses so the children in the audience must have been positively spellbound.

As ever, Northern Ballet demonstrates a commitment to telling the story as clearly as possible, along with astute attention to detail and plenty of comedic moments. 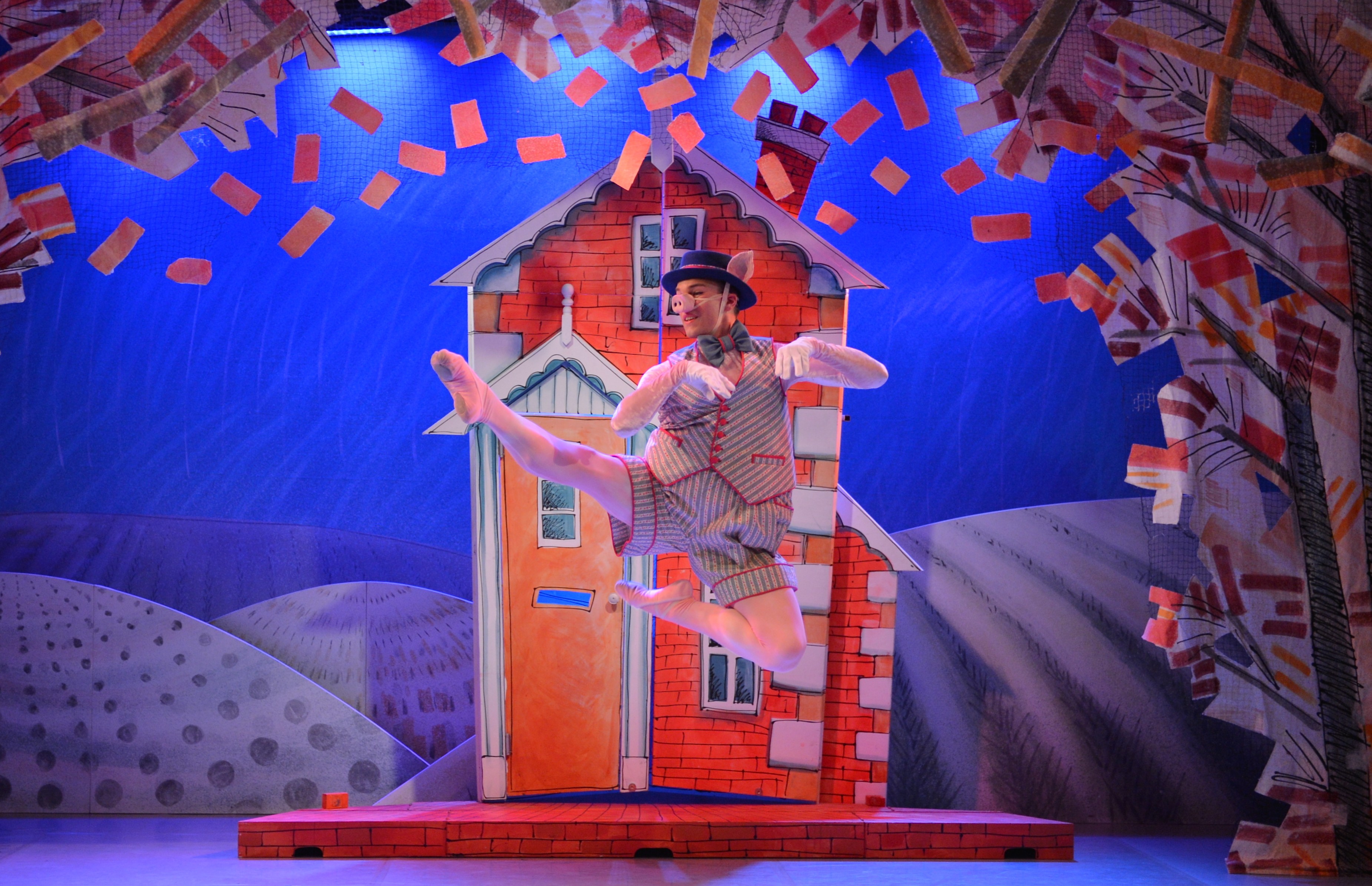 Next year’s short ballet for children will be Elves and the Shoemaker. Visit the Northern Ballet website for details.