One of the world’s greatest love stories comes alive in spectacular style during English National Ballet’s in-the-round production of Romeo and Juliet.

I was fortunate enough to see the young Russian principal dancer Vadim Muntagirov (who left English National Ballet to join The Royal Ballet in February 2014) return as a guest artist to partner the dazzling Daria Klimentová. Reunited as Romeo and Juliet for selected performances of this powerful ballet, Vadim and Daria are giving audiences the final chance to witness their perfect partnership before Daria also bids farewell to the Company. She will retire at the end of the run after 25 years as a professional dancer – eighteen of which she has spent with English National Ballet – performing for the last time on Sunday (22nd June). 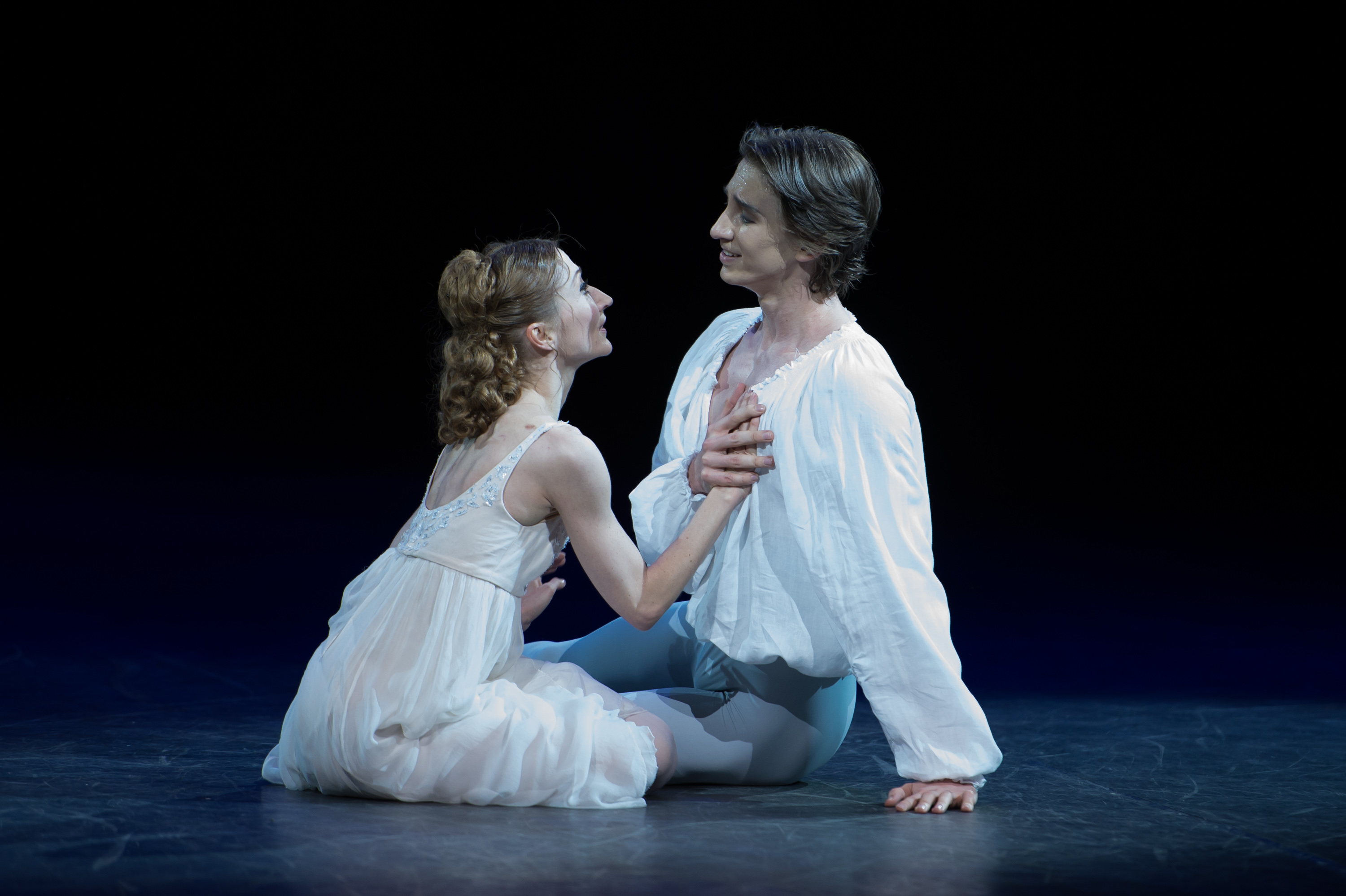 Having never visited the Royal Albert Hall before, I was not quite sure what to expect from the in-the-round experience, so far removed as it is from the traditional proscenium arch setting. (The proscenium arch configuration is the familiar arrangement which sees an audience sat directly in front of, and facing, the stage, viewing proceedings straight-on.)

Would the dancers be able to project enough to accomplish the seemingly impossible feat of communicating emotion to audience members on all sides of such a vast space? Would I miss parts of the action by being too far away or sat at the “wrong” angle? Would the necessary intimacy and intensity in the most romantic and tragic moments be achievable in an arena?

All of these uncertainties were soon forgotten as Prokofiev’s intoxicating score reverberated impressively around the Hall and the performance began. 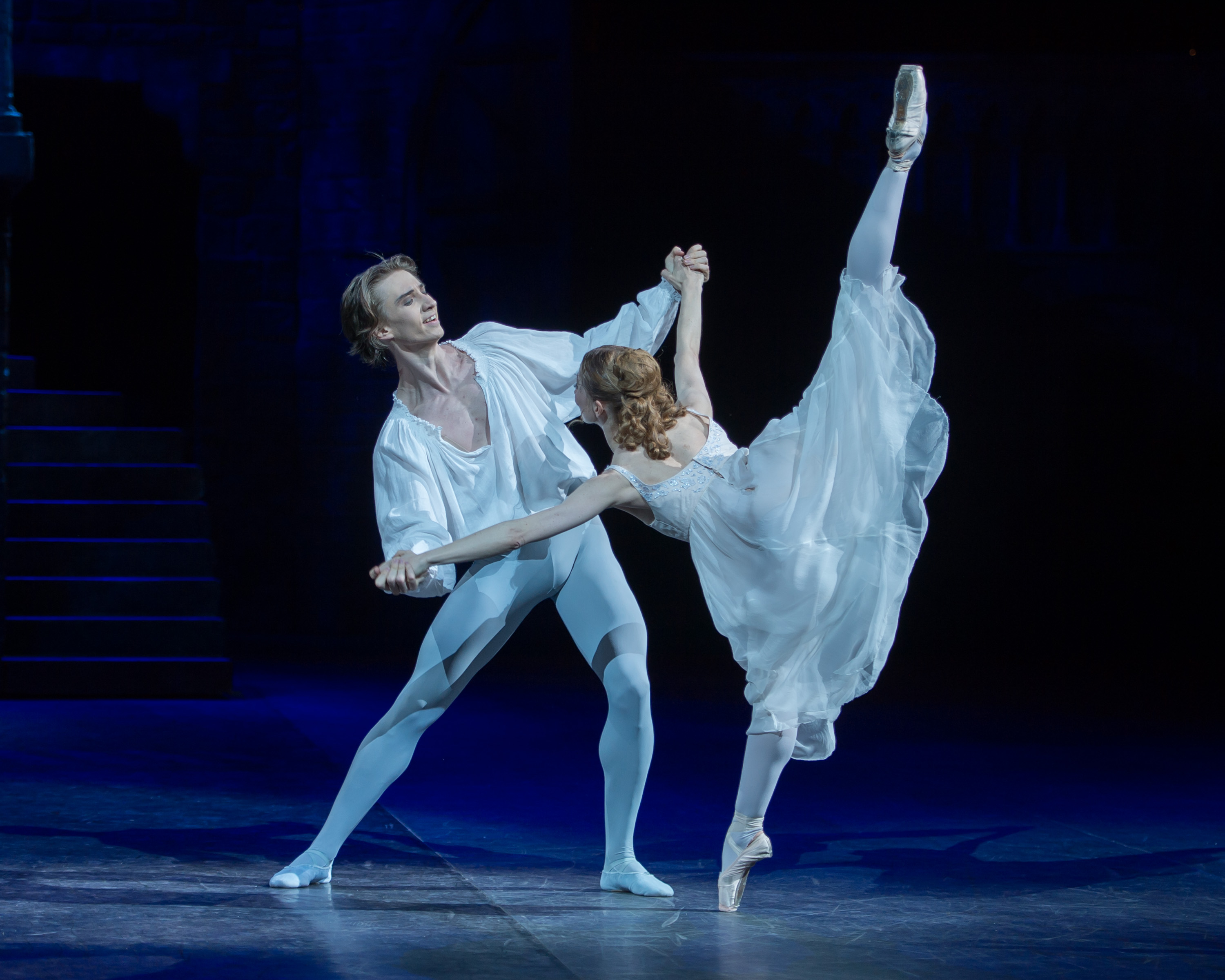 Fair Verona spills out to cover the whole of the auditorium. Sat in an aisle seat in the stalls, I enjoyed a steady stream of dancers (including all of the main players) rushing past. Company members were close enough to touch as they breezed through to tread the gangways onto the stage, costumes billowing and, as time passed, sweat glistening.

Dancer Alison McWhinney (joint winner of English National Ballet’s Emerging Dancer 2014, a competition to celebrate talent within the Company) debuted in the role of Rosaline in the matinee performance I attended. She skittishly hurried past me with a cohort of female dancers. They took centre stage to open the ballet, with a delightful scene showing Romeo playing court to Rosaline – the girl he is determined to woo before that fateful chance meeting with Juliet.

The whole city of Verona is split by the Montague/Capulet feud and dancers swarm across the expansive stage, producing all the hustle and bustle of a market square. The cast features 120 dancers, actors and sword-fighters (English National Ballet recruits extra artists for this bigger venue) and children from Tring Park School for the Performing Arts also appear. 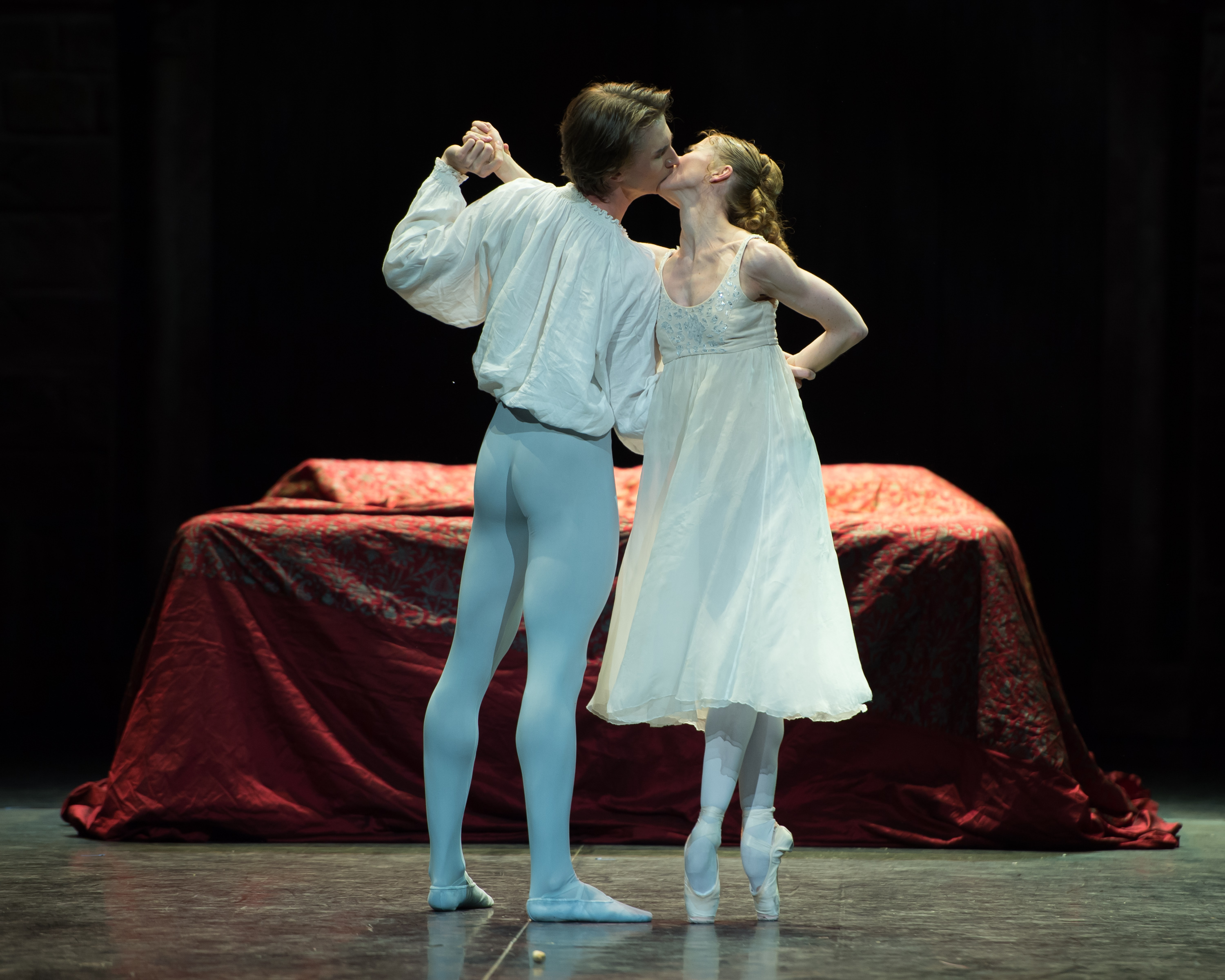 The choreography in the busiest scenes is extremely effective. Although slightly repetitive in parts, and not especially challenging, this simplicity works with the sheer number of dancers onstage and lends itself well to creating bold patterns.

Perhaps my only distress was during the masked ball scene. When Daria was dancing as Juliet with Paris (James Forbat), just before our star-crossed lovers met, my view was partially obscured by some of the velvet-clad guests.

When Romeo and his buddies Mercutio and Benvolio encounter Tybalt (a Capulet), a quarrel develops. The fight scenes are realistically chaotic and fraught with a sense of danger. At times there was so much going on that it could have become distracting but Vadim Muntagirov as Romeo, Anton Lukovkin as Mercutio and Guilherme Menezes as Benvolio made for a likeable, attention-grabbing trio. 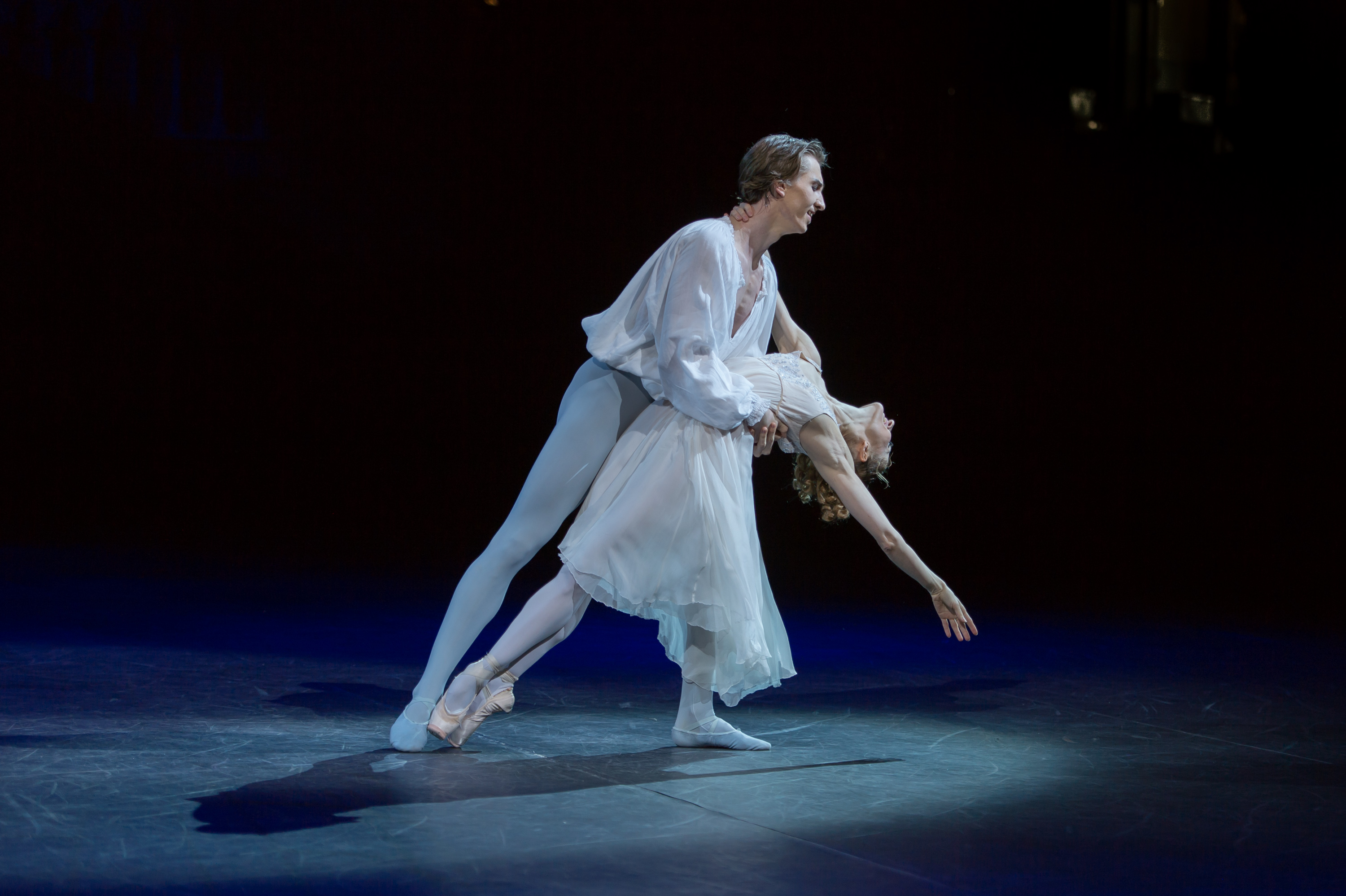 Anton Lukovkin plays Mercutio with plenty of cheekiness and has a range of comical facial expressions, while Guilherme Menezes’ sprightly and assured jumps give his Benvolio plenty of youthful energy.

Still, the stars of this show are the titular lovers and Daria and Vadim exceed expectations with their effortless partnership.

From the moment their characters met, a spark was ignited which burned passionately until the heart-breaking ending. They communicated the yearning, overwhelming ardour and subsequent anguish of the teenage lovers with ease. 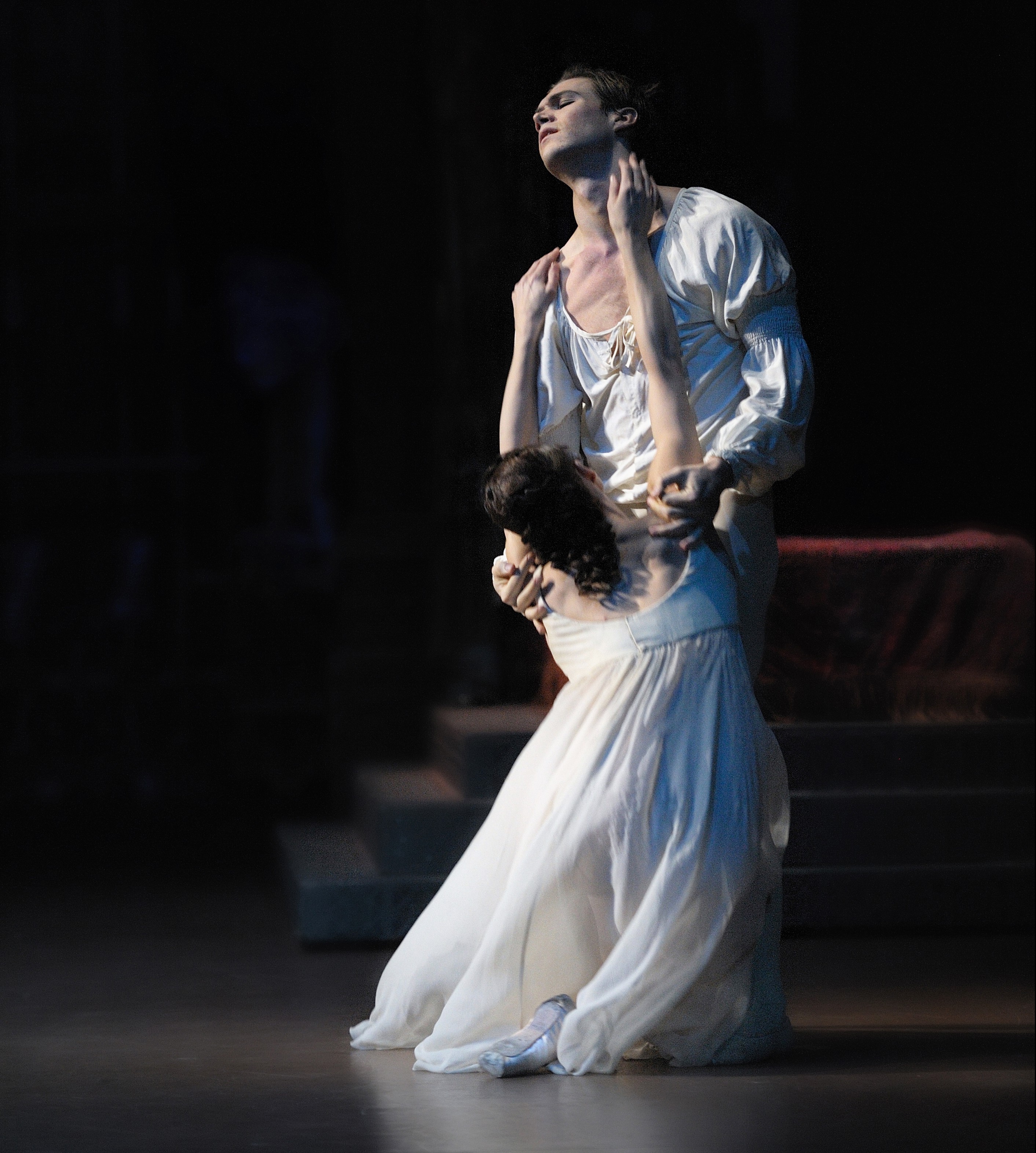 It is clear that Daria trusts Vadim implicitly and they seem to have an inherent connection – he knows just when to be there to support and frame her. He fluidly lifted his Juliet into the air, allowing Daria to illustrate her flawless lines and textbook technique. Later, their faith in each other translated to a limp, weighty Daria being dragged and shaken by Vadim as his Romeo desperately tried to will Juliet’s corpse to life.

When it is just these two alone onstage the intensity is truly spellbinding. They managed to create a poetic intimacy – even in the vast space that is the Royal Albert Hall. I was completely immersed in the tragic love story unfolding in front of me.

Undoubtedly, English National Ballet currently boasts notable talent throughout its ranks and there are multiple exciting principal partnerships to see during this run of Romeo and Juliet. Accordingly, I would anticipate that every cast has the clout to ensure audience members are swept up in an emotive, exquisitely executed performance. 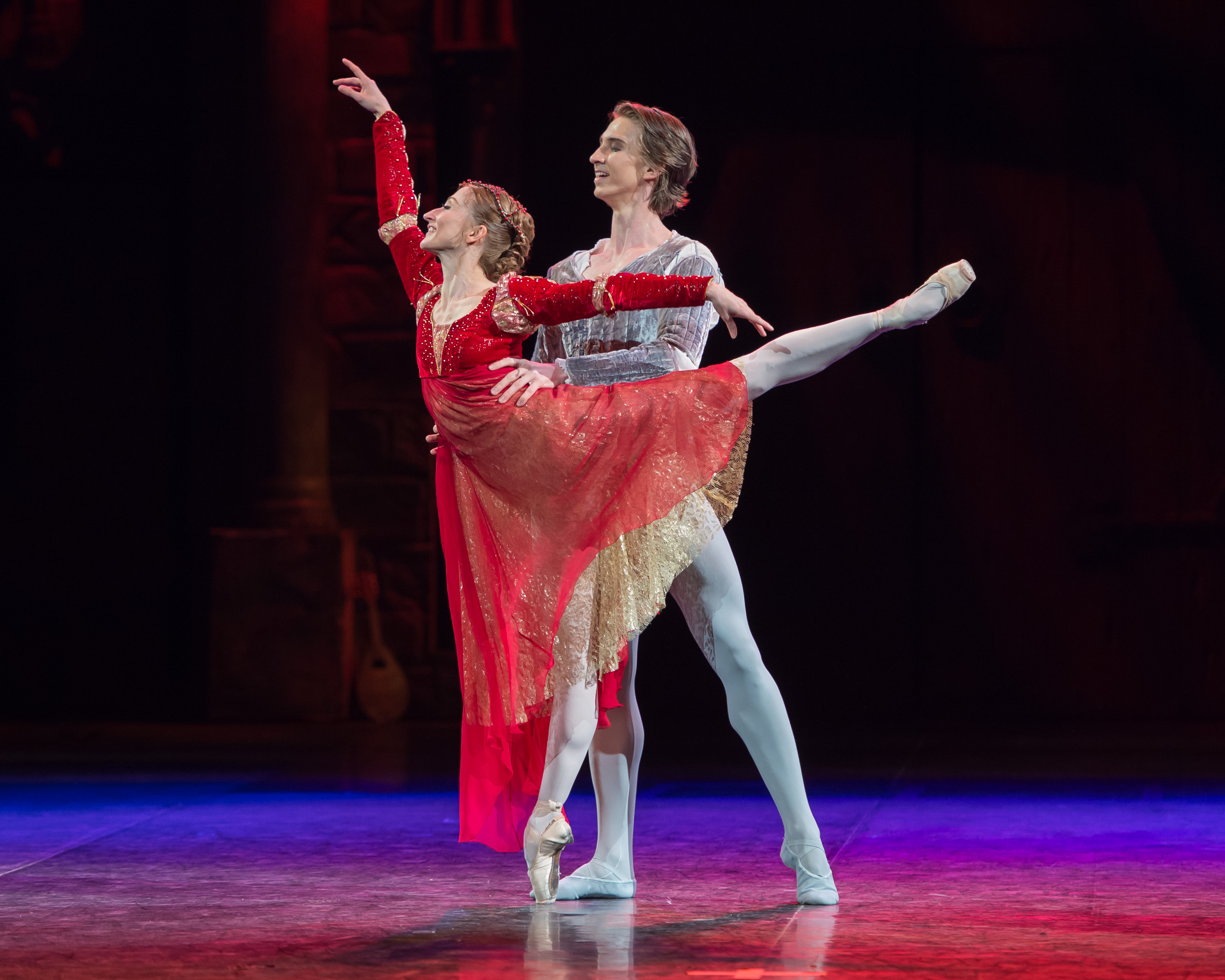