There is plenty of fun to be had with this light-hearted ballet and Company dancers were in high spirits for the opening performance at the London Coliseum last night (Wednesday 23 July).

Yonah Acosta and Shiori Kase made their debuts in the lead roles as the tale’s bickering – though still smitten – lovers. Both newly promoted, with Yonah soaring from the rank of Junior Soloist to Principal and Shiori more modestly upgraded from Soloist to First Soloist, their infectious enthusiasm and pleasing partnership set the tone for an enchanting evening. 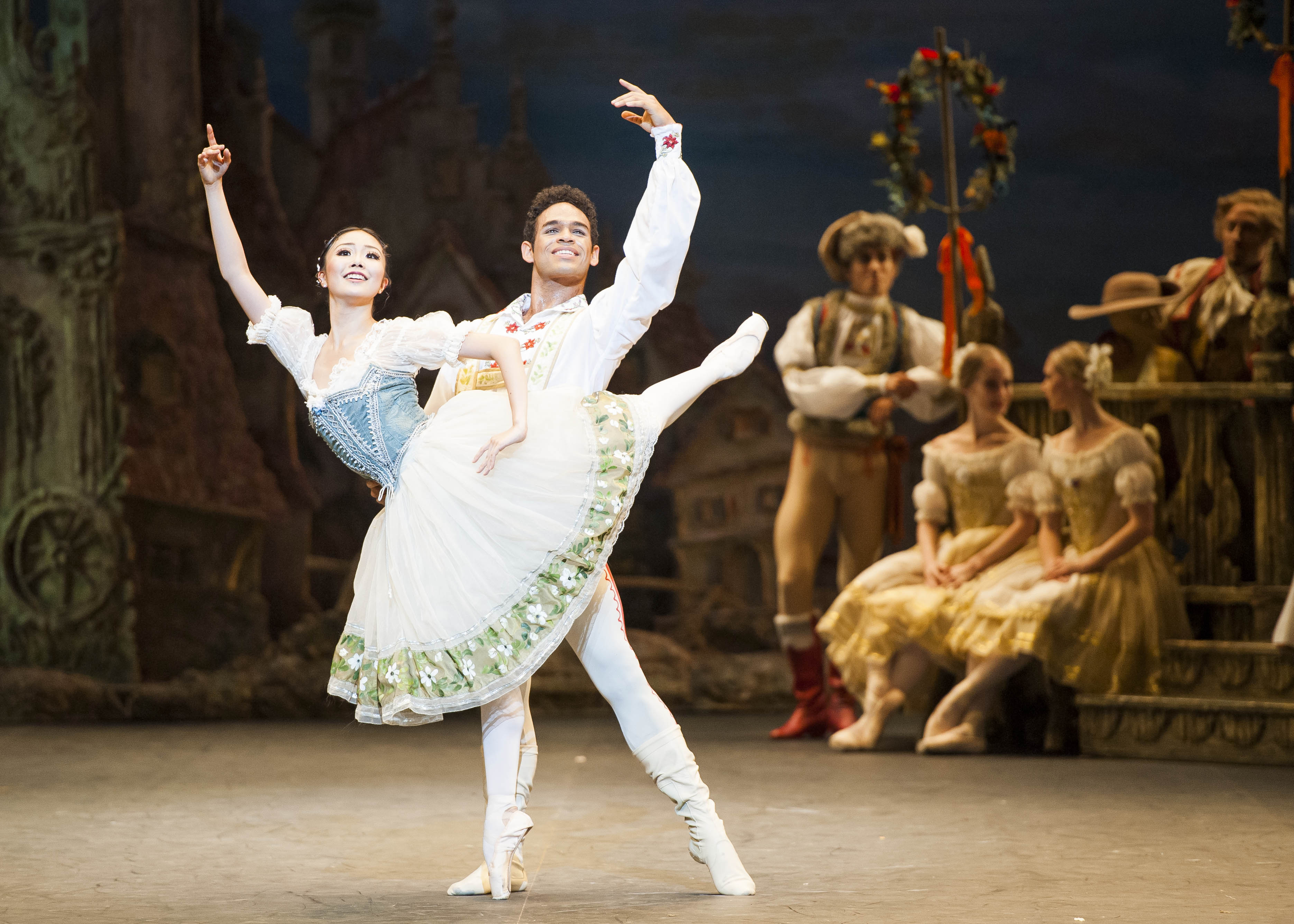 Coppélia is considered one of the greatest comic ballets of the nineteenth century and remains well-loved and frequently performed. Choreographer Ronald Hynd’s production for English National Ballet is now entering its thirtieth year, yet the pretty, vibrantly executed choreography – paired with equally appealing design by Desmond Heeley – means it has an endearing freshness and vitality.

Originally choreographed by Arthur Saint-Léon and first performed in Paris in 1870, Coppélia takes its inspiration from E.T.A Hoffmann’s sinister story The Sandman. Written during an era of widespread fascination with automata, this macabre story of a mechanical doll was given a fanciful twist for the ballet stage by Charles Nuitter and Arthur Saint-Léon. Most productions today, including Ronald Hynd’s, are based on the revised version choreographed by Marius Petipa in 1884.

The narrative presents a romance between two villagers, Franz and Swanilda, alongside the curious endeavours of their eccentric neighbour Dr Coppélius. This barmy inventor and alchemist constructs life-sized automatons. His latest handiwork is Coppélia, a beautiful, incredibly realistic-looking doll. He proudly sits her in a chair on his balcony, a book in her hands. 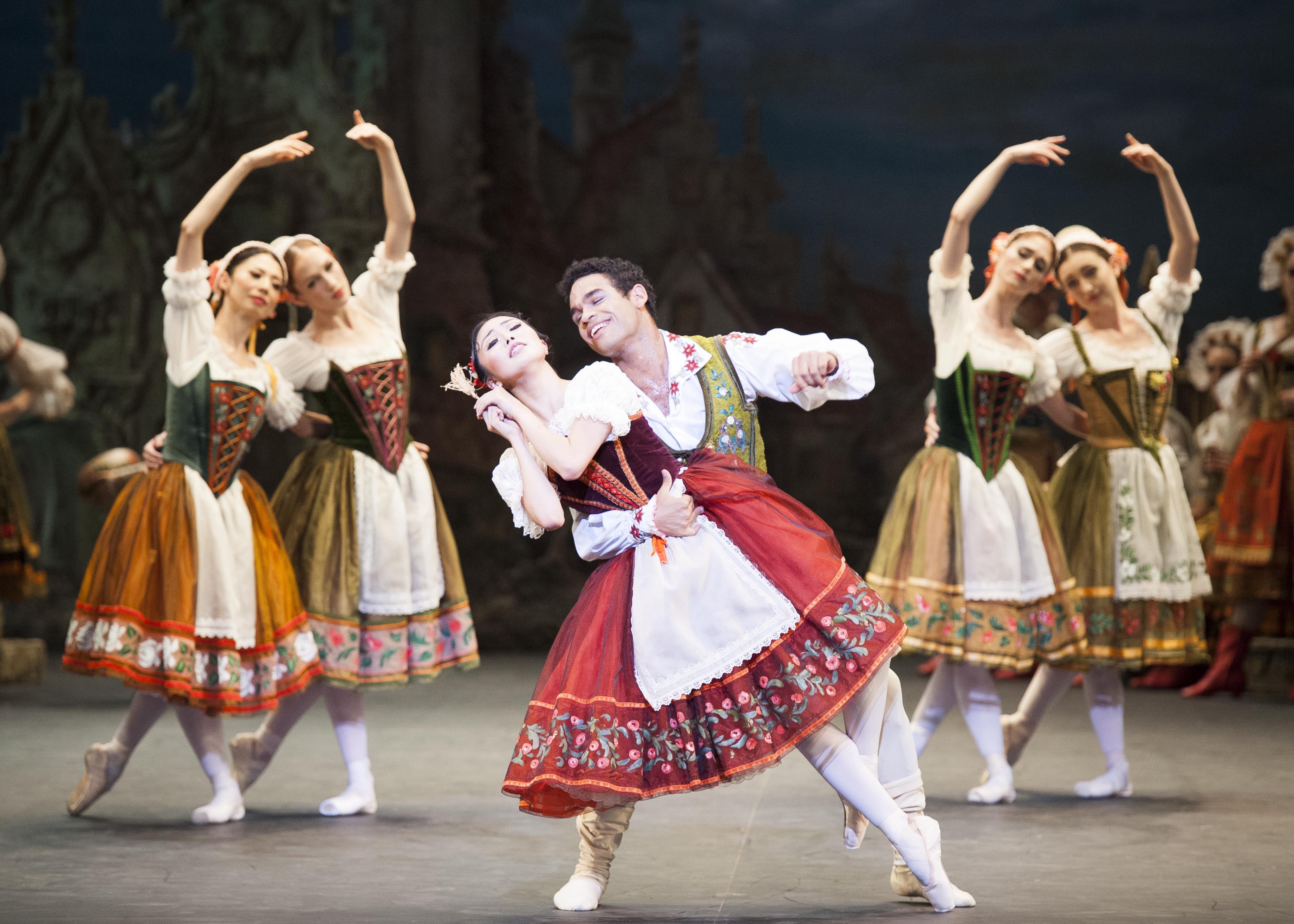 Swanilda is the mayor’s sociable daughter who is betrothed to the handsome Franz. She notices Coppélia on the balcony and tries to befriend her. Of course, the doll “ignores” her gracious greetings. Later, to Swanilda’s chagrin, Franz becomes infatuated with the enigmatic girl and shamelessly flirts, throwing kisses like confetti.

Shiori Kase is a sweet and amiable Swanilda. Her mime sequences are delivered with a natural ease and her presentation is bright and breezy. Feather-light jumps, joyful hops en pointe and seamless chainé turns (a succession of speedy half turns travelling along a straight line) illustrate her elegance and poise.

It is gratifying to see Shiori promoted and given further opportunity to develop within English National Ballet (she joined in 2009 and was made Soloist in 2013). This latest progression comes after winning Gold at the USA International Ballet Competition last month. Similarly, the recent promotions announcement from artistic director Tamara Rojo features movement up the hierarchy for Emerging Dancer 2014 joint winners Junor Souza (to First Soloist) and Alison McWhinney (to First Artist) – a rewarding result for the dancers and audiences. 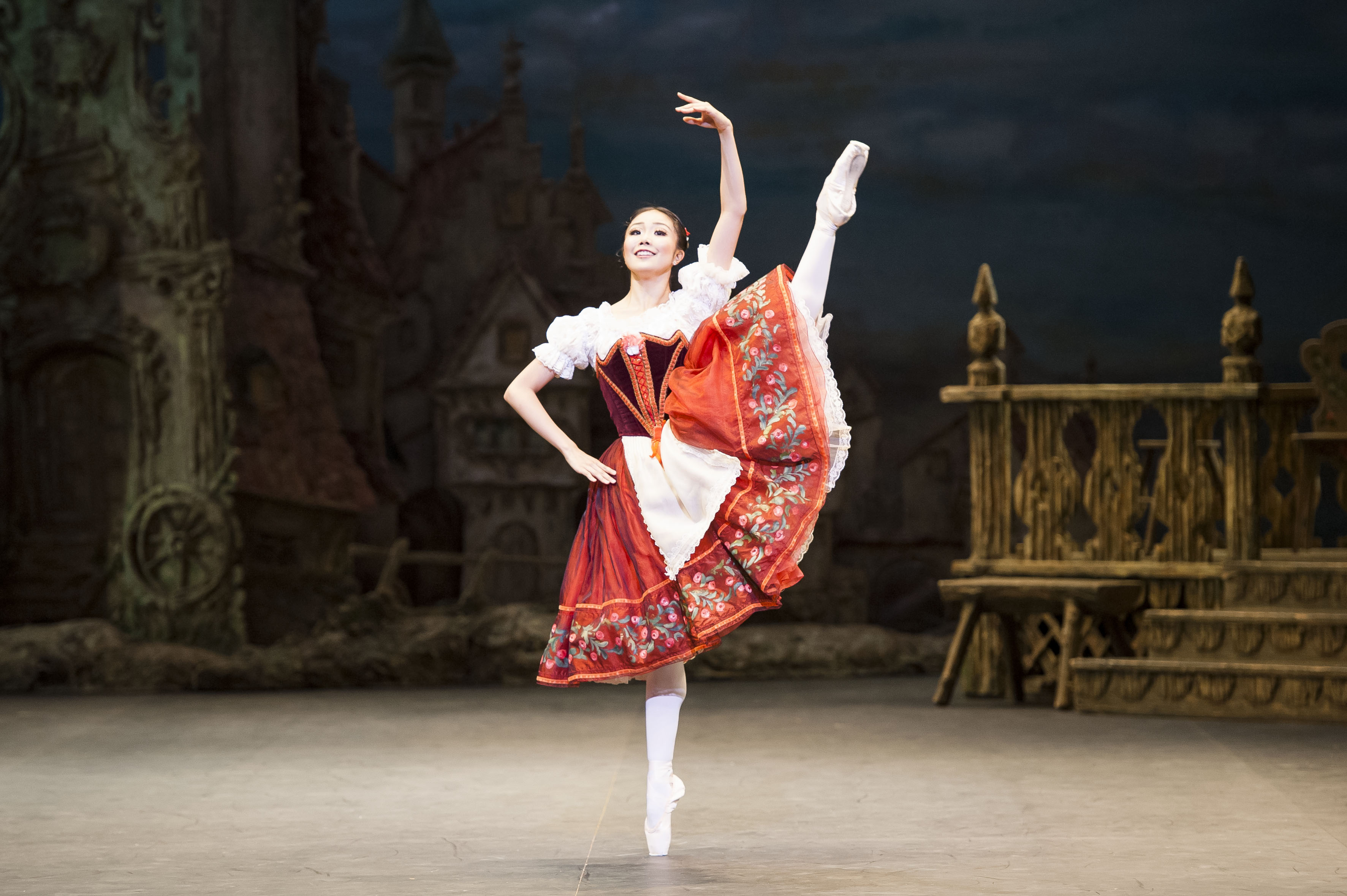 Yonah’s Franz has a twinkle in his eye, oodles of charm and a jovial candidness. Amusing antics abound throughout Act One as he strives to coax a smile from Coppélia, attempts to garner forgiveness from Swanilda and then acquires a ladder to sneak onto the balcony.

Although Yonah is preceded by his uncle (the legendary Carlos Acosta), his athleticism and engaging onstage persona negate any need for nepotism. It was only ever a matter of time before he would reach Principal status. A couple of apprehensive landings aside, he gave a bold performance and I look forward to seeing him in stronger lead roles.

Both Yonah and Shiori excel as comic actors. Shiori captures Swanilda’s playfulness and childish chutzpah perfectly when she ventures into Dr Coppélius’ house. 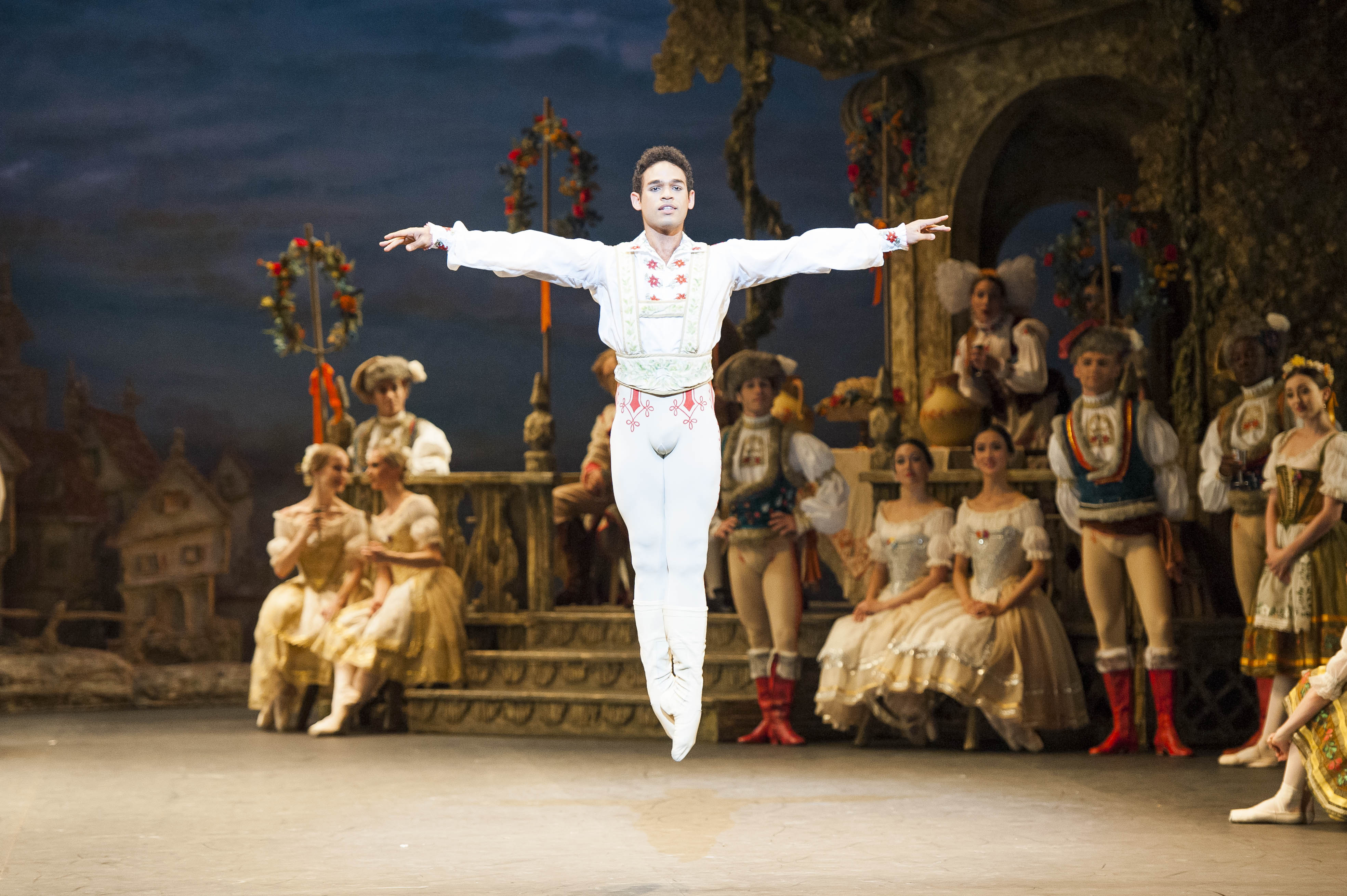 Swanilda and friends creep nervously inside the house after finding Dr Coppélius’ key (dropped during a skirmish in the village square). They uncover the truth behind his tinkering and create comic chaos by winding up all the mechanical toys in his workshop. When Dr Coppélius returns to chase them away, Swanilda assumes the identity of his much-adored doll, convincing him his ‘life-transference’ machine (hooked up to a drugged Franz) has worked.

Shiori’s parody of the doll’s stiff mechanical movements is effective, particularly when contrasted with the loose limbs she has in her entertaining Spanish bolero and energetic Scottish jig. Meanwhile, Dr Coppélius is sensitively portrayed by Michael Coleman. He achieves a balance between madness and melancholy and his despair when cradling the inanimate Coppélia doll is touching. 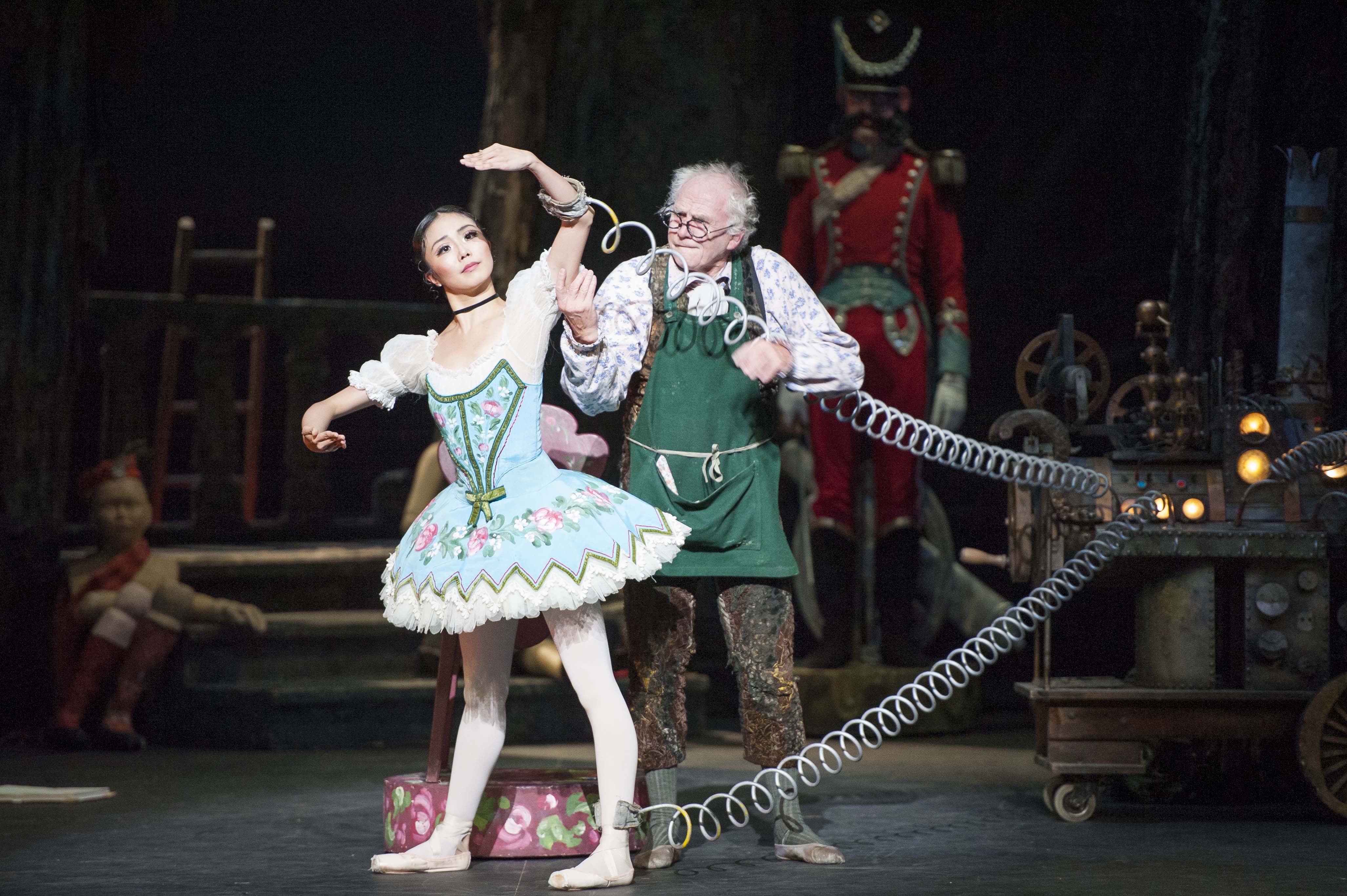 Coppélia steers clear of the heart-rending tragedy and fairytale magic of the other great classical ballets. With the exception of Dr Coppélius’ miraculous mechanicals, it is a very human story. The requisite happy ending sees Franz regain consciousness before he and Swanilda are married in a jubilant celebration. Meanwhile, the basically harmless Dr Coppélius is pacified with a pouch of gold coins and a heartfelt apology.

The wedding divertissements are radiant; the boisterous Act One mazurka superb. The 1870 Coppélia introduced national dances (the czardas and mazurka) into ballet for the first time, setting a precedent for one of ballet’s most precious traditions. English National Ballet’s colourful staging and musical director Gavin Sutherland’s rendering of the rousing passage ensure a suitably lively interpretation.

Léo Delibes’ smashing score is a combination of pure ballet music and tuneful dramatic melodies, peppered with light and shade for clear storytelling and all those comedy moments. As always, the Orchestra of English National Ballet does a grand job.

This production is like a ray of sunshine – warm and uplifting. Perfect entertainment for the whole family. 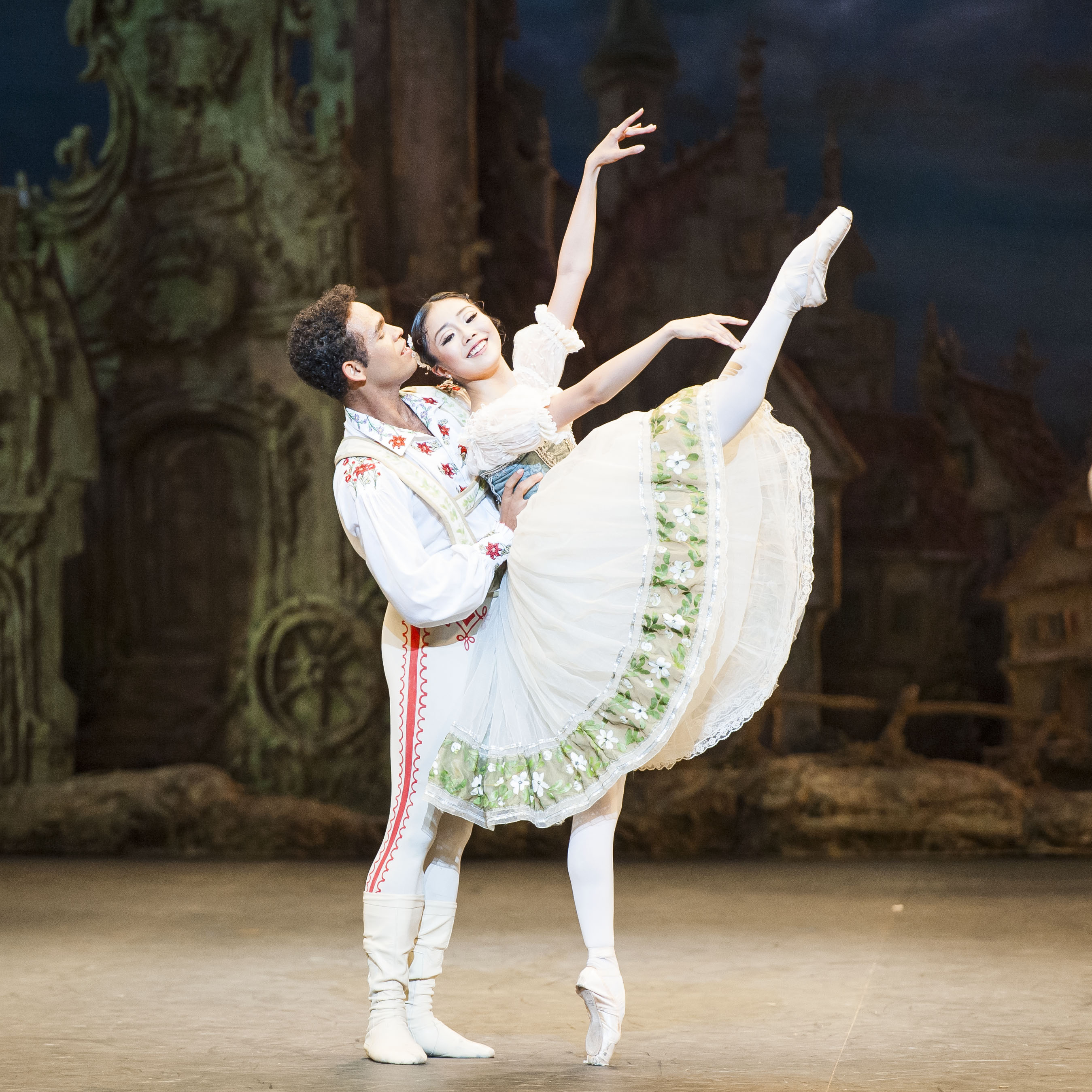 English National Ballet‘s Coppélia continues at the London Coliseum until Sunday 27 July 2014 and will tour to regional venues in the autumn.