Family favourite Peter Pan is the pantomime that will be sprinkling fairy dust over audiences at Milton Keynes Theatre this Christmas.

This year is flying by and there is no greater indication that Christmas is just around the corner than the press call for the official launch of Milton Keynes Theatre’s annual pantomime.

Family favourite Peter Pan will be spreading festive cheer this year and the performers seem just as enchanted by the magic of panto as the theatregoers who flock to see them in action.

Leading the all-star cast in this swashbuckling, hip-hopping, rib-tickling extravaganza is actor, presenter and entertainer Bradley Walsh. Sure to have everyone chuckling when he takes to the stage as Smee  (Captain Hook’s hapless first mate) Bradley is set for a spectacular return to Milton Keynes Theatre.

He previously smashed box office records here with Cinderella (2006) and Aladdin (2007). In fact, #Bradleysback is already trending on Twitter and Bradley couldn’t have been more enthusiastic while speaking to me about his return.

“I am really thrilled to be coming back to do panto here. I seriously can’t wait, I just think it will be awesome. This is a great theatre. It’s a great town and, of course, the audiences are fantastic, as are the staff at the theatre, the crew, the front of house team. Everyone.

It’s going to be brilliant, I’m so looking forward to it!”

Eager Bradley will be accompanied on the deck of the panto pirate ship by sensational street dance troupe Flawless. Their party tricks as a group of pop-locking pirates are guaranteed to take your breath away.

Chatting to Flawless, I was definitely struck by each dancer’s wholehearted enthusiasm for dance and their collective determination to inspire young people to chase their dreams. They demonstrated this in between interviews when some youngsters who were visiting the theatre for a workshop spotted them. The Flawless boys swiftly stopped rehearsing their moves to pose for photographs with fans. 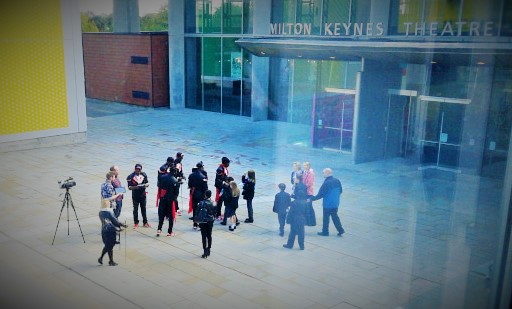 The head choreographer of Flawless, Marlon “Swoosh” Wallen, told me:

“The show is going to be jam-packed with singing and dancing and it’s really going to be the first of its kind with us as the pirates. We’re giving it a proper modern twist.”

Keeping this motley crew in shipshape will be Olivier Award-winning West End and Broadway stalwart David Bedella as Captain Hook, the biggest baddie in all of Neverland. American David has been performing for 34 years and ‘Peter Pan’ will be his third pantomime. As the sword-wielding villain of the piece, he is determined to be worthy of your very loudest boo and hiss.

David was eager to let me in on the secret behind portraying the perfect pantomime villain.

“The perfect pantomime villain has to be the perfect blend of certain ingredients. Captain Hook needs to be bad, scary, funny, lovable and just a little bit vulnerable.

George Ure (who has recently been touring nationwide as Boq the Munchkin in Wicked) will play the title character of Peter Pan, the mischievous boy who refuses to grow up.

Finally, actress and presenter Victoria Tyrell will reprise the role of Wendy, having performed as the character last Christmas at Richmond Theatre.

“As a performer it is rewarding to be challenged and just to get as many experiences as possible. I’m really looking forward to ‘Peter Pan’.

I’ve never done any flying before either, so I am probably most excited about flying!”

The countdown to Christmas time has officially begun so prepare for your festive flight to Neverland and “hook” those tickets now.