Ahead of their onstage antics, the troupe met with Georgina Butler to show off some moves, talk about dance and share their efforts to revolutionise pantomime. 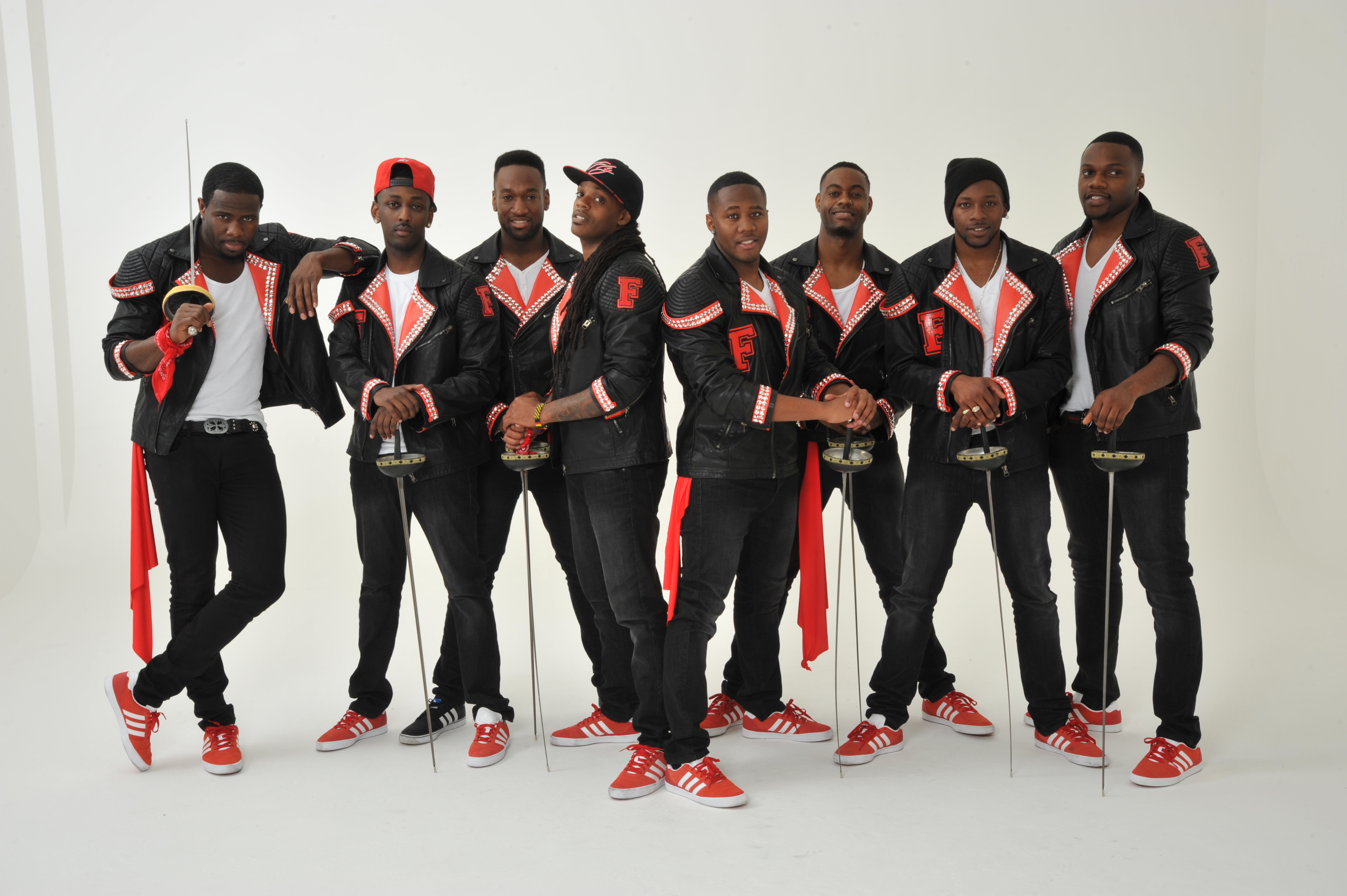 Flawless seem far too well-mannered to be ruffians aboard Captain Hook’s ship but they are setting sail for plenty of swashbuckling fun as the pirate crew in Peter Pan at Milton Keynes Theatre this Christmas.

Members Marlon “Swoosh” Wallen, Christian “Bounce” Alozie, Paul “Steady” Steadman, Nathan “Neo” Gordon, Allan “Boogie” Kabeja, Leroy “Fx” Dos Santos, Paul “Breakz” Samuels and Nathan “Oddey” Kabongo were in high spirits on the day I met with them at the launch of this year’s pantomime. Wielding their swords (fresh out of the box, these definitely had the novelty factor) and moon-walking the plank alongside co-star Bradley Walsh, the street dancers cheerfully cavorted around on a pirate ship set and readily posed for the clamouring photographers.

Before anchoring themselves to the tables laid out ready for interviews, Flawless were whisked away to record a short segment for television. While they were rehearsing some fancy footwork outside the theatre, a few children happened to walk by and excitedly spot the troupe. Following their launch into mainstream entertainment on Britain’s Got Talent, Flawless are instantly recognisable and deservedly popular so it was heartening to see them abruptly abandon their routine and cluster around the youngsters to sign autographs and join in fan selfies.

Flawless are very vocal about the merits of hard work (as their name suggests, these guys always aim for perfection) and resolute in their aim to inspire their young fans. The champion dancers blew audiences away with dazzling performances on Britain’s Got Talent in 2009 and their undeniable talent has enabled them to conquer all sorts of exciting challenges since. Their wide-ranging accomplishments include enjoying mammoth national tours; featuring in two films; collaborating with Kylie Minogue at the Diamond Jubilee Concert; headlining at the opening of the 2012 London Paralympics Ceremony and even uniting with English National Ballet. 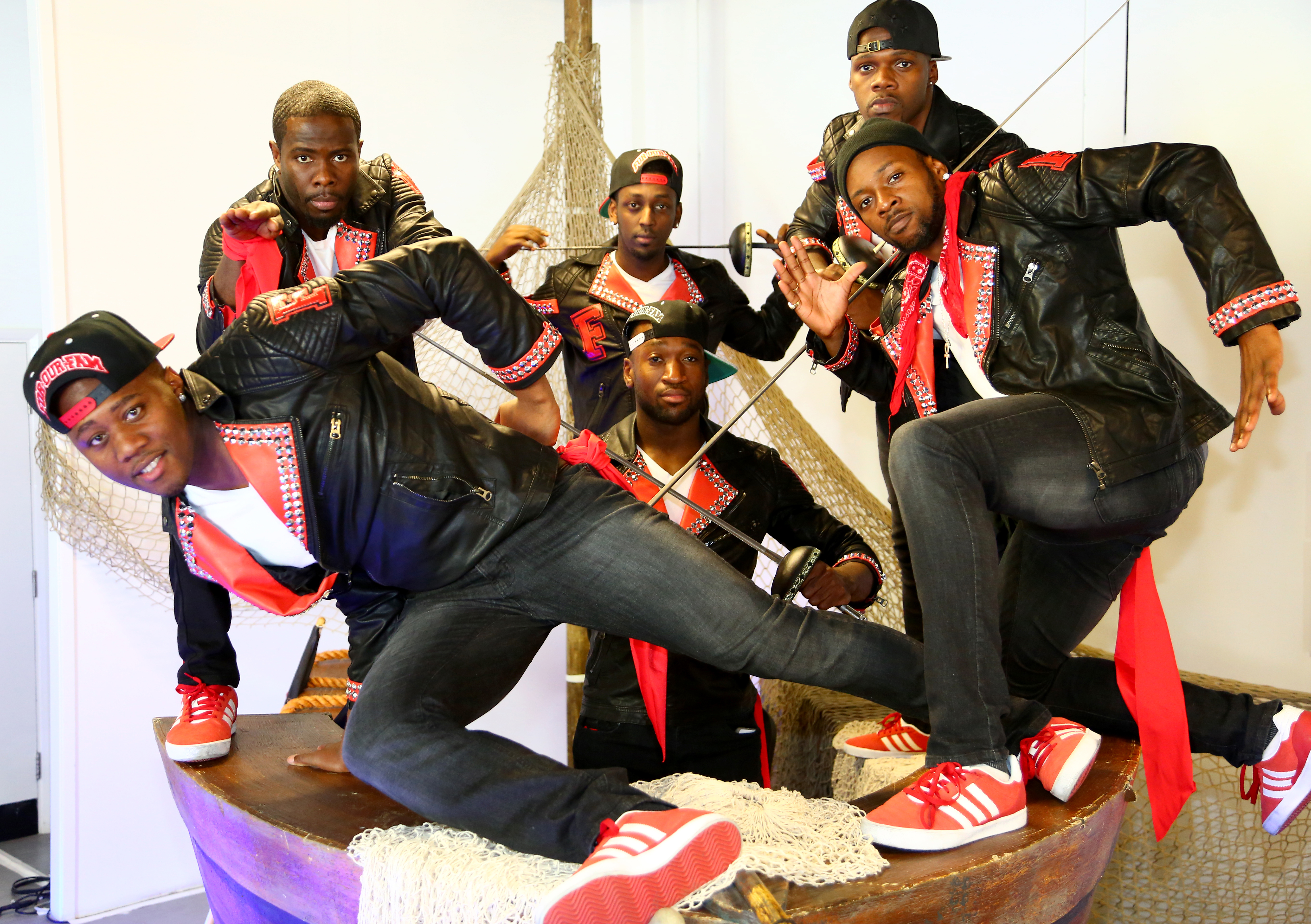 When my time to say “ahoy” to the boys from Flawless came around, I was introduced to them as a journalist – and a ballet dancer. So, of course, one of the very first things I was falling over myself to ask them was: “You didn’t tour to Milton Keynes when you collaborated with English National Ballet but do you think you will ever join forces with them again in the future?” and, although I didn’t quite get an “aye aye” in response, there were nods and smiles all round.

Head choreographer “Swoosh”, seated beside me, answered: “We are often asked about the ENB collaboration and, yes, we would definitely be up for a repeat of that. Audiences really loved it so fingers crossed we might be able to bring it back and we could bring it to Milton Keynes this time just for you!”

Well, of course, it wouldn’t be just for me! Still, I am looking forward to seeing Flawless strut their stuff in this year’s pantomime as I was unable to see them perform during their visit to the new city with Flash Mob (a varied production featuring dance stars from the small screen) earlier this year.

Swoosh adds: “Last time we were in Milton Keynes we were only here for a very short time on tour and we really did not see much of it. As we will be here for longer during Peter Pan, we really must check out what the hype is and discover what is on offer for ourselves. The theatre itself we love. It is a really good space with a great atmosphere and the audiences were really responsive during our last visit.”

Audience response is what Flawless are all about. They positively ooze passion for dance and are almost evangelical when speaking about their hopes to inspire others. They create a buzz of excitement when they move in unison during routines but just being in their presence is a pleasure. They are just so enthusiastic about what they do and eager to spread the word about the joys of dancing, performing and striving to reach your full potential. 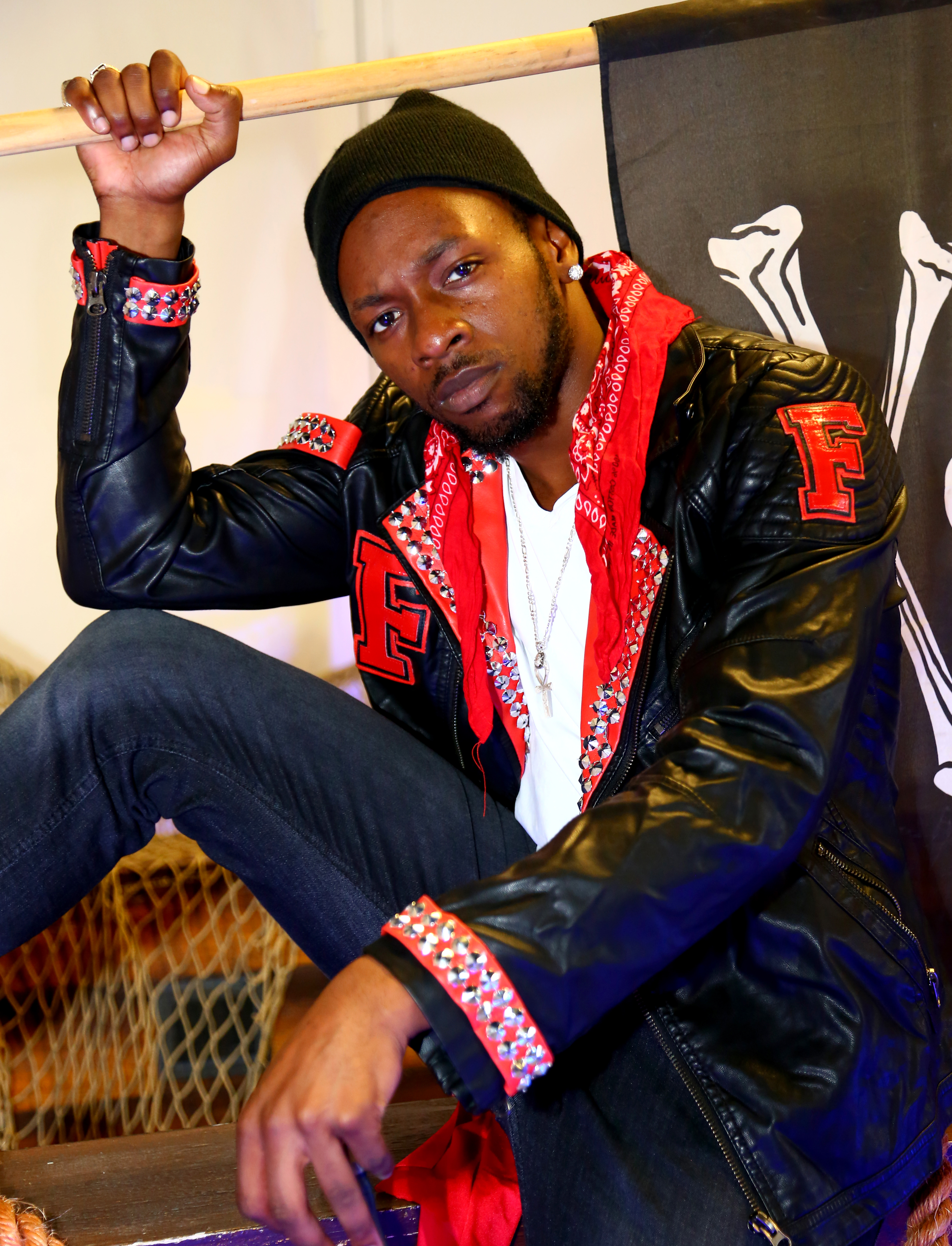 Flawless artist and choreographer Allan “Boogie” Kabeja taught himself hip-hop, popping and locking as a youngster, before completing a BTEC National Diploma in Dance (during which time he studied ballet and contemporary technique, alongside other styles). He then furthered his training at The Urdang Academy.

Boogie said: “We have all trained in different styles and we take our inspiration from each other, always looking to push on and challenge ourselves and be as creative as we can be. Hopefully we can inspire others to dance and do what they love as well.

Nathan “Oddey” Kabongo (who was completely self-taught before becoming one of the first members of Flawless) added: “We’ve all danced from an early age and been inspired by the likes of Michael Jackson. We’re fortunate to be in the position that we can now influence others and get street dance recognised. It’s great to be in a pantomime because we reach all sorts of audiences and show them how amazing dance can be, whoever you are and whatever style you are interested in.”

Flawless have an urban edge and perform hardcore street dance moves yet retain a sophistication within their slickly executed choreography. They are just as assured when chatting about dance – each member is easy-going and enthusiastically answers my copious questions. After suggesting that the troupe’s collaboration with English National Ballet demonstrates a commitment to advancing their own approach to dance – and seeking confirmation that their motto is “chase the dream, not the competition” – I have to ask: what advice do they have for aspiring dancers?

Nathan “Neo” Gordon (who studied contemporary, jazz and ballet as part of his Dance degree course at Middlesex University, while also pursuing work in hip-hop and street dance) declared: “You have got to be open to different styles, challenge yourself and always push on and chase your own dreams. There is always more to learn and different ways to fuse styles together, that’s what keeps it so interesting to choreograph and watch.”

As a passionate singer, dancer, actor, presenter and choreographer (with special interest in developing his skills in contemporary dance technique, Bboying, popping, locking and gymnastics) Fx is well-placed to offer such advice – as are all the artists in the group. No matter how effortlessly cool Flawless seem, it is still apparent that these dancers give their all to do well at what they love. 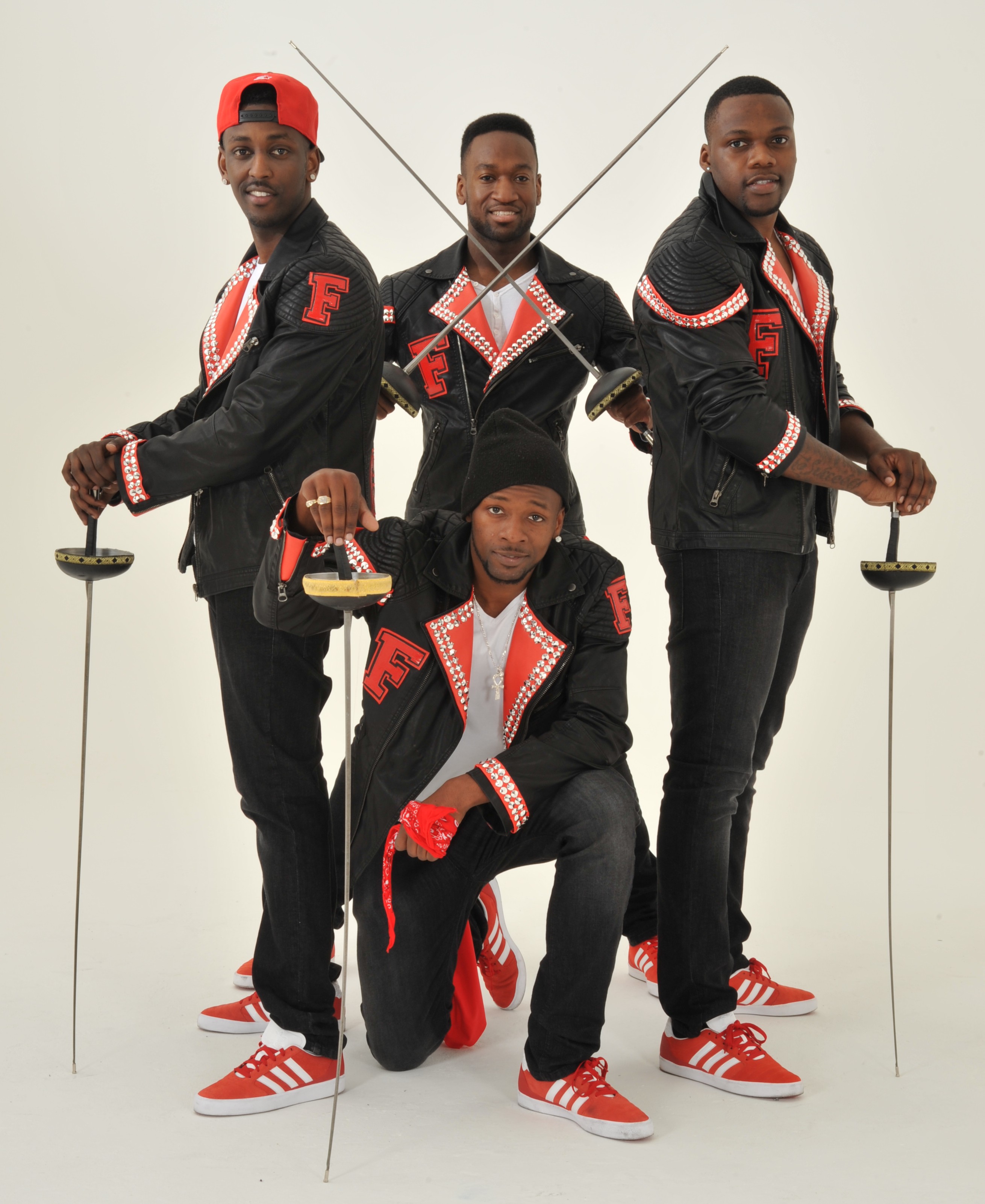 Agreeing, Oddey followed with: “And be prepared for knock-backs and for failure because until you have failed a few times you don’t really know what it is like to succeed and failure can just motivate you to push on and get where you want to be.

Neo added: “Definitely. Learn from your mistakes and get into the mindset that failure is necessary on the way to success. But you will ultimately get there.”

Acts such as Flawless bolster the image of dance for boys. Their exciting routines demonstrate that dance can be dynamic, expressive, full of strength and incredibly impressive – for girls and guys alike. Still, a stigma may persist and boys who dance might feel self-conscious about their chosen hobby. With this in mind, I asked: what advice do Flawless have for boys who dance?

Swoosh answered: “Do it for you. If others don’t get it, let them get on with it. Dance is cool and I think things are really changing with all different styles being out there and dance featured in more places like TV, pantomimes, theatre and on location.”

Nodding, Neo added: “Dance is dance so enjoy it whatever style is your passion. Growing up boys might be shy about dancing and others can be sceptical but if you put the work in and have a direction you want to take it in, there is nothing to hold you back.” 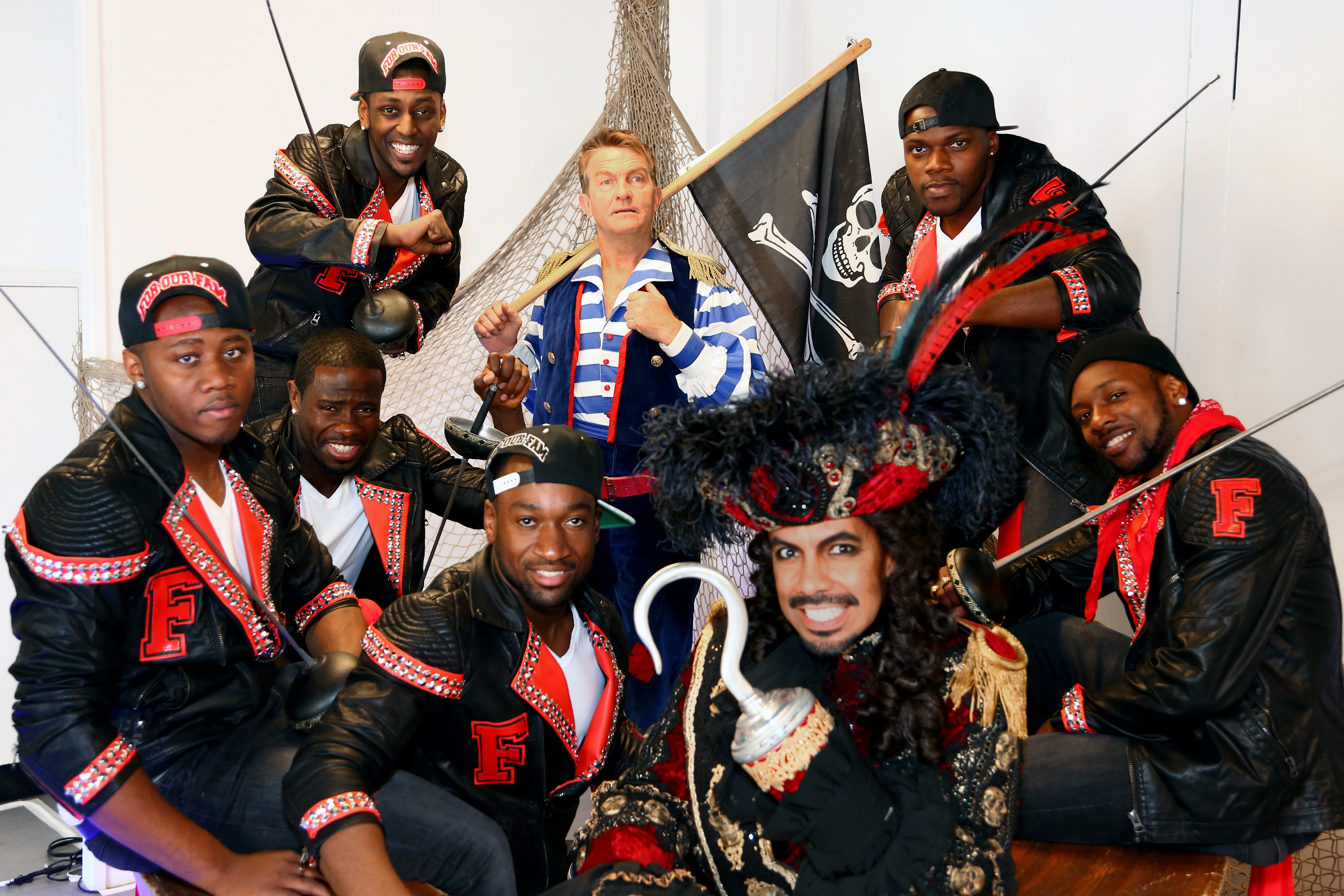 There is certainly no holding Flawless back. Peter Pan at Milton Keynes Theatre marks a continuation in their efforts to bestow the great British tradition of pantomime with some renewed street cred!

Neo revealed: “We performed in our very first pantomime two years ago in Bristol. It was Aladdin and no one had ever really done what we do in a pantomime ever before. Then, last year, we brought our moves to Aladdin at New Wimbledon Theatre and the response there was great too. We are just putting a real modern twist on things and showing how dance can be used to entertain and excite in all different settings.”

The experience of performing in pantomime was even more special for Paul “Steady” Steadman who had never seen a panto live until appearing in one himself. He said: “It was a real experience to see it all come together and discover just how much content and work goes into a great pantomime. There has been a big development in pantomimes, just in the last few years. This is really like the next generation now! We’ve gone well beyond slapstick – the shows are huge productions which feature full-on dance.”

Grinning, Boogie said: “Yes, that is exactly it. It’s a new generation of panto!”

A new generation of full-on dance is surely guaranteed with Flawless waiting in the wings. The boys do all their own choreography and are eagerly anticipating spending the festive period showing off their moves.

As Swoosh said: “Flawless are definitely 100% into bringing dance and performing to the stage and getting everyone interested so pantomime is ideal for us. People of all ages go to the pantomime and we hope that everyone will enjoy what we do when we give the pirates a unique Flawless edge. People might only go to the theatre once a year, just to see the pantomime, so we want to make Peter Pan at Milton Keynes Theatre as engaging and entertaining as we can. For us, it’s definitely about making dance and theatre accessible and sharing in that passion.”

Flawless will perform as a group of pop-locking, hip-hopping pirates in Peter Pan alongside Bradley Walsh, David Bedella, George Ure and Victoria Tyrrell at Milton Keynes Theatre from 5 December 2014 to 11 January 2015.