You don’t go to see a pantomime without expecting some kidding around and Peter Pan at Milton Keynes Theatre is guaranteed to bring out the child in everyone.

This year’s Yuletide extravaganza is an awfully big adventure that gives the tale of the boy who refuses to grow up a swashbuckling new lease of life.

Excitement was in the air when I attended a marvellous matinee performance on Friday. With Christmas Day itself less than a week away, youngsters from local schools – including Deanshanger Primary, Springfield Lower and Woodland Middle – were ending the term in seasonal style with a festive theatre visit.

Pantomime is probably one of the first experiences that most children have of the theatre. Going by the wide smiles and screams of delight (as every juvenile in the auditorium joined in with rounds of “he’s behind you”), the next generation of theatre-goers are well and truly hooked! 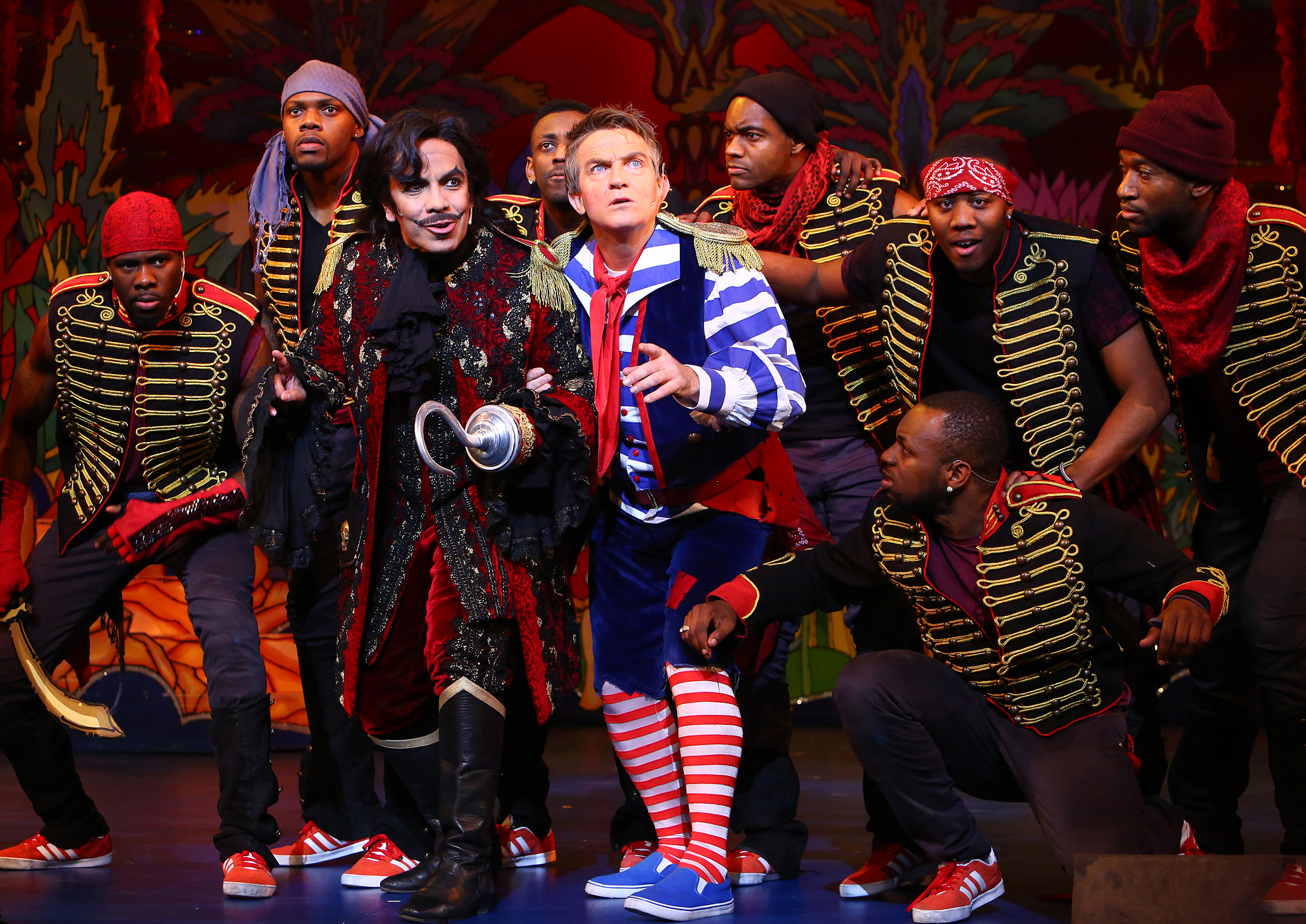 As pantomimes go, Peter Pan is a trifle perplexing. No dame, no prince, no princess, and no celebratory wedding. Fortunately, sword-fighting pirates, mystical mermaids, and the sheer wonder of the flying scenes go some way to make up for these dramatic deficits.

There is no doubt that brilliant casting makes believing in the magic of Neverland and embracing the fun of pantomime just that little bit easier.

It has been seven years since comedian, presenter and actor Bradley Walsh broke box office records appearing in the new city’s 2007 pantomime, Aladdin. Milton Keynes Theatre considers it a real coup to be able to declare that Bradley is back on their stage (#Bradleysback even started trending on Twitter) and this panto star continues to shine brightly. 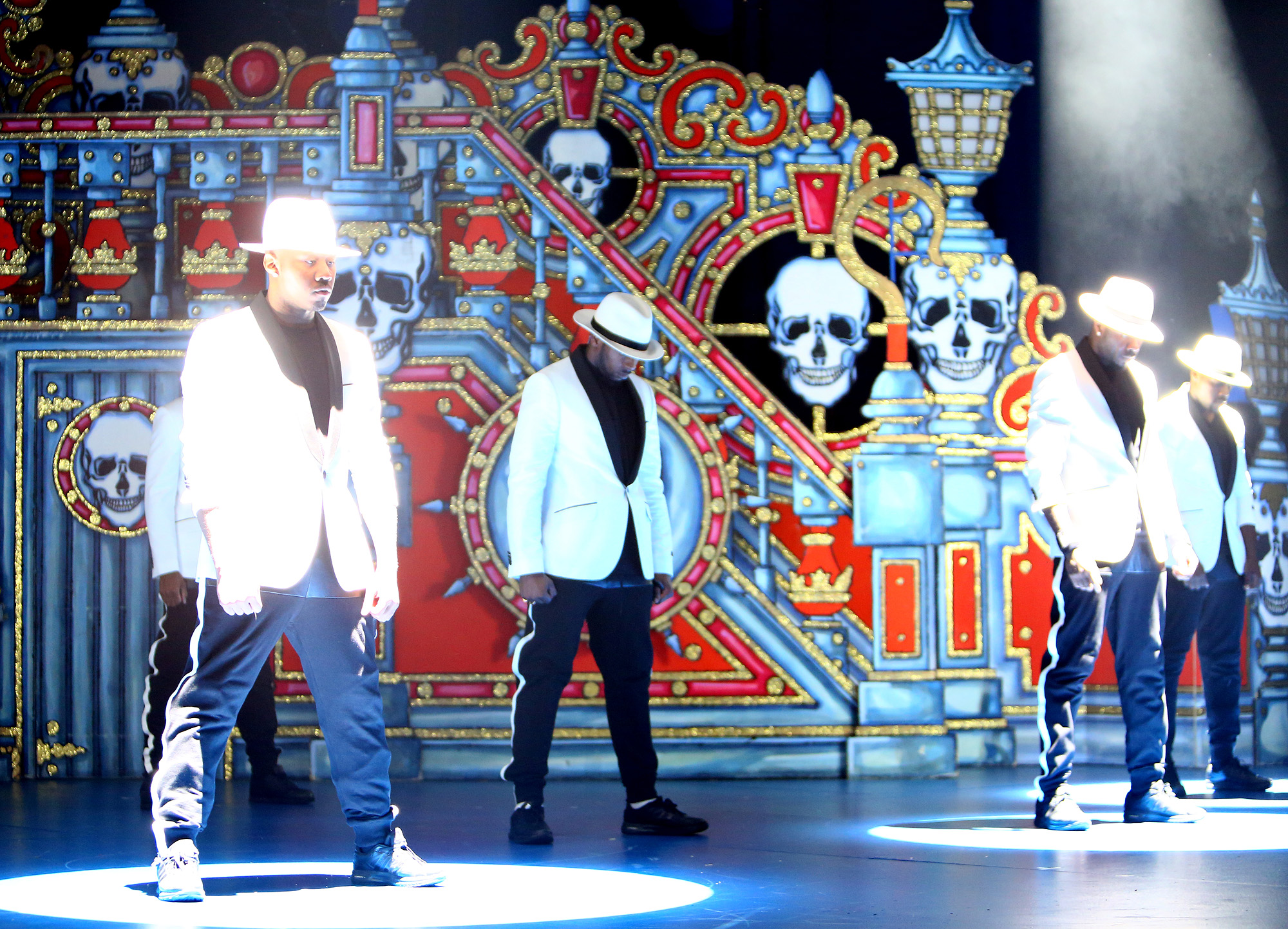 The consummate cheeky chappy, Bradley leads the cast as Captain Hook’s bumbling first mate, Smee. He steals scenes with world-weary wisecracks (side-splitting fun for the little ones and amusing for grown-ups too) and keeps the whole production ticking along via neat comic timing and assured ad-libbing.

A rollicking rendition of ‘The Twelve Days of Christmas’ provides opportunity for Bradley to deliver even more traditional panto cheer (savour the silliness!). Later, his role supervising the obligatory onstage audience participation passage sees him judging a sea shanty sing-off.

This well-practised pro is joined by Britain’s Got Talent finalists Flawless, who perform as a motley crew of hip-hopping, body-popping pirates. 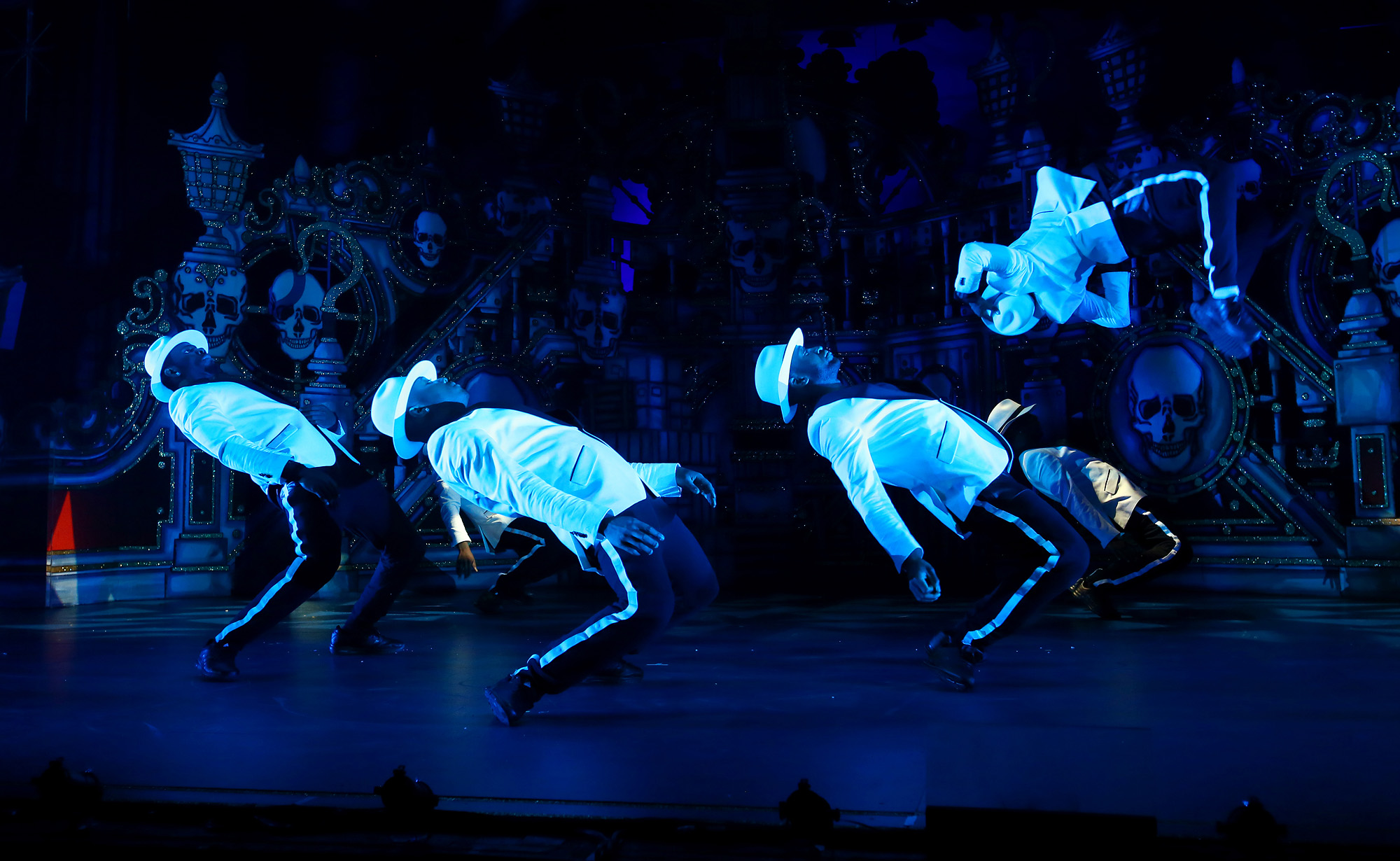 Flawless most definitely live up to their name. These dynamic dancers move in uncanny unison and have a vast repertoire of tricks – including back-flips, head-spins, balances and some whirlwind, windmill b-boy acrobatics.

They are particularly impressive when dancing as the cruise cabaret act aboard the decks of the Jolly Roger. Each electrifying move is executed with effortless precision. To add to the spectacle, their flashy dancing is matched by thrilling lighting effects and a gaudy, glittering pirate ship set.

Admittedly, Flawless are not overly convincing as a terrifying band of buccaneers. Still, their sword-fighting is top-notch and they prove to be great sports when a gurning Bradley (hilarious!) is being taught how to be a proper pirate.

Incidentally, I did ask Bradley at the press launch for Peter Pan whether we would be seeing him strutting his stuff with Flawless. Somewhat bemused, he said: “Look at them and then look at me – and you tell me whether you think I could hold my own dancing with Flawless!” Nevertheless, he does conga with them during the show, exclaiming: “We came, we saw, we conga’d”. 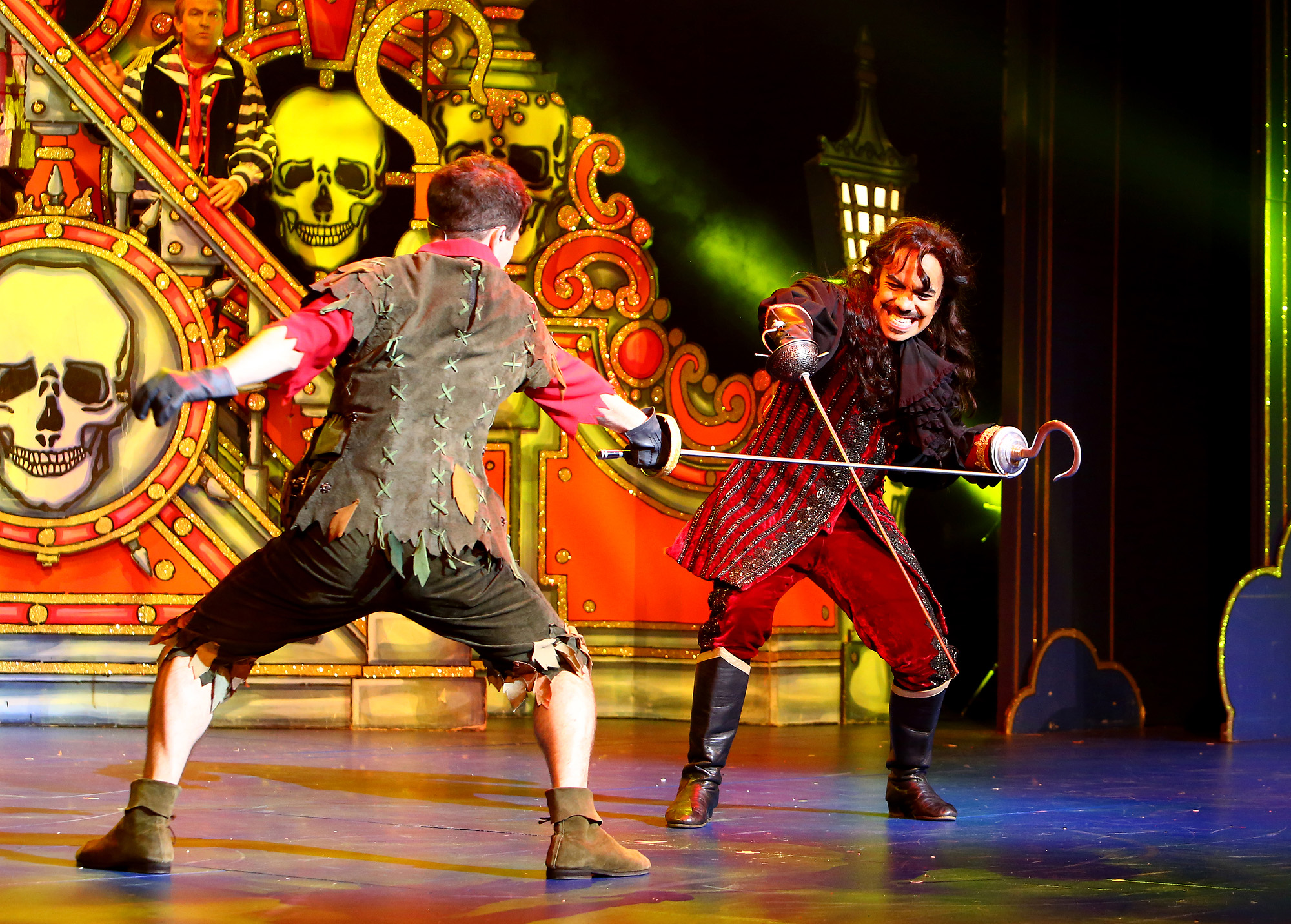 Someone who unquestionably holds his own when dancing with Flawless is Olivier Award-winner David Bedella as baddie Captain Hook. David is a real showman. He has a megawatt smile and smooth vocals, so his Hook is a very charismatic corsair. Add his enthusiasm for indulging in some silly slapstick humour to the mix and you will soon find yourself agreeing when he intones “don’t you just LOVE me?”.

Victoria Tyrrell is a delightful Wendy Darling. She plays the surrogate mother to the Lost Boys of Neverland with just the right ratio of innocence to maturity. Meanwhile, George Ure enchants as Peter Pan – he sings, acts, dances and flies like a superhero. George starred as Boq in Wicked at London’s Apollo Victoria Theatre, as well as touring nationally with the production, and his West End star quality is obvious.

I particularly enjoyed the number just after Wendy has mastered hovering and starts soaring skywards with Peter. They hit all the high notes and seem to be having the time of their lives, cavorting around in the air while singing their hearts out to Kelly Clarkson’s ‘Breakaway’.

Of course, Peter Pan would never encounter Wendy if not for the naughty fairy, Tinker Bell. Sassy Francesca Mills stirs up trouble playing the diminutive diva and is a hoot to watch as she flits about (both in the air and on roller skates). 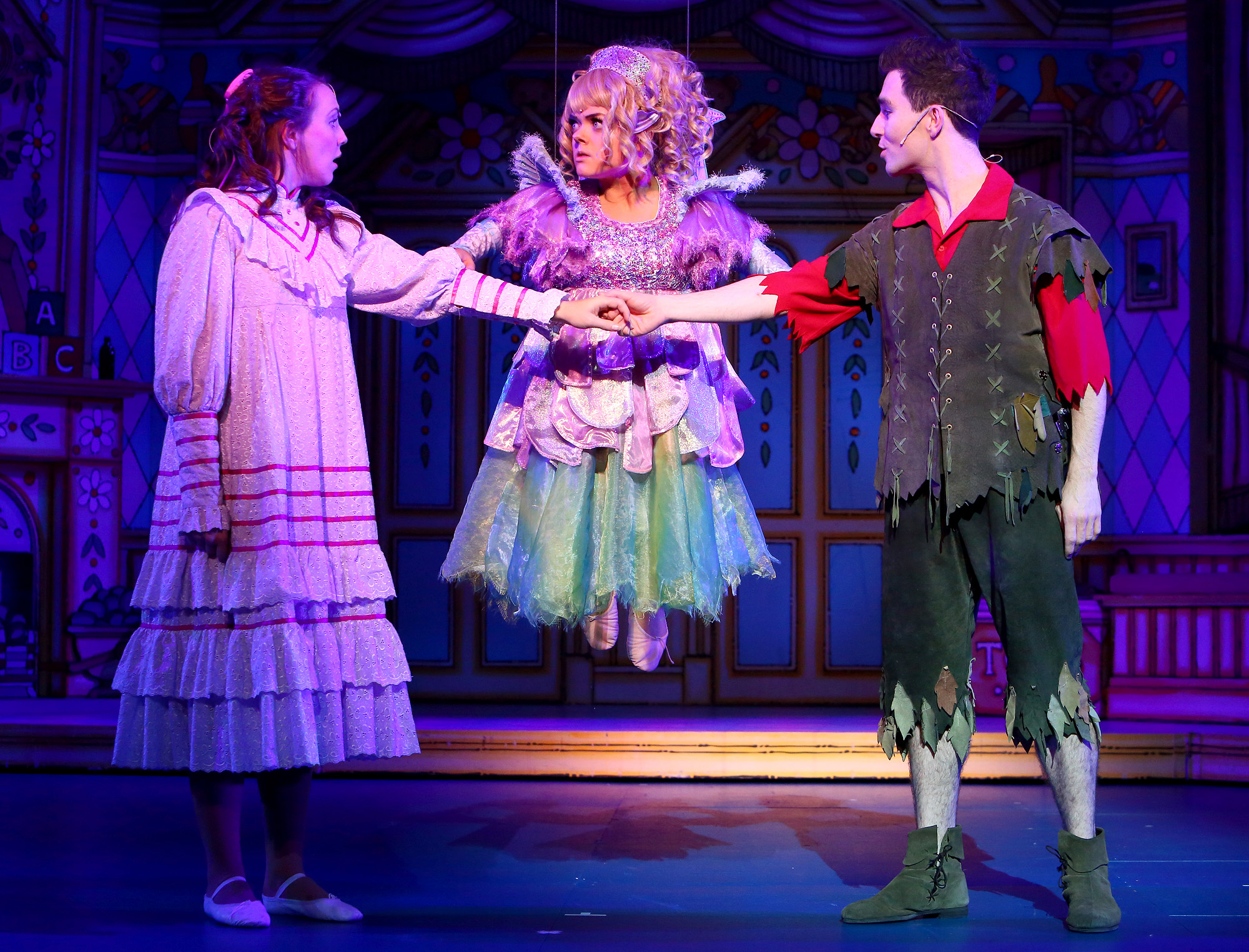 Special mention also has to go to Shane Knight. He performs as the Darling family’s giant St. Bernard dog Nana, the Tick-Tock Croc, a peculiar pirate and an Indian. Presumably he spends all of his off-stage time in quick change!

All in all, this is a treasure trove of a pantomime. Immensely enjoyable and incredibly contemporary, the show boasts chart-topping hits, sensational dance sequences and slick production. Yet, buried just below the bling is all the sought-after silliness of traditional panto. 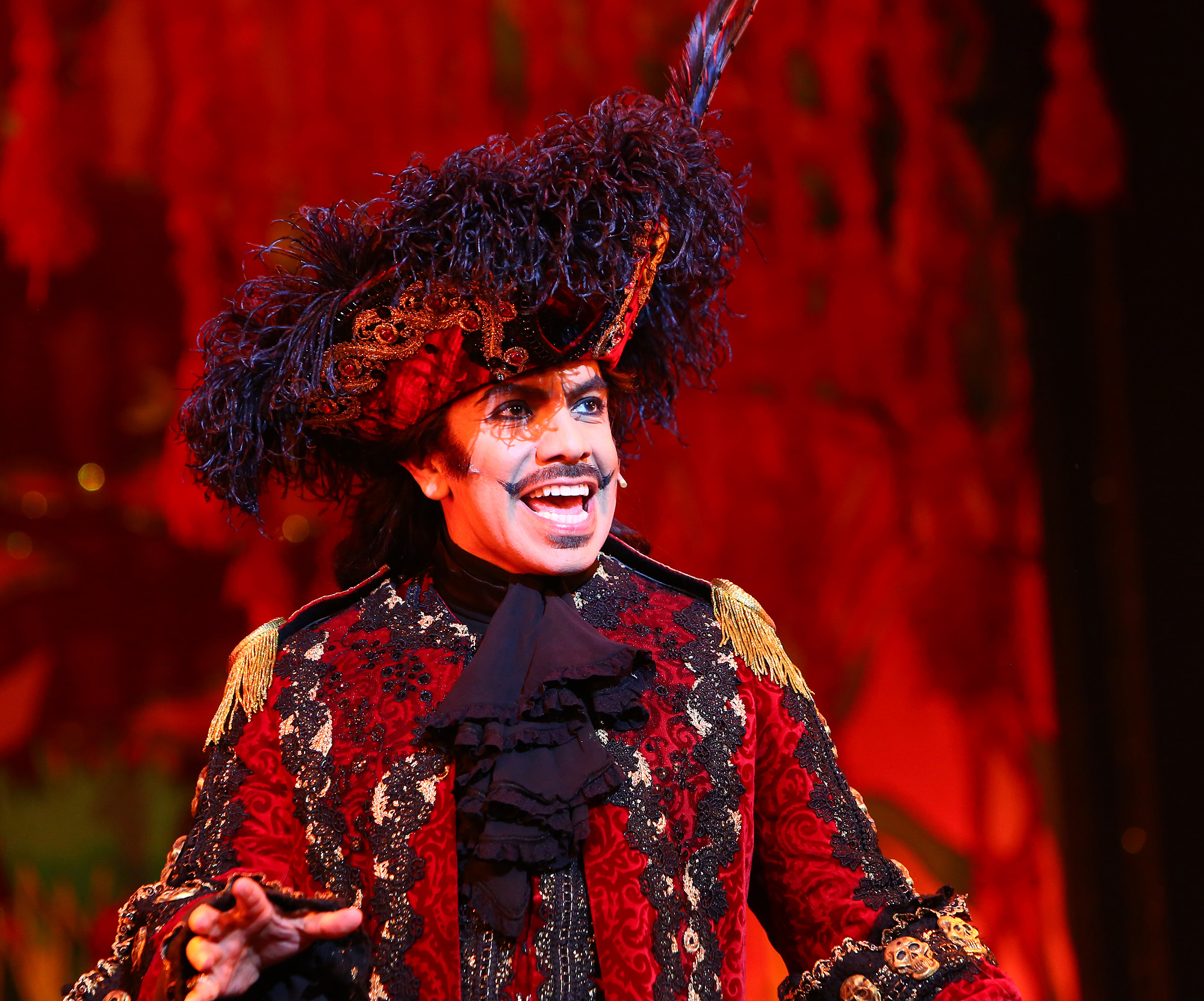 This review was also featured on the Milton Keynes Citizen website.