Dancer Tim Hodges has featured in pop videos, performed in the West End, and toured the UK and beyond in hit musicals.

Currently cast in Matthew Bourne’s production of Edward Scissorhands, Tim found time between rehearsals to talk to Georgina Butler about how this witty, modern fairy tale carves a place in audiences’ hearts.

Inspired to pursue dance professionally after seeing videos of Mikhail Baryshnikov, Tim Hodges began dancing as a youngster in Milton Keynes at the Woollard Tiffin School of Performing Arts before winning a place at Tring Park.

Now, aged 29 and starting to inspire the next generation of dancers through his own teaching, Tim Hodges is thrilled to be touring the United Kingdom as part of Matthew Bourne’s company, New Adventures, in Edward Scissorhands.

I spoke to Tim before he attended today’s class and afternoon rehearsals to learn more about his life as a dancer and quiz him on what makes this Bourne show “a cut above” the rest. 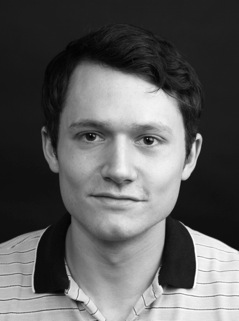 Any dancer will agree that daily class is absolutely vital. What are classes like with New Adventures? Do you have a favourite part of class? Or a signature move that your classmates would associate with you?

We have company class and rehearsals then follow on from that. With New Adventures, class is either contemporary or ballet, just because of the variety of styles that makes this company what it is. So teachers and classes are scheduled weeks in advance for wherever we are on tour and we get given our timetables so we know what, where and when! Sometimes teachers are from within the company and sometimes they are external ones that are brought in.

My favourite part of any class – ballet or contemporary – is generally towards the end, when we get jumping and moving a lot more. The first part of class is all about warming up and getting the muscles ready but then once you get to the allegro section you are warm and feeling ready to really dance. To jump and leap.

I don’t really have a signature move but I suppose my “thing” is big dancing. Jumps and really moving through space.

You like to move and make an impact then! Talking of big things, you have performed in lots of big productions (including Singin’ in the Rain, Dirty Dancing, Chicago, Cats, We Will Rock You) as well as in music videos for Sam Sparro and The Pippettes. What advice do you have for aspiring dancers who would love to get to where you are now?

My advice to any dancer is to throw yourself into dance as much as you can. Every experience will help you and if you really want to make dancing and performing your career then you definitely have to chase it. Work hard because you definitely won’t get there without hard work! But in this industry it’s also so much about luck and timing. You have to be in the right place and auditioning for the right place and the right role and it has to be for casting that is available when you are free. So if the time is not right you find yourself waiting for things to work out.

But it really is just such a fantastic industry to be in. I love it more than ever now and I am really fortunate to have never had a bad time. It makes you feel so lucky to be able to do what you are passionate about and be able to call it a job. It is almost bizarre that what I do is work because I enjoy it so much!

Particularly for boys, I would say that you just should not be scared of any experience and do not be scared of ballet. My wife set up a dance school not that long ago and we find that the boys we have taking classes are sure that ballet is just about the girliest thing you can ever do before they give it a go. It’s not! And for any dancer it really is the basis of everything, it gives you everything you need for any kind of dancing. I remember growing up watching videos of Mikhail Baryshnikov dancing those really virtuoso solos and wanting to be able to do it just like him. I still cannot quite do some of it but it was that inspiration that drove me on and helped me find my passion. So my best advice is probably do not be afraid of doing what you want to do! 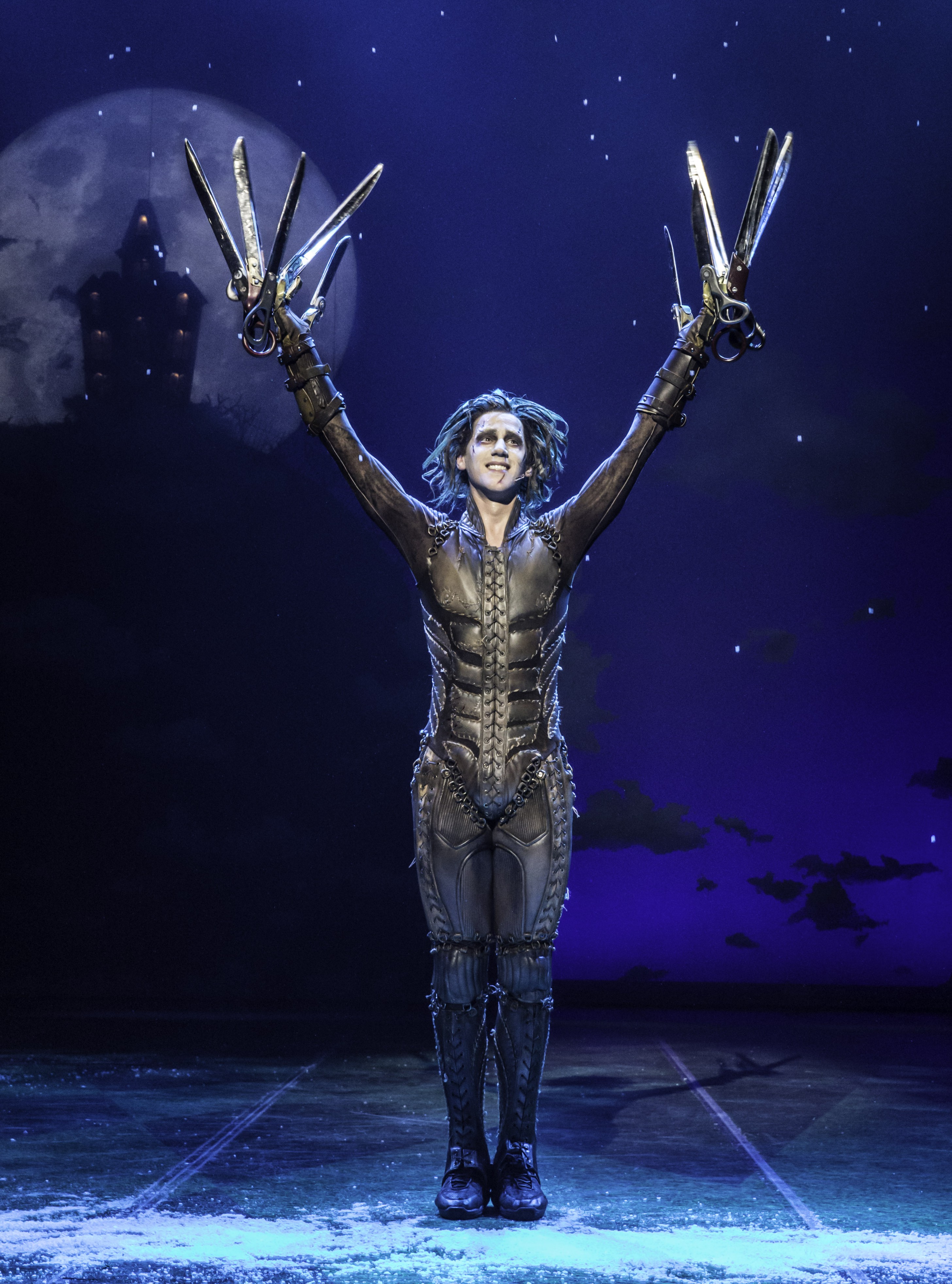 Edward Scissorhands is the bittersweet story of a boy created by a lonely inventor who dies, leaving him alone, unfinished and sporting scissors as hands. Whenever I see a Matthew Bourne production I am impressed by how witty and clever his adaptations are and find myself marvelling at how skilfully he develops his characters. What is it like as a dancer to perform in Matthew Bourne’s shows?

I performed in Matthew Bourne’s Swan Lake last year which is really hard physically with lots of ensemble dancing. It is in many ways just like a full-scale normal ballet with everyone playing similar characters like in a classical corps of girls — we were all individual guys but we were dancing as one so we did not get to develop any individual characters.

Edward Scissorhands is completely different because everyone has their own characters. I play either Bill Boggs who is Edward’s sweetheart Kim’s father; or Jim Upton, the son of the mayor of the town who is officially Kim’s Jock boyfriend before Edward arrives.

Whichever character I am cast as for a performance, I play that role all show. So it is really interesting because I get to play a parent as Bill or a child – well he is seventeen so a teen – as Jim, and get into the character.

When I am dancing as Jim I think of it as a series of short sprints because he has high-energy bursts of dancing which are broken up by ten minutes offstage before another high-energy appearance. Jim does have a nice dance with Kim at a barbecue. We call it “The Jim and Kim Dance”.

The role of Bill is steadier but I particularly enjoy a Christmas swing dance at the end of the show when I get to do a bit of improvised “dad-dancing”. I have a lot of fun with that as, within reason, I can do whatever I want! 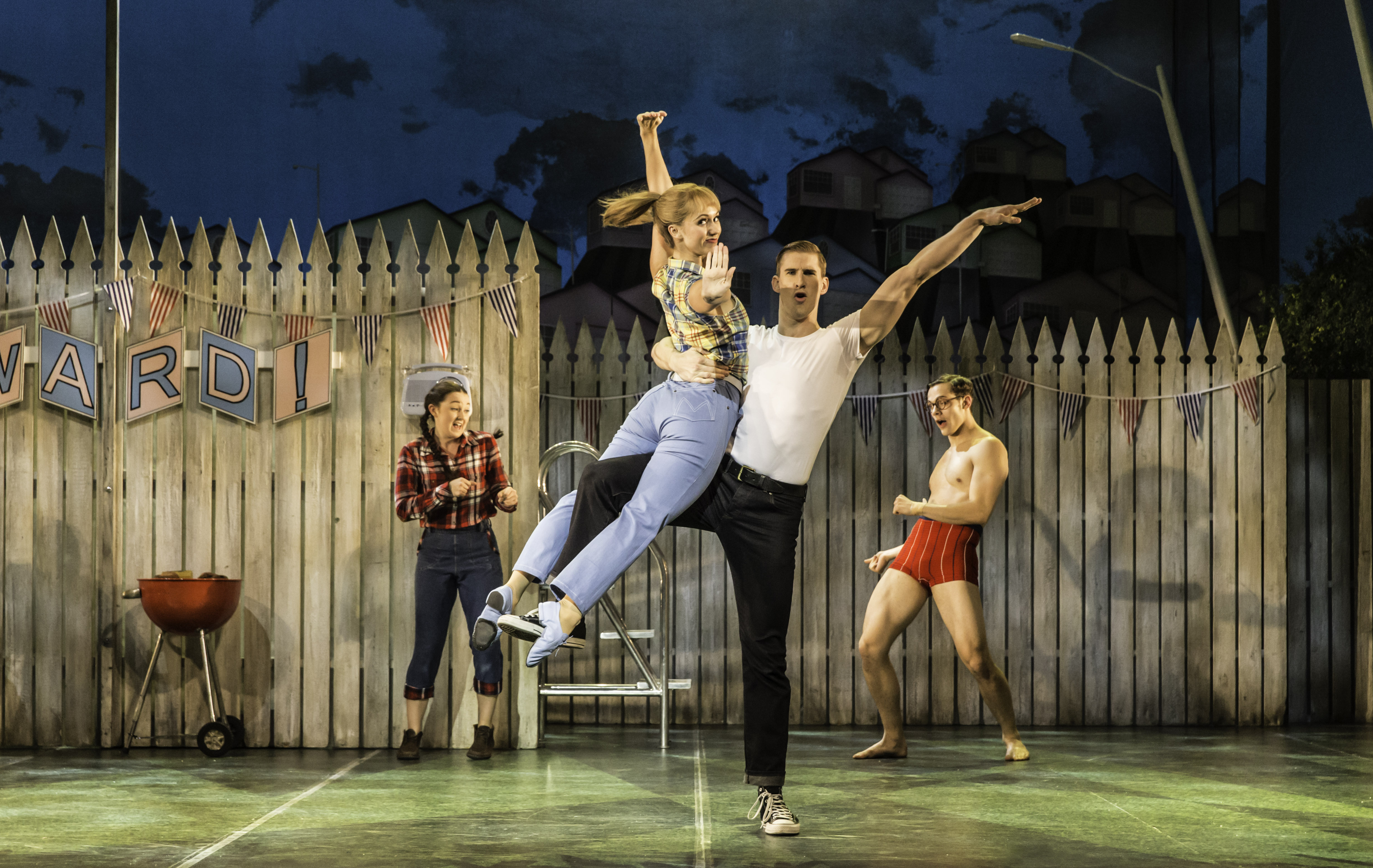 I am excited about seeing the show already and I know that even theatregoers with only a passing interest in dance look forward to seeing a Matthew Bourne production. Are we right to be eagerly anticipating the show’s arrival here in Milton Keynes? What should audiences expect?

Matthew’s work is so well-received everywhere we go. Especially stuff he has done before. He really makes accessible dance that has such a strong narrative and a lot of humour which everyone can understand. He puts elements in that anyone will find funny.

For example, there are moments when Edward – being pretty good with his unique scissor-hands – cuts bushes and shows off his topiary skills. People do not always know what to expect with Matthew Bourne’s work; it’s a very different style of show. Sometimes audiences might expect that we will start singing but we don’t do musicals!

What is so clever is the way he uses humour to draw people in. We are always guaranteed a laugh after the interval when people see what has happened to a poodle that passes Edward! 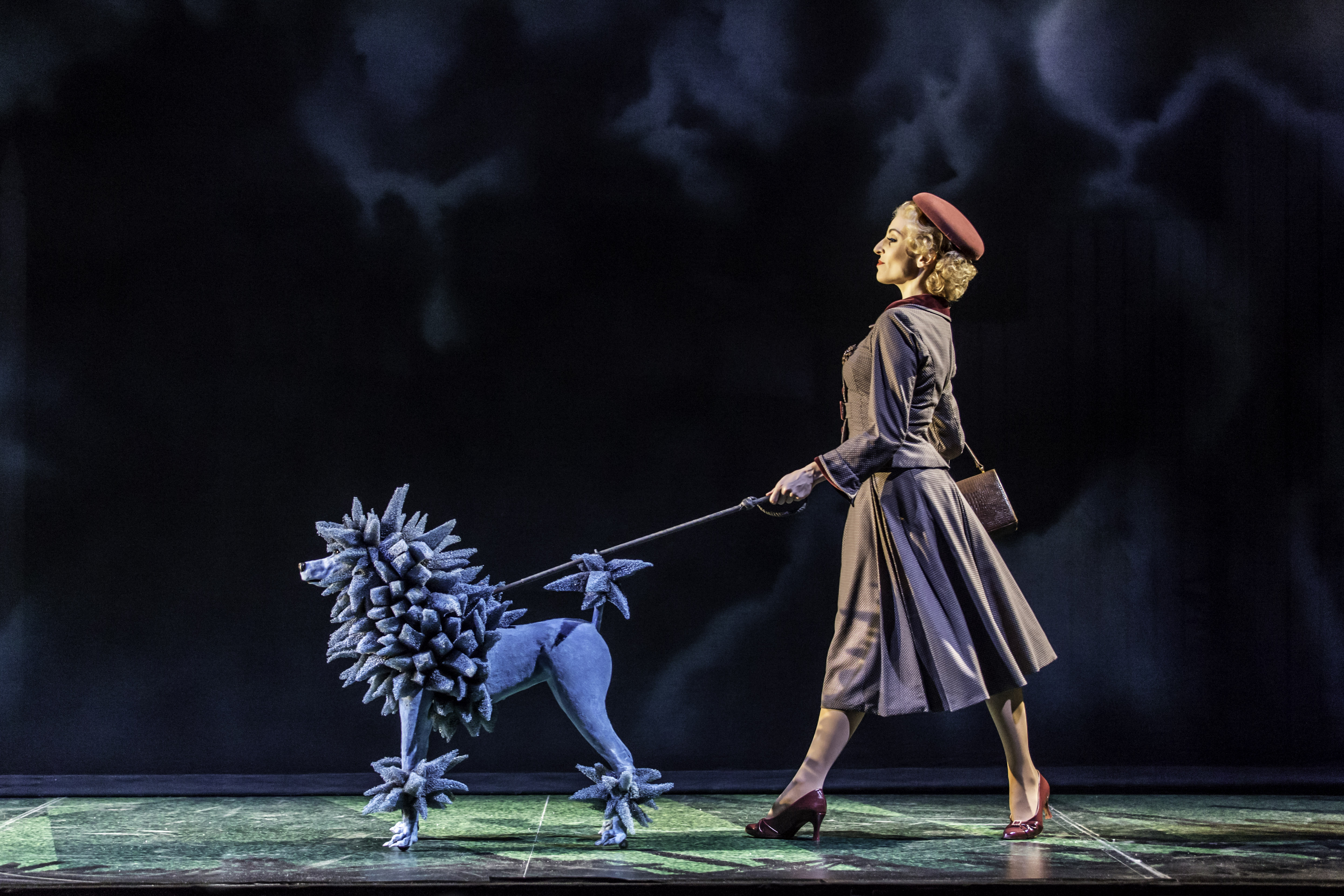 Matthew knows how audiences react because he really studies and reflects on their responses. Even our bows at the end of the show are changed sometimes if he has a new idea. I suppose it is all to make people appreciate the show even more! He has a real attention to detail and is a people-pleaser. He knows what he is doing.

Edward Scissorhands has really got a bit of everything. Humour, romance, drama. The romance between Edward and Kim starts off awkwardly but it is beautiful and the big overriding story is of acceptance and how we should not be too quick to judge. This finishes in a really powerful moment at the end of the show. It has all the brilliant music and lighting you would expect too and Lez Brotherston’s sets and designs are just amazing.

There is one section when all the ensemble dancers are dressed head to toe in costume as hedges and that is really a sight to see. I did the show seven years ago as well, and then I was in the ensemble so I have danced as a hedge in the past and am actually currently relearning the ensemble role to cover for another dancer who is injured at the moment. So, at some point in the next few weeks, there is a strong chance I’ll be putting on that costume!

We’ve got performances still to go in Liverpool, then we go to Norwich and then Birmingham. And, after that, I’ll be back in Milton Keynes. I’m performing as Bill in a few shows and Jim in others.

Really looking forward to it, I hope audiences in Milton Keynes are too! 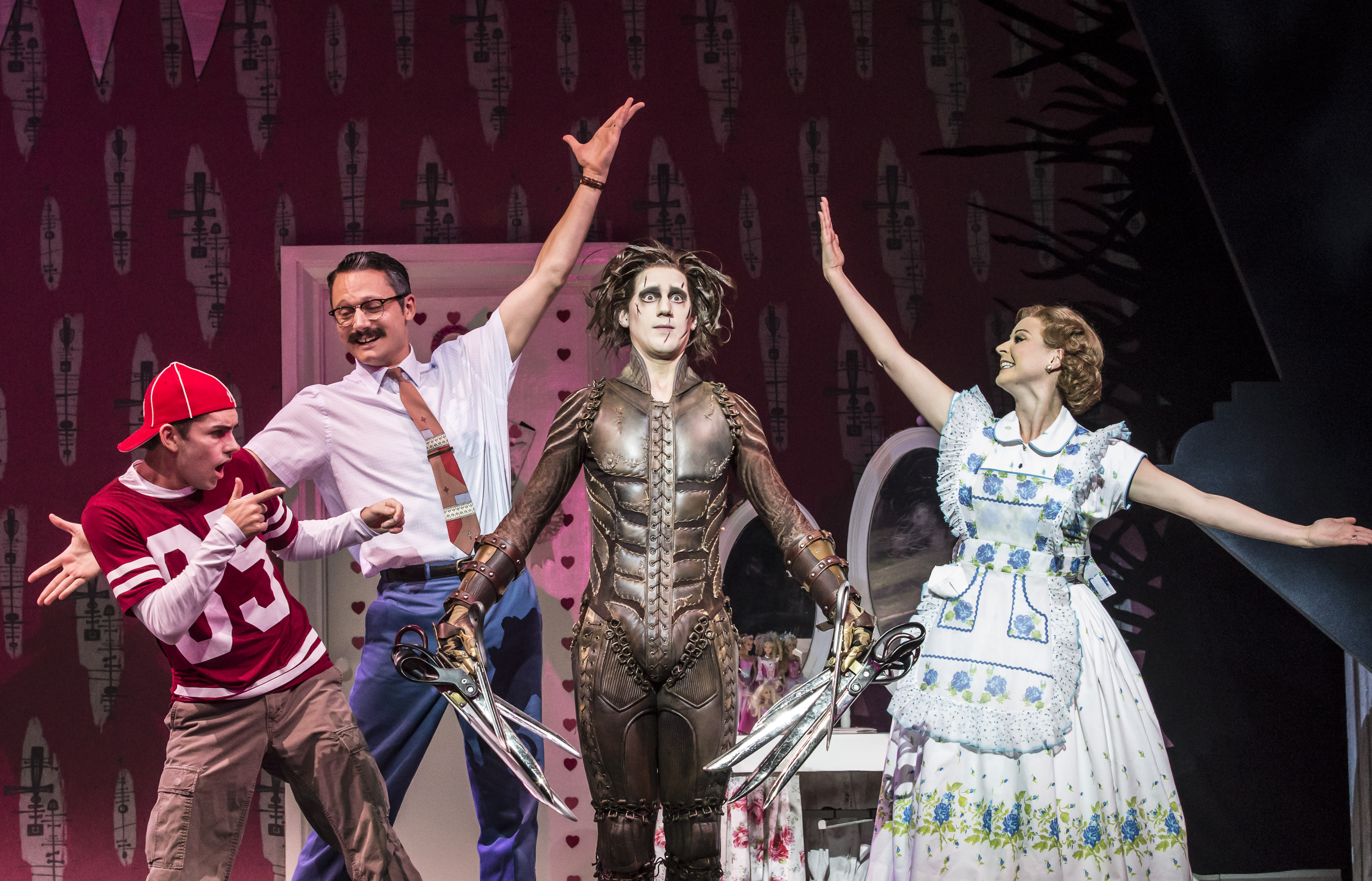