There is something about men in suits who sashay in sequence while belting out a parade of pop hits. Perhaps it is their “silhouettes” or each individual’s ability to “walk like a man”, but the quartet starring in Jersey Boys at Milton Keynes Theatre seem too good to be true as they side-step, sway and strut behind their microphone stands.

Jersey Boys has been seen by over nineteen million people worldwide, and won fifty-five major awards. Firmly established as one of the West End’s longest running and most popular shows, the original London production opened in 2008. Seven years on and it continues to play in the capital, currently raising the roof of The Piccadilly Theatre. Understandably, theatregoers have been clamouring for tickets to see the touring production during its current run here in the new city.

The jukebox musical is the true story of Frankie Valli and The Four Seasons. The world loved their songs but, until this show, knew very little about the lives of the blue-collar lads who sang them. Divulging the secrets of a forty-year friendship, Jersey Boys recounts the experiences of four sons of Italian immigrants who grew up on the wrong side of the tracks in New Jersey. 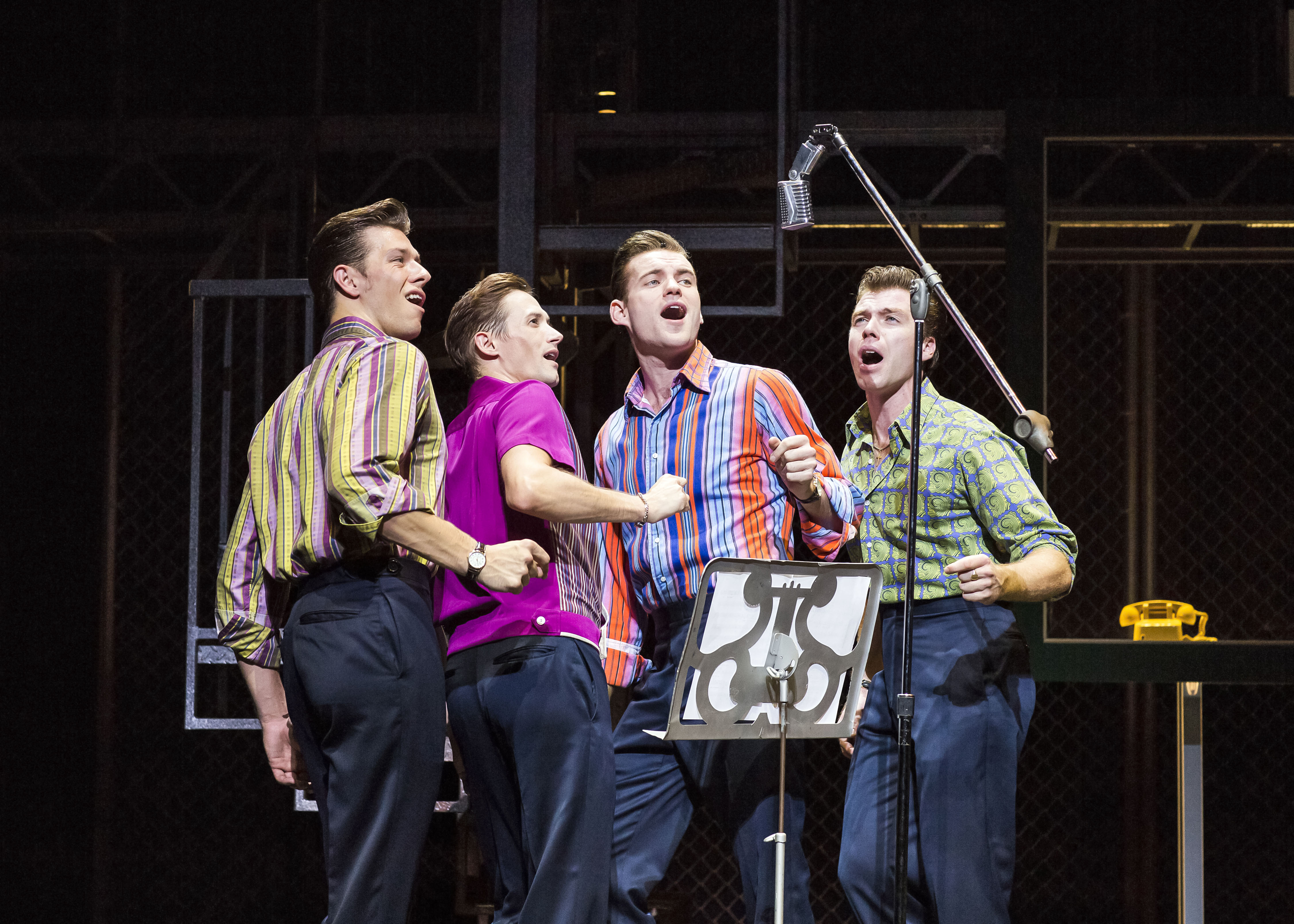 Despite looking dapper dancing side-by-side, these streetwise crooners were no angels. Forever getting into trouble, prison was a revolving door for founding member Tommy DeVito and bass-playing bandmate Nick Massi. Little Frankie Castelluccio (the one with the megastar voice who would prosper under the stage name of Valli) also participated in the crimes that landed the others behind bars, yet was spared – apparently thanks to his vocal talents.

Eventually, the trio made some progress carving out a career in music but struggled to find their niche. In fact, even acquiring an enduring band name seemed beyond them. It was not until they joined forces with the then one-hit-wonder songwriter and keyboardist Bob Gaudio (who penned ‘Short Shorts’ for The Royal Teens in the late 1950s) that the freshly-formed foursome rocketed to the top of the charts with ‘Sherry’, in 1962. The group’s popularity was assured once they had achieved three number ones in a row (‘Sherry’, ‘Big Girls Don’t Cry’ and ‘Walk Like A Man’). Still, Jersey Boys exposes how even this meteoric rise to fame could not free these guys from the poverty and Mafia connections of their formative years.

Taking inspiration from the group’s name (clearly, in due course, the identity crisis is averted and the boys do get around to choosing – and sticking with – a name), the script is split into four seasons. The narrative emerges through four personal accounts, each representing a period of The Four Seasons’ career and told by a different member. Spring acknowledges the group’s very earliest beginnings. Summer marks the dazzling heights of their success. Autumn recognises that such accomplishment can take its toll as troubles disturb the singers and their loved ones. Finally, Winter symbolises a time for reflection, reconciliation and the promise of another Spring to come. This structure is simple yet satisfying. Having each group member in turn speak directly to the audience highlights the conflicting memories the boys have. This provides energy, tension and vibrancy which, when added to the soaring sounds of all their songs, stridently brings the past to life. 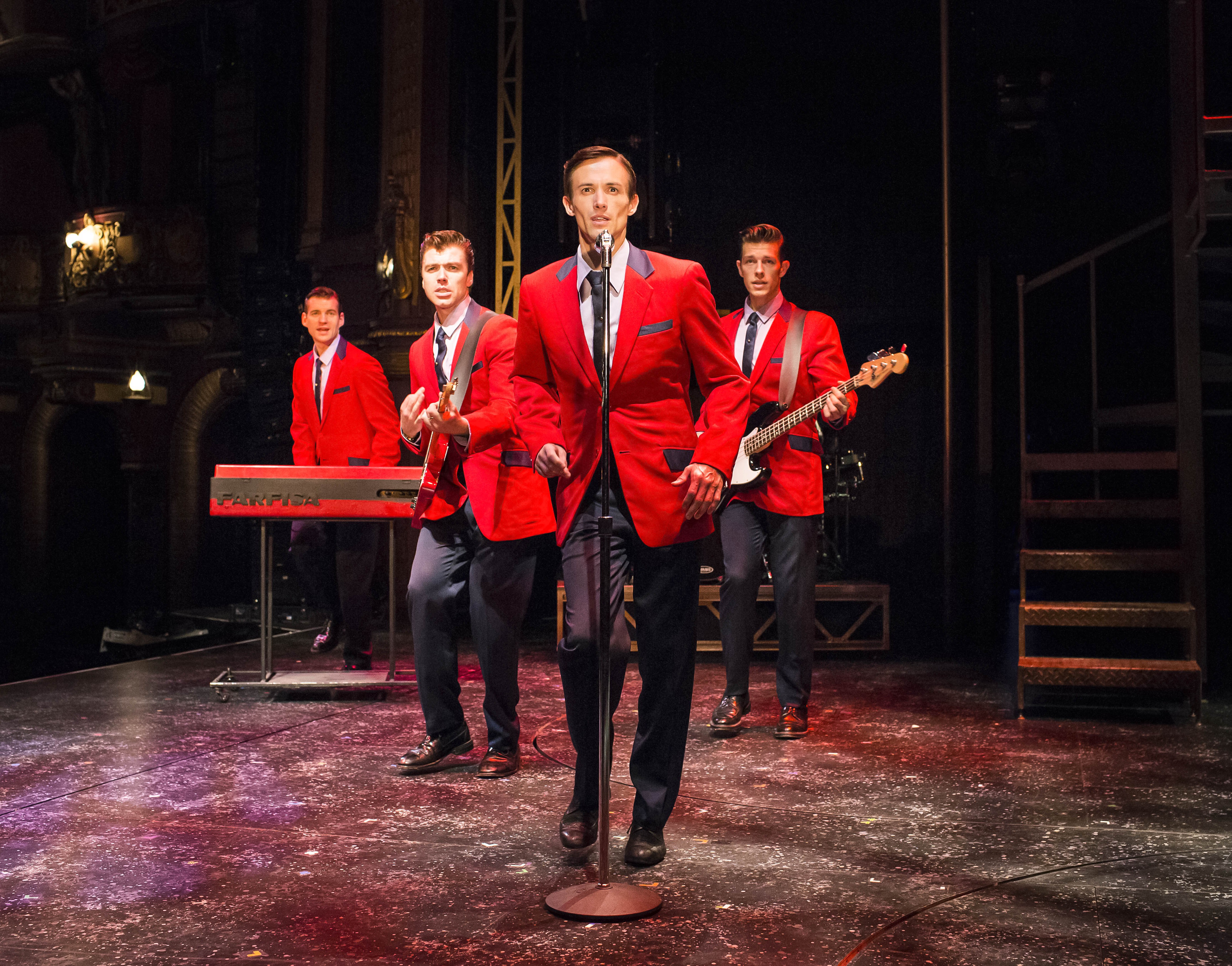 Recreating The Four Seasons’ signature style is no mean feat so let’s hear it for the boys onstage! Tim Driesen (as frontman Frankie), Lewis Griffiths (as finicky Nick), Sam Ferriday (as educated Bob) and Henry Davis (stepping up as an impressive understudy on press night to replace Stephen Webb in the role of tough-guy Tommy) warbled those vintage tunes with panache. Their smooth harmonies and syncopated struts effortlessly captured the distinctive rhythm ‘n’ blues and rock ‘n’ roll flavour of the group’s classic songs.

Tim Driesen was playing Frankie in the Dutch production of Jersey Boys before being cast in the UK tour and he previously starred in the role for a short season in the West End. The Belgian actor hits all the high notes and has awesome vocal range in his big solo moments. He captures the youthful innocence of Frankie as a prodigy and gradually develops the character into a real showman. I particularly enjoyed his knee spins and half splits, as well as his skill spinning the microphone stand under and around his outstretched leg!

Driesen’s absorbing portrayal of the roller coaster of emotions Frankie rides as an ordinary man in extraordinary circumstances matches the calibre of his sky-high falsetto. Scenes with Amelia Adams-Pearce as Mary Delgado, Frankie’s first wife, are a riot as all that red-hot Italian fire combines with New Jersey liberalism towards four-letter words. (It is thanks to straight-talking Mary and her belief that an Italian name should end in a vowel, not a consonant, that Frankie became ‘Valli’ with an “i”, not a “y”.) 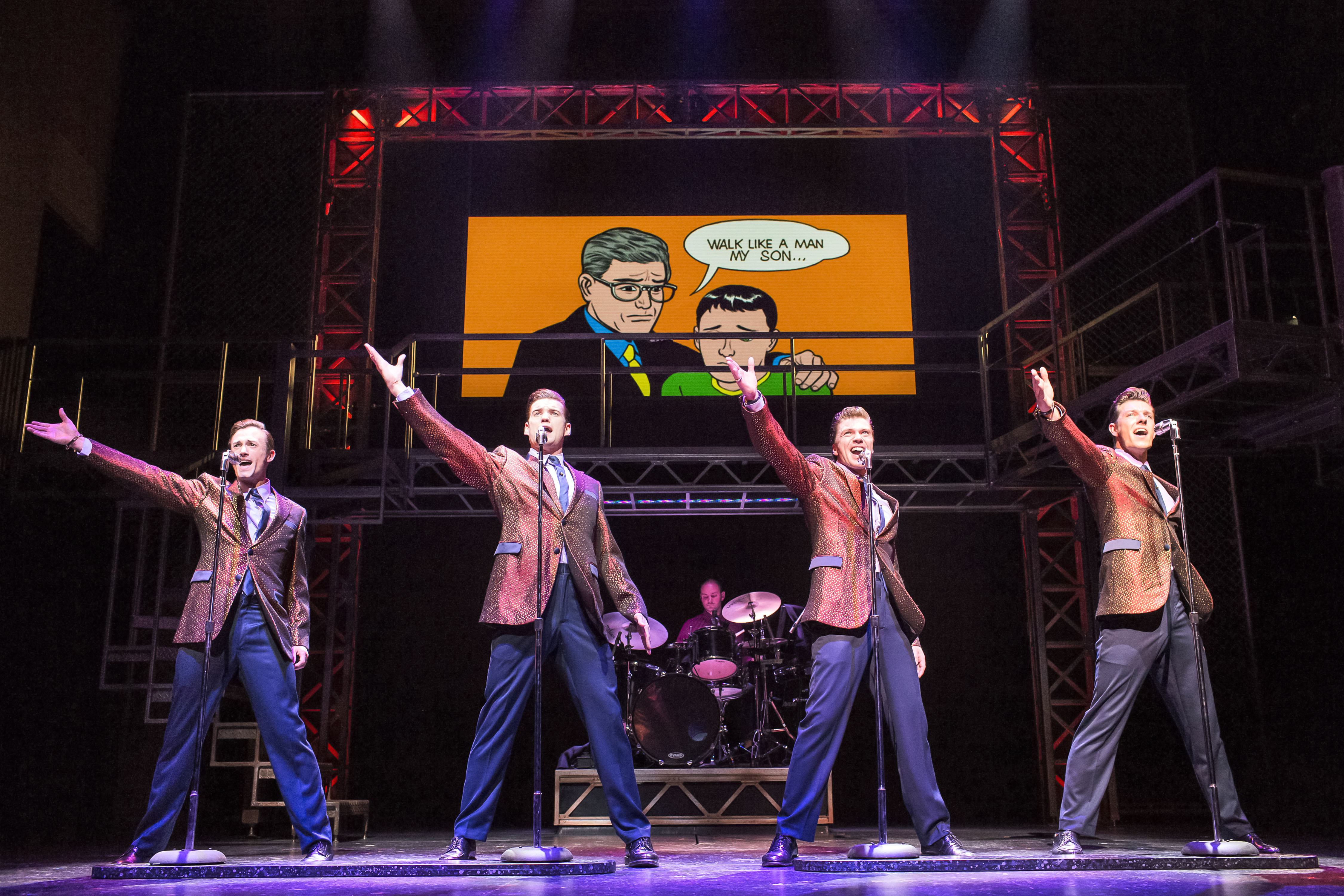 The production is slick, with stark, minimal sets. Screens are used to add to the drama, displaying live footage as it is filmed onstage, and also to provide pop-art inspired imagery during key songs. Gags are used sparingly but they all raise laughs and – although there is little dancing beyond the group’s grooving behind the microphones – the small ensemble are perpetually in motion, adopting different roles and keeping scenes moving.

It proved simply impossible to sit still when watching Jersey Boys. There are so many catchy tunes that you will find your feet tapping, your head nodding, your fingers clicking! Although the audience included a lot of baby boomers, even I – a product of the nineties – recognised many of the songs, especially ‘Big Girls Don’t Cry’ (from Dirty Dancing!) and 70s hit ‘December 1963 (Oh, What a Night)’.

Having witnessed how these boys from New Jersey become “seasoned” performers, I can see why Jersey Boys has such an ongoing appeal. Sensational songs, superb singing and a scintillating story.