A couple of cheeky elves conjure up magical shoes that are made for dancing in Northern Ballet’s latest captivating production for children, Elves and the Shoemaker.

Inspired by the 1806 Brothers Grimm fairytale, Elves and the Shoemaker tells the story of a poor, hard-working and benevolent shoemaker called Bertie and his caring wife, Bettina. Despite their own struggles to make ends meet, they are extremely generous souls who go out of their way to help others. They become the recipients of an act of kindness themselves when two elves, named Tap and Stitch, pay them a visit one night.

These sprightly creatures transform the shoemaker’s very last piece of leather into a pair of magnificent shoes. They are a perfect fit for the next customer who enters the store and the sale means the delighted shoemaker has enough money to restock his workbench. To his amazement, the industrious elves return on multiple occasions and produce footwear to entice an assortment of shoppers. How will the shoemaker and his wife ever repay these helpful visitors? 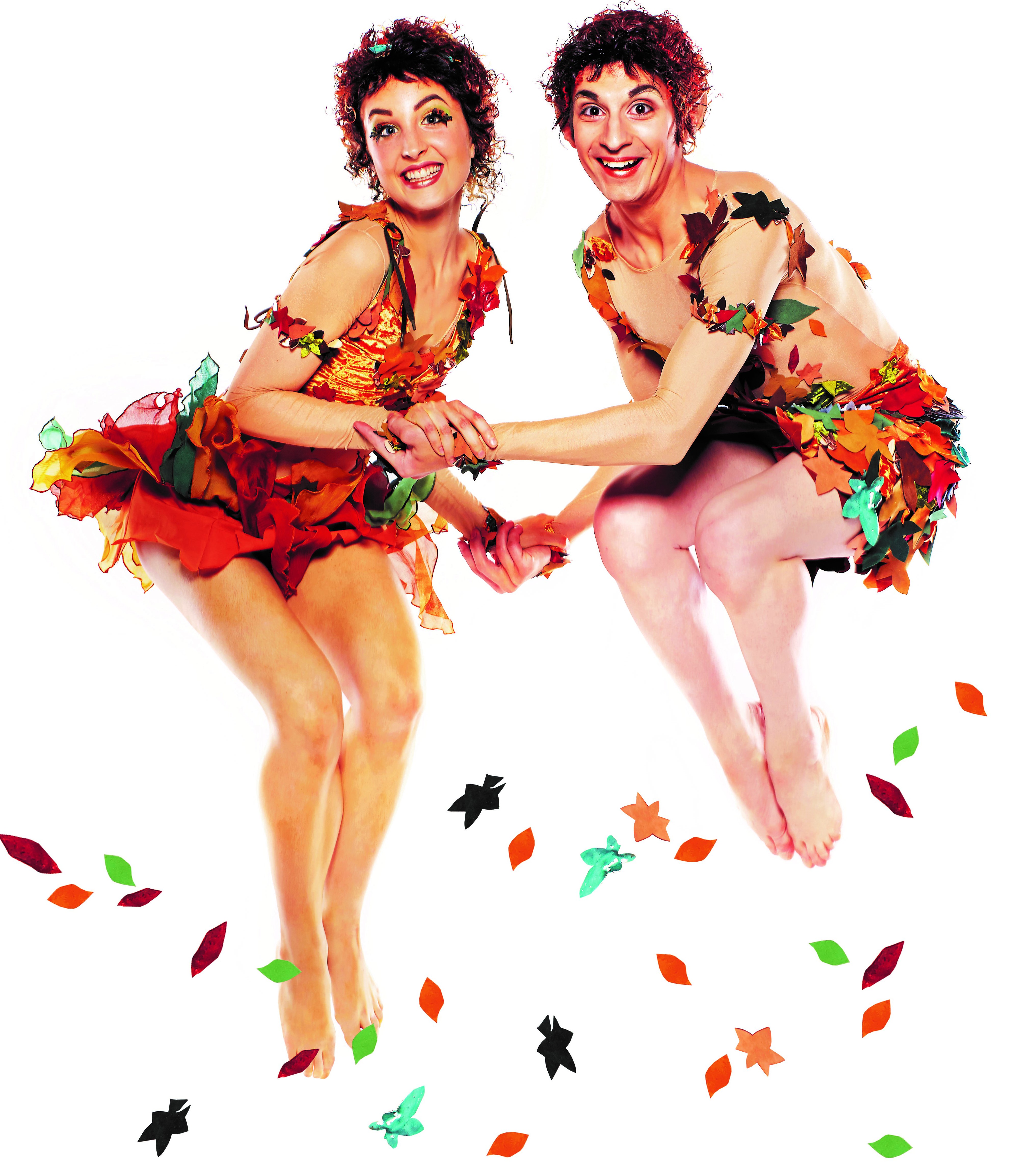 Elves and the Shoemaker is the third instalment in Northern Ballet’s Short Ballets for Small People series, designed to introduce children and their families to ballet and the theatre for the first time. The uplifting yarn has been translated into a lively and engaging 40-minute fusion of dance and drama. It is guaranteed to entertain little ones and adults alike.

The company’s dancers first dipped their perfectly pointed toes into the uncharted waters of child-friendly performances with Ugly Duckling in 2013. This endearing show made a spectacular splash in theatres on tour and a Children’s BAFTA award-winning television adaptation for CBeebies saw the cast entertain tots in living rooms up and down the country. Unsurprisingly, last year’s offering of Three Little Pigs blew kiddies (and grown ups) away and a second CBeebies collaboration meant the trio of plucky piglets also trotted their way onto the small screen.

These two short ballets have been seen live by more than 30,000 people and on television by more than 1.4 million people. Elves and the Shoemaker is currently on an extensive national tour and will have its London première at The Linbury Studio Theatre in the Royal Opera House on Saturday 16 May. This is the first time one of the Company’s ballets for children has been performed in Covent Garden. 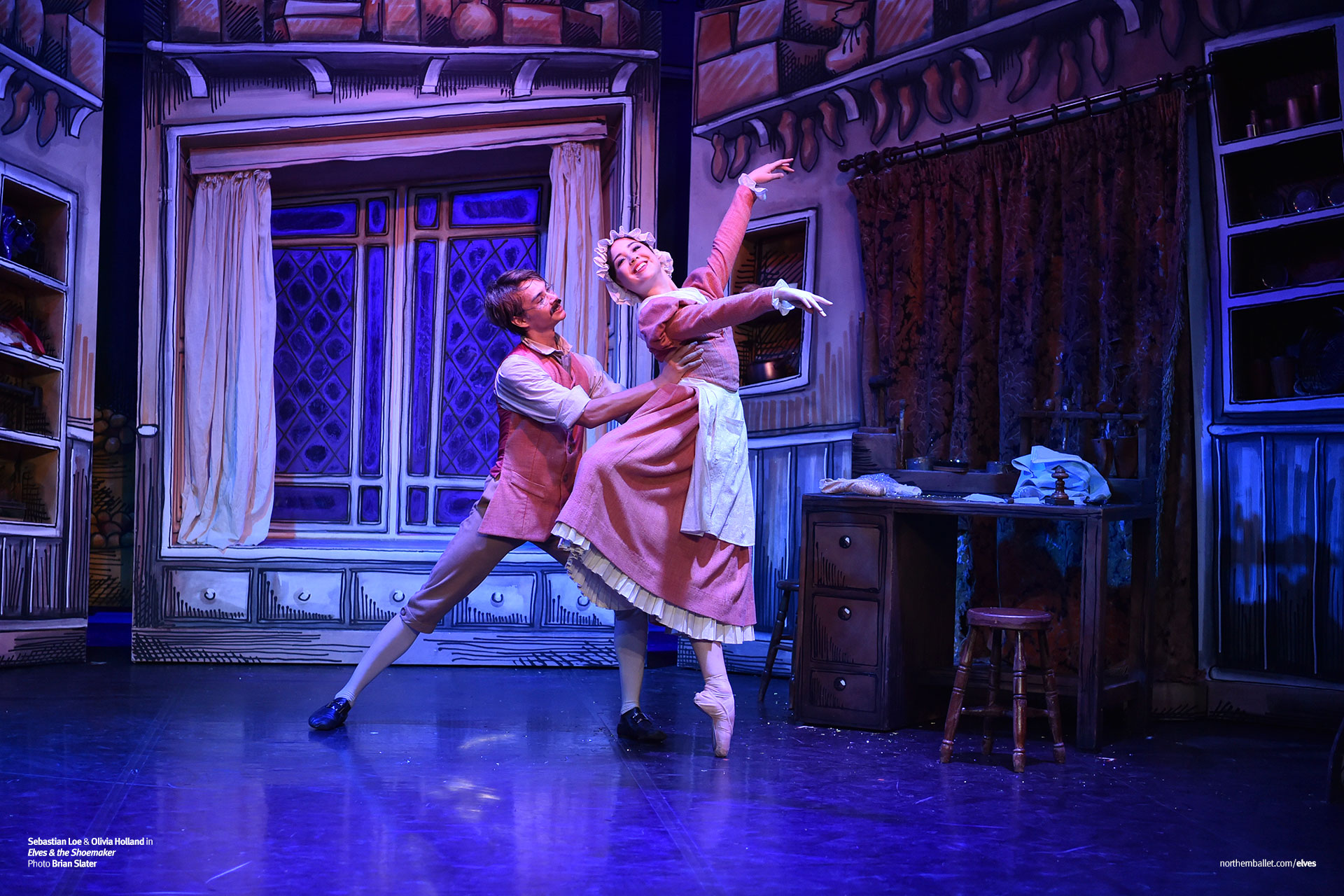 A CBeebies adaptation of Elves and the Shoemaker was recently aired on television, featuring nine children from St. Anthony’s Primary School in Leeds who were involved in the creation of the ballet. They attended rehearsals at Northern Ballet’s headquarters, offering their feedback to choreographer (and Northern Ballet’s ballet master) Daniel de Andrade. The finished ballet – which is set to an original score by composer Philip Feeney – was then recorded at West Yorkshire Playhouse in Leeds.

The television adaptations of the Short Ballets for Small People productions are hosted by children’s favourite Mr Bloom (presenter Ben Faulks). He is joined by a group of youngsters (“the Tiddlers”). They watch the dancers, provide some commentary and, on occasion, interact with the story.

Elves and the Shoemaker is a departure from the animal-tastic productions of the last two years as the cast of characters is entirely human – with the exception of the springy, spirited, supernatural elves. Having enjoyed the clear storytelling and quality dancing evident in Ugly Duckling and Three Little Pigs, I eagerly set aside some time to watch the broadcast of the CBeebies adaptation of Elves and the Shoemaker.

The addition of Mr Bloom and the Tiddlers makes the ballet even more accessible for tiny tots. Their comments and reactions reflect the whispered interactions between youngsters and mums and dads in the audiences of the live performances of Ugly Duckling and Three Little Pigs that I have been part of in the past. Ben Faulks as Mr Bloom keeps the story alive for little ones by reiterating what the dancers are doing and is pleasingly appreciative of the quality of movement that each character possesses. 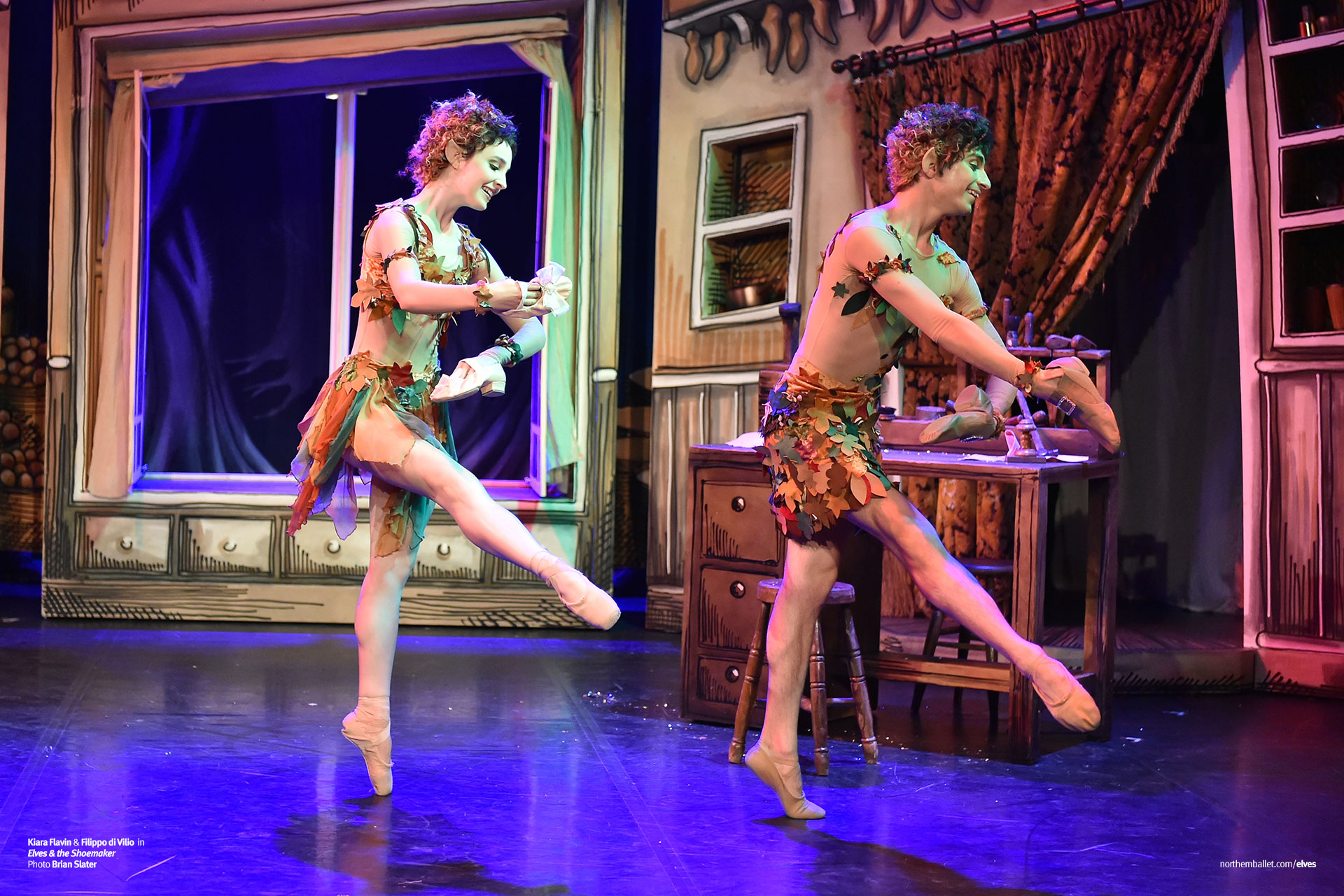 Sebastian Loe as Bertie the shoemaker has a real spring in his step throughout but particularly during his exaggerated shopping walk as he heads to market. His astonishment when he discovers that shoes have magically appeared in the shop is just the right side of silly and is sure to raise giggles from younger viewers. Olivia Holland is gentle and cheerful as Bettina the shoemaker’s wife. She effortlessly enacts easy to follow mime sequences with Sebastian and projects nothing but warmth and kindness.

Clip-clopping clogs, whirling waltzing pumps and shiny satin pointe shoes inspire an array of exuberant dances which are all performed with personality and panache by the cast.

The first caller at the shop is a rich patron called William (dancer Gavin McCaig). His clog dance is full of heel-clicking and toe-tapping as he enthusiastically tries out the shoes with a series of twirling turns and slapstick steps and slides. When he proffers a chinking bag of coins it is quite obvious that he is one very happy customer!

Next we meet Joseph and Frances (dancers Duncan Anderson and Nami Kitagawa), a couple who spy William’s new shoes when he is out and about and are keen to update their own footwear. Their waltzing duet (complete with impressive lifts) slows things down a bit but these two are similarly besotted by their new shoes. 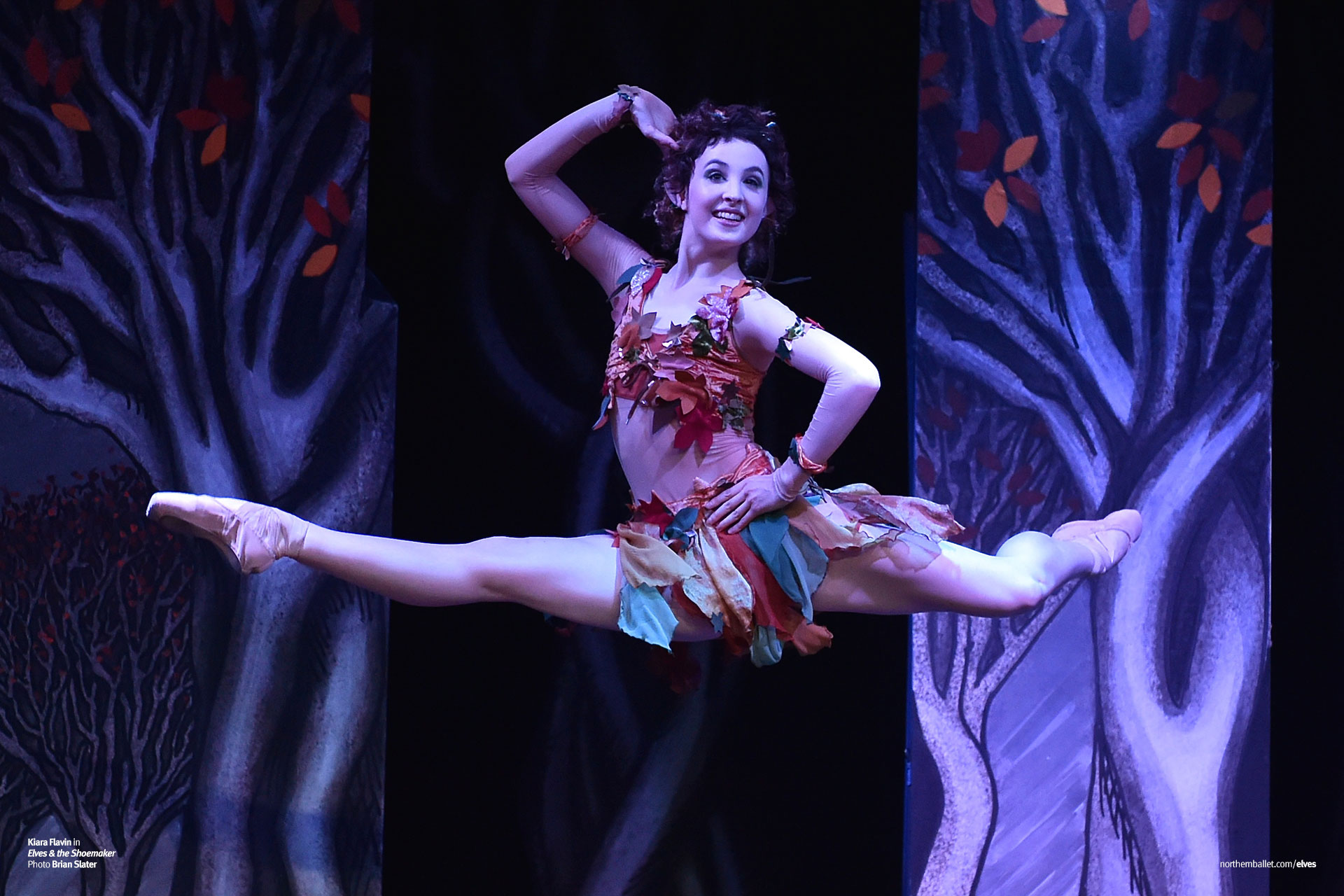 Of course, we must not forget the elves themselves. Filippo Di Vilio and Kiara Flavin are bewitching as the impish Tap and Stitch. The elves are depicted as lithe, elusive figures, sporting pointed ears and costumes that use the autumnal leaves of their natural habitat (these delicate creatures live in the nearby woods). Their choreography is peppered with nimble footwork, sparkling jumps and hovering leaps. Watch out for the trampolining sequence too — the dancers are buoyant but when they start springing and tumbling on the trampolines they really reach new heights!

Elves and the Shoemaker is a simple story with an important moral message to help others, to always share and to be grateful for what you have. Northern Ballet’s inimitable storytelling ability and fun approach to choreography makes for an entertaining and heart-warming ballet production, which is suitable for all ages.

Northern Ballet’s Elves and the Shoemaker will have covered 3,600 miles and visited 32 venues by the end of its tour in November 2015. Visit the Northern Ballet website to find your nearest theatre and book tickets.