There is nothing quite like a musical for perking you up and The Sound of Music is the drop of golden sunshine currently inspiring optimism in audience members at Milton Keynes Theatre.

The tuneful tale of the von Trapp family and the exuberant novice nun who simply cannot suppress her urge to sing became one of the world’s favourite things when Julie Andrews immortalised the iconic role of Maria in the melodic 1965 movie. Fifty years on and The Sound of Music continues to climb mountains – breaking records in ticket sales, album sales, length of runs and audience attendance.

Songbird Danielle Hope is the present touring production’s leading lady whose “heart wants to sing every song that it hears”. Her crystal-clear vocals and onstage warmth saw her deliver a pitch-perfect opening night performance, bringing the auditorium alive with all the irresistible songs from the unforgettable score. 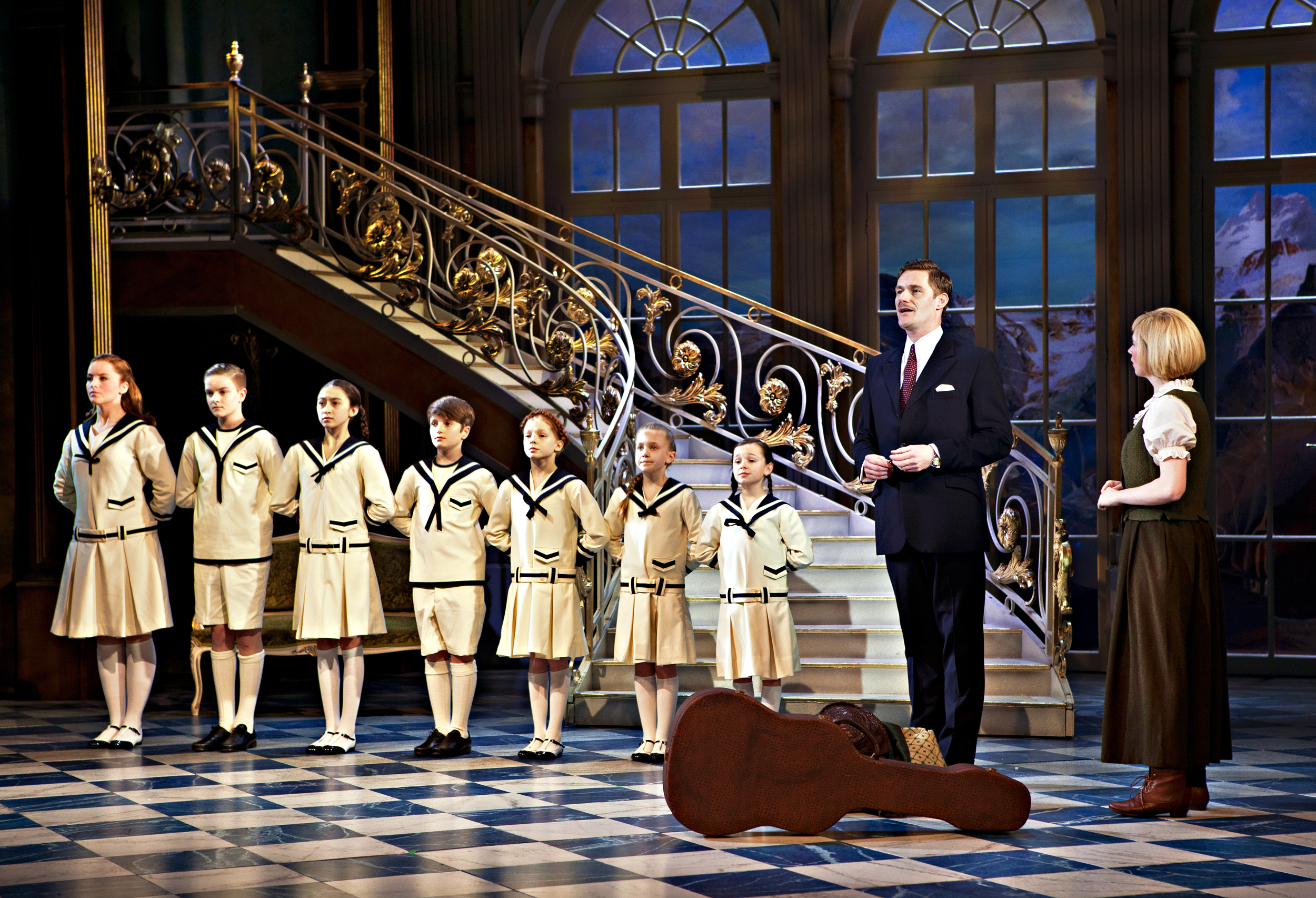 The uplifting story takes place in and around Salzburg, Austria, in the closing years of the 1930s. After proving herself to be a problematic – albeit genuinely lovely – newcomer to Nonnberg Abbey, high-spirited Maria is instructed by Mother Abbess to take a leave of absence from the convent. Once she has whipped off her wimple, Maria is sent to act as governess to the children of Captain von Trapp, a widowed naval officer.

This turn of events ensures that none of their lives will ever be the same again. Maria’s infectious enthusiasm helps re-introduce the seven youngsters and their disciplinarian father to music, joy and affection. Her harmonious addition then plays an instrumental role in helping the family flee Austria during the Third Reich takeover – by escaping across the mountains.

Prior to landing the peak part of Maria, Danielle Hope endeared herself to the nation as a contestant on the BBC’s 2010 television talent series Over the Rainbow. She made her professional debut, in early 2011, as Dorothy in The Wizard of Oz at the London Palladium having competed against over 9,000 girls who auditioned for the programme, all chasing the chance to click together the heels of those ruby red slippers. A stint starring as Éponine in the West End production of Les Misérables, before being cast as The Narrator in the UK tour of Joseph and the Amazing Technicolour Dreamcoat, ensured her ascent into the dazzling heights of musical theatre continued. 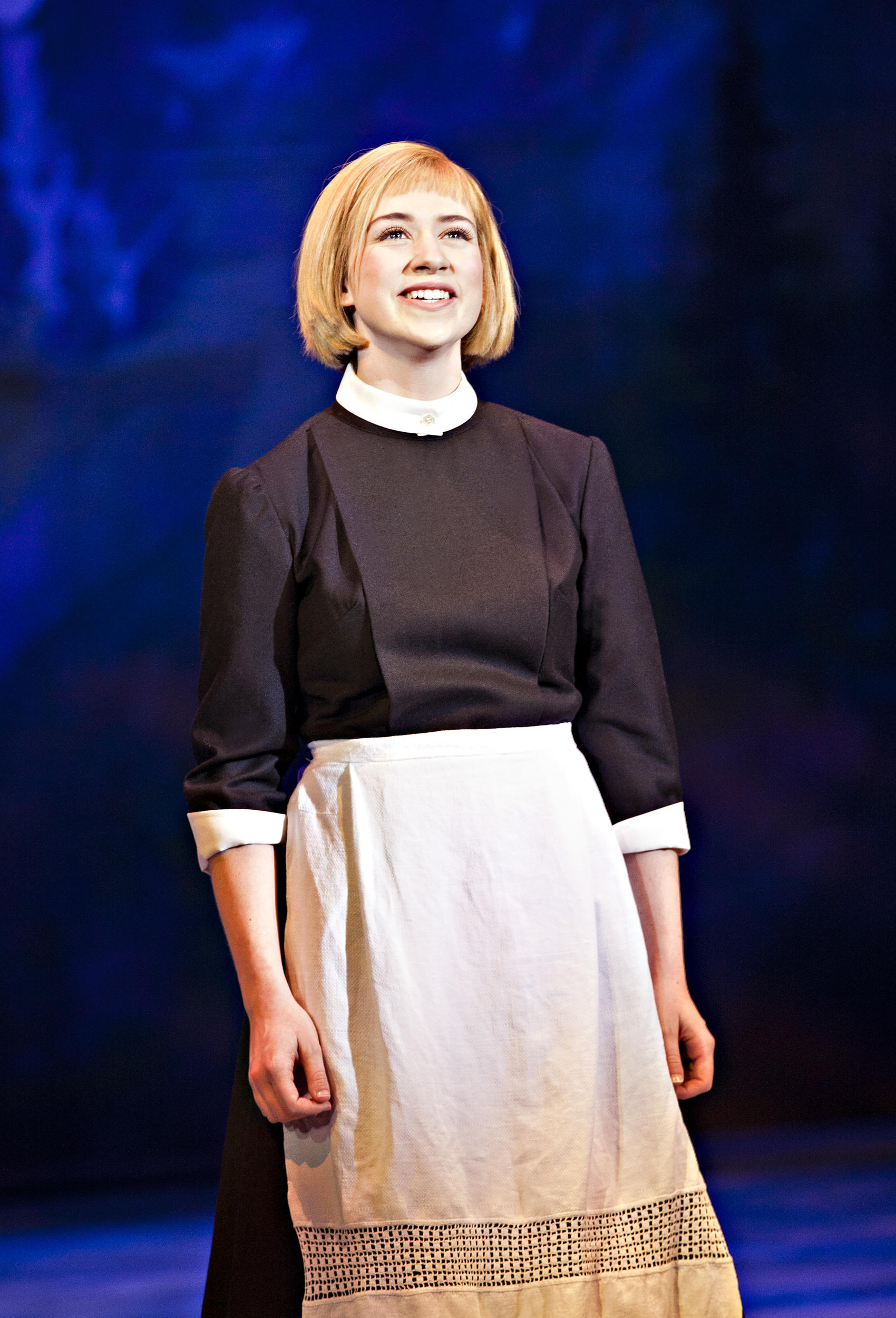 Although you might need a few minutes to get used to the raven-haired starlet in the character’s blonde wig, Danielle’s portrayal of Maria is instantly and effortlessly engaging. She draws the audience in with well-enunciated speech and a sparkling singing voice, offset by a bright smile and comic timing that reveals Maria’s insouciant innocence. Wide grins animated faces in the audience when she implored Mother Abbess to grant her permission to sing. Later, chuckles resonated during the moment when Maria breaks off mid-note to assure a passing Sister that she does, in fact, most certainly have the necessary permission to sing.

Equally easy to love are the fresh-faced warbling youngsters who form the troupe of von Trapp offspring. Oldest of the brood is Liesl, who is sixteen (“going on seventeen”). Resolute in her belief that she does not need a governess, Liesl is just discovering boys, romance and rebellion. With a father whose idea of good parenting is to fit a familial marching routine into every day of the week, she soon realises Maria is the ideal ally to inject a little spontaneity – and a lot of happiness – into their home.

Grace Chapman is delightful as Liesl, retaining just enough childishness to convince us that she is a girl on the precipice of adulthood. She provides some of the show’s limited full-on dance content with Luke George (who plays seventeen-year-old telegram delivery boy Rolf Gruber). Their gawky routine perfectly captured the ungainly quality of two teenagers testing the waters of a relationship. When the scene took on a more dream-like air there were some pleasingly elegant moments too. 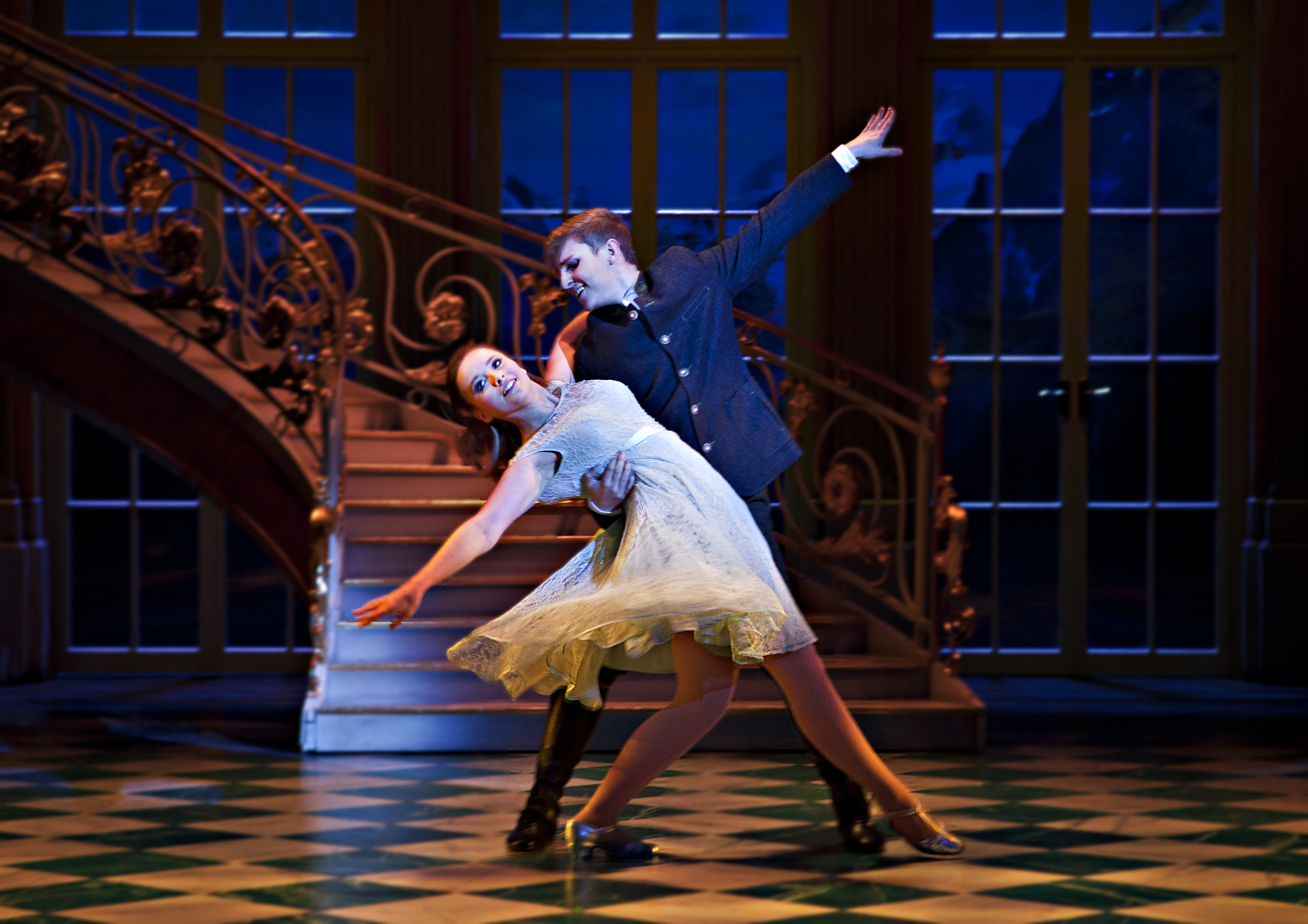 The emphasis on the von Trapp children – Liesl and her siblings Friedrich, Louisa, Kurt, Brigitta, Marta, and sweet little Gretl – makes The Sound of Music perfect entertainment for the whole family as younger theatre-goers will be able to identify with the antics of the boys and girls onstage. The show’s three teams of juvenile performers are living the life that many stage school students aspire to and the youngsters performing on opening night were exemplary. Witty retorts, well-articulated observations, energetic outbursts of singing and the very highest of high notes were all delivered with aplomb by the fledgling cast members.

Initially unconvinced by Steven Houghton’s Captain von Trapp, I warmed to his portrayal in Act Two. Perhaps he was overshadowed by the perfection of the children throughout the first act but his interpretation of the character’s long-awaited union with Maria and wistful rendition of ‘Edelweiss’ dispelled any previous misgivings.

There can be no doubt at all that Jan Hartley blew everyone away with her powerful operatic voice as plain-speaking and perceptive Mother Abbess. Her performance of the soaring ‘Climb Ev’ry Mountain’ was awesome, closing the first act on the most incredible high. 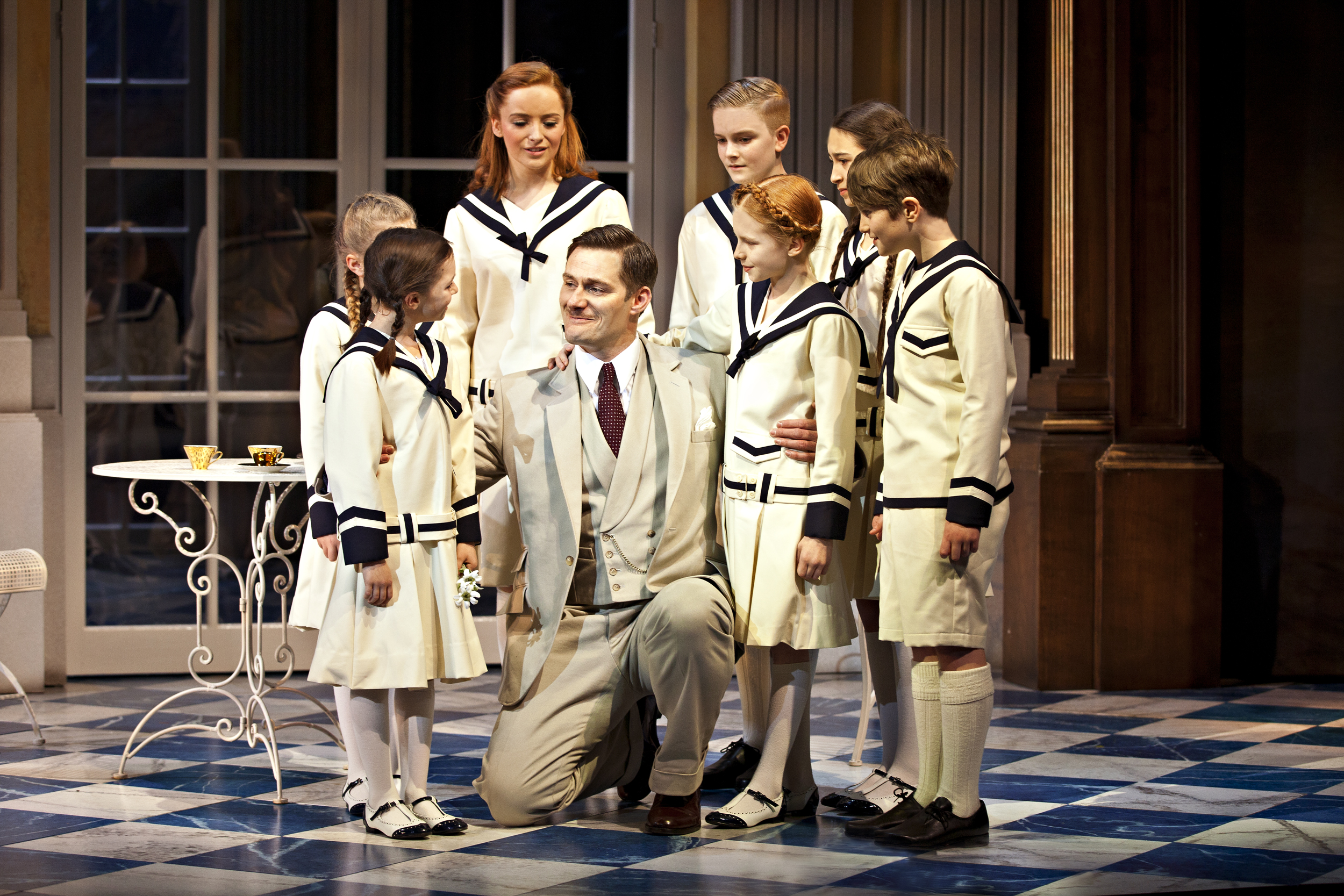 The show features all the well-loved and well-known songs from the film. ‘The Sound of Music’, ‘Maria’, ‘My Favourite Things’, ‘Do-Re-Mi’, ‘Sixteen Going On Seventeen’, ‘The Lonely Goatherd’, ‘So Long, Farewell’ and the aforementioned ‘Edelweiss’ and ‘Climb Ev’ry Mountain’ – as well as a couple of brand new tunes.

This version of The Sound of Music is a magnificent, must-see musical. The cast received a well-deserved standing ovation on opening night at Milton Keynes Theatre. With a fortnight’s run of performances set to bring the venue alive with feel-good songs, I’m sure there will be plenty more standing ovations to come.

The Sound of Music continues at Milton Keynes Theatre until Saturday 6 June 2015.