A cast of talented young revolutionaries stormed their way through the epic songs and struggles of Les Misérables at Stantonbury Theatre on Friday evening.

In a bid to demonstrate “what little people can do”, Rare Productions invited city students aged 8 to 21 to join their crusade to bring the timeless tale of broken dreams, unrequited love, passion, sacrifice and redemption to the stage in a special School Edition.

The end result was an emotive, entertaining and engaging adaptation of the legendary musical. 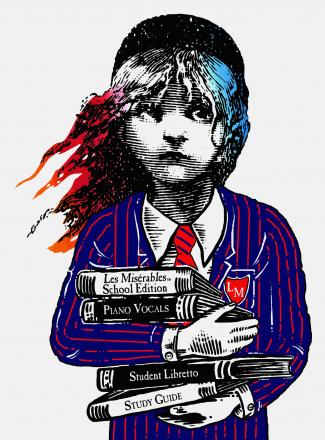 The hard-working and enthusiastic ensemble seamlessly created the various groups of nineteenth century French folk that ex-con Jean Valjean encounters on his harrowing journey in an unjust world. As convicts they shuffled around, shackled to each other, shoulders slumped forward. This made for a stark contrast to the commanding, upright posture of the guards. As hissing and fighting factory workers, they whole-heartedly embodied the hand-to-mouth existence of the poor. As bedraggled prostitutes; spirited students; inebriated inn drinkers and other disparate characters the ensemble took every dramatic moment in their stride, displaying the vigour and versatility that Les Mis demands.

It was a pleasure to hear these people sing! The whole Company pulled together to belt out the rousing group numbers and there were some stunning solos from the many main players too. Les Misérables is known and loved for its pounding anthems and stirring, reflective lyrics so it was a real treat for the (very appreciative) audience that each and every song from the unforgettable score was well performed.

Josh Hawkins’ portrayal of Jean Valjean’s fight for salvation was passionate and pitch-perfect. Relentlessly pursued by the police inspector Javert, Jean Valjean is a complicated character who is constantly evolving. Introduced to us as a jaded criminal, he becomes an industrialist; a hero; a father; a soldier. Unlike other characters who age during the course of the narrative, Jean Valjean is played by the same actor throughout. Fittingly, Josh’s powerful performance matured accordingly – and convincingly.

Bethany Barnes was a terrifically tragic Fantine. Her haunting rendition of ‘I Dreamed A Dream’ was beautiful. Every note communicated the sorrow, despair and humiliation Fantine experiences as a troubled, down-trodden grisette.

All the misery was wonderfully countered by the atrocious antics of Joseph Creaser and Virginia Davies as the corrupt innkeeper Thénardier and his wife, Madame Thénardier. Superb comic timing and synchronicity (and a strong set of lungs each) ensured this pair were despicably delightful as the malevolent and provocative chancers.

There were a few sound issues and I felt that the spacing could have been more aware of the height differences between the cast members as, on occasion, the very smallest ensemble performers seemed to be totally hidden from view. Nonetheless, the staging was generally efficient and effective. The cast paced themselves well and coped admirably with the operetta style of the half-sung, half-spoken dialogue.

Les Misérables is a musical that provokes passion in audience members. It is packed full of big emotions to go with those big songs. Bravo to Rare Productions and all the young performers who took on such a big challenge. They dreamed a dream and made it happen!

Update 18th May 2019: Read my review of Les Misérables the UK touring production.