Shrek The Musical does a ridiculously good job bringing the weirdly wonderful tale of the swamp-dwelling recluse to life. Taking “ogre” Milton Keynes Theatre for a three-week run, this vibrant show proved itself nothing short of Shrektacular last night.

The show, which is based on the 2001 DreamWorks film, premiered in the West End in 2011 (I reviewed Shrek The Musical at the Theatre Royal Drury Lane in 2012) and spent two years wowing London audiences. Now on the road, under the slick direction of former company member Nigel Harman, the touring production is enchanting theatregoers nationwide. 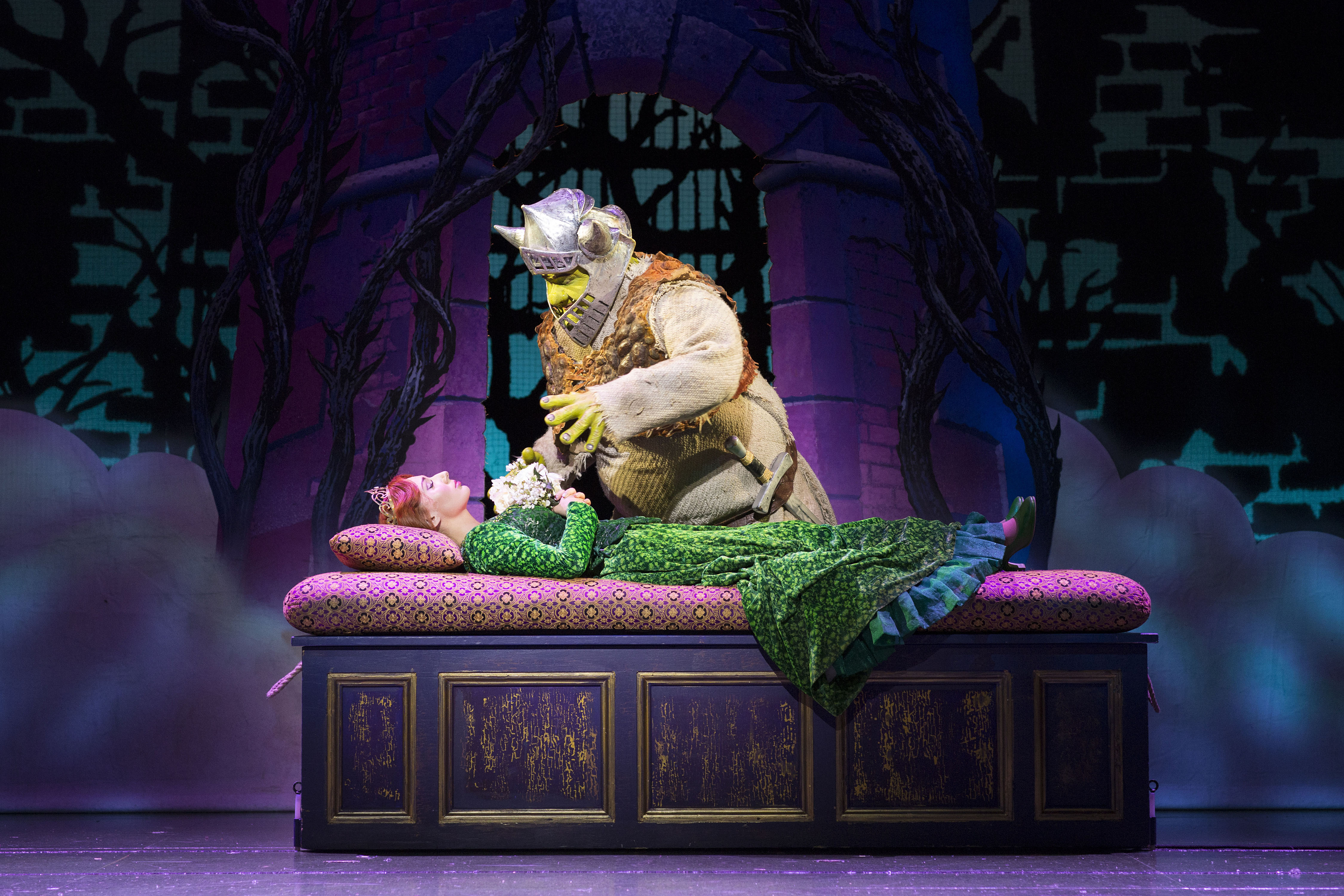 Playing the unlikely hero is Dean Chisnall. He mastered the role during a lengthy West End stint and his Shrek has the gruff charm, dry wit and forlorn expression required to endear him to the whole auditorium.

Shrek may be grumpy and grotesquely green but he has a heart of gold. Chisnall’s humble portrayal, with a Scottish accent and melancholic yet mightily melodious vocals, is spot on. Bumbling out from the wings at the beginning of Act One, he gives a no-nonsense insight into the opening pages of his story and we discover that the childhood of an ogre is no fairy-tale. Separated from their parents at the tender age of seven, ogres must live a lonely life, safely secreted away in solitude to avoid persecution.

Shrek grows up with some semblance of contentment in an isolated swamp. However, one day, his solo existence is interrupted by the boisterous arrival of a menagerie of storybook creatures. Driven by a desire to rid his realm of “freaks”, diminutive dictator Lord Farquaad has banished the likes of The Three Little Pigs, Pinocchio, Red Riding Hood, Ugly Duckling, The Big Bad Wolf, Peter Pan and co from the (brilliantly bizarre) land of Duloc. This incident – and Lord Farquaad’s considerable list of shortcomings as a potential hero himself – is the catalyst behind Shrek’s amazing adventure to rescue a damsel-in-distress named Princess Fiona. 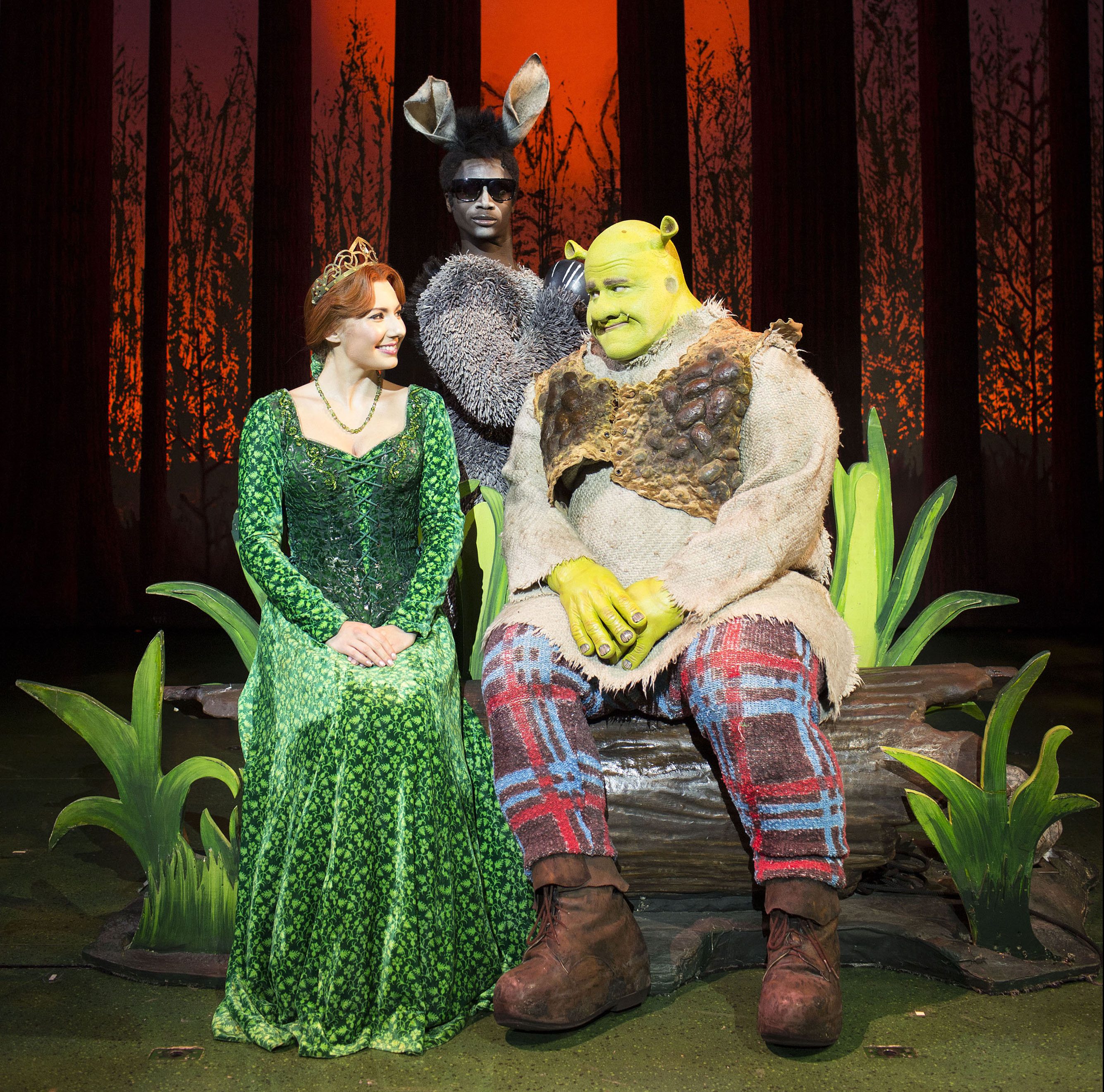 Every knight in shining armour (no matter how unconventional he may be) needs a trusty steed. So cue the talking donkey!

Donkey understudy Ryan Reid confidently cantered on in a last-minute change and had all the songs, shimmies and sass down spectacularly. Costumed in a fuzzy grey bodysuit, accessorised with huge ears, hooves and black shades, Donkey easily captivates audience members young and old. Always ready with an amusing quip, full of boundless energy (he throws some serious shapes on the dancefloor) and touchingly vulnerable at times, it’s no surprise when Donkey becomes Shrek’s first ever pal.

Just as dazzling as the comedic double act of Shrek and Donkey is the heartening, hilarious and halitosis-fuelled chemistry between Shrek and Princess Fiona (Bronté Barbé). This rambunctious royal has strong opinions and her own sad past. Not to mention a rather big, green-hued, ogre-shaped secret!

Seven-year-old Princess Fiona was imprisoned and doomed to passively await a dramatic rescue. The far-away tower she is trapped in is not only surrounded by molten-hot lava, but also guarded by a love-sick, disco-diva of a dragon (expect to be blown away by this beautiful beast).

Waiting for a rescuer who will proffer true love’s kiss is a tiresome business and Fiona whiles away the years by comparing herself to other, famous, fairy-tale princesses in a lovely number performed alongside two younger versions of herself (‘I Know It’s Today’). Bronté Barbé unceasingly excels in the role of the prickly princess, whether singing, dancing or engaging in a less-than-ladylike (but extremely entertaining) farting and belching competition with Shrek (‘I Think I Got You Beat’). 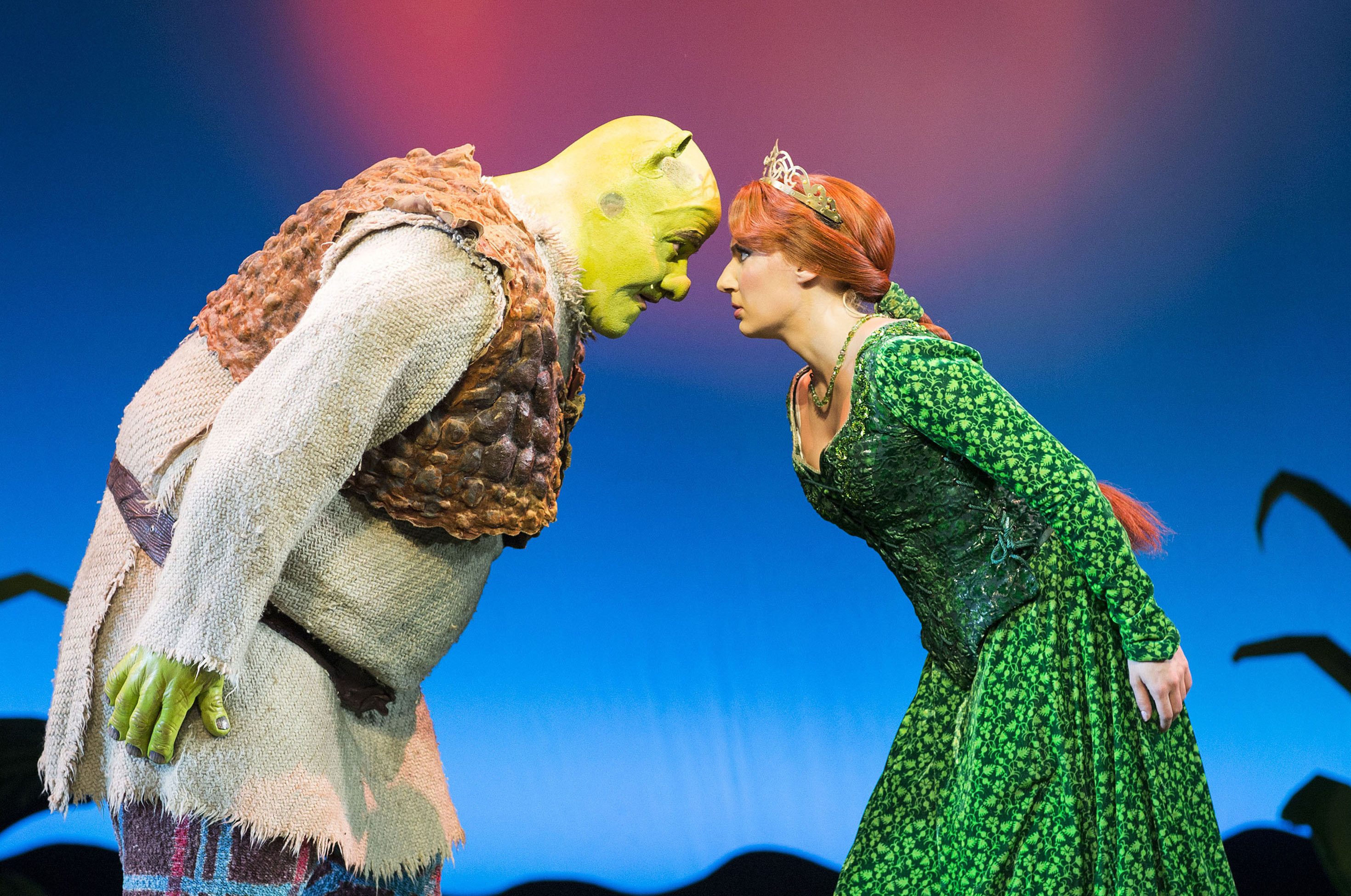 Gerard Carey is absolutely fabulous in the physically demanding part. He hurls insults, coquettishly cavorts around the stage and pulls facial expressions that have everyone in the audience in stitches. The running gag regarding Lord Farquaad’s (lack of) height – and the method of achieving this contracted stature onstage – never gets old. The character’s backstory is a hoot too. 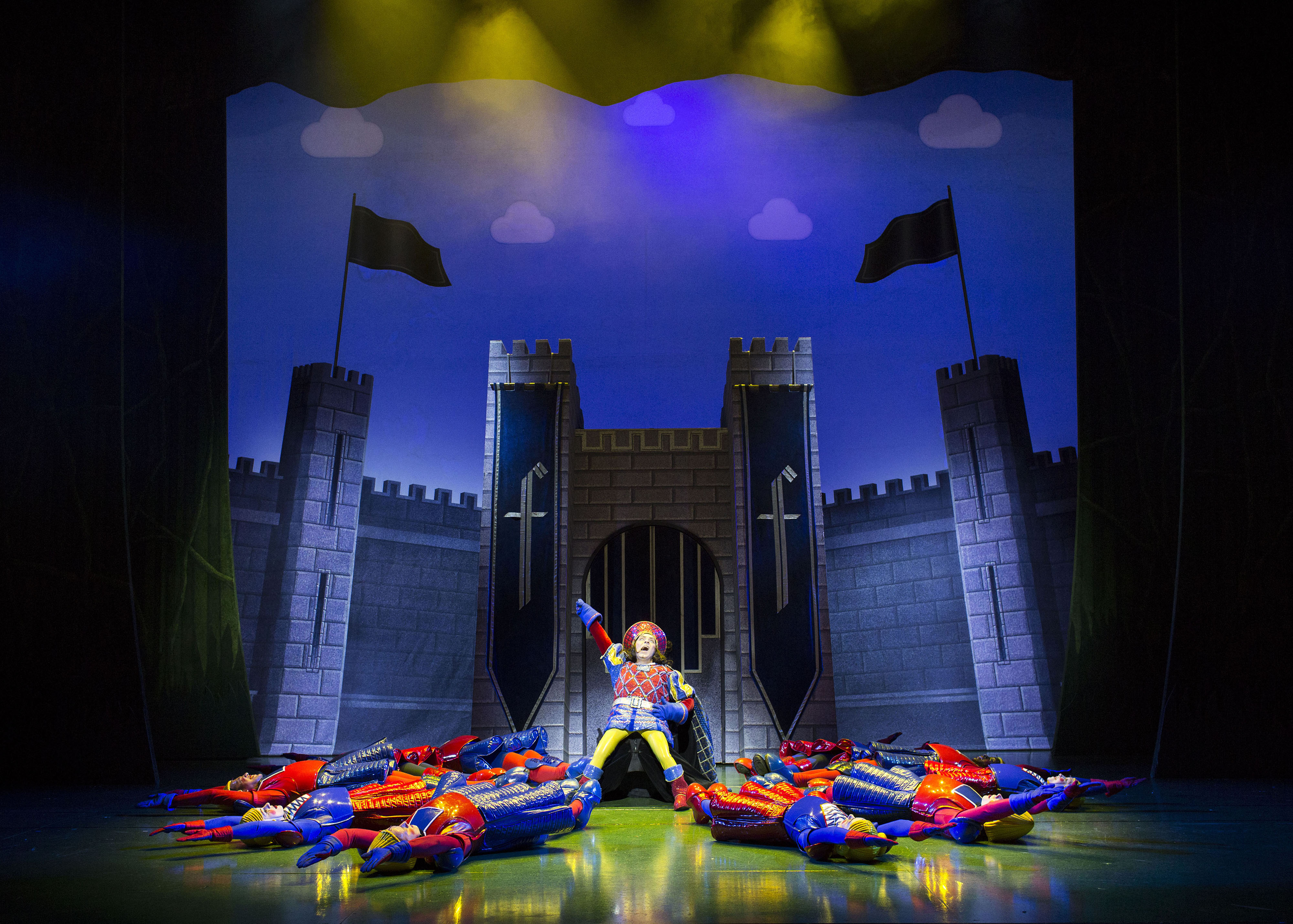 The whole show is an explosion of colour and fun. The sets and costumes are vivid, fanciful and off-the-wall. The quirky, storybook surroundings and whimsical characters come to life accompanied by a live orchestra – always a welcome touch.

There are a plenty of songs (eighteen, in fact) but these are probably not catchy enough to have you waking up the next morning warbling them. Nonetheless, all of the singing is sensational. Perhaps the microphones could have been turned up just a fraction so that every witty word of the light-hearted lyrics could be crystal clear but, otherwise, the vocals all night were an auditory delight.

Movement is employed to wonderful effect in the choreography. From silly slow-motion entrances to vigorous routines featuring frolicking fairy-tale characters; gyrating guardsmen; prancing puppets and even a troupe of tap-dancing rats, everybody boogies their way through this show.

Really, for an all-singing, all-dancing, family-friendly production, you need look no further than Shrek The Musical. Once upon a time, families may have been restricted to an annual visit to the theatre to see a pantomime but Shrek demonstrates how the theatre can be a place for everyone, all year round. 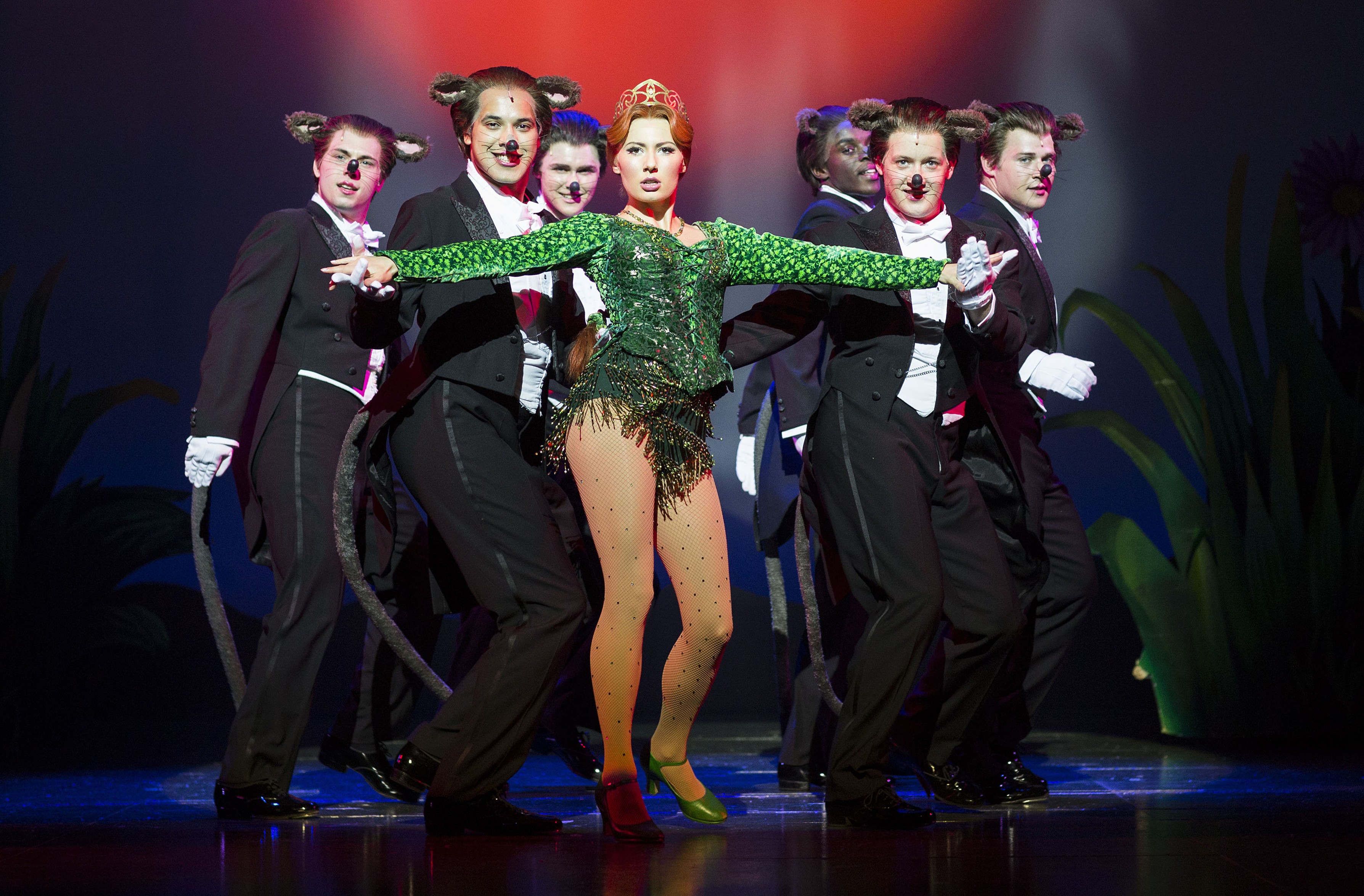