Commissioned to commemorate the centenary of the First World War, this mixed programme of profoundly powerful pieces of contemporary choreography astounded fans and critics alike when it premiered in London at the Barbican in 2014 and during its recent revival at Sadler’s Wells. A huge departure from the traditional classics that theatregoers associate with English National Ballet, Lest We Forget marks artistic director Tamara Rojo‘s boldest move so far. 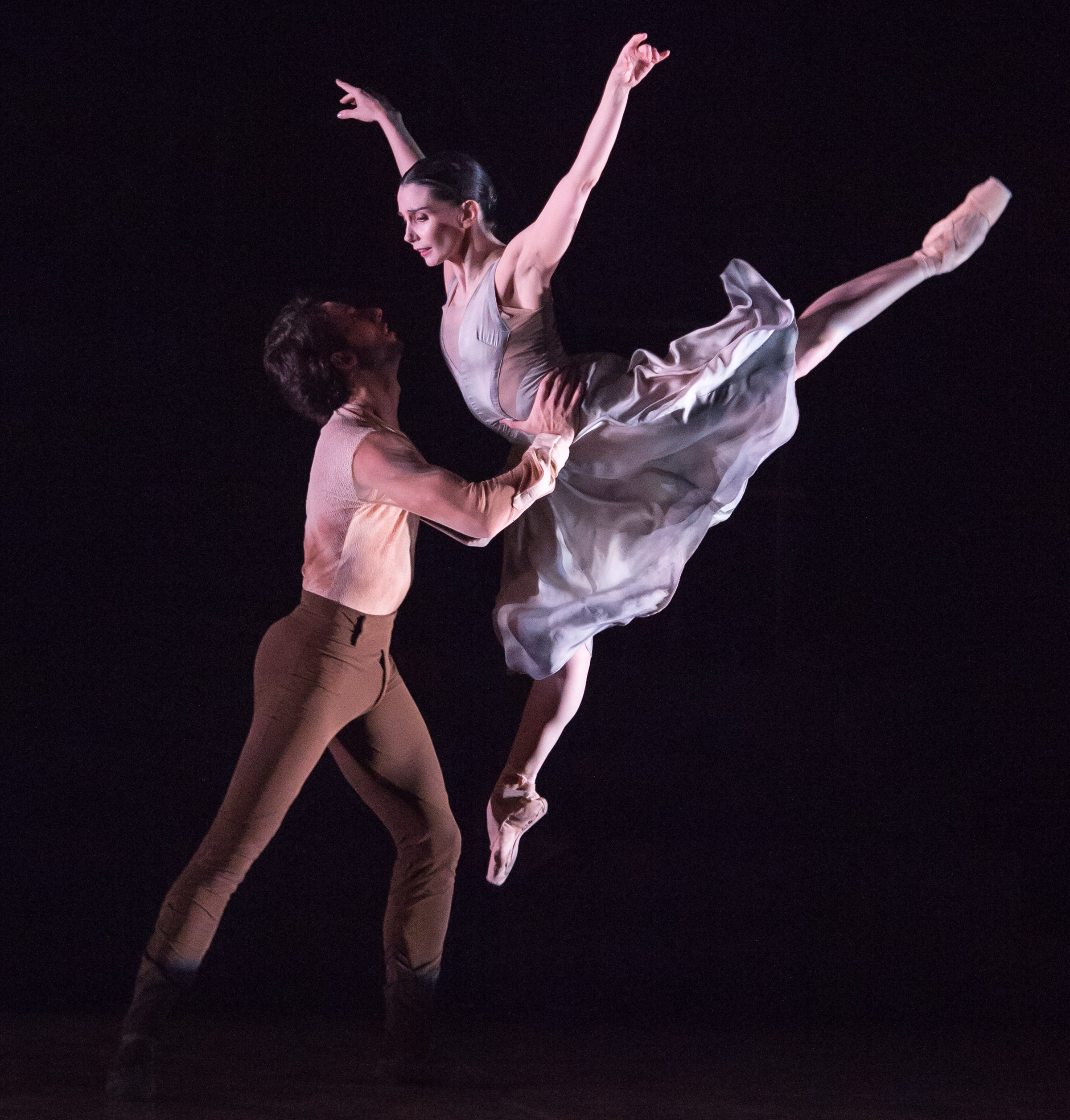 Liam Scarlett’s No Man’s Land features a movement vocabulary that is closest to the language of classical ballet with which English National Ballet’s dancers are most familiar. Scarlett works mainly with The Royal Ballet and was hailed as a dance-maker of the future soon after graduating from his training as a professional dancer. His piece is set to sombre piano music and explores the separation of couples during the war. Reluctant and heartfelt goodbyes are depicted before young soldiers trudge off into the unknown, leaving wives and girlfriends yearning for their safe return.

Spectacular, soaring, swooping lifts provide stunning highlights which see girls in billowing grey-blue skirts swept off their pointe-shoe clad feet. Classical partnering is pushed to its absolute limit and there are moments of breathtaking emotion as the feelings of absence and loss escalate. Momentum builds for an exhilarating and inspiring display of dance, yet every movement is tinged with sadness. Notable too are the simple gestures used to portray all manner of actions and sentiments – from shrugging on a soldier’s backpack to falling into a lover’s embrace.

No Man’s Land is a dance for seven couples, with three featured pas de deux couples. Romantic lyricism, loving intimacy and potent passion are layered into these passages. Casting for this one-off performance in Milton Keynes was heaven-sent as Tamara Rojo partnered Junor Souza for the final, haunting duet. 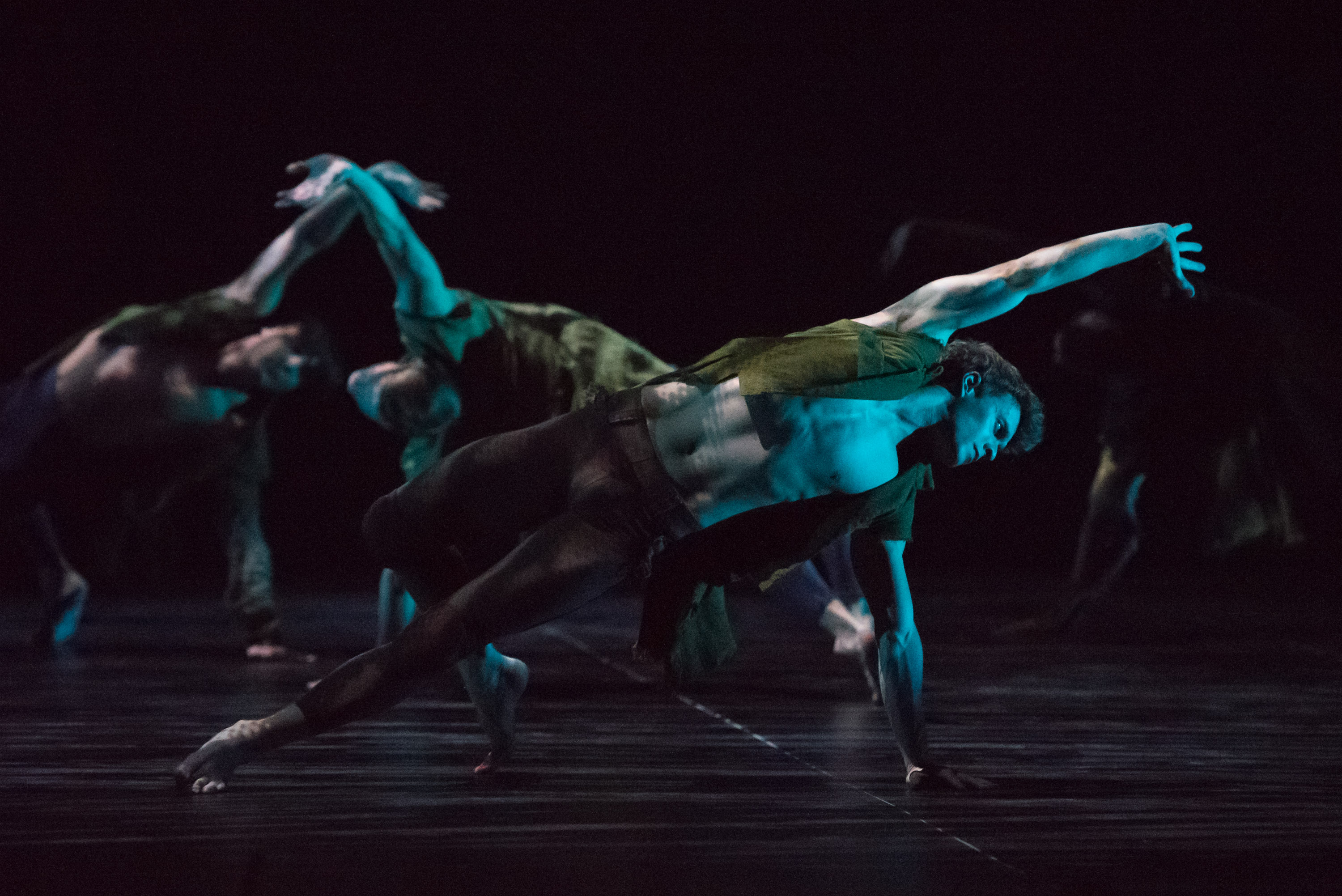 Russell Maliphant’s Second Breath focuses on the men at the front. A renowned contemporary choreographer, Maliphant has adapted his abstract approach to movement creation by taking the emotional landscape of war as a starting point. Twenty bodies (both male and female dancers) dressed in military coats open the piece, standing on a bare, dimly-lit stage, swaying together as one.

As an atmospheric soundscape of audio recordings from the Imperial War Museum Archive and live orchestral rhythms engulfed us, the eerie impact of the large ensemble on-stage reached the furthest corners of the auditorium. I don’t think a single audience member could have remained unmoved by the sinister intensity of Second Breath.

The performance was mesmerising. Hypnotic. The movement itself is immensely physical but Maliphant’s proclivity for free-flowing energy gives his battlefield an undulating, almost dreamlike quality. Individual dancers are submissively held aloft and clamber over each other in despair before very slowly, but surely, plunging to their untimely deaths. There is an inevitability –  a futile feeling – throughout the whole piece that is decidedly affecting. 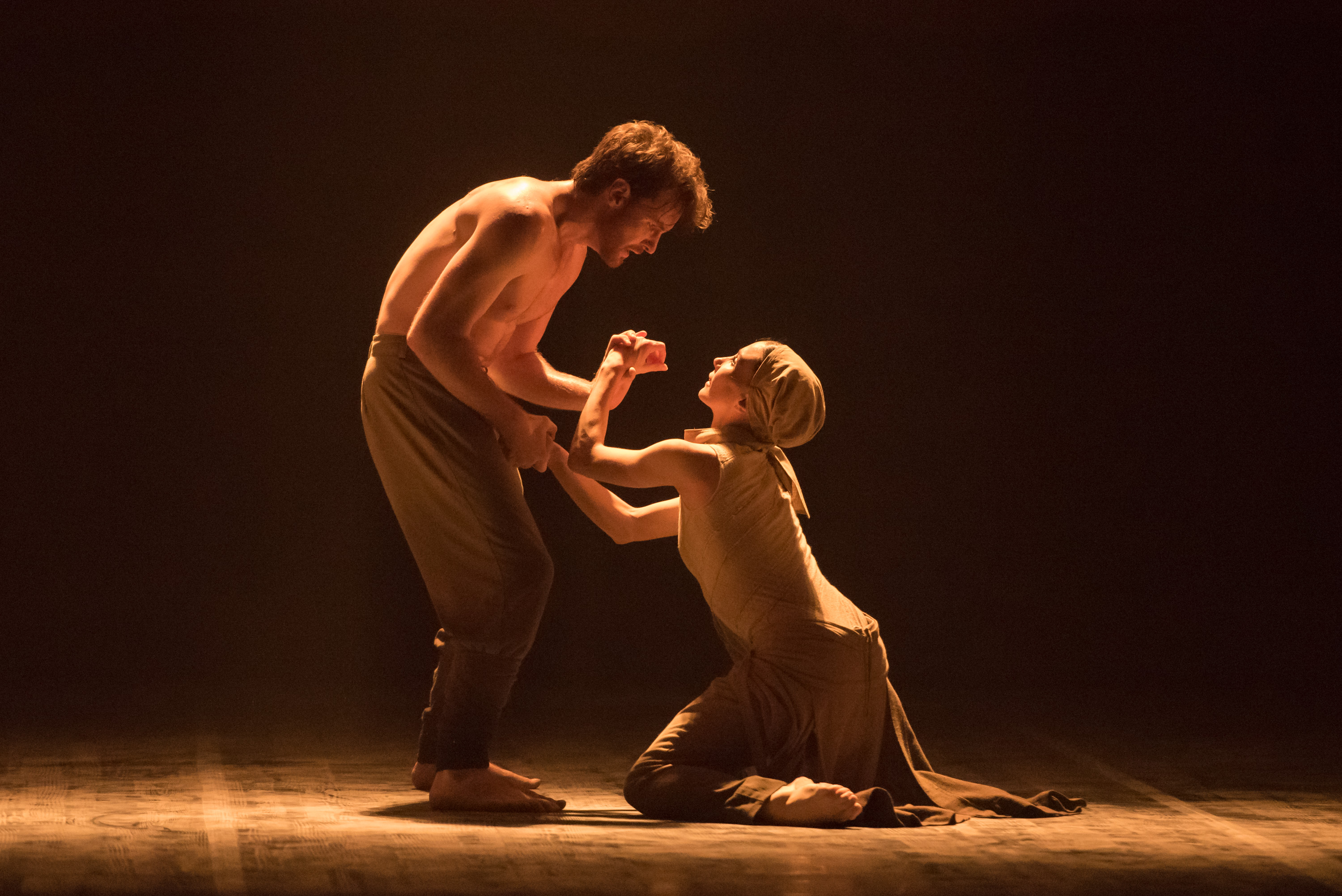 Akram Khan’s background is rooted in classical Indian Kathak training and contemporary dance. His style must have been the most challenging for English National Ballet’s dancers to attune themselves to yet they do so admirably and with complete authenticity in Dust. Watching last night, there was not a single moment when I felt that I was seeing ballet dancers attempting to mimic Khan’s style. Instead, the very essence of the movement executed seems to come from within the dancers themselves. That is true artistry.

This piece got the company up on the Pyramid Stage at Glastonbury last summer (the very first ballet company ever to be invited to perform there) and it is easy to see why Dust proved a popular choice for Glasto organisers AND scooped “Best Modern Choreography” at the 2014 Critics’ Circle National Dance Awards. The piece is packed full of powerful themes which are explored through thrillingly inventive movement, set to pounding music. Dispirited human beings are buoyed up by the strength of communities; bold, warrior-like women assertively claim the space; and a pas de deux explores the transformations that relationships and personalities undergo following devastating change.

Once again, the casting at Milton Keynes Theatre treated us to a performance by the incredible Tamara Rojo. It proved difficult to tear my eyes away from her when she was whirling through Dust alongside the other female dancers and her evocative pas de deux with James Streeter brought spectators to their feet in standing ovation. 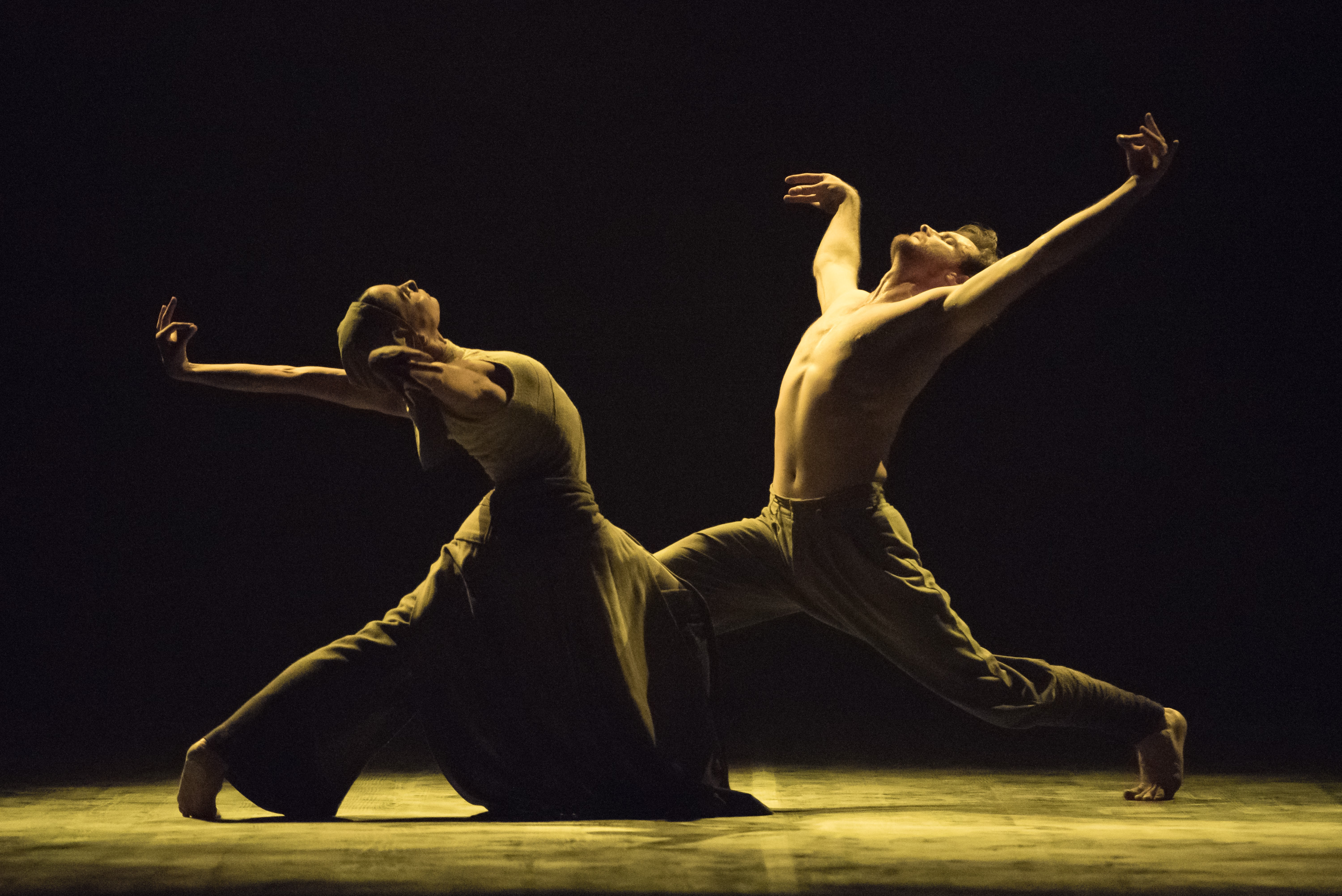 Lest We Forget showcases English National Ballet’s talented dancers in an awesome and absorbing collection of dance-works created by a trio of in-demand choreographers. The programme makes for an evening to remember and serves to remind theatregoers, balletomanes, dance students, dance teachers and industry professionals that we need to embrace change and encourage collaboration to ensure ballet evolves and retains relevance for future generations.

Determined to propel ballet into the twenty-first century, Tamara Rojo is on a mission to recruit the most talented choreographers to collaborate with her dancers. While the spectacular classical ballets will, of course, remain in the repertoire, Rojo’s hope is that through the creation of exciting new works the art-form will secure its longevity. Consequently, her second commission for English National Ballet is the ground-breaking She Said – a triple bill featuring new pieces created by eminent female choreographers Aszure Barton, Annabelle Lopez Ochoa and Yabin Wang.

English National Ballet’s aim has always been to bring world-class ballet to the widest possible audience. The world première of She Said will take place at Sadler’s Wells Theatre in April 2016. On behalf of dance audiences in Milton Keynes, I think I ought to round this review off with a “thank you” to English National Ballet for bringing Lest We Forget to us. And please note that we would love to welcome She Said on tour in the not-too-distant future!

English National Ballet next performs Lest We Forget at Palace Theatre, Manchester on Tuesday 24 November 2015 at 7.30pm.

This review is also published on Total MK.