Even Shakespeare’s cruel twists of fate are powerless to dampen the blazing passion of English National Ballet’s current Romeo and Juliet.

Undeniably the world’s greatest love story, the tragedy is eternally destined to be an audience-pleaser and Milton Keynes Theatre was packed on opening night for the touring revival of Rudolf Nureyev’s 1977 interpretation. Originally created for the company in celebration of the Queen’s Silver Jubilee, this sumptuous production intensifies the tale of two star-crossed lovers by frequently emphasising the notion of human weakness; ominously accentuating the brutality of Renaissance Verona; and boldly challenging the dancers with demanding, multifaceted, choreography.

Contrasts command much clout in any Romeo and Juliet. The opposition of the two rival families. The hustle and bustle of the swarming marketplace juxtaposed against the serenity of the moonlit trysts in the garden and at the chapel. The differences between idealistic Romeo and passive Paris as they vie for Juliet’s attention. Still, what really stands out in this version is how the spectacle of impressive leaps, turns and lifts can be impeccably matched by the potency of far more natural human movement. A glance, a touch, a kiss. Nureyev’s staging manages to develop all of the characters and provide further insight into several relationships, balancing the brilliance and bravado of ballet with a depth of drama befitting of the Bard’s prose.

Juliet’s youthful defiance is portrayed as a resolute rebelliousness, giving lead principal Erina Takahashi lots to work with in her ardent performance as the infatuated adolescent teetering on the brink of womanhood. She grapples convincingly against her father, Lord Capulet, when ordered to marry Paris and personifies overwhelming anguish when Tybalt is killed. Nureyev’s choreography heightens the role of Juliet, offering ample opportunities for the female lead to demonstrate both technical proficiency and emotional expression.

The unnerving indecision a desperate Juliet experiences concerning whether to choose suicide and preserve her family’s honour or drink Friar Lawrence’s potion and abscond with Romeo is compellingly communicated through the addition of a slow, sinister sequence. Here, Juliet’s wavering is embodied through the ghosts of Tybalt and Mercutio. Other revealing extras devised by Nureyev include an uncomfortable, interconnected, dance for four (Lord and Lady Capulet, Juliet and Paris) which tries to conceal the tension surrounding the impending arranged marriage and a short, swirling pas de deux for Juliet with Tybalt. The admiration Juliet has for Tybalt is demonstrated here, along with his protectiveness of her. He is her cousin and she loves him – but she cannot help defying him when she falls for Romeo.

Romeo himself is a romantic dreamer, an optimist. Against the shadowy milieu of a Verona drenched in death and decay, Nureyev’s Romeo verges on whimsical. We get our first sight of Juliet’s hero after a dark prologue shows a funeral procession for plague victims. Bathed in the warm glow of a brightly lit stage, new lead principal Isaac Hernández (he joined English National Ballet this year from Dutch National Ballet) exudes boyish vitality while scooting through a series of elaborate, floor-skimming steps. Throughout the ballet, Hernández makes light work of turns and leaps, proves to be a consummate partner and establishes a very likeable trio with Mercutio (Cesar Corrales) and Benvolio (James Forbat). 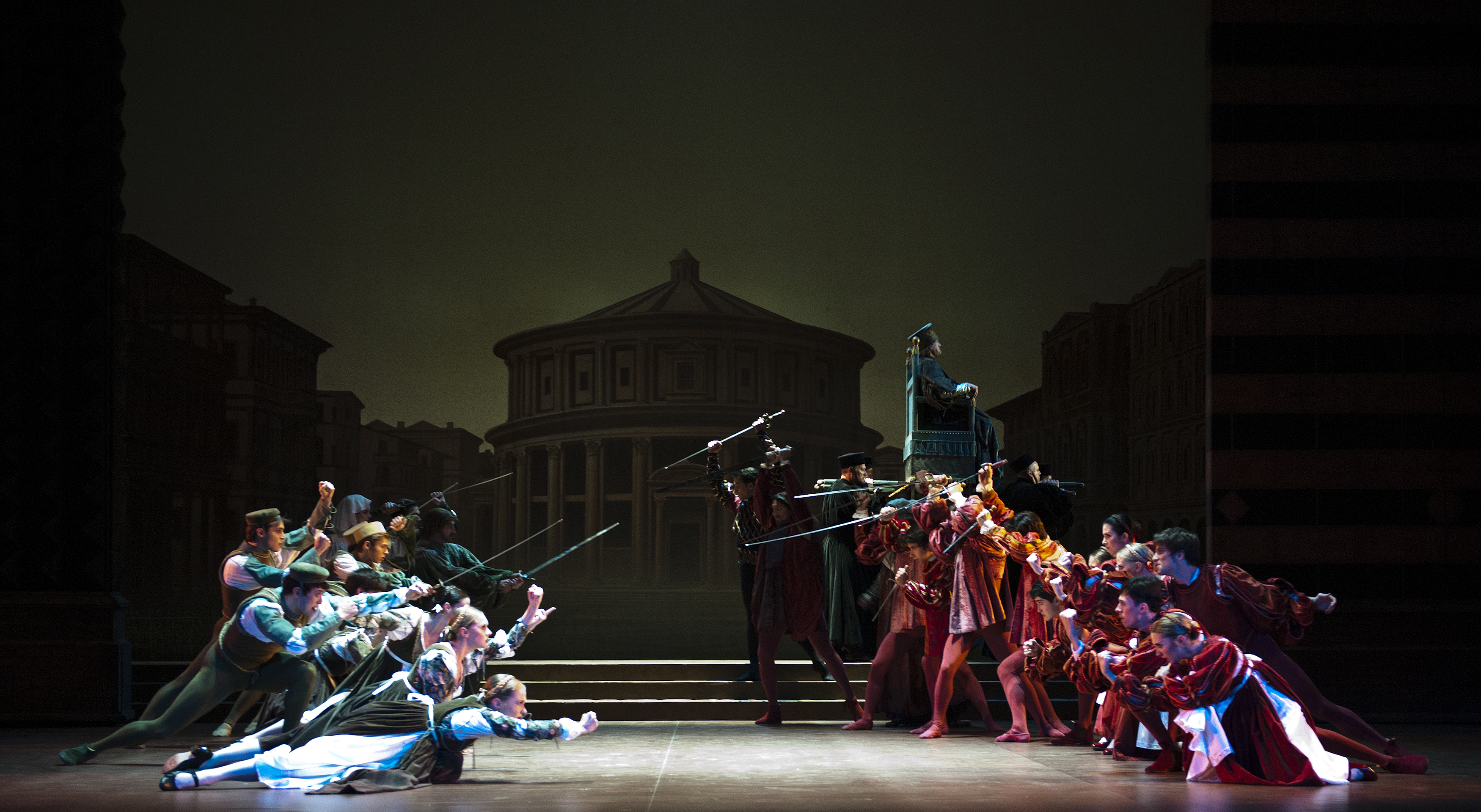 Junior soloist Cesar Corrales is brimming with comic virtuosity in his portrayal of Nureyev’s maverick of a Mercutio. Seemingly slapdash, slapstick moments suddenly morph into taxing elements of ballet proper during Mercutio’s uproarious dance of distraction at the Capulet’s Ball. Corrales undoubtedly carries off the jaunty high jinks, endearing Mercutio to his comrades on-stage and to the audience. Illustrative of his focus on character development, Nureyev orchestrated his version so that when Mercutio is fatally wounded, his friends and the revellers in the market square think that their prized prankster must be joking. High on adrenaline, they hoist him onto his feet and swing his limp body around as he struggles to take his last breaths. This makes it all the more affecting when the realisation dawns on them that he truly is dead, providing enhanced dramatic motivation for Romeo’s avenging attack on Tybalt.

The ensemble episodes are epic. Hernández’s flirtatious Romeo tries to pay court to first artist Madison Keesler‘s radiant Rosaline in a buzzing marketplace. When factions from the House of Montague and the House of Capulet clash, men and women flood the stage in a boisterous brawl. Later, there are forty dancers at the opulent Capulet Ball and a grand total of 60 performers appear throughout the show, engaging in sword fighting, flag-throwing and acrobatics – as well as Nureyev’s idiosyncratic choreography.

This is a lively, action-packed Romeo and Juliet, with drama, comedy and dance aplenty. Prokofiev’s sensational score is performed live by the English National Ballet Philharmonic, providing a stirring acoustic backdrop. The characters are vivid; the intricacies of their relationships are drawn out through the dancing itself and the double-death of the doomed central couple remains as moving as if we hadn’t seen it coming all evening.

Read my review of English National Ballet’s Romeo and Juliet in-the-round at the Royal Albert Hall.