Complete with spectacular singing, enthusiastic dancing, stacks of silliness and more audience participation than ever before, Aladdin proves once again that the theatre is a place for everyone. In panto anything goes, and this show has all sorts of entertaining eccentricities! 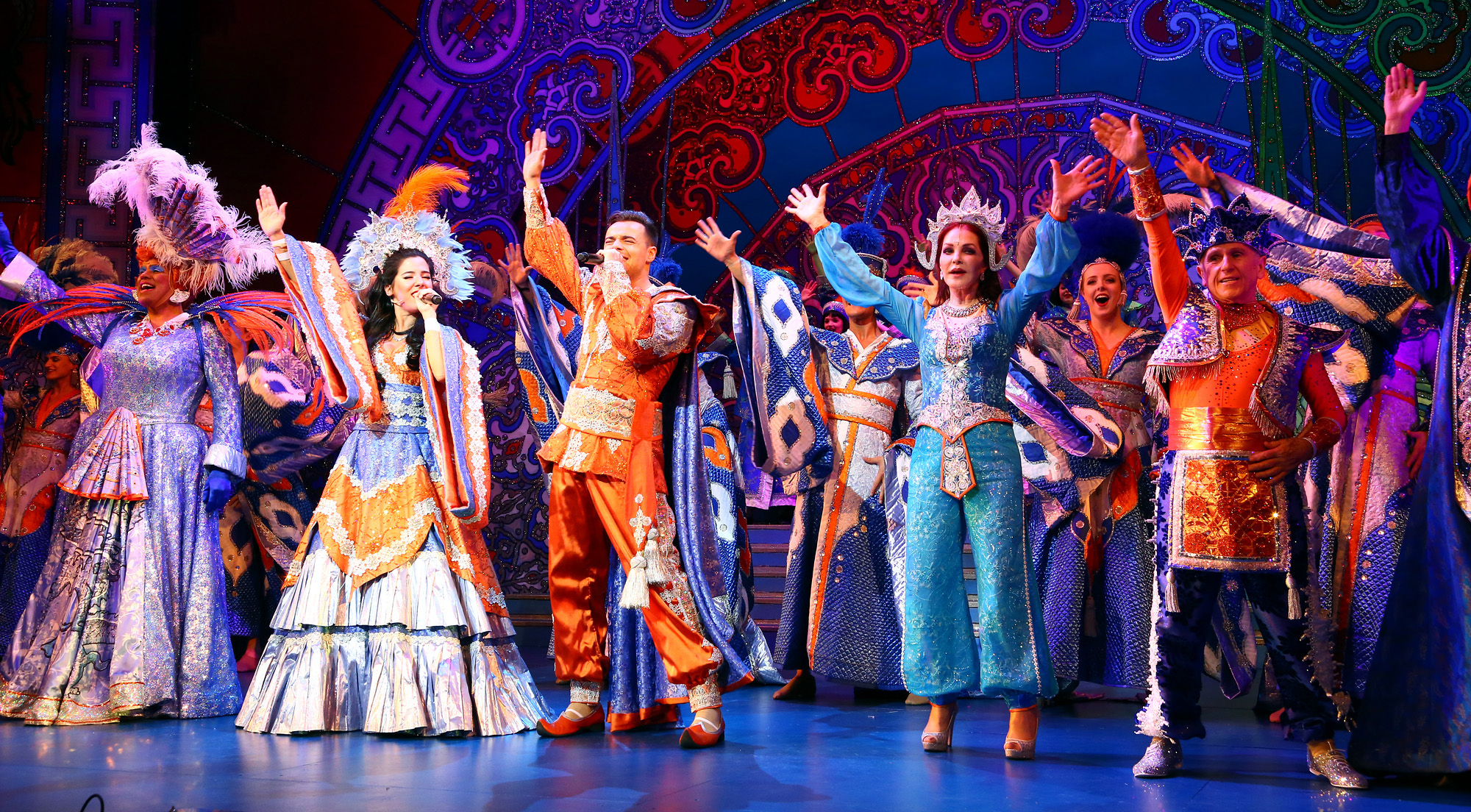 The plot itself doesn’t seem to offer much in terms of narrative drive. Abanazar, a sinful sorcerer, summons the Genie of the Ring to ask how he can get his evil hands on a legendary magic lamp and is informed that a poor Chinese laundry assistant named Aladdin is the only one who can retrieve said object from deep within a cave. So, the sorcerer hunts the laundry lad down and persuades him to undertake the challenge, simultaneously getting caught up in the developing love story between Aladdin and the plucky princess Jasmine.

It’s the musical fantasy we know from the Disney film but put together in a slightly more frenzied, chaotic manner than you’d perhaps expect – even by pantomime’s standards. All of the essential story elements are included (the ring, the lamp, the laundry, the magic carpet, the cave, the happy-ever-after) and there are upbeat musical numbers, location-specific jokes and exuberant games along the way. Still, frustratingly, the show seems to lack that certain something, that “pizazz” perhaps, which I have come to expect from panto each year.

Admittedly, the story simply is the story. Maybe it is just the tale of Aladdin itself that I am not enamoured by. Certainly, the talented cast members themselves have moments of glittering brilliance throughout the production. 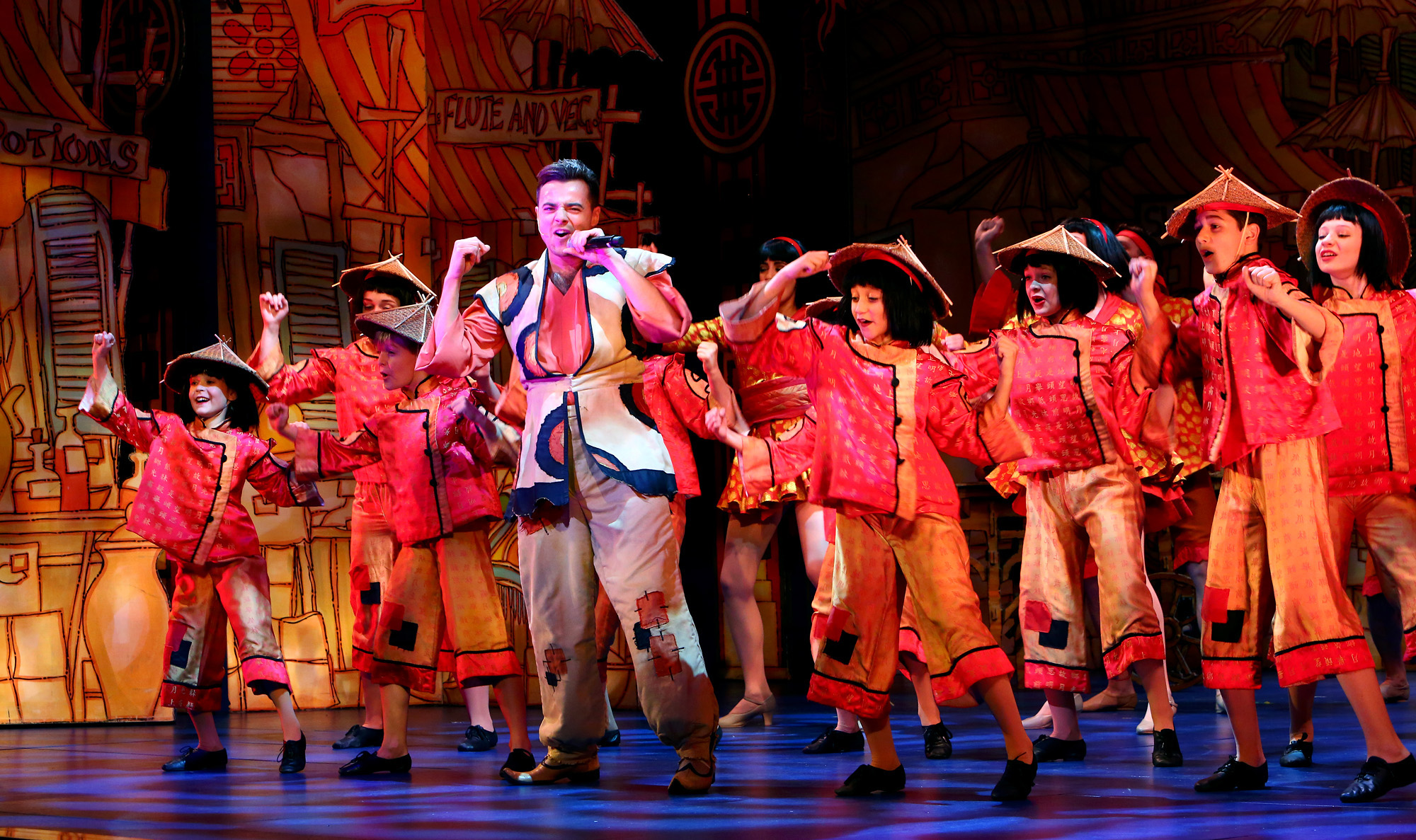 Ben Adams is in fine voice as the title character. He became lead singer of Brit award-winning 90s pop group a1 when he was 16 and he hasn’t stopped singing, writing and performing since. Soaring vocals and an amiable, easy stage presence make him instantly likeable and his rousing rendition of Ed Sheeran’s Thinking Out Loud had the auditorium spellbound on press night.

Kev Orkian is totally in command of his star turn as Wishee Washee. Unlike his stints in panto of previous years (Cinderella, Snow White and the Seven Dwarfs), the internationally acclaimed comedy pianist doesn’t dazzle us with his tickling of the ivories in Aladdin. Nonetheless, he still tickles the funny bone of every single audience member with a plethora of puns, imaginative and insightful insults and other high jinks that are guaranteed to have even the most serious theatre-goer in stitches. In fact, many times on Tuesday evening the cast found themselves laughing at their own comic capers, with Kev often being the force behind the funnies. As well as all the delightfully daft word-play and segments of slapstick humour, a comedy highlight for this dance writer had to be seeing Kev don a tutu and tunefully intone: “If I was not in Old Peking, I’d be a ballet dancer – plié, relevé, do the dying swan”. He does (an approximation of) all the actions too!

The celebrated actual former dancer Wayne Sleep brings bling to proceedings as the sequin-covered Genie of the Ring. His droll, self-deprecating delivery of lines such as “I remember that old Russian ballerina ‘Sick over your carpet’”; “If you need me I’ll be practising at the barre” and “Would you like to see my Sleeping Beauty?” leave us in no doubt as to his “twinkletoes” persona. In the second act he takes centre stage in his dancing shoes and taps his way through Puttin’ On The Ritz, accompanied by both the dance ensemble troupe and the eager junior chorus. 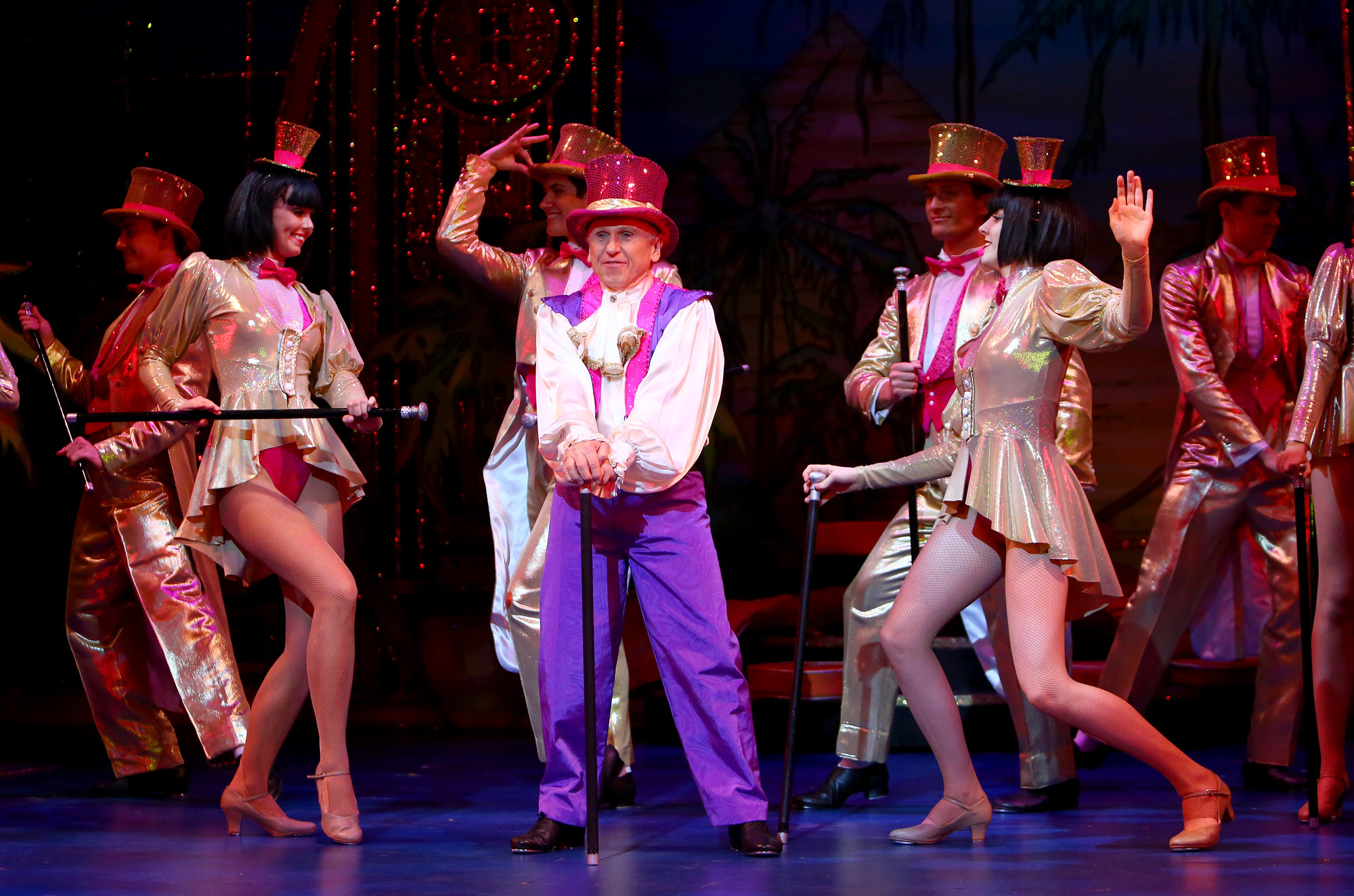 Theatre veteran Gary Wilmot is quite obviously completely at home on the stage. His songs are pitch perfect and he wrings every last drop out of Widow Twankey’s jokes and lascivious womanly ways. This includes getting all in a lather when male undergarments or bare-chested guards are mentioned. He also wears a variety of fancy, fashion-forward, laundry-inspired frocks with flair.

Priscilla Presley sports skyscraper heels and crystal-clear enunciation as the Genie of the Lamp – demonstrating both impressive balance during catwalk-worthy sashaying and a pure speaking and singing voice. Elvis references still follow her around in real-life, and, unsurprisingly, there are song-title quips and Vegas cracks littered throughout the script whenever she is nearby.

The singing is top-notch (songs include Uptown Funk, Thinking Out Loud, Marvin Gaye, Can You Feel It, Could It Be Magic and Car Wash). At times, the music on Tuesday evening was just too loud so hopefully the microphones will be turned up a fraction as the run continues to ensure the vocals have the desired impact. For me, pantomimes need a dynamic and versatile dance team and the dancing throughout is adrenaline-charged and generally well-executed. Unfortunately, some of the choreography does quickly become a tad repetitive. Still, high kicks and back flips are always crowd-pleasers and the overall performance is vibrant and vivacious. 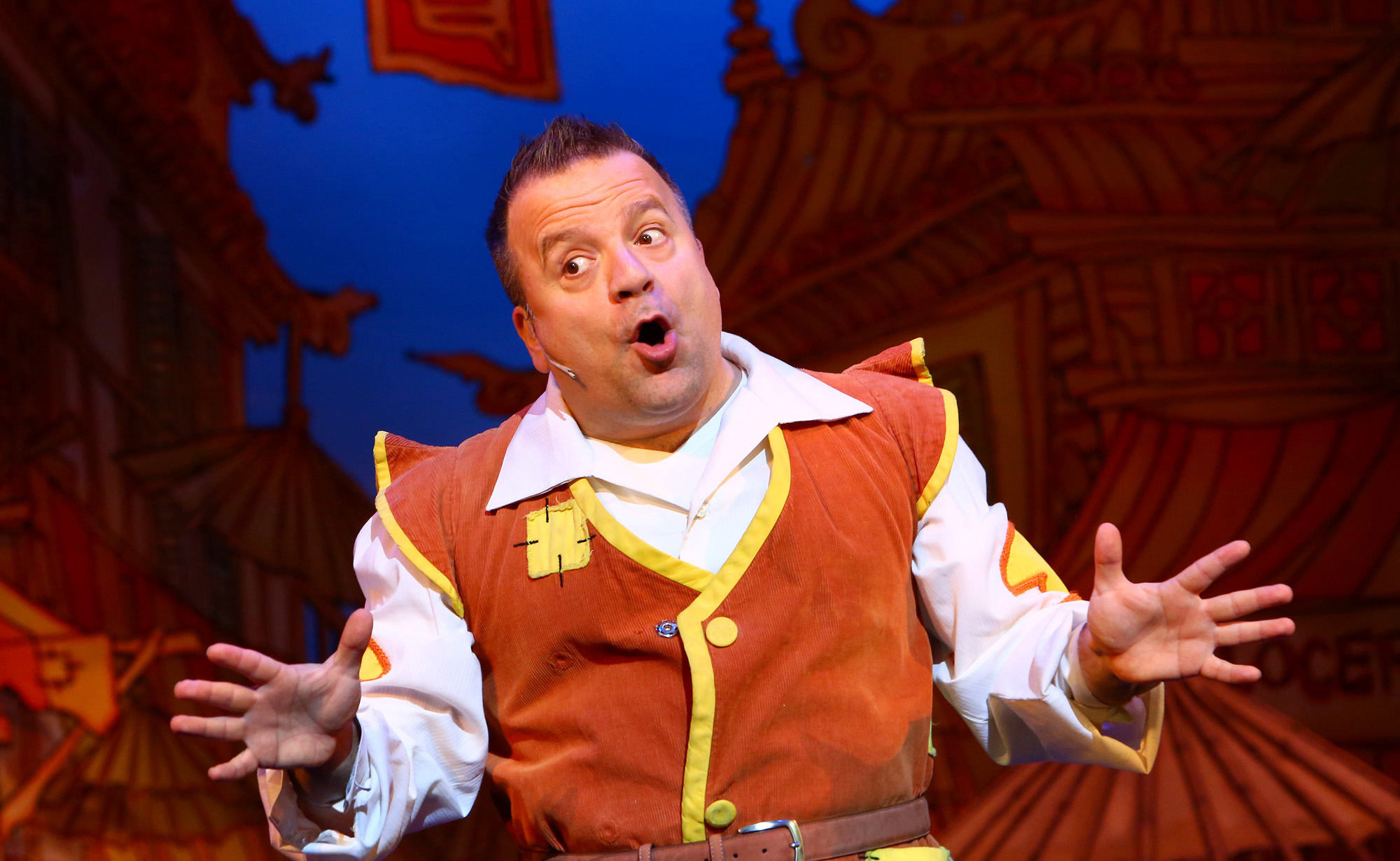 The magic carpet flies in for two impressive appearances and the special effects and sets throughout are magical, as always. Milton Keynes Theatre goes all-out for panto every year so the whole venue is fittingly festive. The entry halls are beautifully bedecked and there are also quirky touches including a huge Aladdin’s lamp suspended from the ceiling above the Box Office. And, of course, spectacle is the name of the game when it comes to the on-stage pyrotechnics and airborne antics.

Pantomime is a much-loved British tradition and I adore the way it entices whole families to visit the theatre together to enjoy a couple of hours of well-staged silliness. If you are lucky enough to get tickets and hoping for an entertaining seasonal treat, Aladdin will undoubtedly make your wish come true! 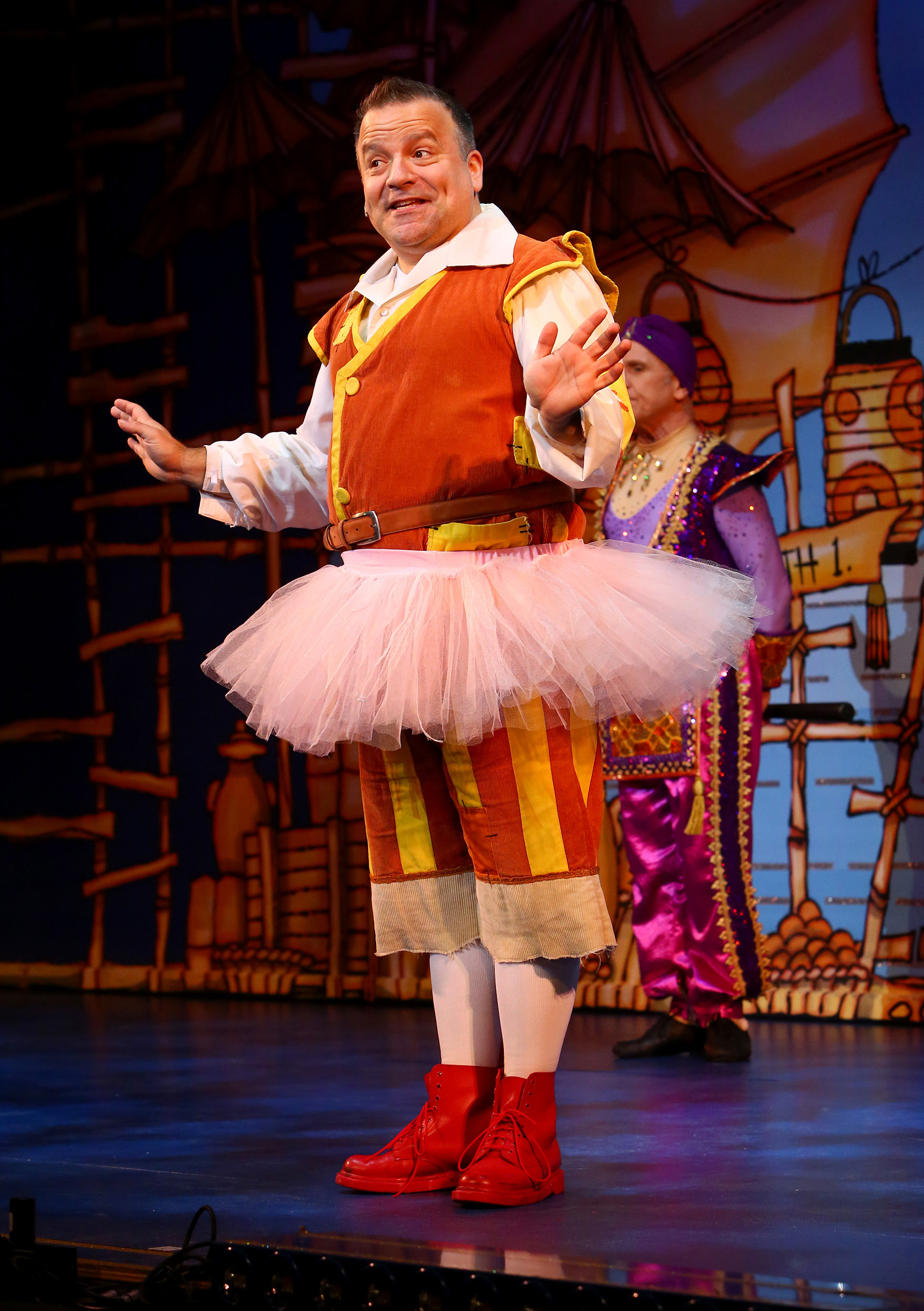