Keep Dancing takes to the stage at Milton Keynes Theatre tomorrow and the production promises to deliver an unmissable array of dazzling routines.

Strictly fever is already gripping the nation. The popular BBC reality television programme’s producers drip-fed us with news about the celebrity line-up for Strictly Come Dancing 2016 on social media throughout the summer and Saturday night’s launch show saw each of the contestants get paired with their professional dancer. The couples are now hard at work in rehearsals fine-tuning their debut dances – which means we have a few weeks to wait before the competition begins.

Fortunately, fans in the new city need not wait any longer to enjoy some glitz, glamour and good old fancy footwork as some of our favourite former SCD professionals and celebrities will be showcasing their best moves in Keep Dancing.

Keep Dancing is a celebration of dance, a two hour dance marathon just packed full of amazing routines! If you like watching dance on the television then this is the show to see as it is faster and even more entertaining experienced live in person. This is a production for everyone whether you are 6 or 60 – and any husbands needn’t moan at being dragged along as they are usually the ones raving about it the most afterwards!

Joined by a cast of world-champion Ballroom and Latin dancers, the stars will wow audiences with a steady succession of high-energy dance numbers.

Theatregoers can expect to see all of the traditional Ballroom and Latin dances alongside bonus genres including Lindy Hop, Disco, Contemporary and Jazz technique. With creative input from the Strictly pros and experienced choreographers Emma Rogers and Innis Robertson, the numbers ought to be nothing short of breath-taking.

Set to spectacular live music – that you won’t be able to resist having a boogie to yourself – Keep Dancing is likely to have every member of the audience dancing long into the night.

A version of this preview featured in the Milton Keynes Citizen GO supplement: 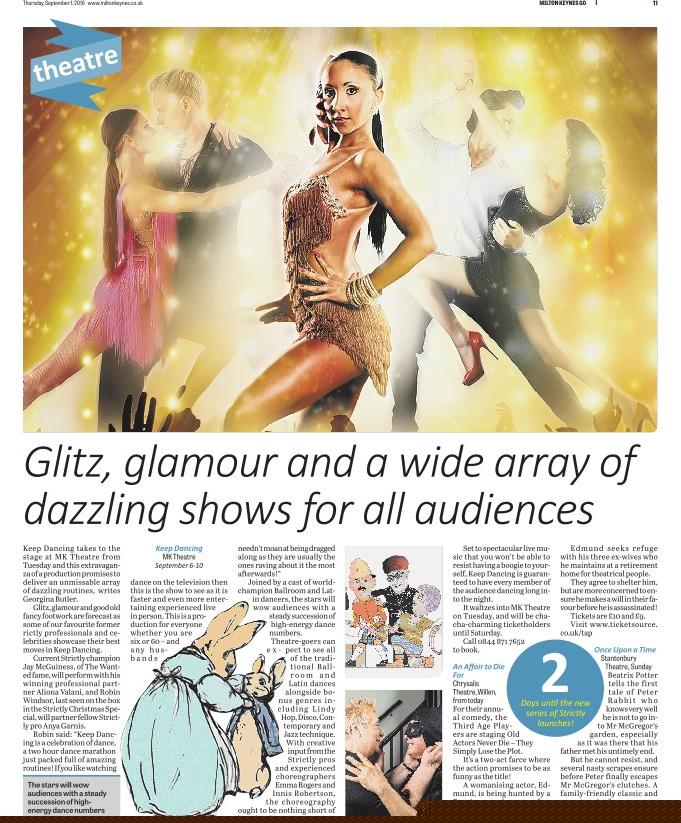