The company, under the direction of Tamara Rojo is intent on evolving the art of ballet. While still honouring the classical tradition (the dancers begin their Nutcracker season at Milton Keynes Theatre next week), English National Ballet is adding amazing diversity to its repertoire with fresh new works. Following the resounding success of Dust, his piece for the Lest We Forget programme, anticipation has been sky-high for Akram Khan’s Giselle.

In short, Akram Khan’s Giselle is a triumphant re-imagining of the 1841 Romantic Era ballet. All the essential themes — love, betrayal, revenge, the opposing realms of life and death — remain but Khan’s vision teases out the dark undertones that have always been there. Dragged to the surface, these elements are expressed with visceral urgency, arresting intent and harrowing sensibility. 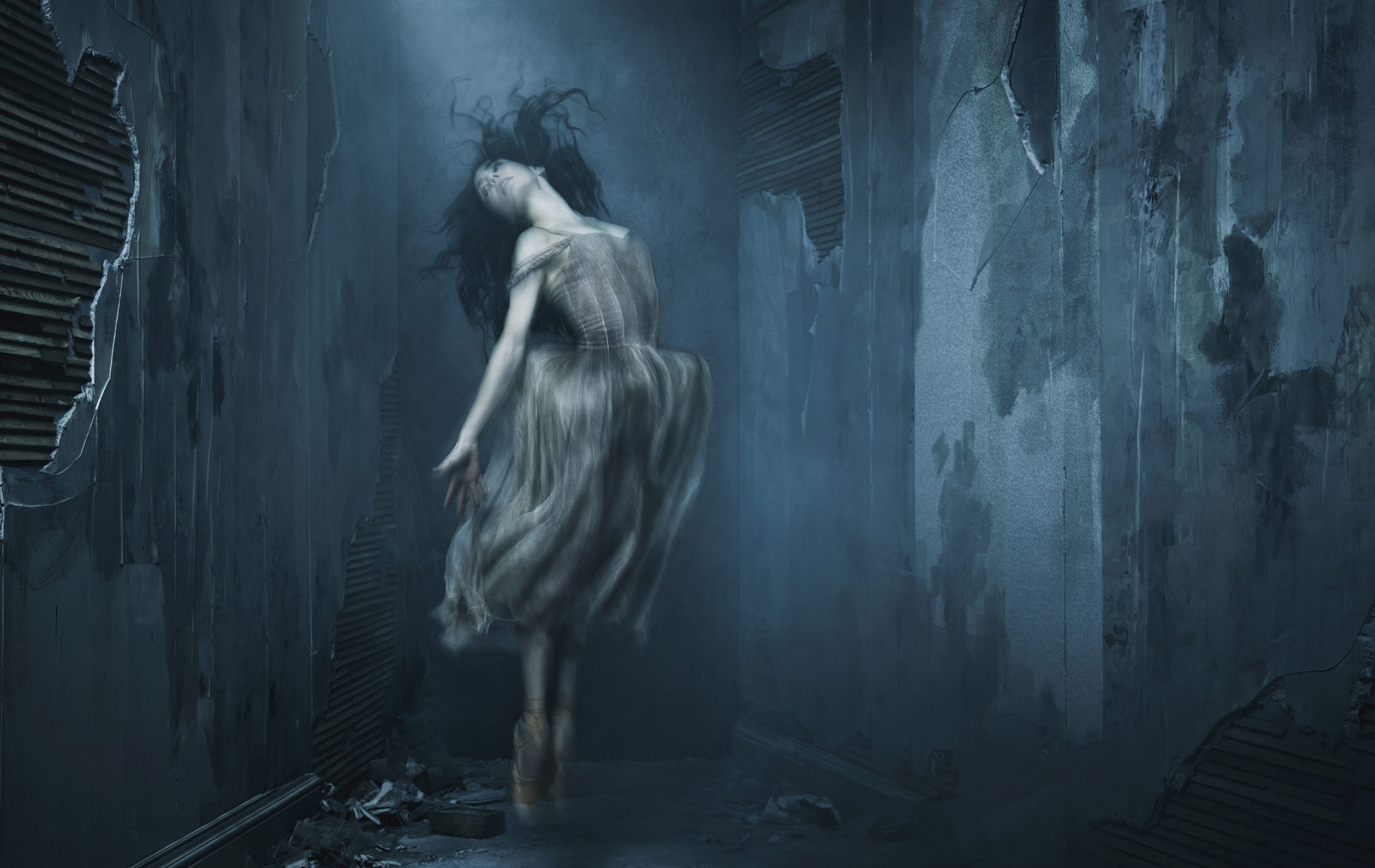 Throughout Act One of Akram Khan’s Giselle, we are enveloped in a community of former garment factory workers (the Outcasts) in an indistinct locale. Inspired by the marginalisation of migrants today, Khan swaps the Germanic setting inhabited by the earthbound peasants in the 19th century original for an abstract, shadowy landscape. With none of the quaint village charm or harvest-time colours to hide behind — and only an impressively imposing wall by way of set design — stark truths are laid bare in this industrial domain.

Giselle (a breathtakingly fragile yet fervent Alina Cojocaru in the cast I saw) is still a poor girl who falls head over heels in love with Albrecht (portrayed with astonishing athleticism by Isaac Hernández), a member of the wealthy class of landlords who disguises himself as an Outcast to woo her. The factory that Giselle and the other Outcasts once toiled in has been closed down. Now, they function as little more than entertainment for the landlords. This ruling class live a life of luxury beyond the wall that separates the two communities. Hilarion (afforded equal measures of charm and tyranny in Oscar Chacont’s characterisation) is a member of the Outcasts who loves Giselle too. He mediates the relationship between his own people and the visiting elite and quickly becomes wise to Albrecht’s deceit. Devastatingly, it is Hilarion’s compromised position straddling the two spheres that ultimately proves fateful for Giselle.

The imbalance of status between the exiled labourers and the landlords is made startlingly clear through the wealthy class members’ lack of movement. Dressed in outlandishly extravagant costumes, Fabian Reimair as the chief Landlord and Begoña Cao as Bathilde — the wealthy woman Albrecht is betrothed to — are extremely restricted. (Kahn’s Giselle recognises her own handiwork in the elaborate dress Bathilde wears, a narrative nuance that I find particularly poignant.) The presence of the landlords is preceded by a rumbling foghorn-like sound, followed by silence. It is amazing how authoritative these figures manage to be with only walking and contained gestures to execute – and without any musical accompaniment. In fact, throughout this ballet, the moments of stillness really emphasise how much the production as a whole moves us. Khan’s interpretation of the violence of inequality sees the Outcasts’ movement steadily build in momentum, their silhouettes storming across the stage. When they are motionless, whether reflecting on their circumstances or frozen under the rigid control of the ruling class, we feel their emotions just as strongly as when they sweep us up in an energetic frenzy. 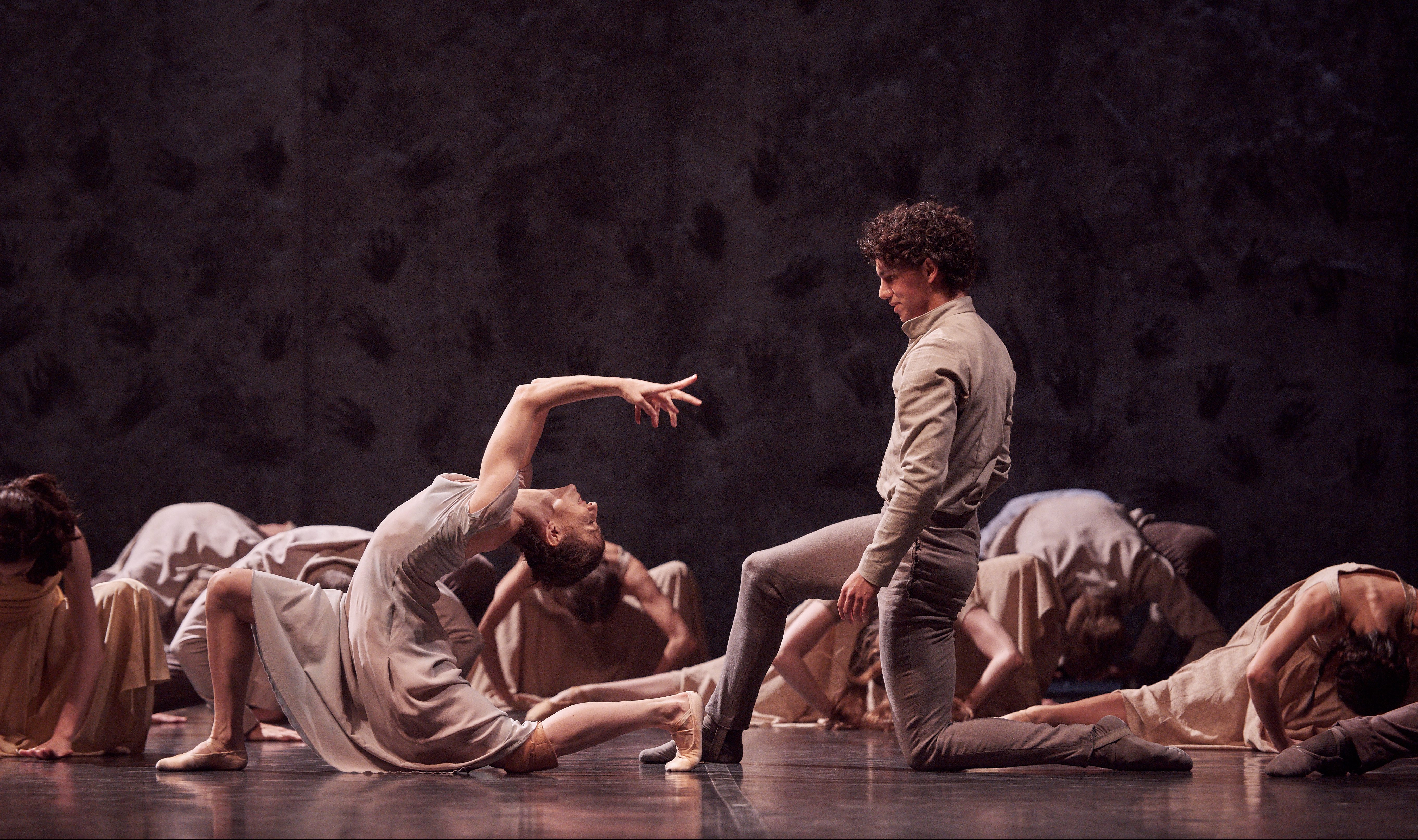 The dancing of the Outcasts is an electrifying blend of fluid movement. The choreography is influenced by Khan’s classical training in the north Indian dance form of Kathak; the multiplicity of physical possibilities offered by contemporary dance; and the grace, poise and power of classical ballet. Fast feet. Expressive wrists, fingers and arms. Deep contractions. Extensive back bends. Postures held on the floor which possess a strange sculptural beauty. Quick beaten ballet jumps that seamlessly slot into the relentless routines.

Act One is thrillingly corporeal. The bodies we see on stage are human. They are vocal. They breathe audibly. They are grounded in their movements and, despite pushing themselves to physical extremes, still manage to interact with each other in ways that seem to remind of us their mortality.

The vengeful sisterhood of the Wilis in Act Two, on the other hand, is almost grotesquely otherworldly. Here, Khan employs pointe shoes, a balletic device he has never incorporated into his dance works before. As the quintessential Romantic Era ballet, Giselle juxtaposes the human world against a supernatural world and the original second act has always had a hauntingly mysterious atmosphere, partly thanks to the use of pointe work. It traditionally depicts a pale and veiled Giselle rising from her grave to dance with the elusive, fairy-winged Wilis. These are spirits of girls who have been deserted or deceived by their lovers and died of grief before their wedding days. Although beautiful dancing under the moonlight, such sylphs have been reanimated by hate and hold a dangerous grudge against all the mortal men they encounter. In Akram Khan’s Giselle, his Wilis are similarly full of resentment but their anger is directed elsewhere.

In-keeping with his magnification of the ballet’s themes of inequality and injustice through the lens of brutal labour conditions, Khan’s Wilis are the ghosts of female migrant factory workers. As victims of industrial accidents caused by greed, neglect or exhaustion, they seek revenge upon those who have injured them. These phantoms have lank, loose hair and a wild look in their eyes. Dressed in grungy gowns (no gossamer or delicate wings to be seen here) they dance with bamboo canes which function both as weapons and as a reference to hand-looming in the pre-industrial past – a time when skilled craftsmanship was valued.

Khan’s ghost army enters the stage under a cover of darkness and multiplies menacingly as the dancers fan out to create horizontal lines, contorting their upper bodies while briskly bourréeing en pointe. Their style en pointe is less about weightlessly drifting and more focused on stabbing precision. This is emphasised when they strike the stage with their canes, producing a percussive battle cry. Without doubt, the company’s female dancers are convincingly terrifying as revived corpses.

Myrtha, Queen of the Wilis, is the haughty leader who welcomes Giselle to the spirit world. Khan rejects the idea of Myrtha simply whisking her wand overhead to summon her subjects and call forth Giselle as their new companion. His Myrtha (a spectacularly intimidating Stina Quagebeur) literally drags her latest lifeless recruit up from the floor. Coercing Giselle to stand en pointe, Khan’s Myrtha brutally props the slumping body up with her cane. She insists that Giselle fight to revive herself by embracing the Wilis’ shared desire for revenge. 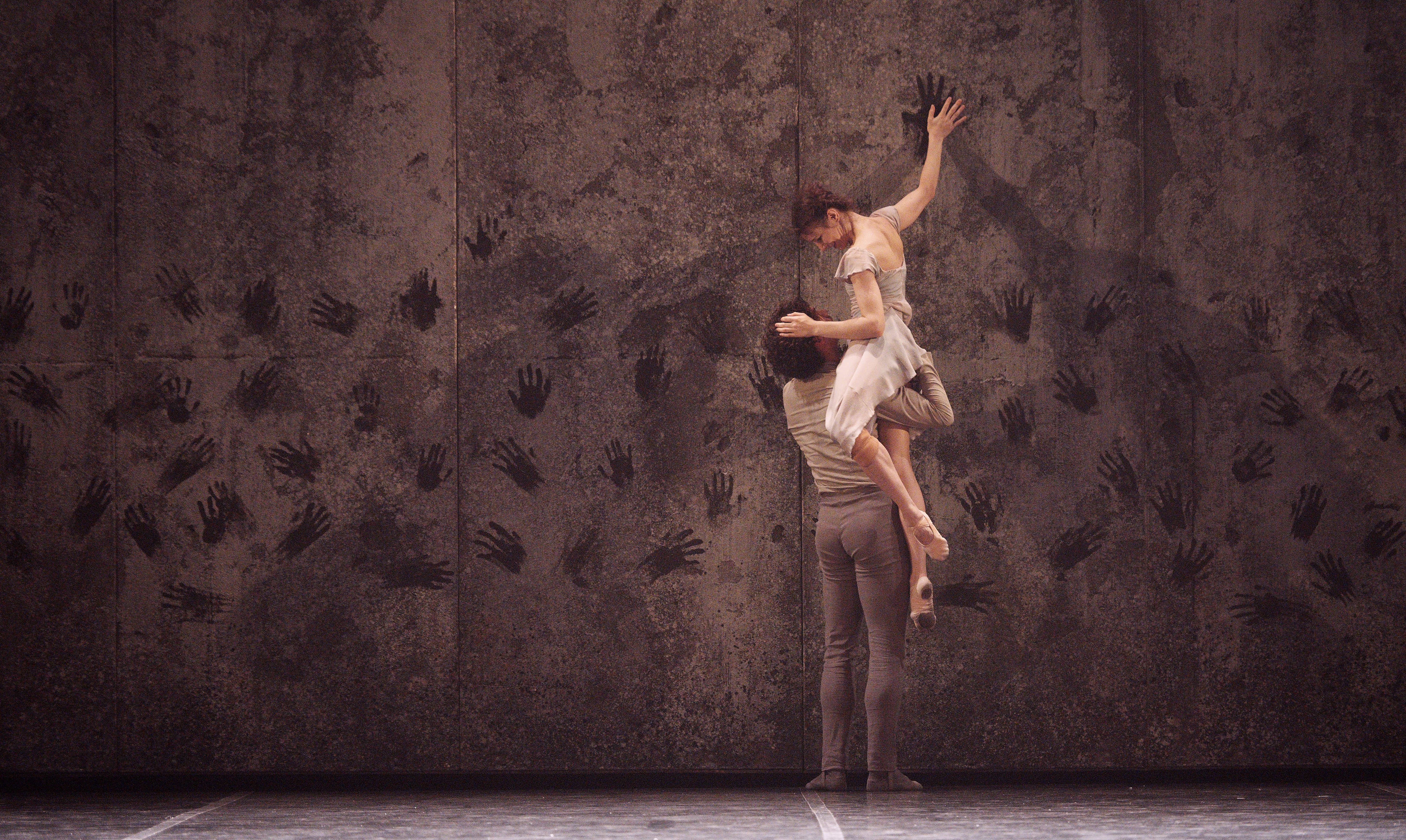 Although knowledge of Giselle in its original 19th century incarnation will undeniably help inform audience members in their understanding of the events that unfold in Khan’s contemporary update, it is by no means necessary. The dancing communicates the emotions that drive the story to such an extent that you would surely have to be carved from stone to not feel something from performances that so richly evoke tenderness, betrayal, community, memory, anger and rejection.

Adolphe Adam’s original score incorporated the “voices” of the characters in its ebb and flow; employed the technique of musical reminiscence to remind audiences of past events and established leitmotifs to forewarn audiences of the arrival of characters. The electro-orchestral soundscape by Vincenzo Lamagna for Akram Khan’s Giselle similarly adds to the storytelling. Industrial sounds suggest the abstract factory setting and we are notified of the ominous arrival of the Landlords (just not by the hunting horns that conventionally announced the approach of nobility). The ferocity of the music reflects the depth of feeling emanating from the artists on the stage and more lyrical segments add to the folk-inspired group dances and pas de deux moments. Vestiges of Adam’s melodies seem to haunt Lamagna’s compositions but, transfixed as I was by the production in its entirety, these musical traces disappeared almost as soon as I became attuned to them.

Dance says what words cannot – is that not, after all, the very reason why we dance? Capturing the overwhelming brilliance of English National Ballet in Akram Khan’s Giselle is certainly tricky with words. The timely narrative update, the intriguingly re-imagined characters, the confident attuning of balletic bodies to shape a unique dance language… 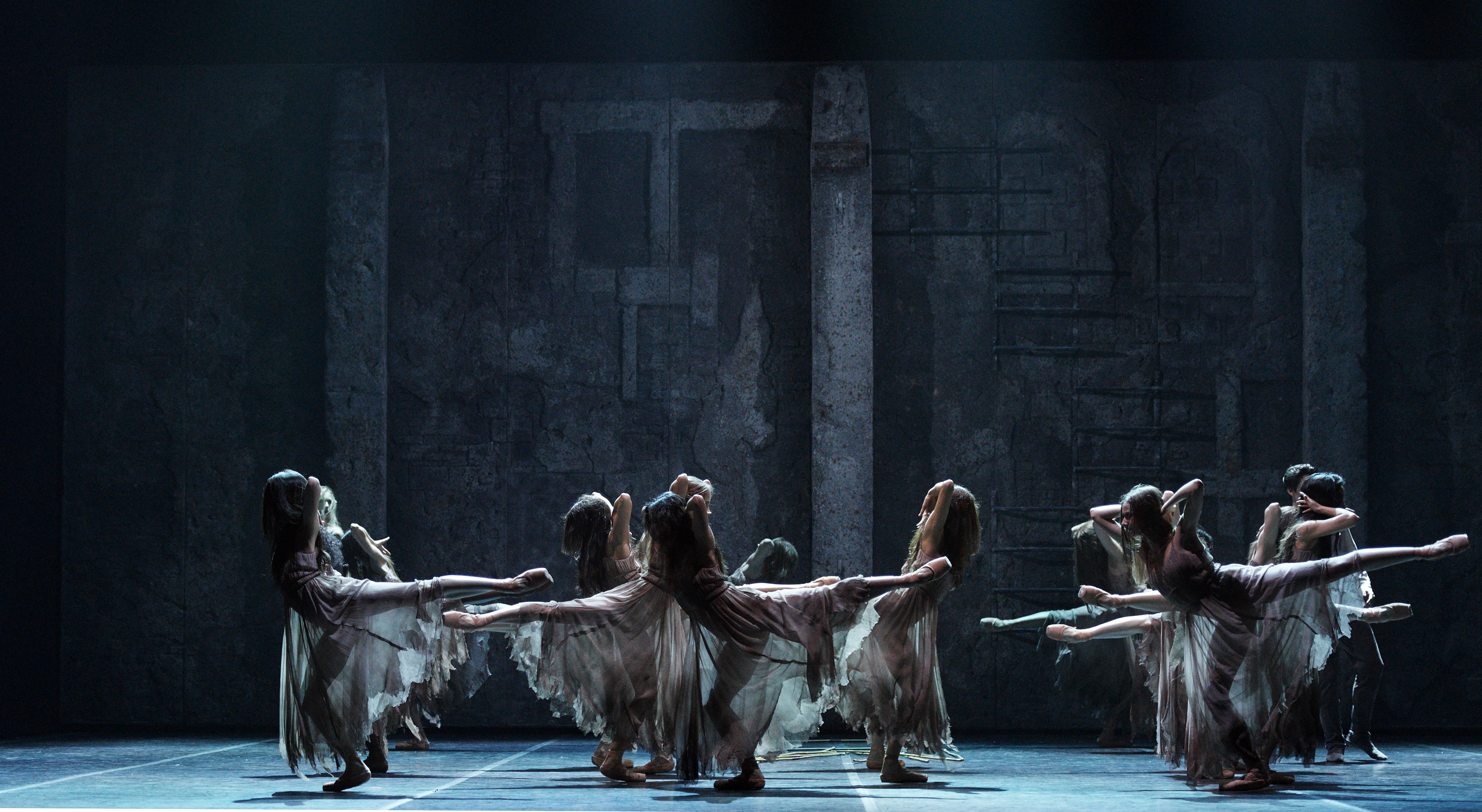 All remaining performances are sold out but booking is open for the production’s return in September 2017.