The title character in this year’s pantomime at Milton Keynes Theatre walks for miles in search of fame and fortune, strolling to London where he has been told the streets are paved with gold. Fortunately for theatregoers in the new city, Dick Whittington provides panto gold right on our doorstep! Melding magic, merriment and mayhem, the festive extravaganza is packed full of fun and stars a Christmas cracker of a cast.

Penniless Dick is played with warmth and wit (certainly more wit than is often granted to these boyish roles in panto) by actor Chris Jenkins. After packing his knapsack and lacing up his boots, this earnest chap ventures off towards the big smoke (striding “all the way from Cheltenham”), accompanied by his feline friend Tommy the Cat. When the duo finally arrive in the confusing city of Cockney conversation, they are disappointed not to be welcomed by golden paving stones. Completely famished and ready to earn an honest living, they discover that their promised land is overrun with villainous rats. Happily, they land on their feet (“miaow!”) when Tommy proves himself to be a top-notch rat-catcher and secures them both jobs in merchant Alderman Fitzwarren’s shop, Fitzwarren’s Stores.

Kev Orkian is panto personified as the shop’s assistant Idle Jack (swiftly promoted by Alderman to “assistant shop assistant” when Master Whittington appears on the scene!). Returning to the stage in what has become his regular Yuletide gig (Aladdin, Snow White and the Seven Dwarfs, Cinderella), Orkian easily proves why he is without question one of the UK’s finest entertainers. As an internationally acclaimed comedy pianist he is well-practised at simultaneously tinkling the ivories and tickling funny bones. With no piano in Dick Whittington (all the fantastic music is overseen by “Uncle Baz”, musical director Barry Robinson), Orkian is free to roam around the stage and has the audience in stitches throughout. 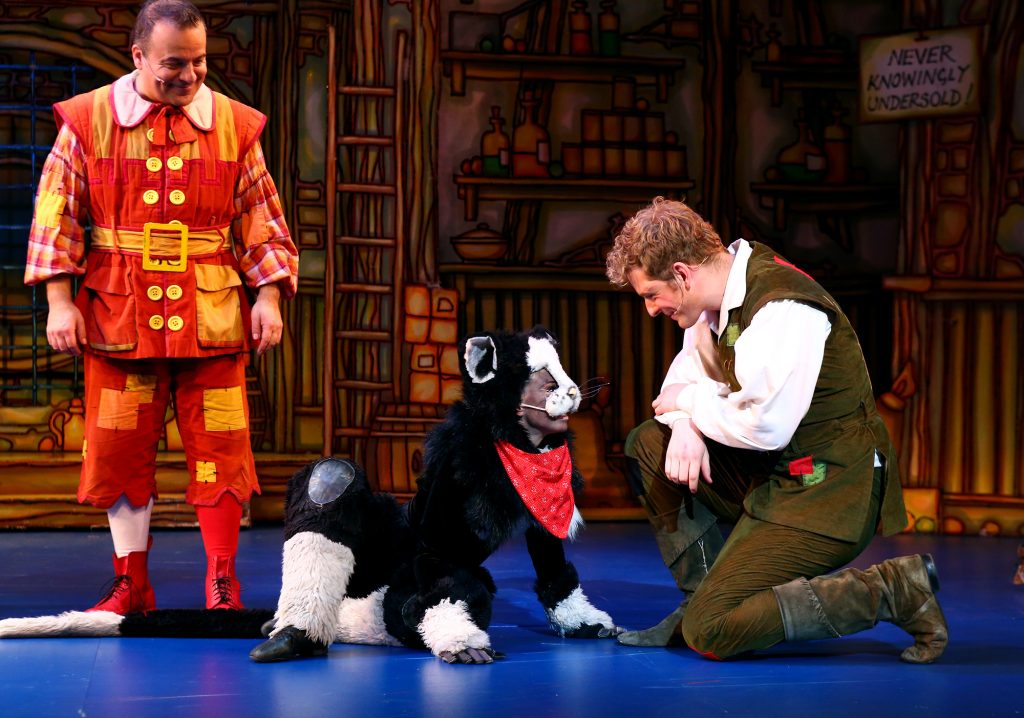 We are quickly reminded of just why we love our Kev so much. He makes a hilarious entrance, drolly alludes to the similarity of his current character to those he has played in bygone years and finds a way to turn each and every scripted quip; spontaneous slip, trip or fall; and unexpected moment of (lively) live theatre into comedy gold. Positively fizzing with elated energy, he delivers lines with amusing aplomb, fearlessly ad-libs and throws everything into slapstick scenes. Tongue-in-cheek remarks such as “Look at me, look at me, I’m all over the shop!” would fall flat without his exuberant, energetic persona filling the stage as he zips about the set. In short, his presence guarantees giggles, which grow into guffaws as the production progresses.

Orkian’s Idle Jack banters with everyone (the colourful individuals onstage and unsuspecting members of the audience) but his comedy pairing with Sarah the Cook (this panto’s dame, ably played for laughs by Kevin Brewis) is particularly risible. In a side-splitting sausage sketch, the shop assistant and his mum attempt to bake sausage pie. Together they are ridiculously riotous and a malfunctioning oven that wouldn’t open only added to the kitchen-based chaos on press night! When Idle Jack was instructed to “separate the eggs” I was already “cracking up” in anticipation of what Orkian’s response would be. Really, by the time a truly “battered” sausage is under the spotlight, tears of laughter will be glistening in the corners of your eyes.

Equally silly while still successful is the now-familiar Twelve Days of Christmas performed with a comedy twist. Idle Jack, Sarah the Cook and Bosun Bill (a ship’s captain with a propensity to pass wind played by actor Shane Knight) belt out the festive favourite, replacing the classic items with daft substitutes. So, instead of “five gold rings” we have “five toilet rolls”. Fans of the light-hearted interlude will be impressed with the newfound life it has been given for this year’s run – a #throwbacksketch given an injection of #fullonflingingfun. 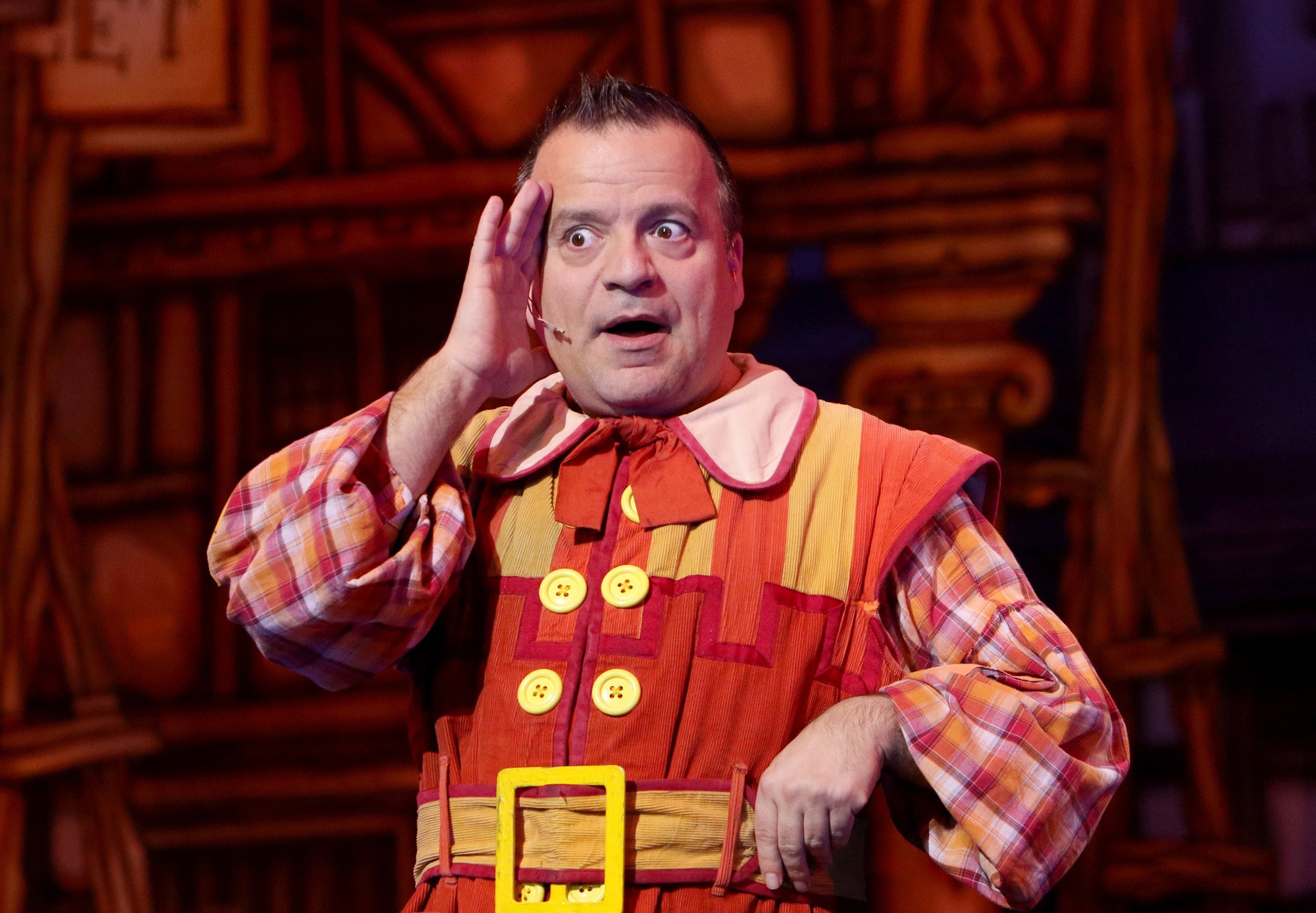 Another winning duo to revel in is Fairy Bowbells (Stacey Solomon) spatting with the baddie of this pantomime, Queen Rat (Samantha Womack). The Fairy Bowbells gives Dick Whittington its sprinkling of myth and magic, ensuring that Dick’s journey towards ‘happily ever after’ continues by waving her wand and casting a spell to help him dream of the future. Queen Rat, on the other hand, is a royal rodent who only surfaces from the sewers to stir up trouble for the likeable lad and his charming cat. These two strong female leads symbolise good and evil and their excellent exchanges of insults – which, in traditional panto style, (mostly) rhyme – are extremely well-executed.

Solomon rose to fame on XFactor, won ITV’s I’m a Celebrity… Get Me Out of Here! and is in-demand as a television presenter. As Fairy BowBells, her smile lights up the stage and her voice is crystal clear when speaking and singing. Slightly tentative to begin with on press night – no doubt thanks to the social media storm following opening night when she had a clipboard to prompt her – her confidence improved as the night went on. Just for the record, there was not a clipboard in sight and she dazzled. Possibly not as much as her absolutely blinding dress but that is more testament to the incredible costume designers behind the scenes than a reflection on Stacey herself.

We know Samantha Womack as feisty Ronnie Mitchell on EastEnders but she had a rich and varied performing career before joining Albert Square and it shows in Dick Whittington. Womack is a talented singer and performs a sizzling jazz version of Feeling Good. She rolls her “r”s with sinister intent and stalks the stage surrounded by her very own rat pack (dancers and juvenile chorus performers dressed in full body skin costumes as cartwheeling rodents). When this Queen Rat asks “Don’t you just love me?” we boo as we are meant to but, really, agreement is the true answer as she is gloriously evil. Sniffing the air disdainfully and informing us that she thinks she can smell a fairy, Womack demonstrates perfect comic timing and delivery with lines such as: “You smell like something you buy out of Lush” snidely directed at Solomon’s Fairy Bowbells. 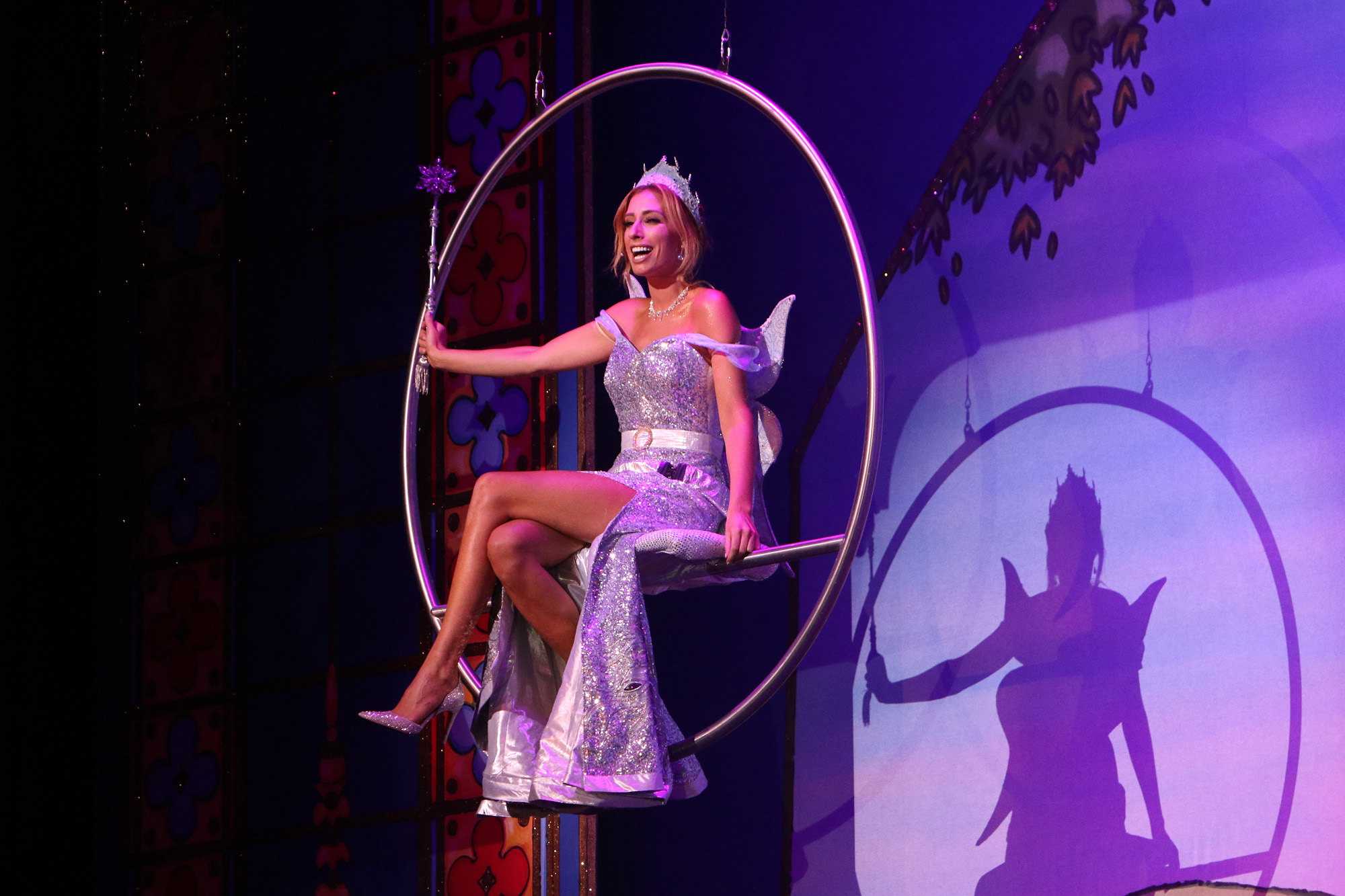 The stars shine brightly in Dick Whittington but so too do the supporting cast. Hannah Ponting as Dick’s love-interest Alice Fitzwarren is a delightful all-rounder, whipping up a frenzy with her opening number, Queen’s Don’t Stop Me Now. This song gets the show off to an electrifying start, although the music did seem a tad too loud. Also great is Marc Pickering, who plays a quietly authoritative Alderman Fitzwarren and, later, a Moroccan sultan. He is making a return to Milton Keynes Theatre this year after playing the baddie in Aladdin last Christmas.

Cartwheeling dancer Sophie Hart makes a marvellous moggie. Her paw-licking, head-cocking and loose-limbed posing as Tommy the Cat is purr-fect. The dancers and juvenile chorus performers work as hard as they always do in pantomimes. Appearing as villagers, rats, sailors and bell-ringers among other things, the older dancers show off a variety of dance moves – including the expected crowd-pleasing high-kicks, cartwheels and flips. Meanwhile, the youngsters dance their jazz shoes off and fully immerse themselves in the experience – all while keeping those showbiz smiles firmly in place.

All the familiar, enjoyable elements of the pantomime tradition endure in this Dick Whittington. There are rhyming couplets, silly slapstick scenes, upbeat song and dance routines (what an inspired choice to include DNCE’s Eat Cake By The Ocean in Act Two!), outlandish costumes, celebrity turns and lots of opportunities for audience participation. Less familiar is the need to don a pair of 3D specs for a big-screen underwater adventure, or the excitement of being swept up in a competitive lip-syncing battle. ‘Yule’ definitely be blown away by these extremely entertaining additions! 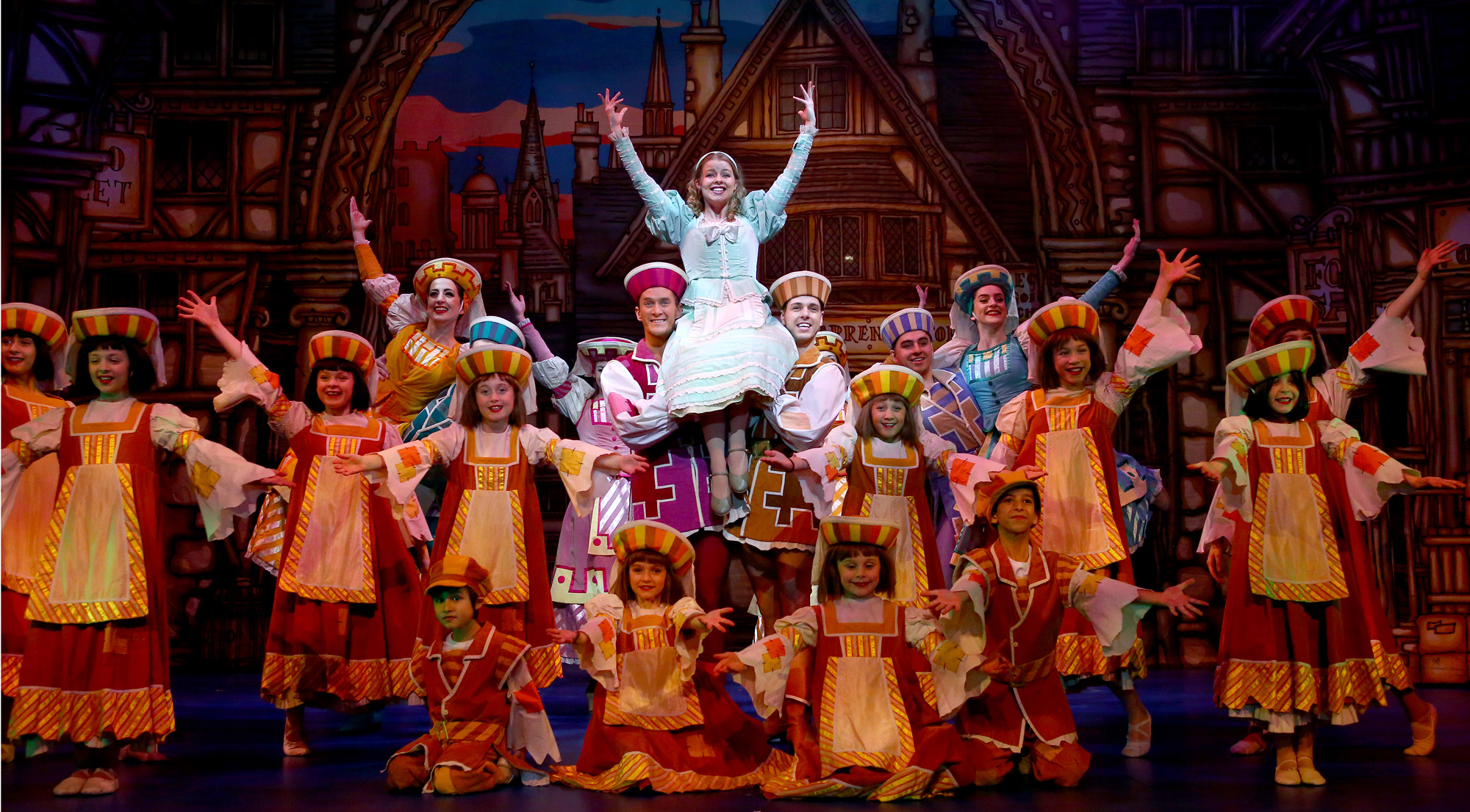 Pantomimes hold a special place in my heart. I go from reminiscing to the time when I was one of those youngsters dancing on the stage, to switching into dance teacher mode when the choreography is being executed, before going right back to being a dance/theatre reviewer intent on assessing the merits of the onstage action.

Still, when I find myself having such an entertaining evening that I can only surrender to the overwhelming need to laugh, clap and get up on my feet to join in, I know that the show is a hit. Dick Whittington is SO MUCH FUN!

Forget any winter woes and make this pantomime part of your festivities this Christmas. You won’t be disappointed.