Madcap musical Wonderland is currently whisking visitors to Milton Keynes Theatre off on a magical adventure. Now, call me mad, but this contemporary creation – which reflects aspects of modern day life while cleverly capturing the peculiar charm of Lewis Carroll’s Alice’s Adventures in Wonderland and Through the Looking Glass – managed to speak to both the girl I used to be and the woman I hope to become.

We all have days when thoughts of escaping the practicalities of living in the real world for a while consume us. We imagine how wonderful it would be to flee our humdrum existence, abandon our responsibilities and free ourselves from the shackles of expectation. Still, we don’t all cope with days like this by following a random rabbit and ending up in a kooky kingdom. Of course, as we all know, Alice does follow that rabbit. She follows him when he slips down a rabbit hole and finds herself visiting a realm which is home to the strangely talkative White Rabbit and a host of curious characters including the Mad Hatter, Caterpillar, Cheshire Cat, March Hare and the pompous Queen of Hearts.

An entertaining experience from the start, Wonderland irrefutably illustrates that every adventure requires a first step and insists we are all capable of taking that step – no matter who we are or how grown up we may consider ourselves to be. Starring West End sensation Kerry Ellis, it’s essentially a loud and proud exploration of who we are and who we want to be. 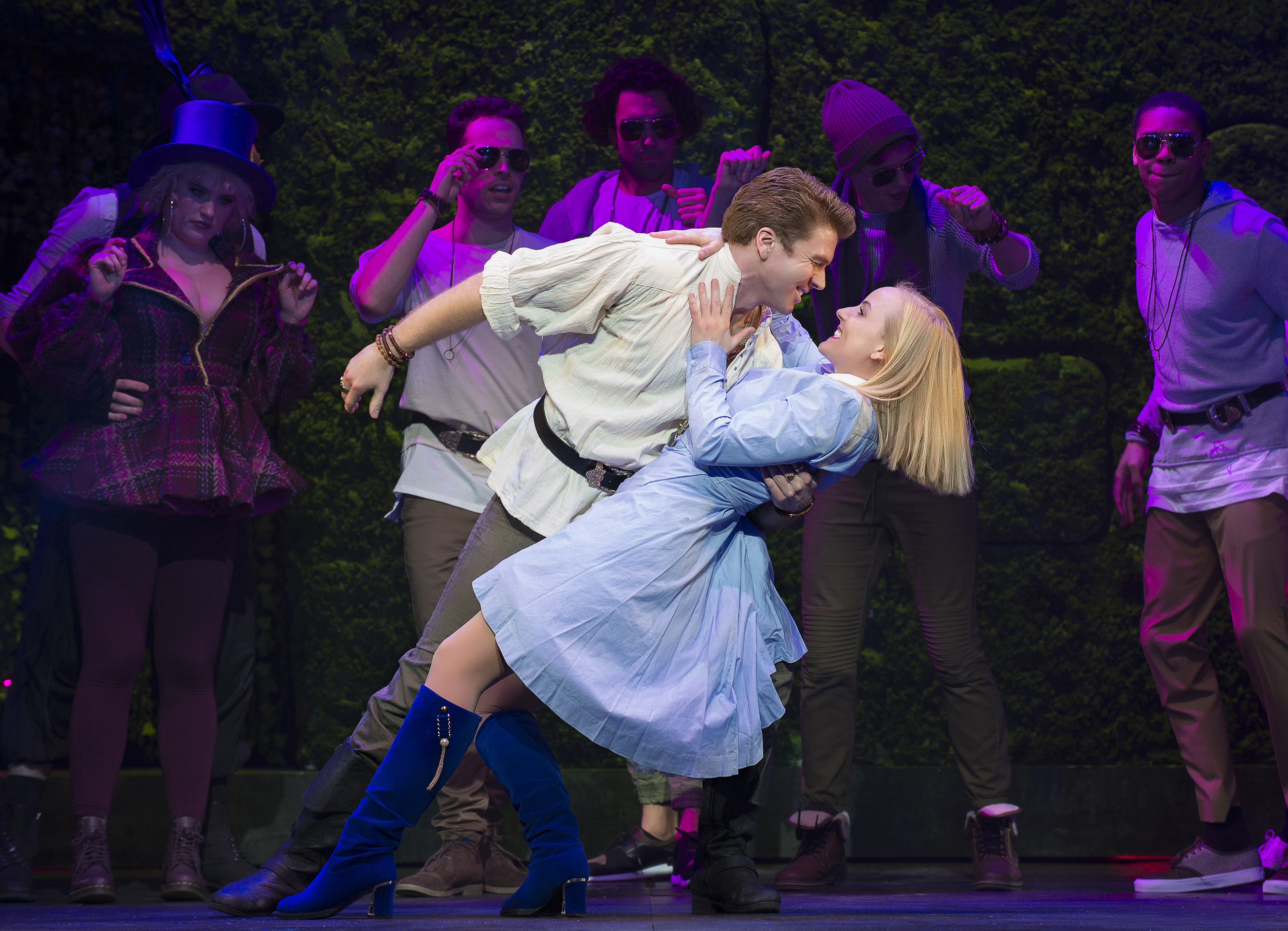 Based on the book of the same name by Gregory Boyd and Jack Murphy, Wonderland features upbeat music by Frank Wildhorn and cogent lyrics by Jack Murphy. Protagonist Alice is a disillusioned single mum and we meet her on the worst day of her life to date. It is her fortieth birthday; she is running late; her car has been stolen; she is fired from her job; and she receives a letter notifying her that her ex-husband is getting remarried. A former teacher, Alice has been working as a travel agent and harbouring childish fantasies that, one day, her ex-husband will swoop back in to rescue her and her teenage daughter Ellie. Sensible Ellie, on the other hand, saw through her father’s duplicitous behaviour long ago and realises they are better off without him. So, from the moment the onstage action begins, we are invited to wonder just who is behaving like the child and who is adopting the role of the adult in this mother-daughter duo.

While the narrative centres on the idea that we all have our own looking glass selves to reveal (the side of us that we keep hidden) and that we must all walk our own paths as we journey towards being who we are meant to be, a love story also blossoms in Wonderland. Alice’s insecure neighbour Jack admires her from afar but Alice is so wrapped up in her own issues that she has no idea of his name. It is fortuitous, then, that Alice, Ellie and Jack all end up chasing the White Rabbit to Wonderland. Together, they discover that magic and metamorphosis is always possible. You just need to be open to the wonders of everyday life.

Alice’s adventure begins when she claims she “doesn’t want to live in the real world”. Kerry Ellis is nothing short of out-of-this-world brilliant as Alice. Known for starring as Elphaba in the original West End cast of Wicked, she has since taken Broadway by storm with her incredible stage presence and vocals. Ellis gives the downtrodden Alice heart and soul, singing beautifully and artfully expressing Alice’s indecision and dissatisfaction as she swings from wanting to be the perfect wife and mother to wanting nothing more than to leave the real world behind. 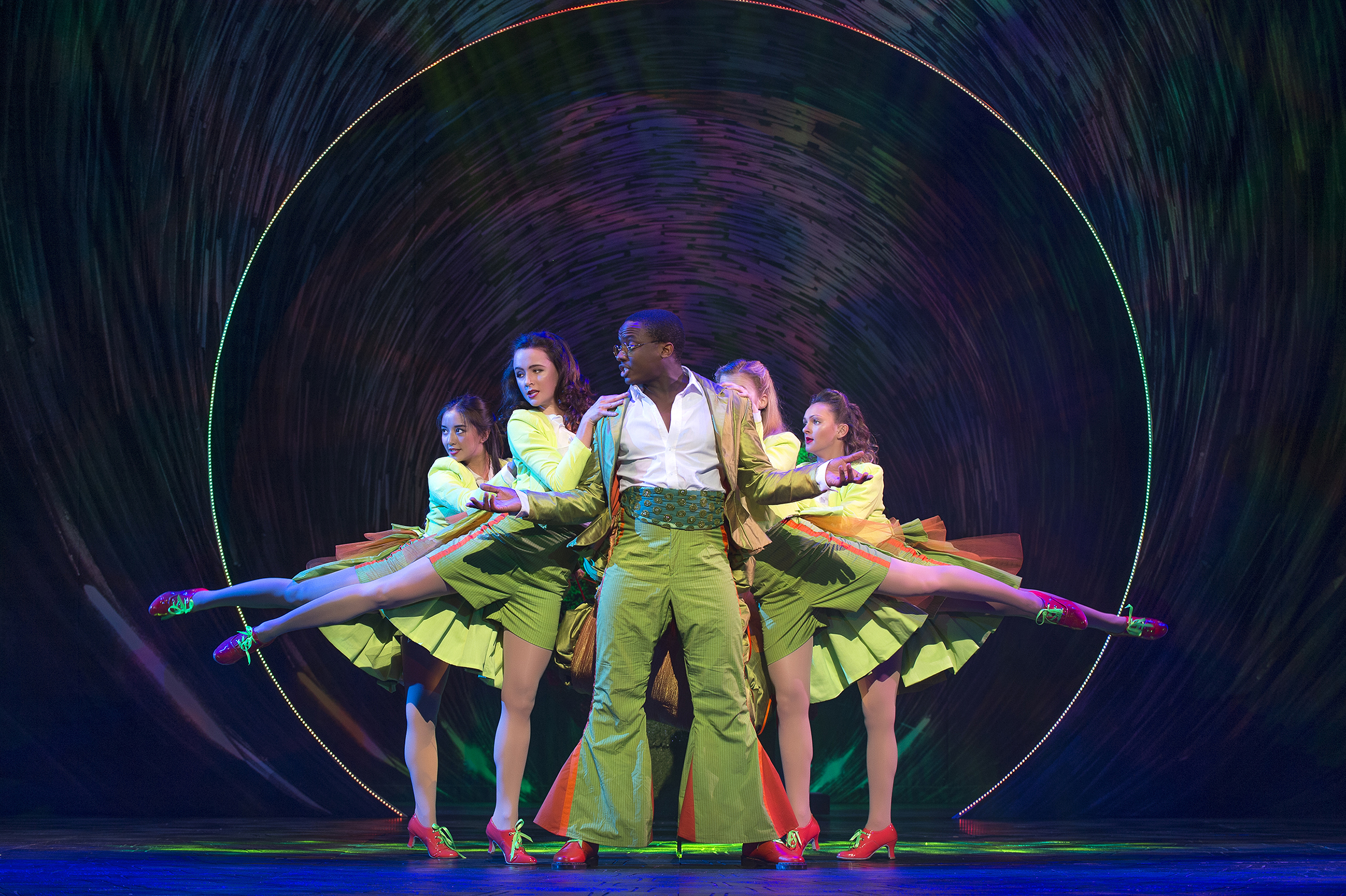 The whole cast can carry a tune and the characterisation is spot-on. Naomi Morris is perpetually believable as Ellie, convincingly portraying both the sensible daughter she has had to be and the bolshie teen she has every right to experience being. Her rendition of the sweet anthem ‘Home’ is enchanting. However, when she is not singing, Morris’ enthusiasm means she does occasionally gabble the odd line of speech. Stephen Webb conveys Jack in true Clark Kent style. Meek and mild prior to the transformation that occurs when Jack steps through the looking glass, he becomes a cheesy boy-band star lookalike determined to be Alice’s hero in ‘One Knight’. Webb has a powerful singing voice and manages to retain the auditorium’s attention during a playful number that feels just a tad longer than is strictly necessary.

Notably, there is a lot of talking in Wonderland, it is not a sung-through musical. This is absolutely in no way a bad thing as the script makes some quite astute observations and is amusing. More importantly, the singing is excellent during all the featured songs. However, at times, the music is too loud and the characters seem to be competing amongst themselves for our attention during quite long scenes. Furthermore, dancing-wise, the movement seems to almost pass us by as there are so many characters who are all so individual that slick, polished routines do not feature in the same way as they do in the classic musicals. Nonetheless, the choreography in ‘Advice From A Caterpillar’ is well-developed, with crooning Caterpillar Kayi Ushe accompanied by a high-kicking, rib-rolling, hip-shaking female ensemble (Caterpillar’s Legs). And the ‘Cat Shoe Shuffle’ throws a spotlight on Dominic Owen, who walks on his hands as the Cheshire Cat, and gives the ensemble dancers a chance to let loose as frisky felines.

Wendi Peters has little more than a cameo role as the Queen of Hearts yet manages to steal the show whenever she struts into a scene. The former Coronation Street actress has a magnificent set of lungs; makes a riotous performance out of scoffing jam tarts and unquestionably delivers as the quintessential baddie. The quirky story is set in a land where it is always “time for tea” and the bizarre characters at the Mad Hatter’s tea party include a love-struck Hare and a sleepy Dormouse. Between the crazy critters, the rowdy staging and the tale itself, at times Wonderland verges perilously close to pantomime. However, as pantomimes are becoming more like full-blown musicals every year, this might not be a bad thing either. Alice learns that we have a responsibility to reinvent ourselves as individuals … theatre must evolve too! 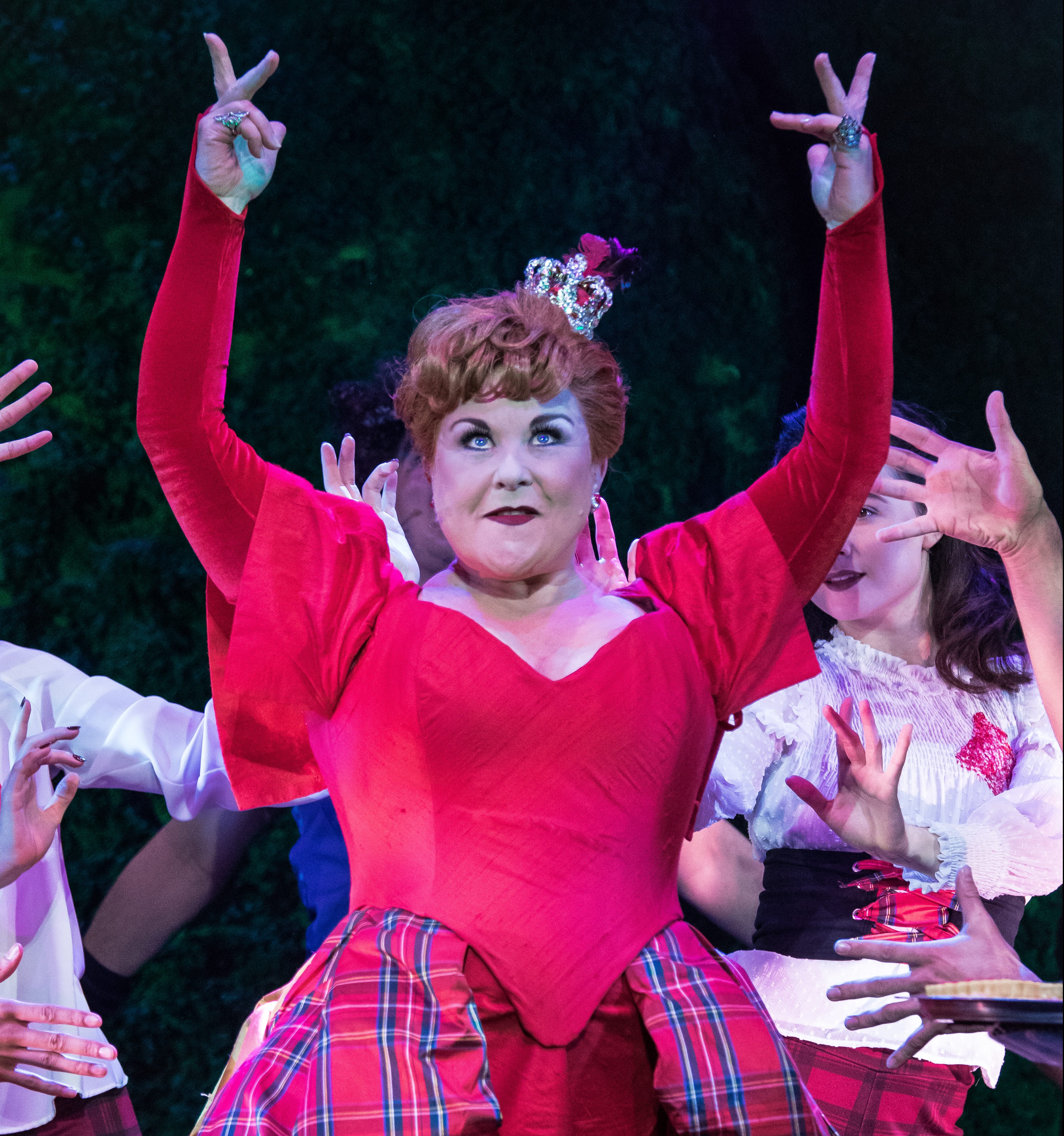 In its entirety, Wonderland seems to possess the story, heart and sprinkling of magic that all great musicals require. Very much created today, for today’s audiences, this zany show is full of quips and provides a commentary on life that ought to strike a chord with most people. Still, I do think that, with its female leads, youthful exuberance and navel-gazing, Wonderland likely has the greatest appeal for teenage girls and young women. (There were a lot of young girls in the auditorium and, during the interval, those girls were happily humming the tunes and reciting the lyrics.)

Wonderland proves to be feel-good entertaining escapism thanks to its inspiring message to be yourself and its lively characters and soundtrack. The costumes are cheerful and suitably wacky but the sets are relatively understated, considering this is Wonderland. Still, I liked the rabbit hole effect of circular trails of lights framing the proscenium arch and touches such as a hedge from the Queen of Hearts’ labyrinth garden functioning as a doorway into a secluded spot where characters could have a private rendezvous.

If you want a fun and easy-going visit to the theatre, it is well worth following the White Rabbit into the madness of Wonderland. And remember: We all need to realise that there is a little bit of wonder to be found wherever we go. It is up to us to be who we want to be and live a life we can let ourselves love!