Contemporary tunes and a myriad of movement styles ensure Vincent Simone and Flavia Cacace’s Tango Moderno is an entertaining and accessible dance show.

It takes two to Tango – unless you are Flavia Cacace missing regular partner Vincent Simone. The former Strictly Come Dancing professionals’ new production (co-choreographed with director and choreographer Karen Bruce) uses the power and passion of well-executed dance to make a series of observations on modern life. Unfortunately, the dazzling duo are struggling to grace the stage together so far on the tour due to Vincent suffering with a recurrent injury.

Still, the show must go on and the always fabulous Flavia was partnered by not one but two stand-in dancers on opening night of Tango Moderno at Milton Keynes Theatre: Pasquale La Rocca and Leonel Di Cocco. 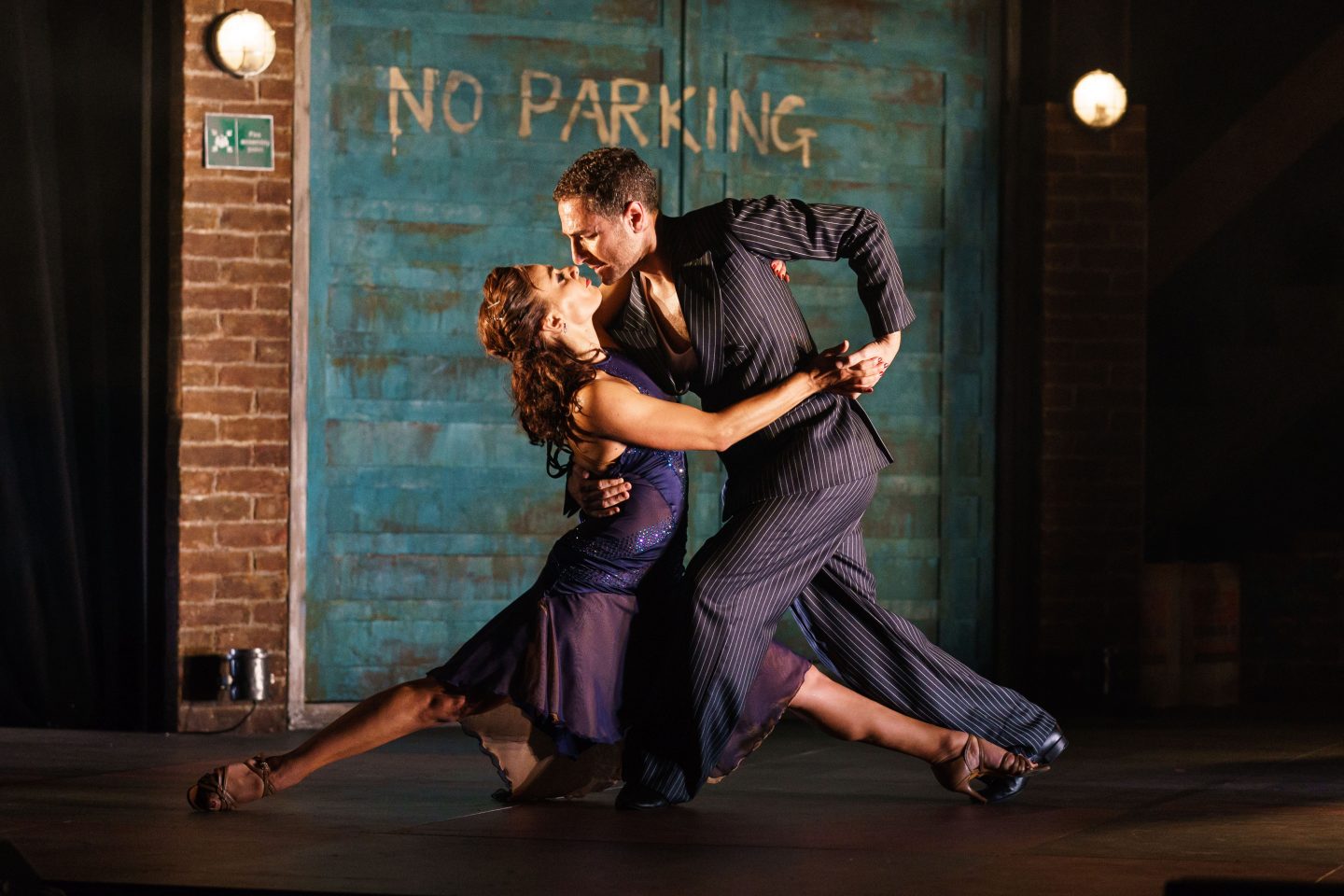 Pasquale La Rocca is a professional Ballroom and Latin American dancer who is originally from Italy. He was principal dancer, dance captain and assistant choreographer for the touring company Burn The Floor for four years, performing in Europe, America, Asia, South Africa and, in 2016, in London’s West End. Meanwhile, Leonel Di Cocco has been working as a professional Argentine Tango dancer for over ten years and is currently the choreographic director of the traditional show Señor Tango in Buenos Aires.

As a trio, Cacace, La Rocca and Di Cocco made everything work but Vincent’s absence is unavoidably disappointing. In recognition of this, Flavia stepped out onto the stage before the show to apologise in person on Vincent’s behalf.

Fortunately, the pair have an incredibly supportive fan base and the show remains full of Vincent’s influence – from the scintillating Tango choreography to a reworked script with references to the non-appearance of the much-loved leading man. Indeed, Tango Moderno partly came about because Vincent and Flavia were overwhelmed by messages from audience members once the final curtain went down on their previous production, The Last Tango, which was intended as their farewell to theatre. Touched by fans’ sadness and still full of ideas for choreography that they had not been able to squeeze into The Last Tango, the dancers decided to bring us Tango Moderno. 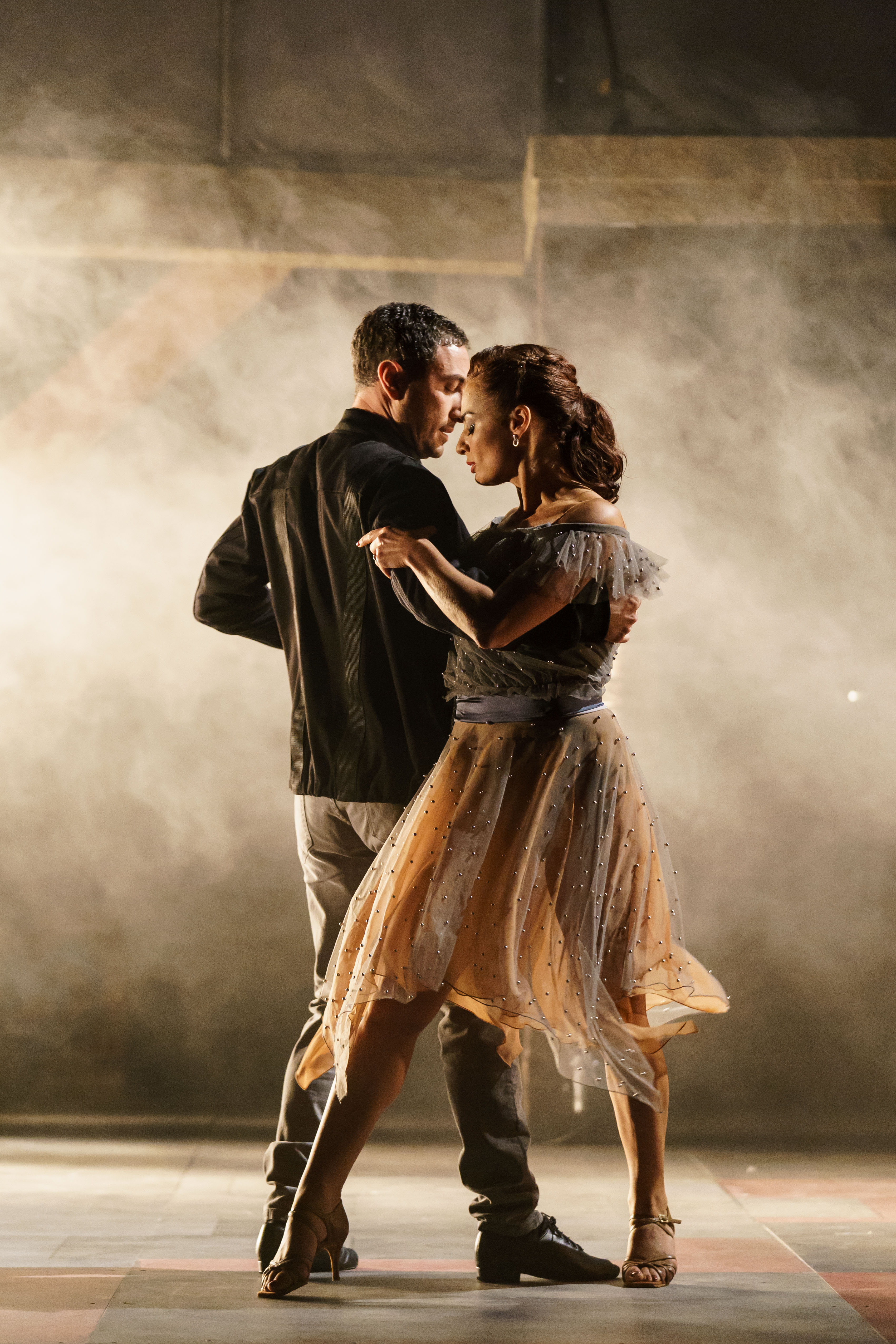 Compared to the productions in Vincent and Flavia’s back catalogue (Midnight Tango, Dance ‘Til Dawn and The Last Tango) the plot of Tango Moderno is somewhat reductive. Flavia channels Cupid, nudging together lonely individuals who are looking for love in today’s self(selfie)-obsessed, technology-tainted world. So, we have millennials engaging in a “Bla Bla Bla Cha Cha Cha”, swiping right on dating app Tinder and half-heartedly living life while commuting and working.

Flavia – accompanied by either La Rocca or Di Cocco in various scenes – seems to be on a mission to share the magic of dance with unsuspecting characters to help them be open to the possibility of genuine love. From this, we gather that we must make time to follow our own dreams and pursue true love – and that the only way to do so is to step onto the dancefloor, let loose and surrender to the rhythm of our hearts.

The show is light and fun and packed full of terrific singing and dancing. Although not as affecting as past productions, Tango Moderno follows a similar format in that the dancers are joined onstage by singers who belt out a succession of songs which cumulatively develop the story. Rebecca Lisewski is outstanding as a singer/dancer, impressing during fast-paced dance routines and when she is in song-bird mode stood on a platform high above the stage. Guitarist and singer Tom Parsons is similarly superb as our narrator, delivering a corny poetic commentary (written by Richard Marsh) with easy-going élan and wowing us with brilliant renditions of chart hits. 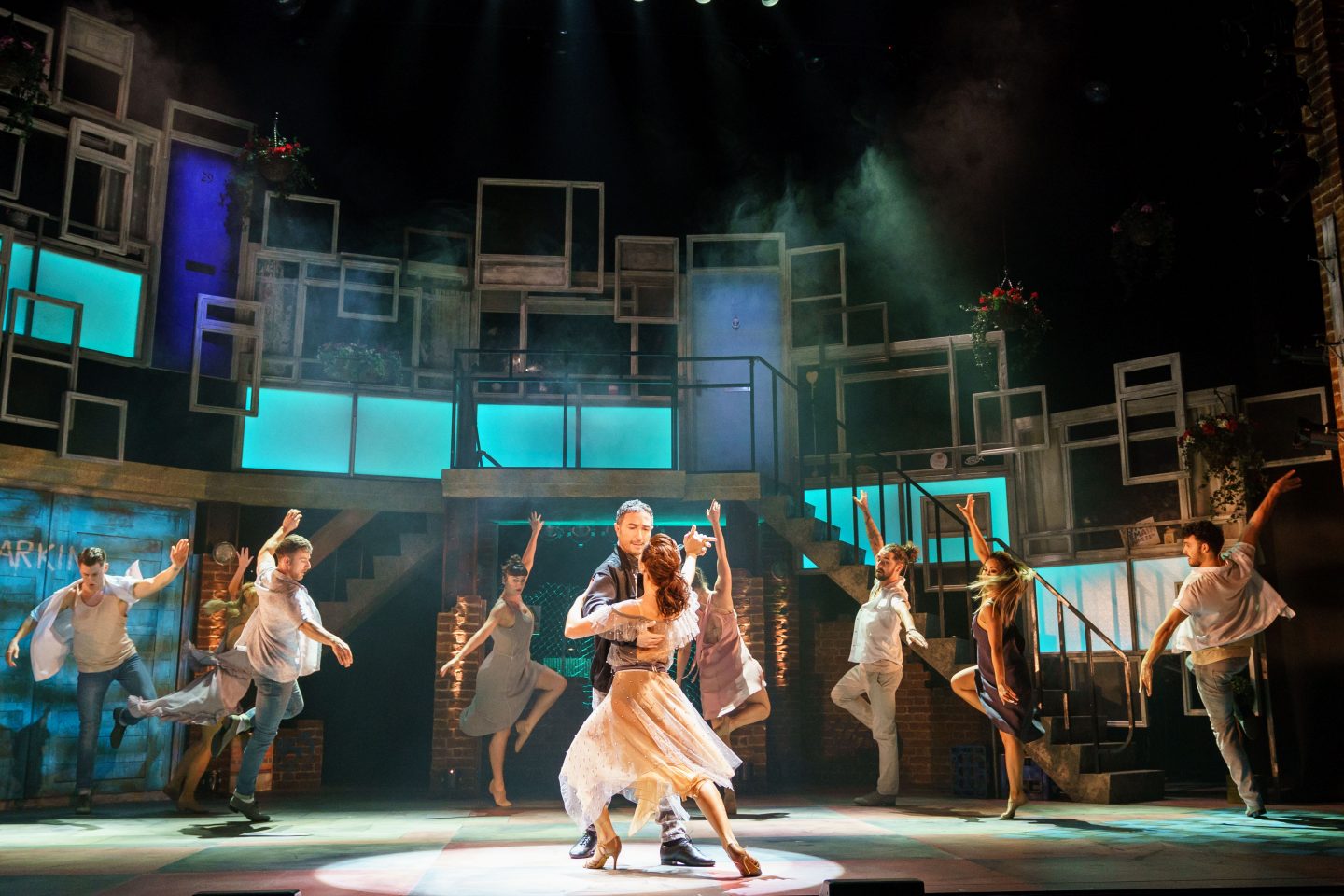 The dance routines in Tango Moderno are youthful and slickly performed. The songs they are set to include music from a range of eras with plenty from today, including Michael Buble’s Haven’t Met You Yet, Sam Smith’s Lay Me Down, Ed Sheeran’s Shape Of You and Bruno Mars’ The Lazy Song. Choreography-wise, the expected Tango and Argentine Tango feature as striking highlights but there is also an elegant waltz, a sprightly foxtrot and a cheeky cha cha cha. Beyond the Ballroom and Latin American content, the production is overflowing with compelling contemporary, energetic hip hop and eventful theatrical dance numbers.

Flavia is stunning. The two dancers drafted in to partner her present her beautifully and, although the whole company impresses, once Flavia is on the stage all eyes are drawn to her. Of her two partners, I found it more difficult to warm to Argentine Tango specialist Di Cocco. I’m not sure if it was the slope of his shoulders, the direction of his gaze or his fit with Flavia. There was just something that left me feeling disconnected from his performance. La Rocca, however, steadily grew on me as the show progressed and I would have loved to have seen an Argentine Tango performed by him and Flavia. Although this might not be too feasible due to the height difference between them.

Dancers are taught from a young age that technique frees you to perform, to express and to live every movement. The cast of Tango Moderno undeniably embody this maxim and their well-honed performances light up the stage. Ultimately, despite Vincent Simone and Flavia Cacace’s Tango Moderno not quite seeming to deliver what it promises (we had no Vincent on opening night and there is a lot more than sultry Tango to appreciate), the production is extremely enjoyable. In fact, I’d say it’s guaranteed to have even the most reticent theatregoers delighting in the sheer joy of watching dance!