The return to dry land takes some getting used to because this absorbing and atmospheric two-act ballet sees theatregoers dive into the depths of a mesmerising tale following curious young mermaid Marilla. She lives in a mystical underwater world yet yearns to swim to the surface and experience the human realm. Surging waves of emotion crash over Marilla (and us!) as she falls hopelessly in love with a human prince, subsequently sacrificing her voice and life in the ocean for legs and an opportunity to be where the people are. 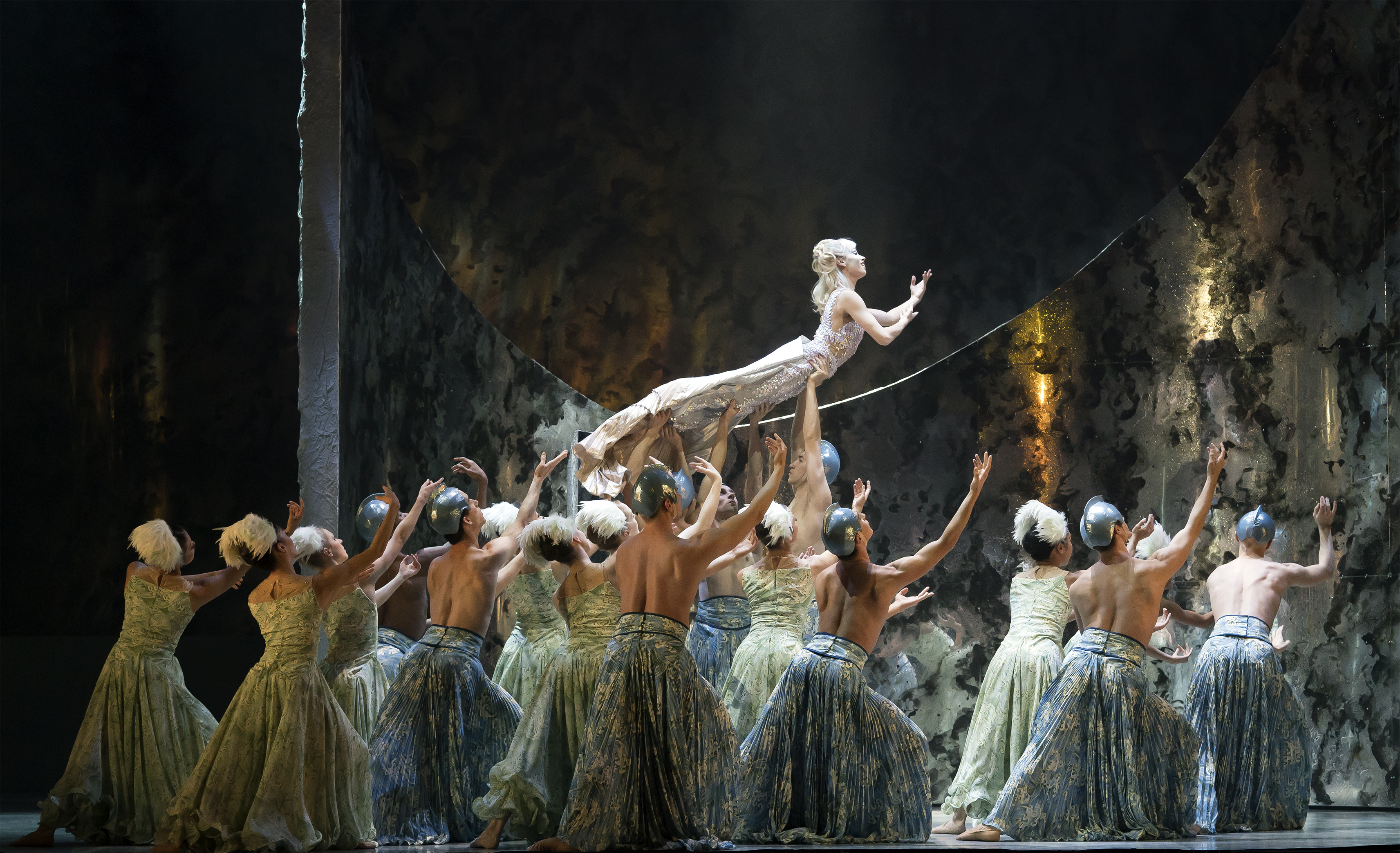 We are carried by a current of captivating choreography from the very beginning of the first act, when the curtain lifts to reveal Lyr, Lord of the Sea forcefully ruling his domain. The dancers themselves become the waves with simultaneous undulating movements generating the rise and fall of the tide. Their sinuous swooping arms, gracefully arched backs and effortlessly fluid transitions impressively reflect the endless ebb and flow of water. Once the aquatic ambience is established a trio of mermaids enter, buoyantly held aloft by the male waves.

Marilla is the youngest of three mermaid sisters. While older mermaids Evelina and Erina (soloist Ailen Ramos Betancourt and dancer Miki Akuta) swim off to explore nearer the surface, Marilla (soloist Abigail Prudames) is left behind with her best friend Dillion, the seahorse (soloist Kevin Poeung). Marilla dreams of the world above the waves and becomes enchanted by a picture of a human prince inside a locket that her sisters find on one of their treasure hunts.

When Lyr (junior soloist Matthew Topliss) creates a powerful storm, Marilla rescues that same prince, Prince Adair (soloist Joseph Taylor) from a shipwreck. Besotted, the little mermaid begs Lyr to help her join the human community. He reluctantly gives in to her pleading and proffers a potion that will allow her to walk on land – at the cost of her fins and her voice. Alas, the loss of her voice means Prince Adair does not recognise Marilla as his saviour and he mistakenly believes Princess Dana (leading soloist Dreda Blow) rescued him from the stormy sea.

What follows is a lesson in unrequited love and the greatest sacrifice for Marilla as she makes a devastating decision to ensure that Prince Adair lives happily ever after. 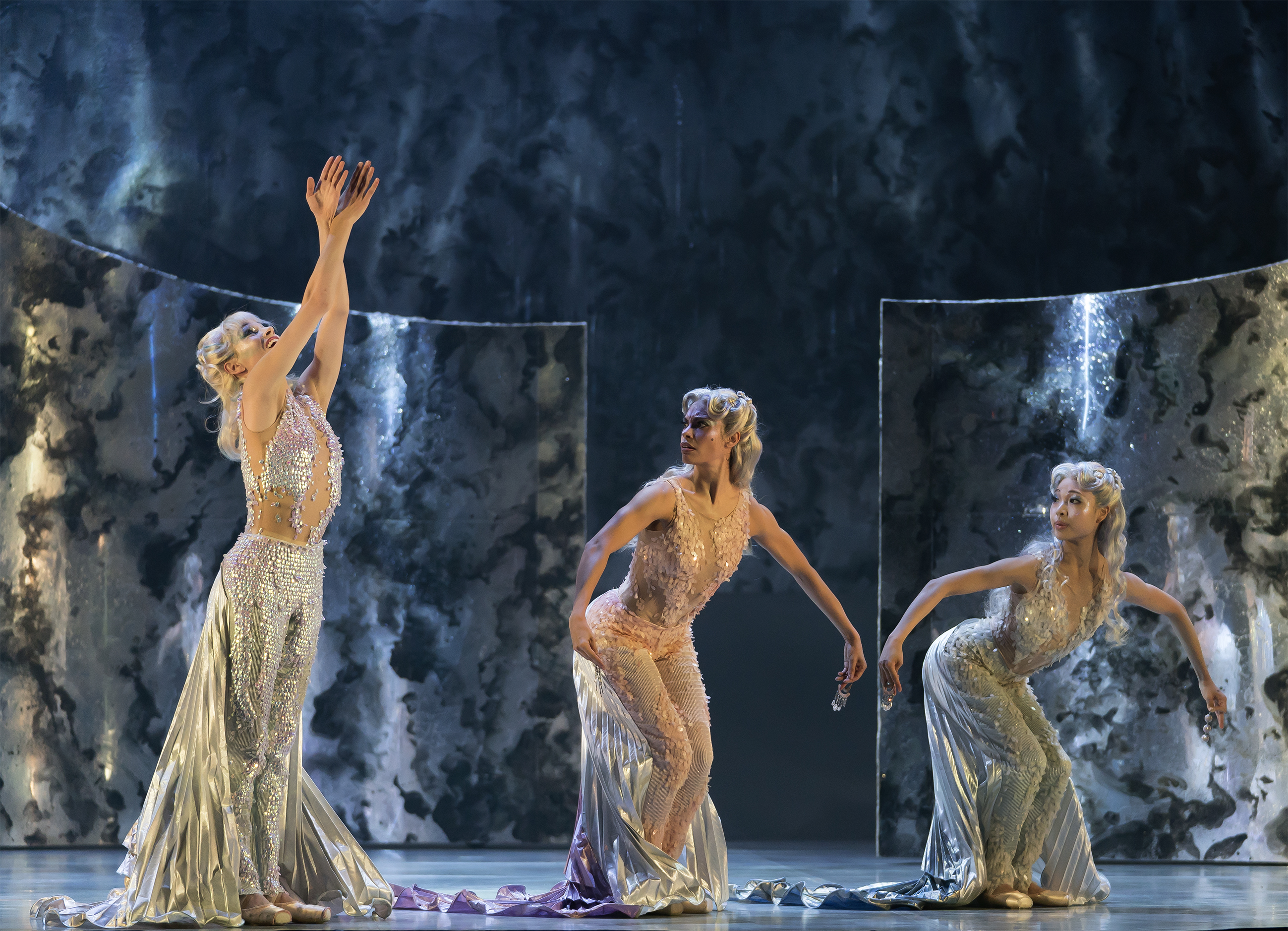 Abigail Prudames is exquisite in the title role, which was created on her by Nixon. Engaging and expressive, her face lights up with exuberance while cavorting under the sea and with childlike wonder while mingling with the humans. Constantly moving, whether inquisitively inclining her head or fervently fluttering her fingers, Prudames endearingly captures the rippling fluidity and otherworldly quality that the role of a mermaid demands.

Despite the limitations that a mermaid tail might be expected to bring to dancing, clever costume design and expertly embodied choreography ensures Marilla and her sisters look the part without being monotonous movement-wise. The iridescent tails attach to the outer seam of sequinned trousers, fanning out to appear whole but remaining mobile enough to afford the dancers some freedom to actually dance.

When Marilla undergoes her marine metamorphosis, from mermaid to two-legged being, we feel her pain. Prudames articulates Marilla’s agony in every flicker of movement as she laments the loss of her voice and warily tests her new legs in a writhing, floor-based solo. On dry land, Marilla really is a fish out of water. She is an oddity in the human world; unable to communicate and suffering with every faltering step she takes.

Stand-out scenes include the harrowing shipwreck (a tsunami of whirling dancers, calmed only by Marilla’s realisation that the drowning Prince Adair is the man from the locket) and the pas de deux that makes time stand still as Marilla envisages her longed-for romance with Prince Adair finally blossoming. 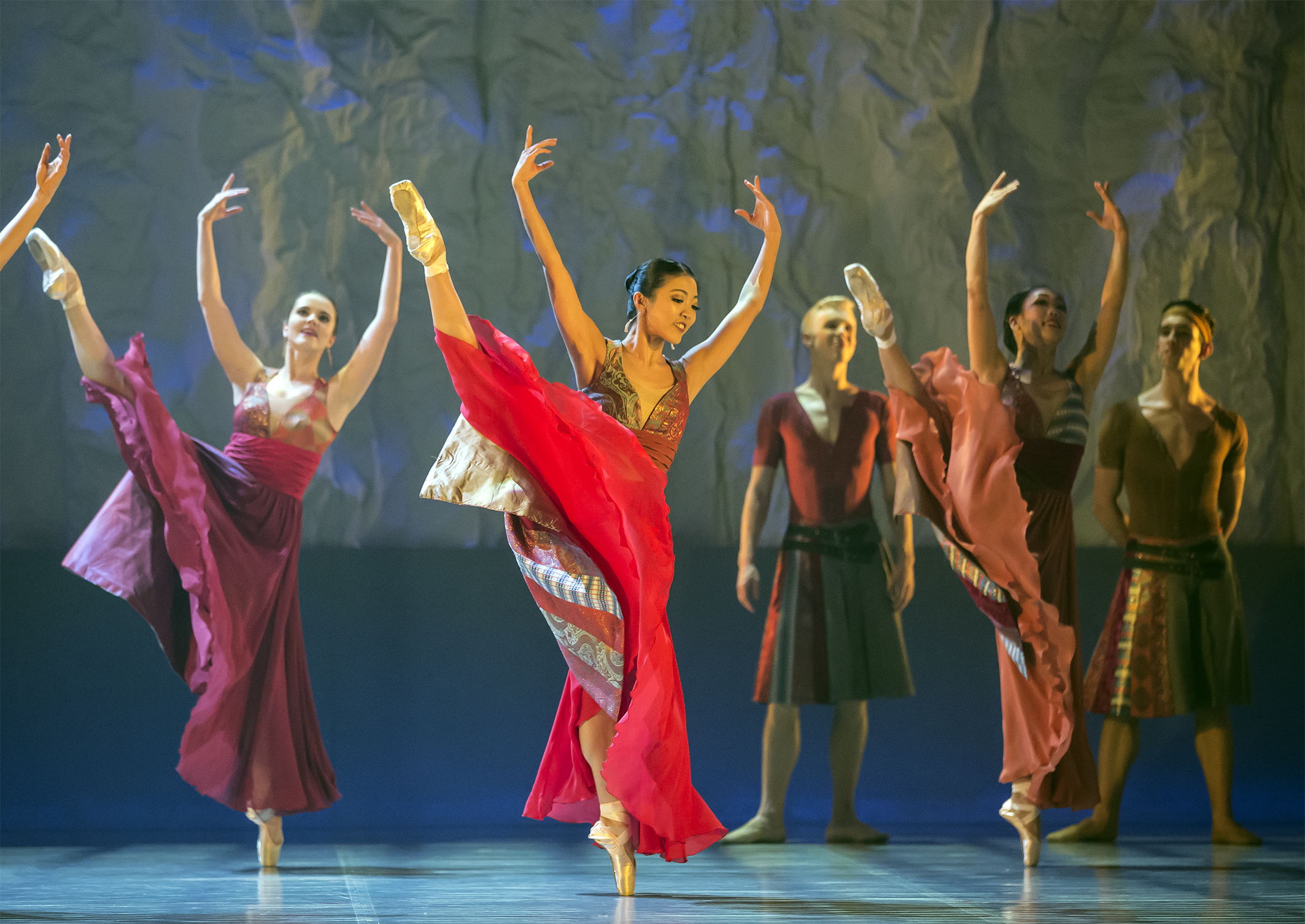 Composer Sally Beamish is responsible for the specially-commissioned score. Interestingly, the Celtic undertones of her initial music ideas have influenced the whole ballet. The characters’ names have Celtic origins and pertinent meanings (for example, Marilla means “shining sea” and Dillion means “faithful”), and the costumes have a Celtic charm.

The magical underwater world is characterised by ethereal, flowing movement and a weightless freedom. As the mermaids are lifted overhead by the male dancers (cast as “water men”), we really do see these fascinating piscine creatures flip and dive amidst the waves. Costumes in shimmering emerald green, sparkling sea blue and pearlescent neutrals glimmer under the lights and the music has an eerie, almost wailing quality – accented by the pre-recorded folk vocals played when Marilla sings her lilting melodies.

In contrast, the human realm channels the solidity and safety of land. Here, more naturally stylised and grounded movement prevails, with bravura sailors in earthy-toned tunics, gambolling girls in pretty sundresses and flamboyant ladies in red. The music is livelier, with more of a tune, and a trumpet heralds Prince Adair’s entrances.

Kimie Nakano’s set designs are ingeniously simple but effective; two curved walls are moved around to transport us from the seabed, to Prince Adair’s ship, to the cliffs on the shore. Tim Mitchell’s lighting ensures the stage goes from being flooded in water to bathed in light; seamlessly incorporating the elements of water, earth and sky that depict the two distinct worlds of the narrative. 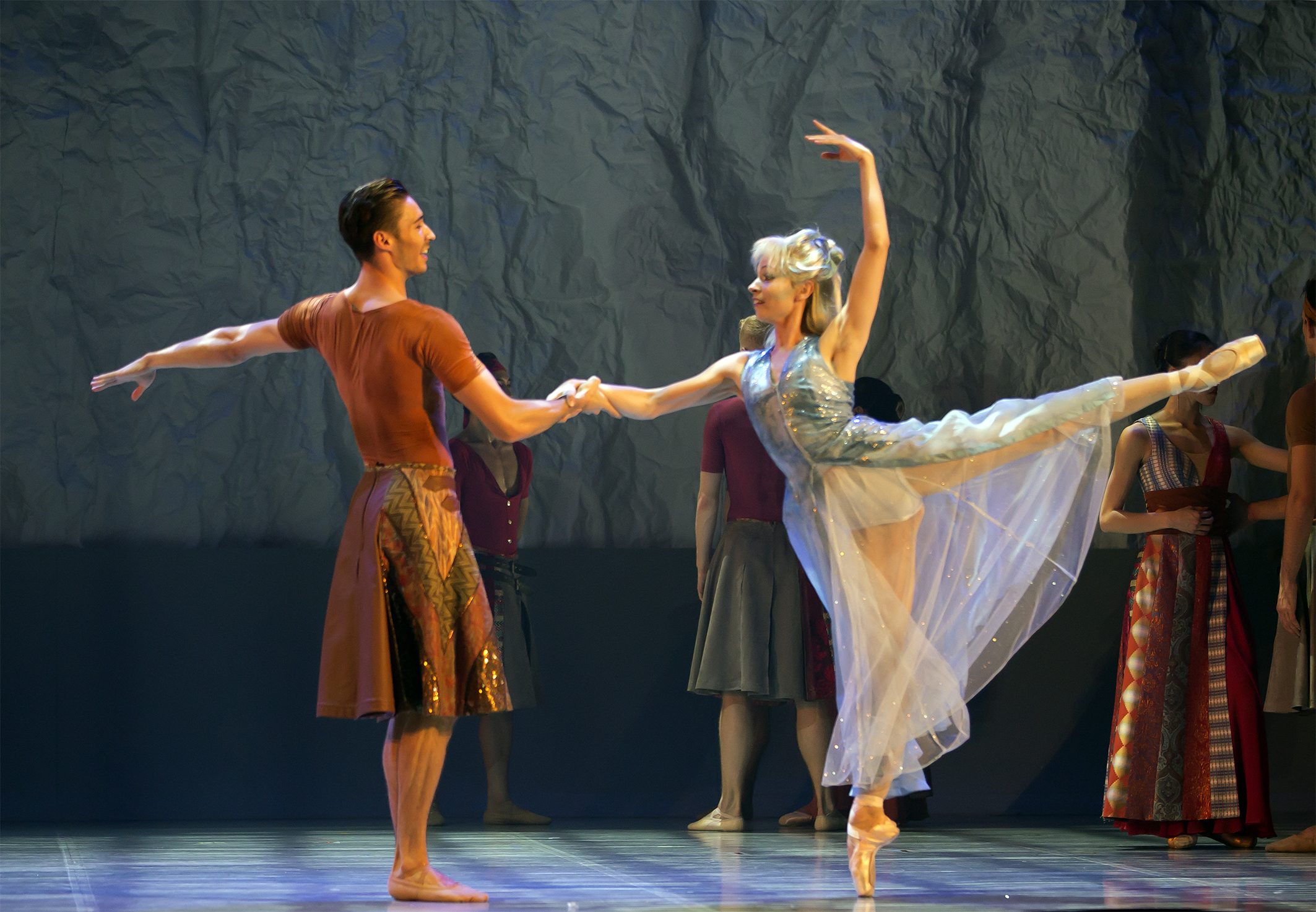 Both a fantastical tale about mermaids and a heart-breaking observation of the struggle to understand and communicate with those who are different, Northern Ballet’s The Little Mermaid ultimately reminds us of the power of love. It is visually spectacular, family-friendly and full of beautiful dancing.

I was hooked. In fact, I’ve decided that I’m not for this world. I’m off to be a mermaid!

Read my interview with Abigail Prudames, the dancer behind the title role in Northern Ballet’s The Little Mermaid.