Despite being created in 1974, the three-act tragedy remains a paragon of adult, dramatic dance. Inspired by Abbé Prévost’s notorious 1731 French novel Manon Lescaut and danced to the music of Jules Massenet, MacMillan’s Manon is a balletic interpretation of one of the earliest imaginings of a femme fatale. The choreography boasts substantial principal roles, bustling crowd scenes and enthralling pas de deux highlights. It pushes the boundaries of what ballet is, and should be, to unashamedly explore the darker side of the human condition. 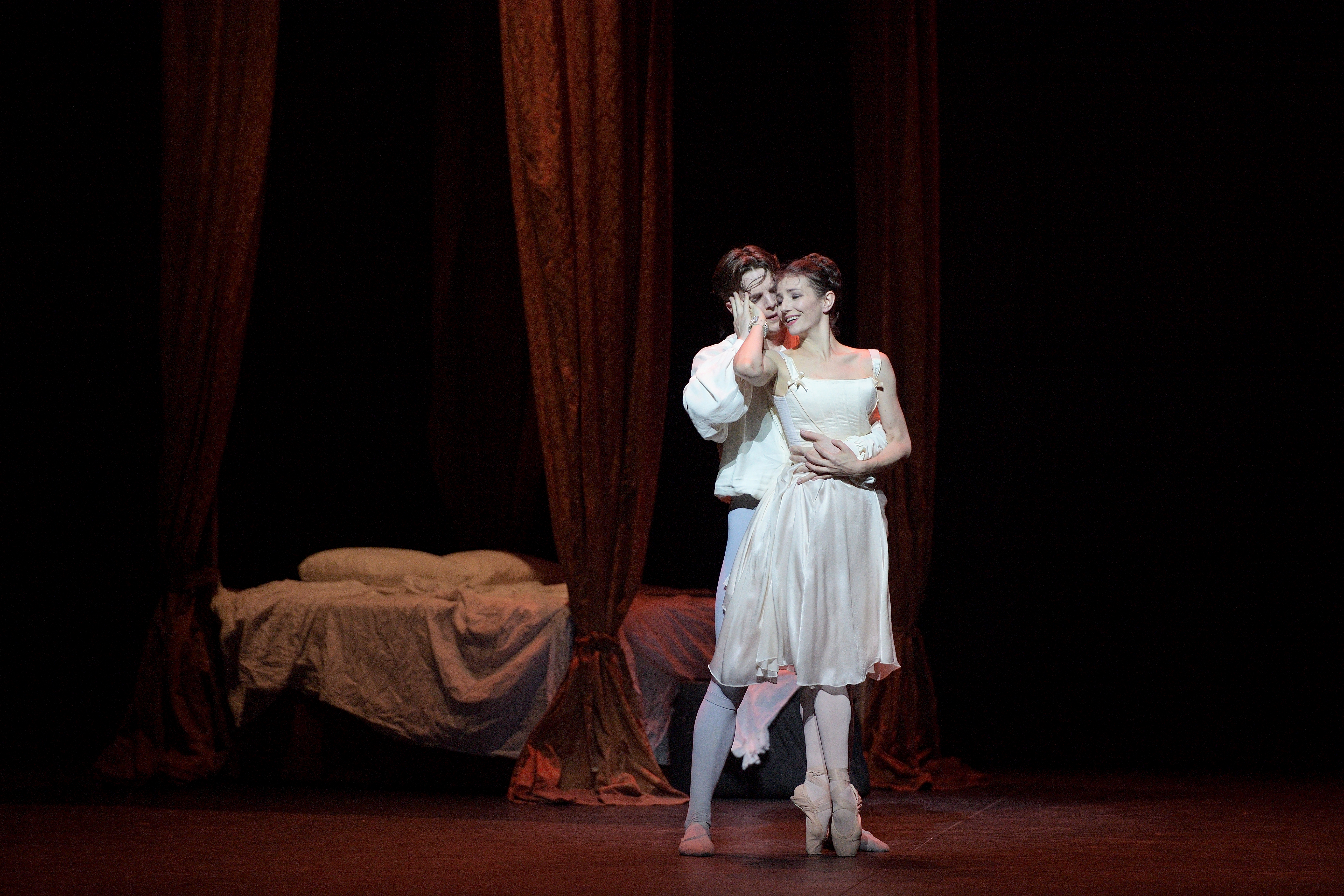 Manon is a steamy, grown-up story of sex, money and ill-fated love set in eighteenth century Paris. The plot follows the exploits of the young and naïve title character, who finds herself torn between innocent authentic love with penniless student Des Grieux and a life of luxury as a trophy mistress to wealthy older man Monsieur GM.

Desperate to escape poverty yet longing to be truly loved, Manon herself is a woman of contradictions. She is a victim of male desire but wily enough to exploit her allure so that she can manipulate the men around her. She surrenders to the act of selling herself but resolutely refuses to be entirely bought. She longs for idealistic, passionate love but is easily lured away by the promise of financial security, no matter how corrupt it may be.

The dual nature of our heroine – her capricious personality – makes us question to what extent she is swept along by events and wonder how much of her anguish she brings upon herself. Manon meets Des Grieux as she is about to enter a convent and they fall in love. When her enchanting presence captures the attention of onlookers, they mistake her for a courtesan. Her unscrupulous brother, Lescaut, is only too happy to begin bargaining with an old man who is interested in her, but Manon flees with Des Grieux. Manon’s story subsequently unfolds in between passionate pas de deux passages. Pursued by Lescaut and the rich but repulsive Monsieur GM, the original Material Girl is embroiled in gambling, theft and prostitution before being exiled to Louisiana where she succumbs to her final fall from grace. 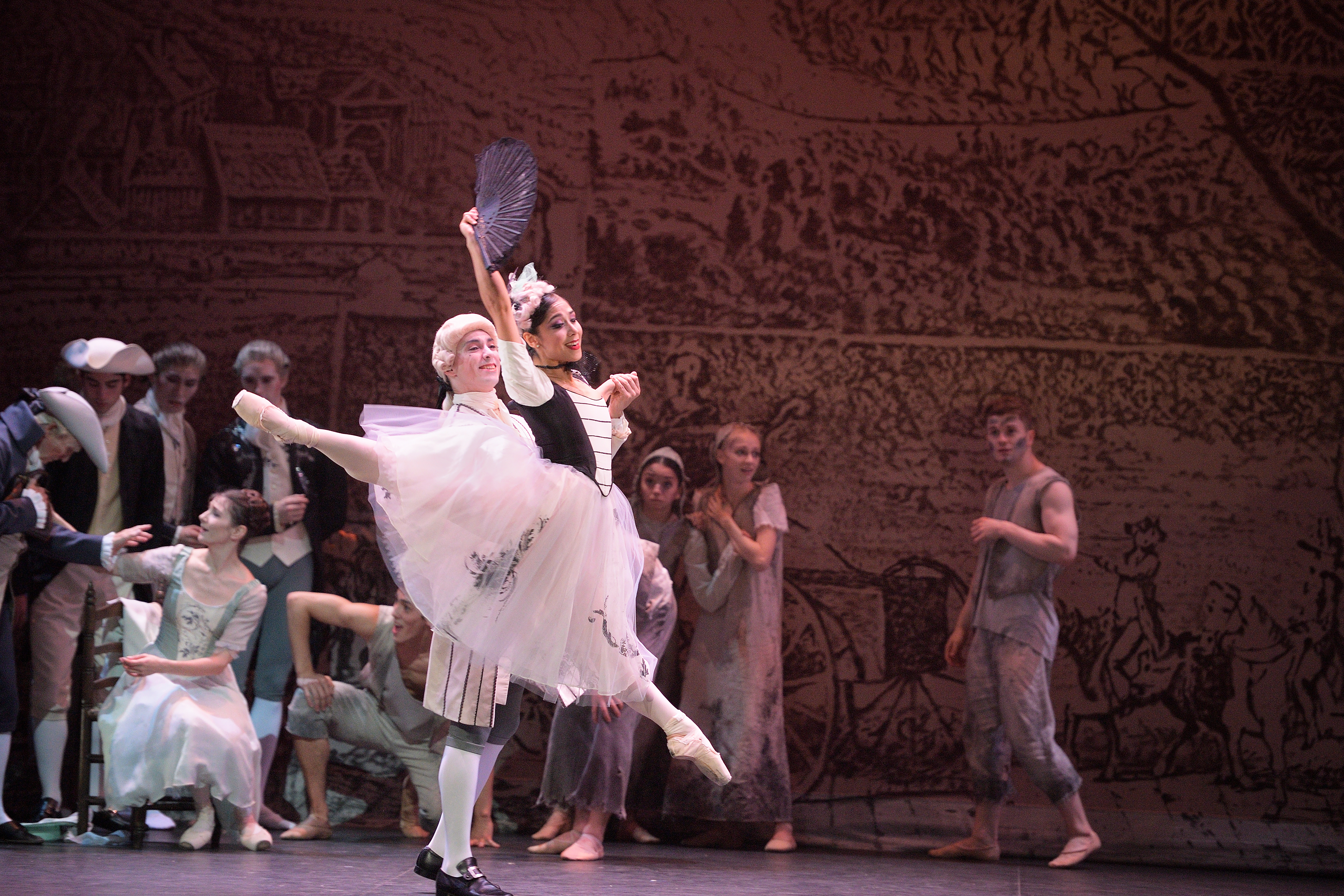 English National Ballet lead principal Jurgita Dronina is a gutsy and breathtakingly believable Manon. She captures all the charm of the wide-eyed innocent on her way to the convent, and then effortlessly embraces the melodrama when greed and love thrust the good girl over to the dark side. Significantly, she retains just enough vulnerability to ensure that we keep rooting for Manon until the heart-breaking final scene.

Handsome young scholar Des Grieux woos Manon outside a busy inn with a lyrical solo, before sweeping her off her feet during their first thrilling pas de deux. His refined, relatively reserved adagio solo is notoriously difficult as it is full of tricky turns and everlasting balances, all directed towards Manon as he opens his heart to her. 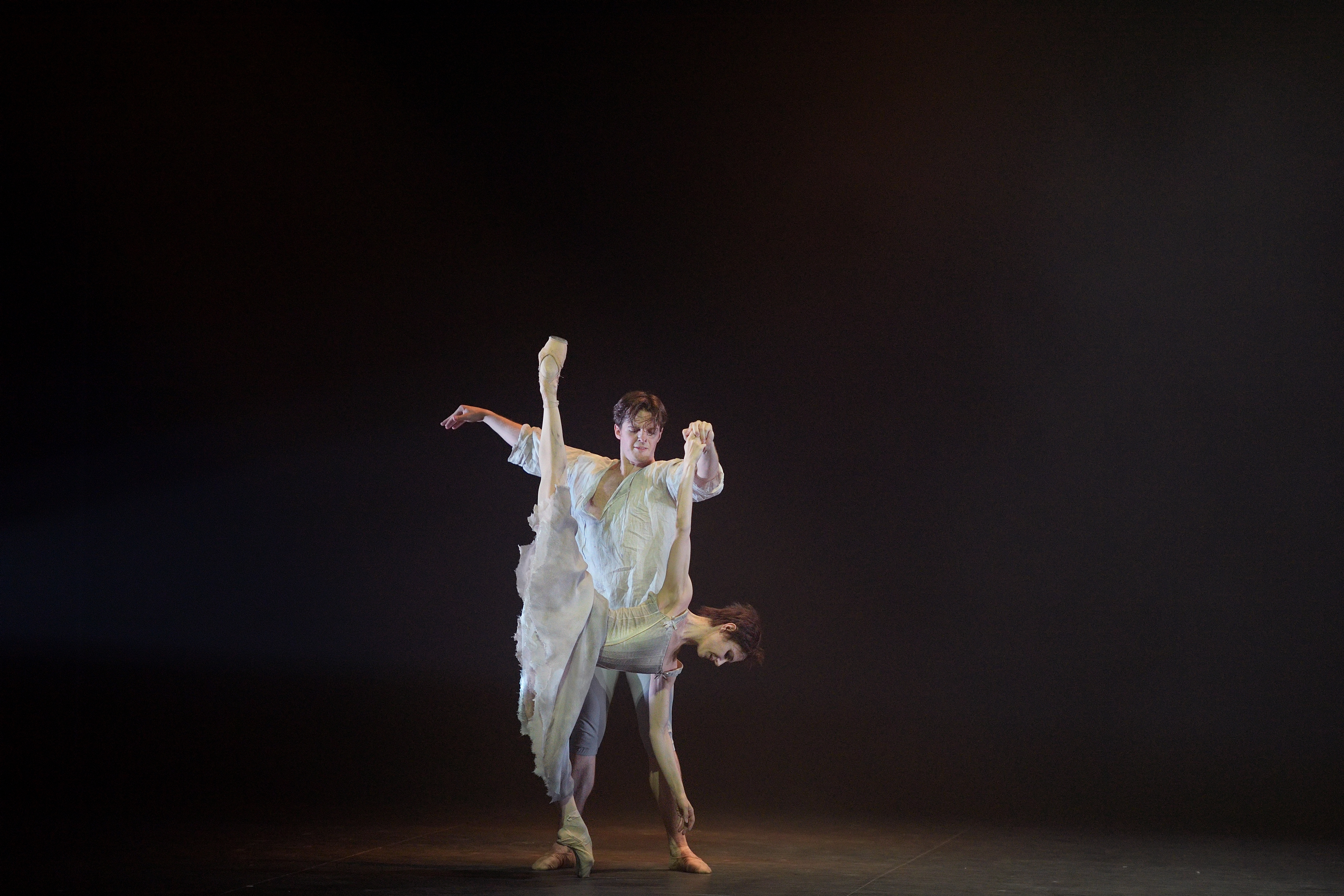 Lead principal Isaac Hernández accomplishes the technical feats with assurance and his performance is sincere throughout. Together with Dronina, he makes his character believable and they ensure we are entranced by the story. Manon falls for Des Grieux, hard, and we can see that she continues to love him even though the allure of affluence causes her to act amorally. By the end of the ballet’s final poignant pas de deux, when she lies limp and lifeless in his arms, the authenticity of their love really does feel irrefutable.

The other men involved in Manon’s turbulent trajectory treat her as someone to be used and abused. When both the rich but repulsive Monsieur GM and Manon’s manipulative brother Lescaut dance with her in duets or pas de trois arrangements, they brush her aside as quickly as they show an interest in her and pass her around as if she is little more than an object. First soloist Fabian Reimair is appropriately abhorrent as Monsieur GM. Obnoxious, cold and determined to buy his way to happiness, he loftily tempts Dronina’s Manon with sparkling diamonds and plush furs. Also determined to turn events to his advantage is Lescaut, danced with magnificent menace by soloist Ken Saruhashi. 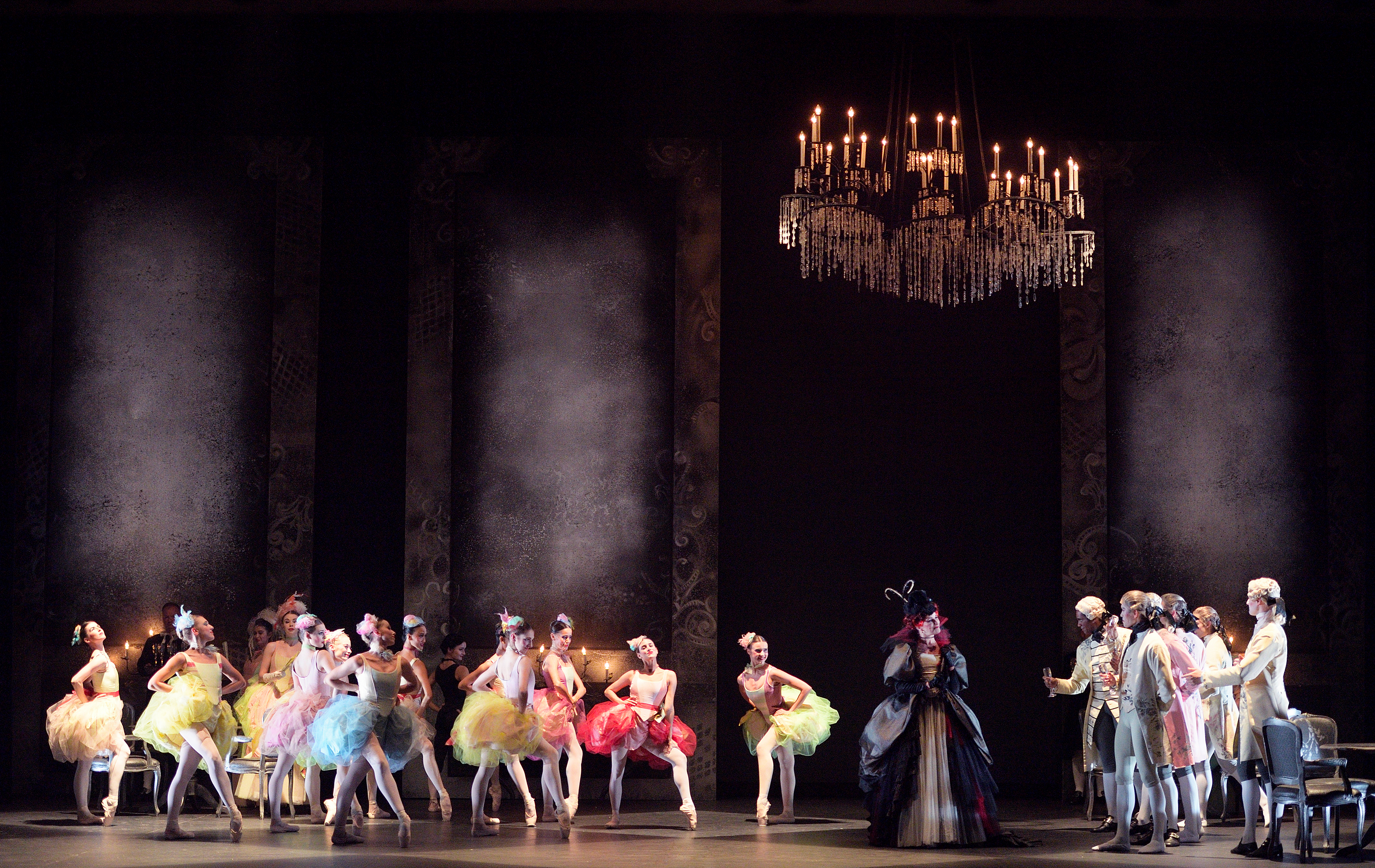 During lavish party scenes, where flouncy call girls vie for the attention of the richest men, we find ourselves drawn to Lescaut’s mistress, Manon and a courtesan who is dressed as a boy (she is a more expensive option for the wealthiest clients). Elaborate, post-renaissance costumes emphasise the differences between the lower and upper echelons of society and the ballet’s themes of love, lust, greed and social inequality are adroitly expressed through the choreography.

I was seduced by Manon and the scintillating storytelling had theatregoers around me enraptured too. English National Ballet is certainly making a habit of bringing atypical ballets to regional venues – long may it continue! 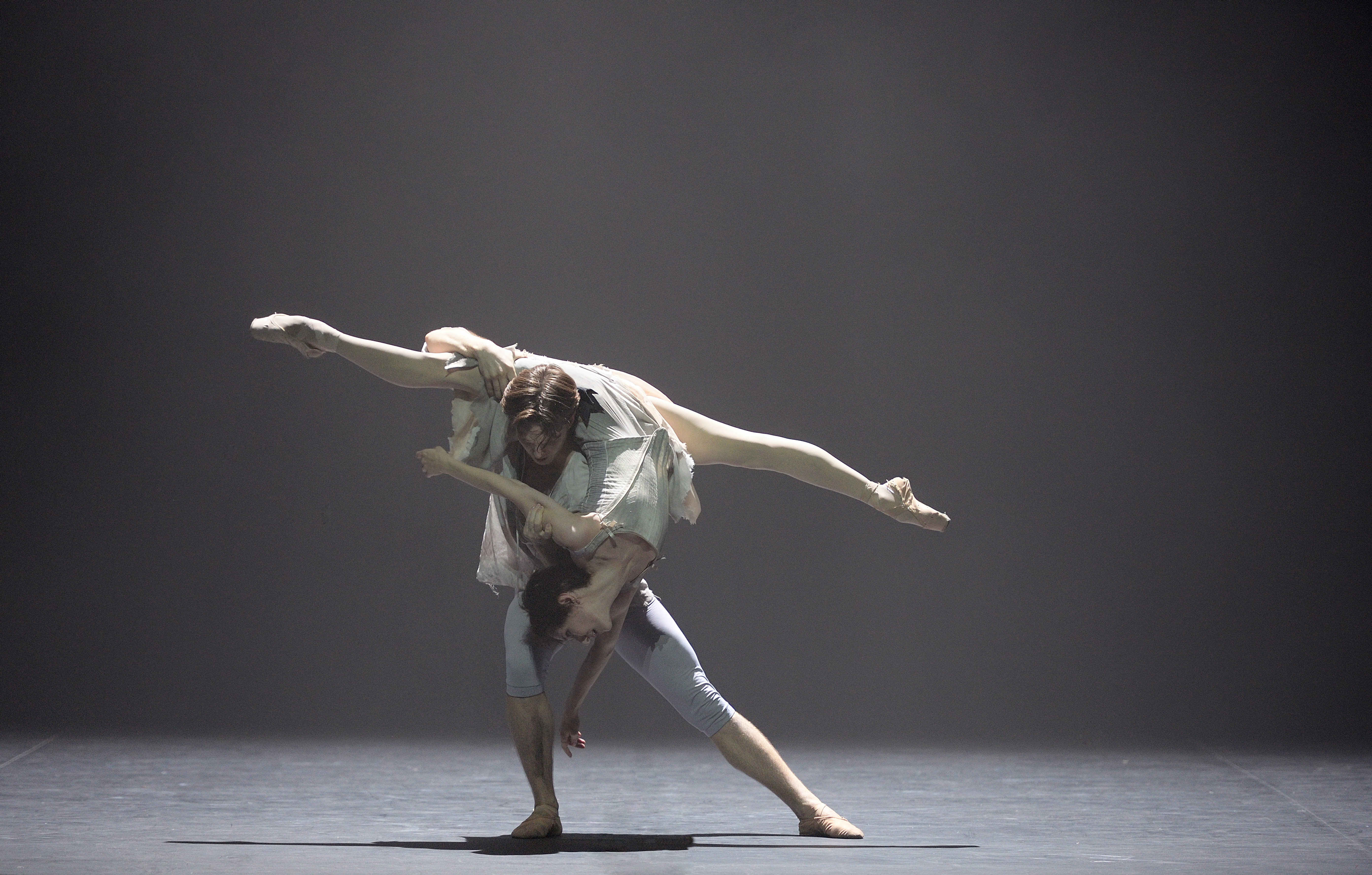 The cast reviewed danced at Milton Keynes Theatre on Wednesday 24 and Saturday 27 October at 7.30pm.

This cast will dance at Mayflower Theatre, Southampton on Saturday 3 November at 2.30pm (although casting is always subject to change).