Within the Golden Hour

Within the Golden Hour is a shimmering spectacle of neoclassical abstraction. Seemingly set during the hazy period just before sunset, this wistful ballet moves fluidly between a series of distinctive duets and effective ensemble sections.

Wheeldon’s choreography is pretty and playful. Throughout this joyous piece, he reimagines classical ballet steps with striking contemporary influences and undertones of ballroom dancing. The sparkling movement is an exquisite, poetic response to the easy-on-the-ear soundscape. It’s an original orchestral score composed by Ezio Bosso and featuring music by Antonio Vivaldi.

A total of fourteen dancers are costumed in gently glimmering designs by Jasper Conran and illuminated by Peter Mumford’s gorgeous warm lighting.

At the beginning of Within the Golden Hour, all the dancers fan out across the stage to produce intricate patterns and groupings that display the pure beauty of movement. Graceful lifts, airy jumps, elaborate turns. The gathering feels like a divine celebration.

A few further dazzling displays later, and all fourteen artists return to dance us into darkness. As the curtain lowers, their perpetual motion leaves us wanting more.

Medusa is a bold narrative ballet about injustice and the abuse of power. It is a highly-stylised interpretation of the Greek myth, set to orchestral vocal compositions by Henry Purcell and electronic music by Olga Wojciechowska.

Priestess Medusa is a beautiful young maiden who serves at the temple of virgin goddess Athena. One day, when Medusa is worshipping at the temple alone, sea god Poseidon forces himself upon her. This incurs the wrath of Athena for desecrating the temple.

Unable to punish the rapist because he is a god, Athena directs her fury against the human victim and turns Medusa into a hideous monster. Medusa’s hair is transformed into writhing snakes and she is cursed with a petrifying power: anyone who meets her gaze will turn to stone.

Cherkaoui construes Medusa’s metamorphosis into a monster as an act of both punishment and empowerment. Yes, Medusa loses her beauty and her place at the temple. But what Athena ultimately attributes to Medusa is power. Power over Poseidon and all men who may cross her.

The title role was created on Russian ballerina Natalia Osipova and there is no doubt that she is a powerful principal. As Medusa the priestess, Osipova is fragile. As Medusa the monster, Osipova is fierce. As a dancer, Osipova is fearless – she commits body and soul to the choreography and character. She is expressive and overflowing with emotion.

Unfortunately, at times, the storytelling in this ballet seems to fade, and all that emotion almost falls flat. Cherkaoui combines a stately, unhurried, narrative pace with the two contrasting musical styles to give his Medusa an otherworldly quality. This is befitting of a myth but perhaps means some of the drama blurs so much that its significance wanes.

Choreographically, Cherkaoui uses tasteful movement and clever counterbalances to elegantly convey distress during the pas de deux when Poseidon rapes Medusa. Later, serpentine references (including swivelling wrists, thrashing arms and lethal long legs assertively unfurling) give Medusa an unmistakable sensuousness and aggression. It is all very artistic, and the story is communicated, but it sometimes feels a bit like the narrative thread is slithering away.

Fortunately, Osipova is such an intense and captivating performer that she can carry the ballet – while carrying off something of a bad hair day. What should be a head of writhing, hissing snakes looks more like a helmet covered in pipe-cleaners. Still, even wearing this interesting headpiece, Osipova’s technique and presence is enough to have you sat, still as a stone statue, on the edge of your seat and gazing at her in admiration.

Alongside outstanding Osipova, Olivia Cowley is alluring and full of cool authority as virgin goddess Athena. Likewise, Ryoichi Hirano is muscular and menacing as Poseidon.

At times, Medusa is slightly unsettling; the ending left me wondering whether the title character is asking us to forgive her monstrosities or seek further revenge on her behalf. Still, overall, Medusa is a thoughtful, aesthetic and compelling ballet that incorporates a fresh movement style.

Medusa contains moderate, stylised physical threat and discreet sex references. It is not generally suitable for children under the age of twelve.

Pite describes this poignant and passionate piece as her response to the refugee crisis. It is her way of making sense of the everyday mass exodus of people.

She compellingly captures the plight of refugees and the displacement of communities by having thirty-six dancers move in impersonal unison. This distressing collective of shaking, swaying, staggering bodies creates an overwhelming sense of immense scale on the Royal Opera House stage.

Pain and unhappiness ripples through the crowd as three rows of dancers navigate their way through semi-darkness, despondently traipsing into the unknown. Later, an anguished pas de deux focuses our attention on the intense emotions of two grief-stricken individuals. 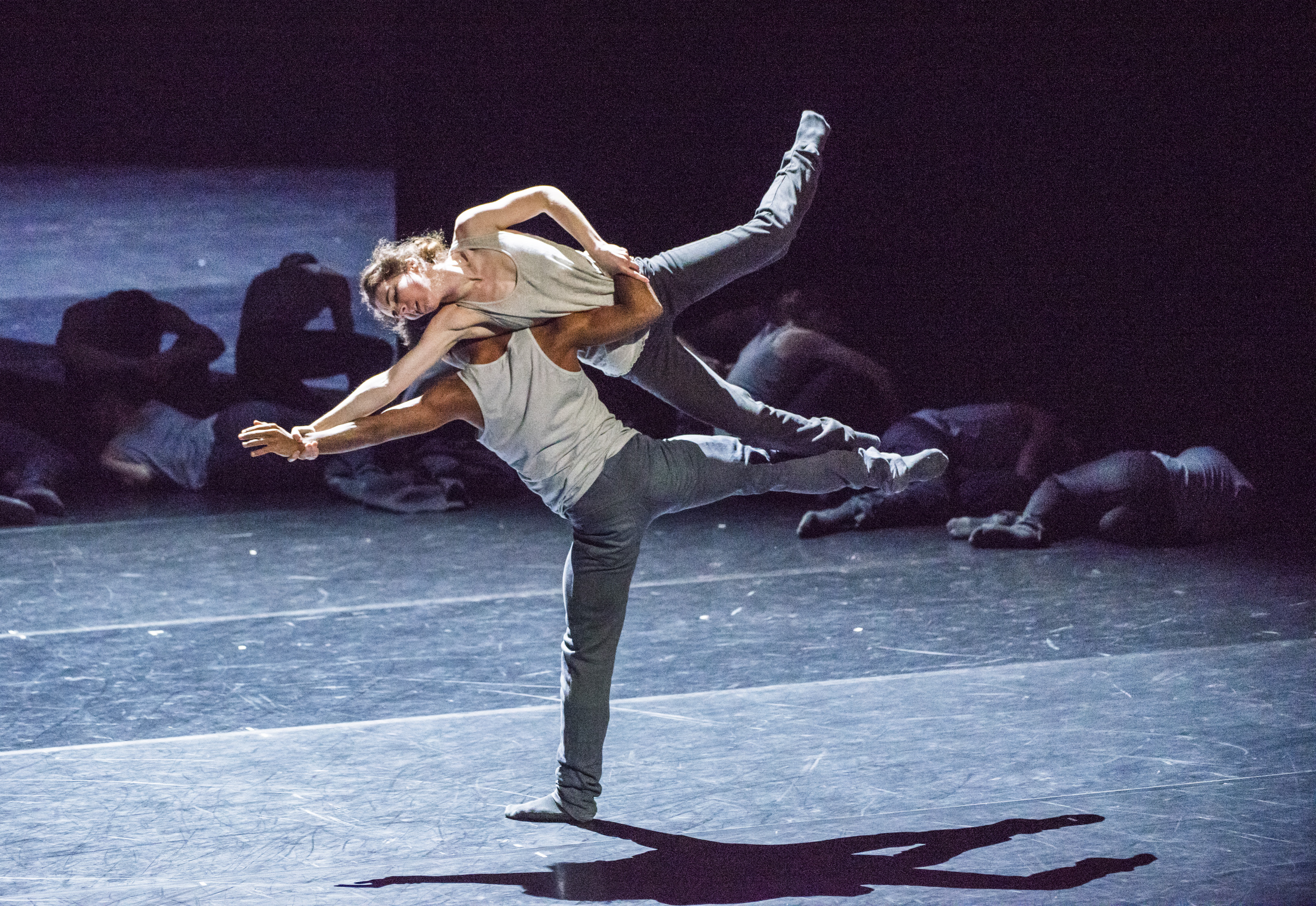 Flight Pattern is beautiful and sad. It is art at its most human. It implores us to never lose our compassion, whatever the conflict. The sheer scale of the work – the patterns and use of space – is probably best appreciated viewed from a seat in the Royal Opera House but the cinema screening grants us the best seats in the house for detecting detail (including facial expressions).

The choreography comprises grounded, emotionally-driven movement. This is contemporary dance with neoclassical influences, not ballet as we know it. Watching, we are engulfed with feelings of crushing confusion and extreme exhaustion. We witness restlessness, trepidation, sadness and regret as the bodies onstage are funnelled through a bleak state of limbo into an uncertain future.

Pite enables us to directly connect with just one personal story: the story of a mother’s loss. The dancers are all costumed in drab grey trousers, vests and coats. One by one, they remove their coats, handing them to a lone female dancer (the remarkable dance-actress Kristen McNally) who collapses under the weight of them.

In a heartrending passage, the distraught McNally cradles her own coat as if it is a baby. She dances a tormented solo and a male dancer (Marcelino Sambé) tries to comfort her but is overcome with his own heartache. Their silent suffering is deafening.

A recording of the live Medusa mixed bill will be screened in selected cinemas until Sunday 11 August 2019.

The Live Cinema Season continues with Romeo and Juliet on Tuesday 11 June 2019.