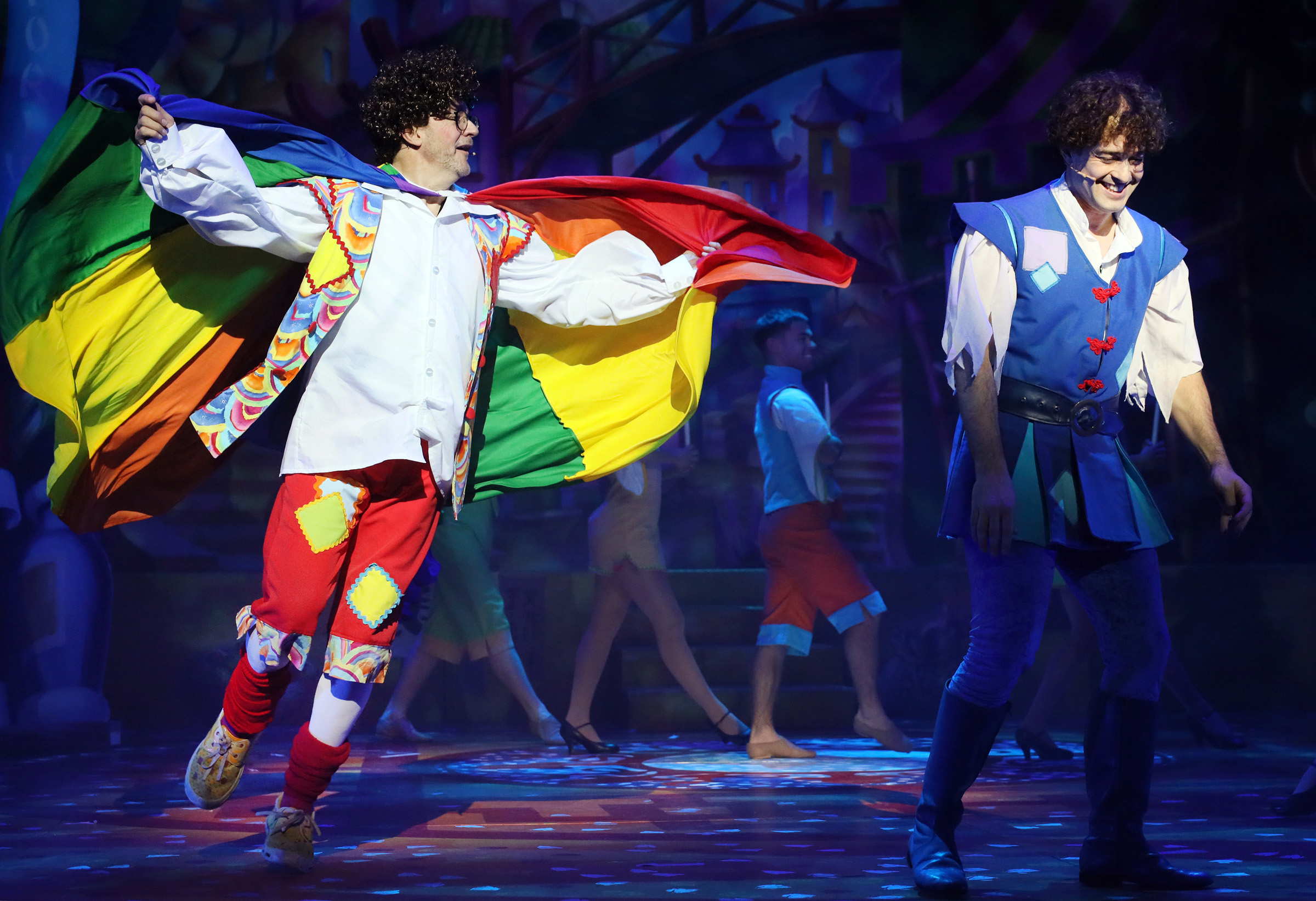 This is not the first time that Aladdin has hopped aboard the flying carpet at Milton Keynes Theatre. We’ve been treated to various Aladdin pantomimes in previous years, including interpretations in 2007, 2011 and 2015.

The production that has landed this year has a strange, very static and slightly disappointing Genie – he is fixed to a pole and has some lip-synching difficulties. Still, the show does feature a Slave of the Ring called Scheherazade (hilariously referred to as “Shirley” by Joe Pasquale’s flummoxed Wishee Washee). This guardian angel character, whose name derives from the narrator of the tales of The One Thousand and One Nights (Aladdin was one of these thrilling tales), is portrayed by Sarah Earnshaw with serene professionalism. When summoned, she sashays out from a puff of smoke, speaks eloquently and sings splendidly.

Truth be told, the entire cast is in fine voice and determined to entertain. Consequently, superb singing shares the stage with supreme silliness.

Lee sings ‘Any Dream Will Do’ from Andrew Lloyd Webber’s Joseph and the Amazing Technicolour Dreamcoat and somehow keeps going despite Joe Pasquale racing around him in a curly wig and imitation rainbow cloak.

Later, Tegan Bannister (who wowed us as Éponine in Les Misérables earlier this year) joins Lee for a heartfelt duet between Princess Jasmine and Aladdin. Their romantic rendition of Ed Sheeran’s ‘Thinking Out Loud’ hits all the right notes – even when pandemonium unfolds thanks to the unexpected arrival of some affectionate pandas! 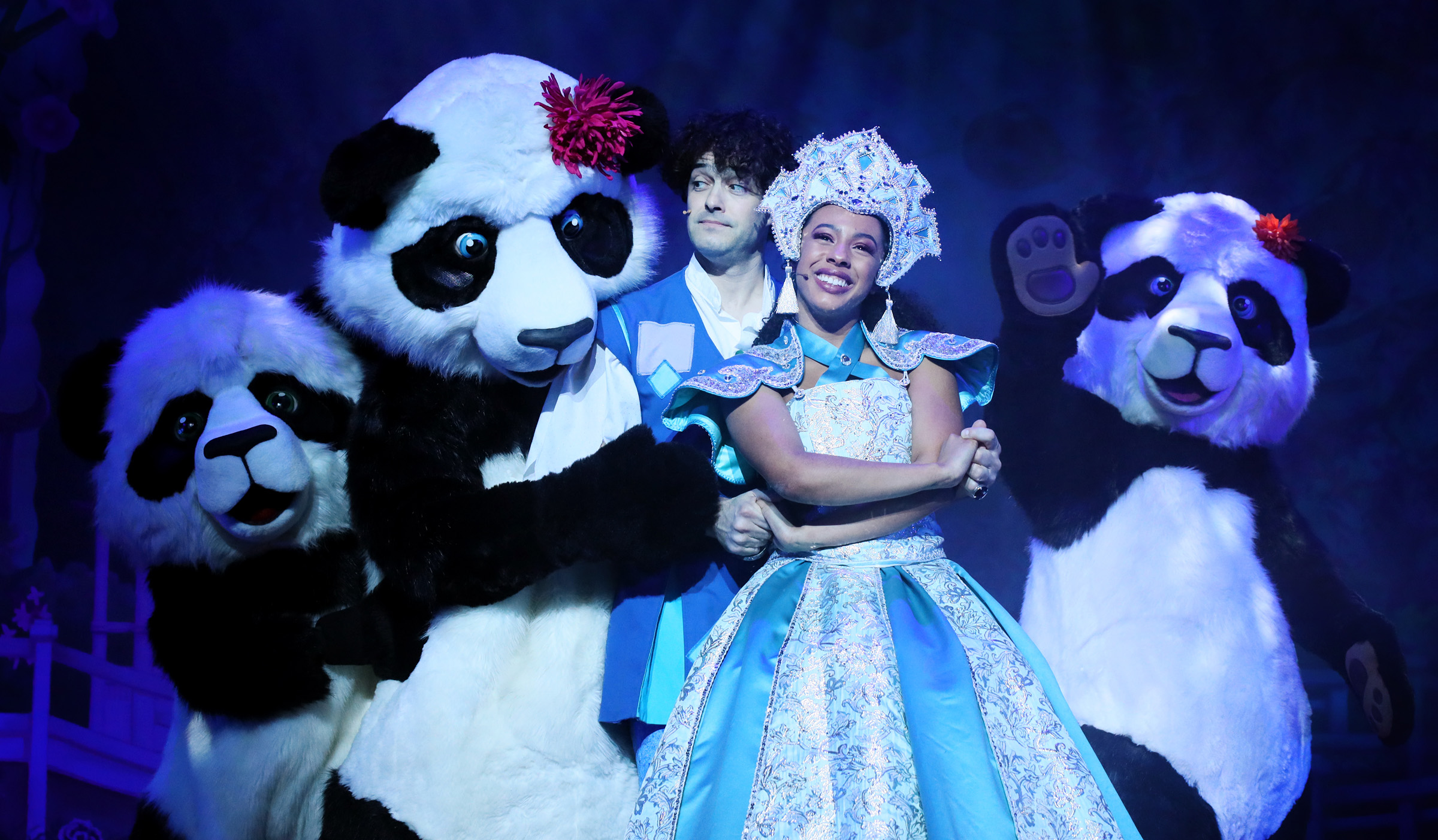 As Princess Jasmine, Tegan harmonises beautifully with her Aladdin, and looks very pretty in her sparkly dress, but it is not until after the interval that she really makes any impact. Just as I found myself mentally lamenting the lack of a female character to interest and inspire the girls in the audience, Princess Jasmine shrugged off her passive persona to boldly stand up for herself and her man.

At last, Tegan is given the chance to take centre stage and we see a glimmer of the rising musical theatre star who has also appeared as a commercial dancer with Dua Lipa. She joins the lively ensemble dancers for a combative, high-energy dance number containing some exuberant kicks, turns and jumps.

Someone who makes an impact from her very first entrance is the Dame of this panto, Widow Twankey (David Robbins). Each appearance Aladdin and Wishee Washee’s statuesque, laundry-washing mum makes features a more outrageous outfit than the last, always finished off with a matching wig.

The Empress (Debra Michaels) and Abanazar (Phil Corbitt) are forces to be reckoned with and add just the right touch of pretentious peril to proceedings. Both also offer comedic value when they are incorporated into scenes with Widow Twankey and Wishee Washee. Notable inane incidents include Wishee Washee being a go-between as Widow Twankey and Abanazar speak speedily on the scintillating subject of short-sleeved shirts, and the tomfoolery of the ‘If I Were Not [Upon The Stage] In Peking’ routine.

Marvellous mishaps abound. The magic carpet soars, swivels and somersaults. Joe Pasquale insults Lee Mead, calls Abanazar “Have a Banana” and rides a motorised toilet. With so much nonsense happening in the real world, Aladdin is 2 hours and 15 minutes of frenzied, family-friendly fun. 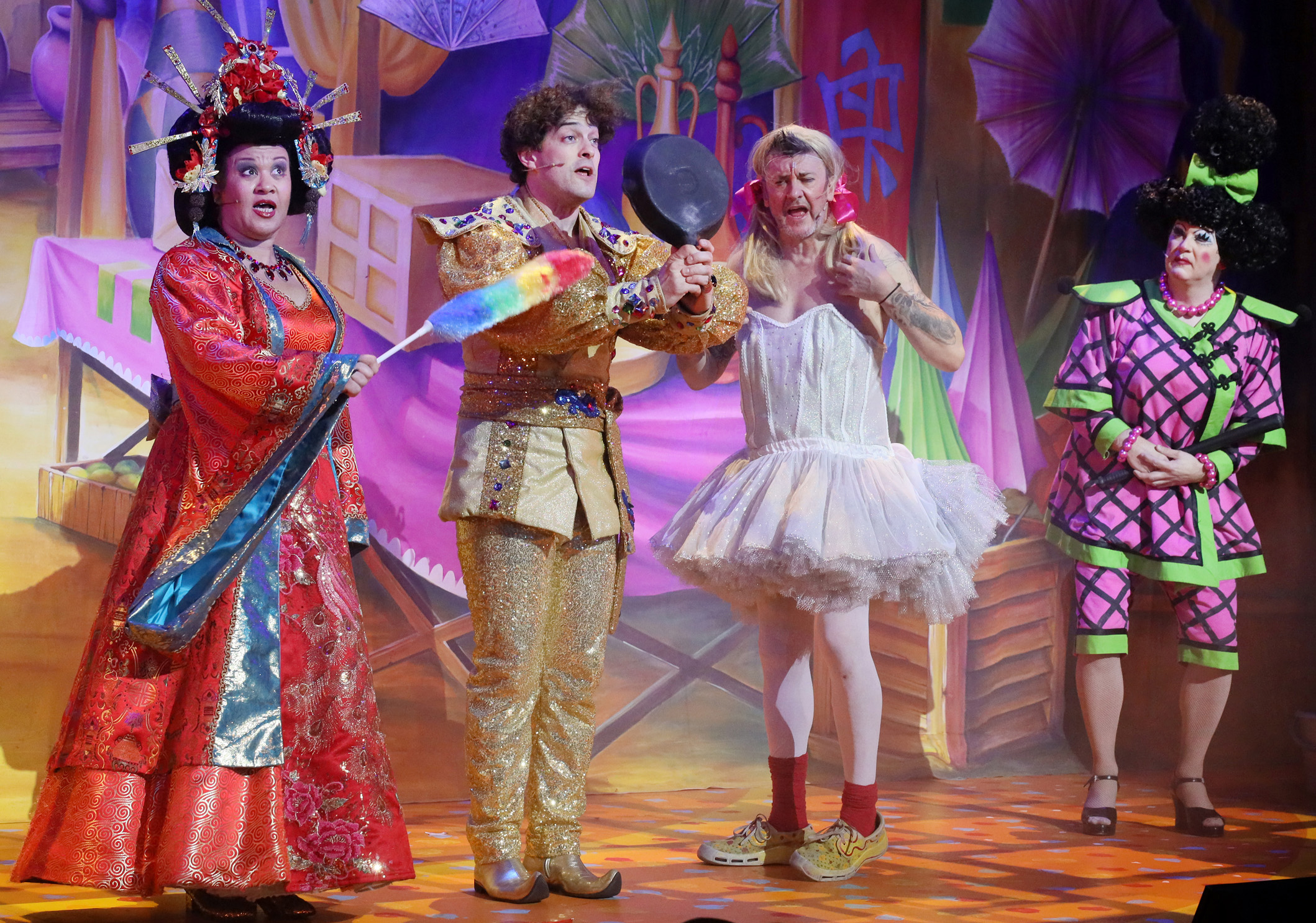 The year 2019 marked Milton Keynes Theatre’s 20th anniversary, which means the venue is celebrating 20 years of panto this Christmas.

I’ve grown up with pantomimes at Milton Keynes Theatre. My involvement in this quintessentially British blend of entertainment started when I was dancing on the stage. Then, after training as a journalist, trips to Pantoland came courtesy of opportunities to interview visiting celebrities about their seasonal shenanigans. These days, enjoying an evening of glitz and giggles and then writing up a review with gusto is a much-loved Christmas tradition.

Boasting acting, comedy, singing, dancing and spectacular special effects, the humble panto plays an important role in introducing families to the magic of theatre. And, by getting so many bums on seats, an annual pantomime generates a sizeable chunk of a theatre’s overall revenue – which gives venues more freedom to programme a wider selection of shows throughout the following year.

Thought about in this way, a trip to the panto does more than immerse you in a fabulous few hours of festive fun. It also helps support the arts during a time of declining public subsidy.

What are you waiting for? Get booking!

Read my interview with Wayne Sleep from when he performed at Milton Keynes Theatre in Aladdin, Christmas 2015.