Protagonist Jenna Hunterson is passionate about baking and dreams up a new pie for every occasion. Trapped in an abusive marriage and living the same day on repeat as a waitress at a diner in a small southern American town, she temporarily escapes by experimenting with pastry.

The therapeutic mixing, kneading, rolling, filling and crimping helps Jenna process her feelings. So, whenever she has too much on her plate, she invents pies inspired by her experiences and anxieties. This means that her fanciful menu features creations such as “My Husband’s A Jerk Chicken Pot Pie”, “Where There’s A Whisk There’s A Way Pie” and “Almost Makes You Believe Again Pie”.

Jenna was introduced to the magic of a well-made pie as a child. Her now dearly departed mother distracted her with sugar, butter and flour to shield her from unhappiness in the family home. Discovering she has her own bun in the oven, Jenna tentatively begins to admit that she has had enough of taking orders from her husband and wants a taste of something else.

With her self-esteem as flat as a pancake, she must look deep inside herself to find the courage to bake a better life. 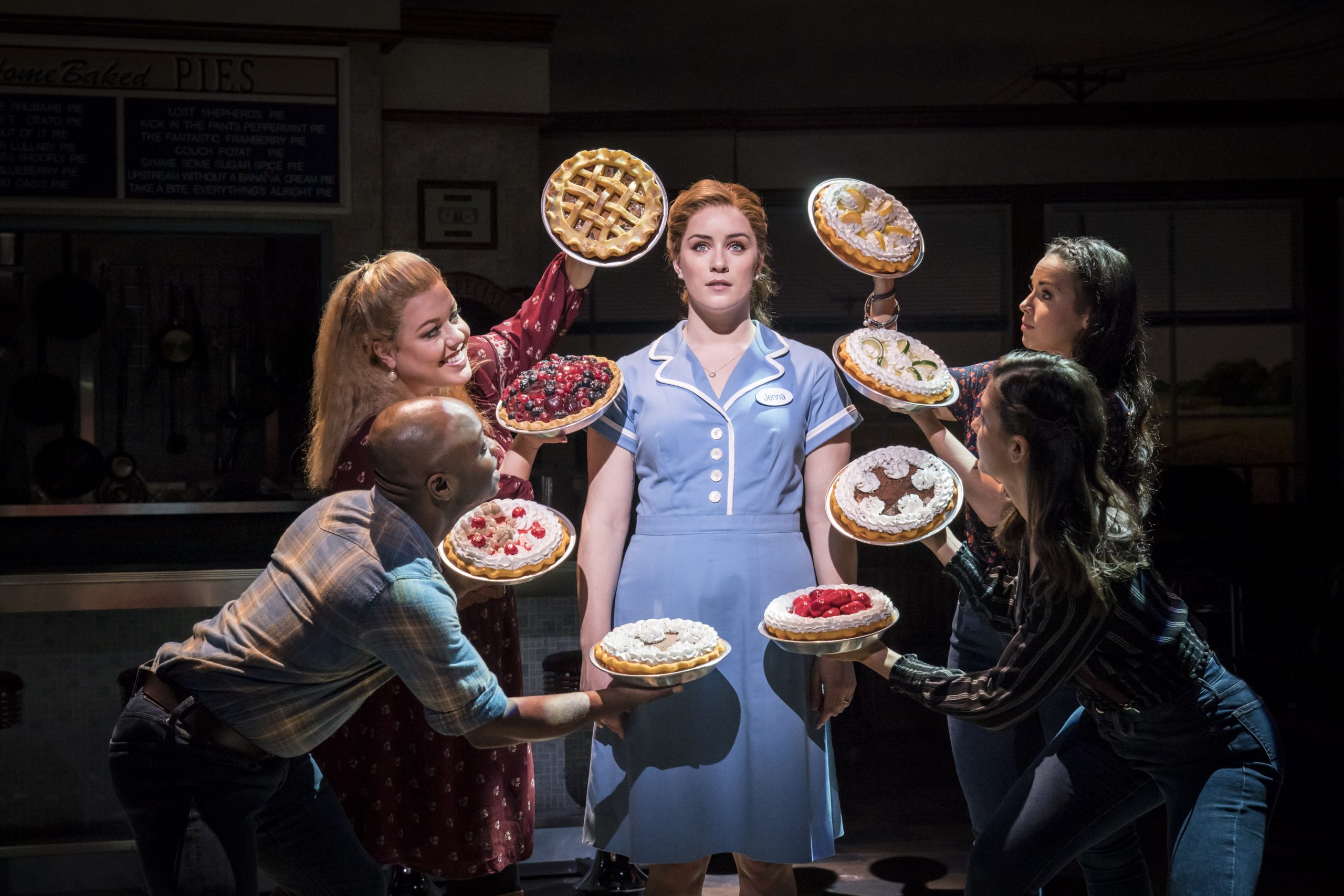 Waitress is based on a 2007 film by the late writer-director Adrienne Shelly and is the first musical in Broadway history to be written, composed, directed and choreographed by women. Adapted by writer Jessie Nelson, this life-affirming show is flavoured with delightful folk-pop music and expressive lyrics by singer-songwriter Sara Bareilles. It is slickly staged by director Diane Paulus and served with complementary movement by choreographer Lorin Latarro.

The opening words are “sugar, butter, flour”. These lingering lyrics are sung a cappella while Jenna (played by Lucie Jones) stands in a spotlight, baking. With a pinch of this and a dash of that, she whisks ingredients together and whips up her delicious desert as if she is casting a spell. The scene is set for a warm, whimsical tale of pie making and self-discovery.

Jenna’s unplanned and unwanted pregnancy is confirmed at the beginning of the show. Peeing on a stick and joining Club Knocked Up is the catalyst for her to use the adventurous approach she adopts when baking to pursue her personal recipe for happiness. She has an affair with her dorky-but-dishy doctor (he is “off sugar” when they meet, but she soon rectifies that), decides to enter a pie-making contest and allows herself to believe in the fresh start she so desperately needs.

Lucie Jones (The X Factor, Les Misérables, Legally Blonde) is instantly endearing as kind-hearted Jenna. Her portrayal of a woman who is painfully indecisive and insecure, yet increasingly determined to live her life on her own terms, is convincing and relatable. She conveys sweet memories, as well as the odd tart-tongued remark, with a natural ease. And her soaring vocals are outstanding.

Despite their morally dubious relationship (they are both married, she is pregnant, he is her obstetrician), it is impossible not to root for Jenna and Dr Pomatter. Matt Jay-Willis (Matt from Busted, whose acting credits include Wicked and EastEnders) is adorably awkward as the doctor and things get steamy once he has gorged on one of Jenna’s “biblical” pies. 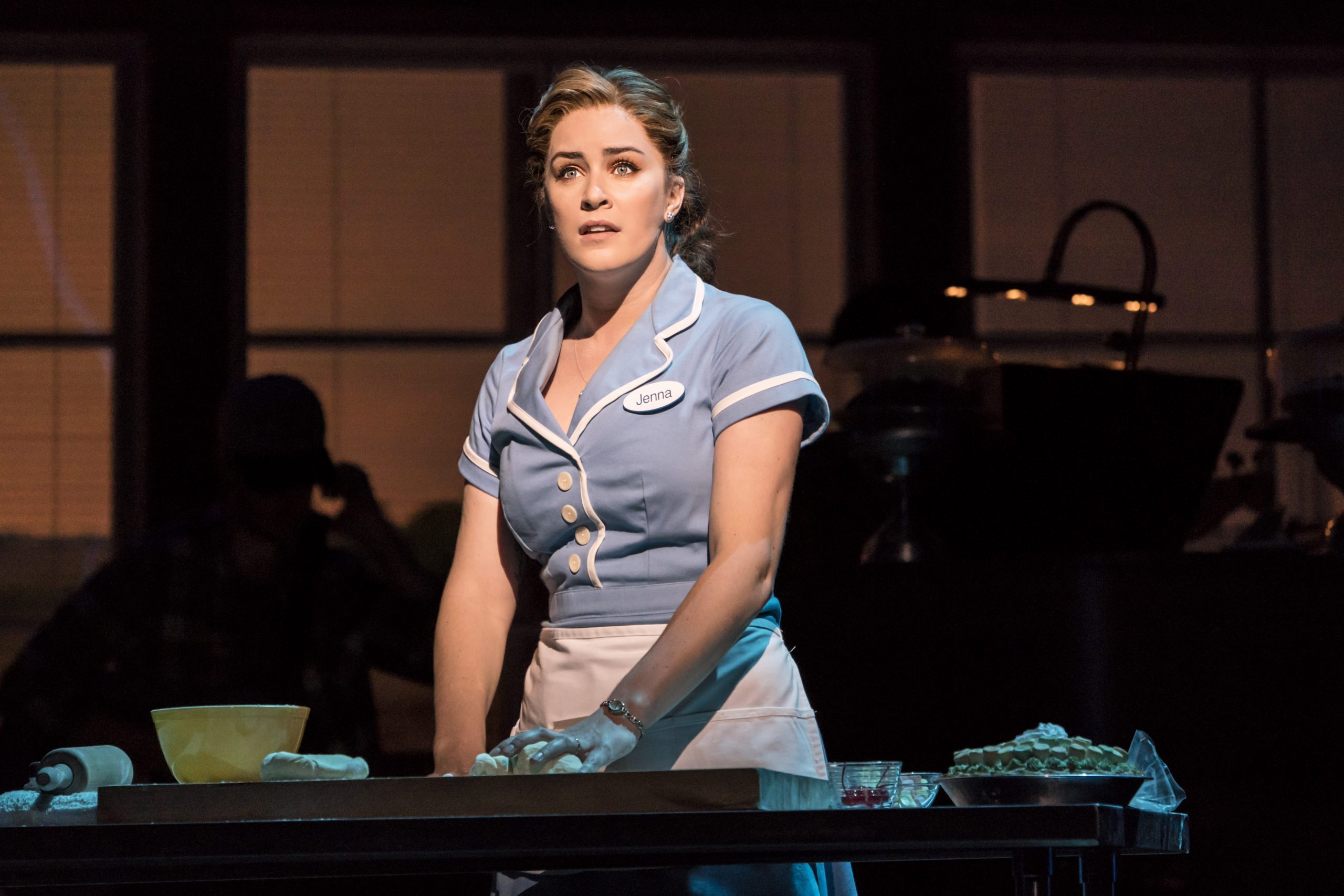 Waitress focuses on Jenna’s impending motherhood and quest for independence. Still, whatever she puts in those pies works wonders for her supportive waitressing friends too.

Nervous, quirky Dawn (Evelyn Hoskins) comes out of her shell when she takes a chance on online dating. Her suitor, Ogie (George Crawford), is an asthmatic tax auditor who eats white foods on Wednesdays. His frenzied attempts to woo her are hilarious and the pair bond over the ideal whipped cream to pie ratio and a fondness for revolutionary war re-enactments. Meanwhile, sassy, wisecracking Becky (Sandra Marvin) relishes a dynamic dalliance with the manager of the diner.

All the characters are flawed yet self-aware and likeable – except Jenna’s controlling husband Earl (played with the requisite blend of arrogance and jealousy by Tamlyn Henderson). No one likes him.

The songs are playful, poignant and layered with harmonies. The use of movement feels organic and enhances the rest of the storytelling. Ingredients are vigorously poured. Pies float dreamily and are held aloft in triumph. Subtle gestures – a shrug, a shoulder roll, a contraction – evoke changes of mood. Spirited group routines generate the hustle and bustle of the diner.

Ultimately, the feel-good factor is sky-high in Waitress, despite the darker themes. Life may not be as easy as pie, but enjoying this show is!