Sun beams are smiling and rainbows are shining! A good morning follows an evening spent watching Singin’ in the Rain.

Life is rather stormy of late, but this week’s offering at Milton Keynes Theatre is a musical to make you happy again. Jonathan Church’s glossy production captures the spirit of the classic 1952 film and chases dark clouds away.

You will enjoy a glorious feeling of escapism and discover a weatherproof sense of optimism. You might even want to sing and dance the whole night through. Or, at the very least, stay up late talking about the show. 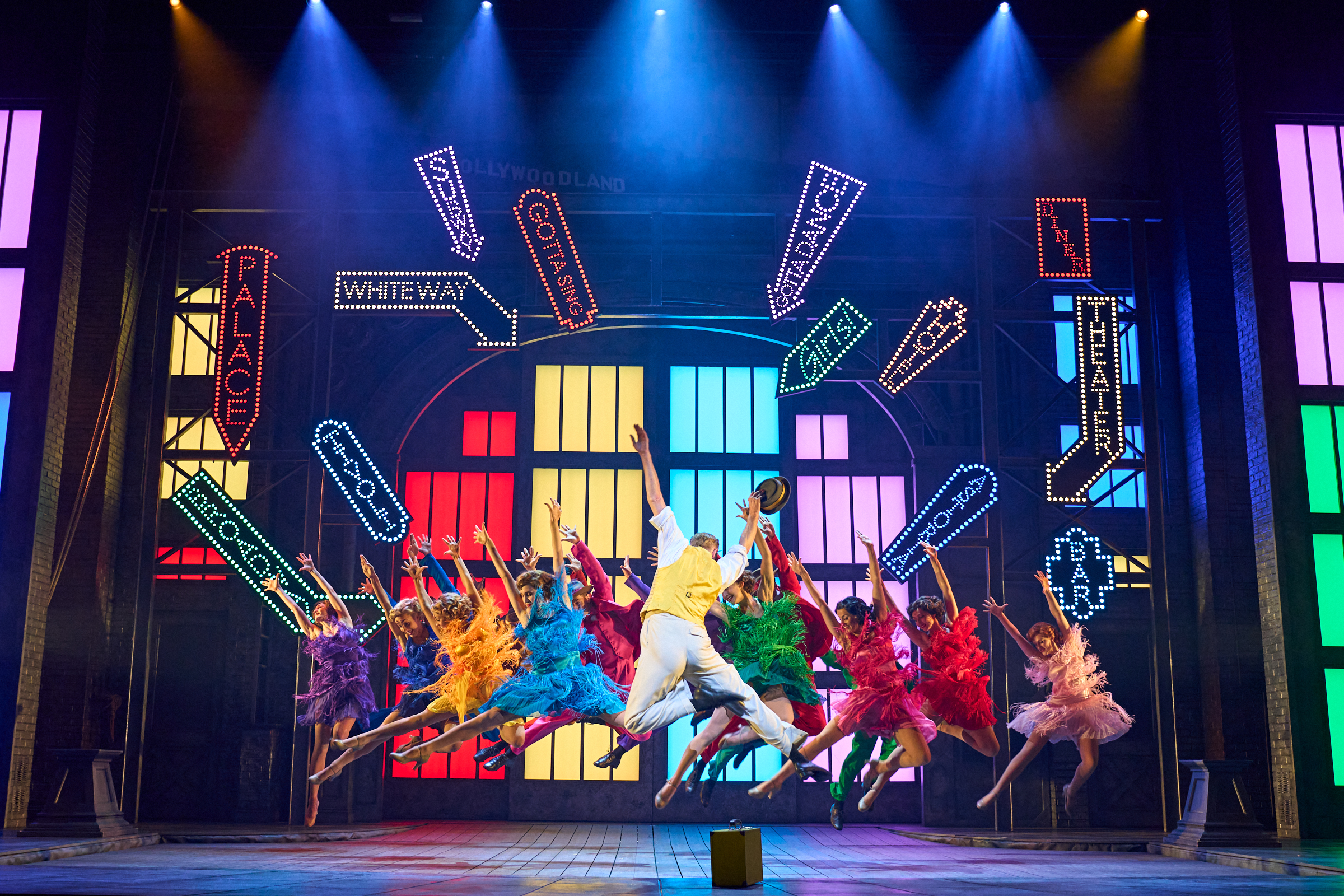 Singin’ in the Rain is a real tonic thanks to the invigorating qualities of all its elements.

To start with, there is the story. The film industry’s monumental shift from silent films to talking pictures provides the context for a behind-the-scenes tale of ambition, friendship and romance. This is a tribute to the magic and madness in the intoxicating, make-believe world of show business.

Sumptuous sets, gorgeous costumes and projections of monochrome film clips facilitate smooth transitions between reality and fantasy as Don Lockwood, the hero of Hollywood in the late 1920s, and Lina Lamont, his leading lady, are challenged to adapt to the demands of modern movies. Forget mute melodrama, they need to speak up – even sing. Unfortunately, Lina is stubborn, spoiled and unable to soften her shrill voice and abrasive “Noo Yawk” accent. What’s more, although the studio has created a fake romance linking the power couple, Don barely tolerates Lina. Thankfully, level-headed aspiring actress Kathy Selden agrees to dub Lina’s voice. Problem solved, until Lina gets wind of the plan.

Next, the cast. This production remains faithful to the film but filling the shoes of the original stars is mission impossible. Instead, the onstage performers are equipped to tap to the beat in their own style.

Sam Lips is charismatic, sings in velvety tones and dances breezily as Don. He shows impressive quality and control in every dance number; of note are his elegant arms and effortless turns. Equally beautiful mover Charlotte Gooch initially seems a fraction too glamorous as Kathy. Minutes pass and credit can be given where credit is due (as is the theme of this musical): her polished performance proves warm and convincing. Ross McLaren is magnificent as Cosmo Brown, Don’s madcap musical mate, delighting with slapstick silliness and the signature somersault. He raises most of the laughs, but Faye Tozer, who shines brightly as delusional diva Lina, is a scream too. She masters the art of getting every note wrong and plays Lina’s blissful obliviousness just right. 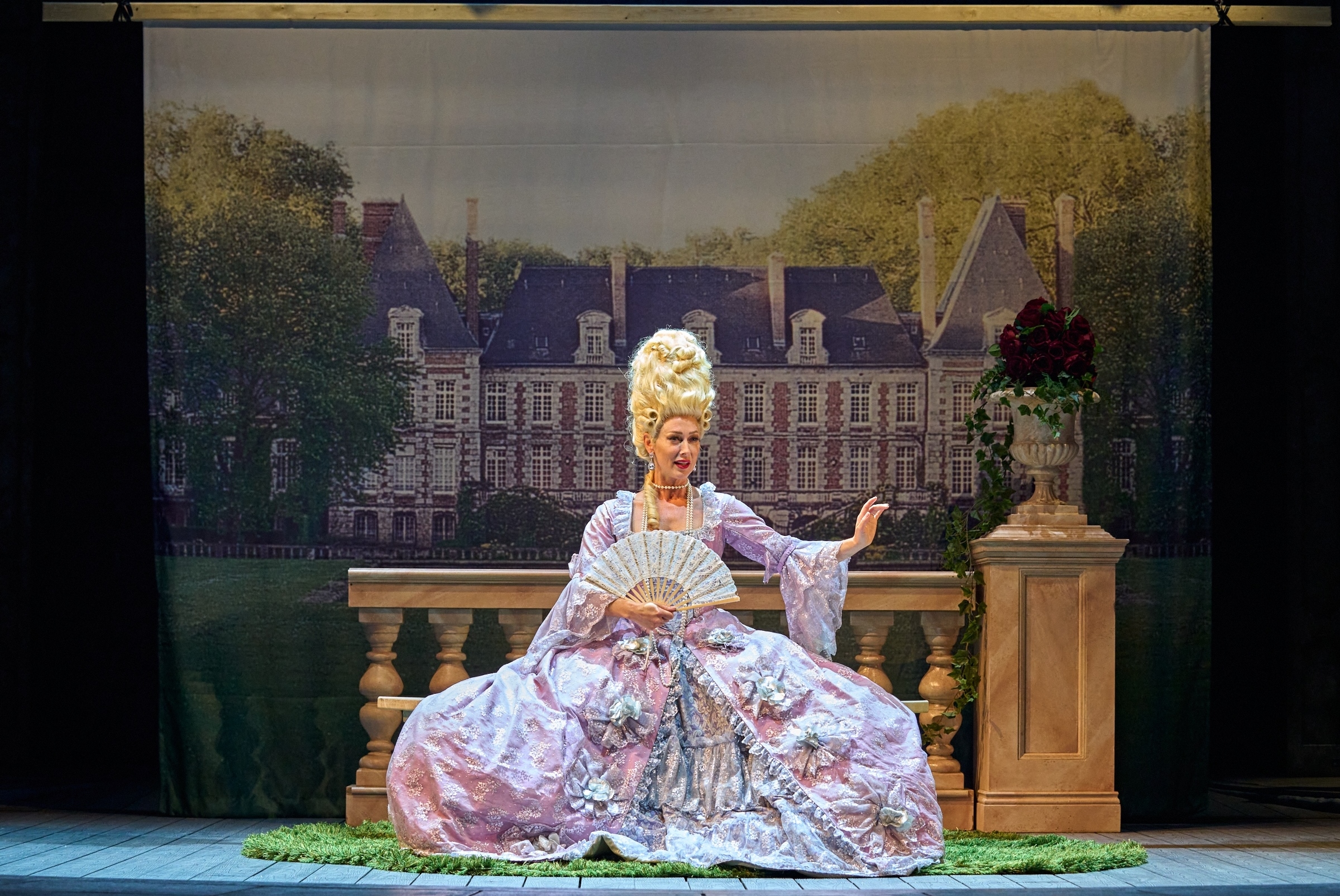 Obviously, Singin’ in the Rain would be nothing without the singing. Animated conversations segue into countless unforgettable songs. ‘Make ’em Laugh’ does just that. ‘Good Morning’ welcomes a new day in multiple languages and with an exhausting tap routine. ‘Moses Supposes’ is a tuneful tongue-twister (a mischievous riff on one of the dialect coach’s alliterative vocal exercises), punctuated by a rollicking dance.

And everyone has just “gotta dance”. Characters dance out their feelings by swaying, swinging, strolling, stomping, twirling, tapping, jumping, splashing. All the dancing seems spontaneous, which demonstrates how brilliantly Andrew Wright’s rousing choreography is integrated into this production. The dance action is part of the narrative, not a deviation from it. Except the deliberately fantastical ‘Broadway Melody’ routine, of course – this diverting sequence is deftly reimagined for the stage, dreamily dazzling us with neon pops of colour and whirling limbs.

Finally, come on with the rain! Umbrellas at the ready for that famous street sequence and drops of the wet stuff. Real water pours down from the rafters … and it is just as spectacular as everyone wants it to be. It drenches lovestruck Don while he deliriously dashes through the puddles, then his gleeful kicks send sprays over audience members sitting in the front few rows. He is giving free rein to his joy and nothing can dampen his enthusiasm. Later, the entire cast of talented performers splish-splash through their own cloudburst choreography. They swiftly weave in and out of dynamic formations made all the more eye-catching by the flashes of colour in the lining of their brollies.

Yes, Singin’ in the Rain is a tonic. There is no supposing about that. This is an all-singing, all-dancing, all-splashing show that is easy to enjoy. Whatever the weather in the real world, you are guaranteed to leave the auditorium with a spring in your step, a song in your heart and a smile on your face! 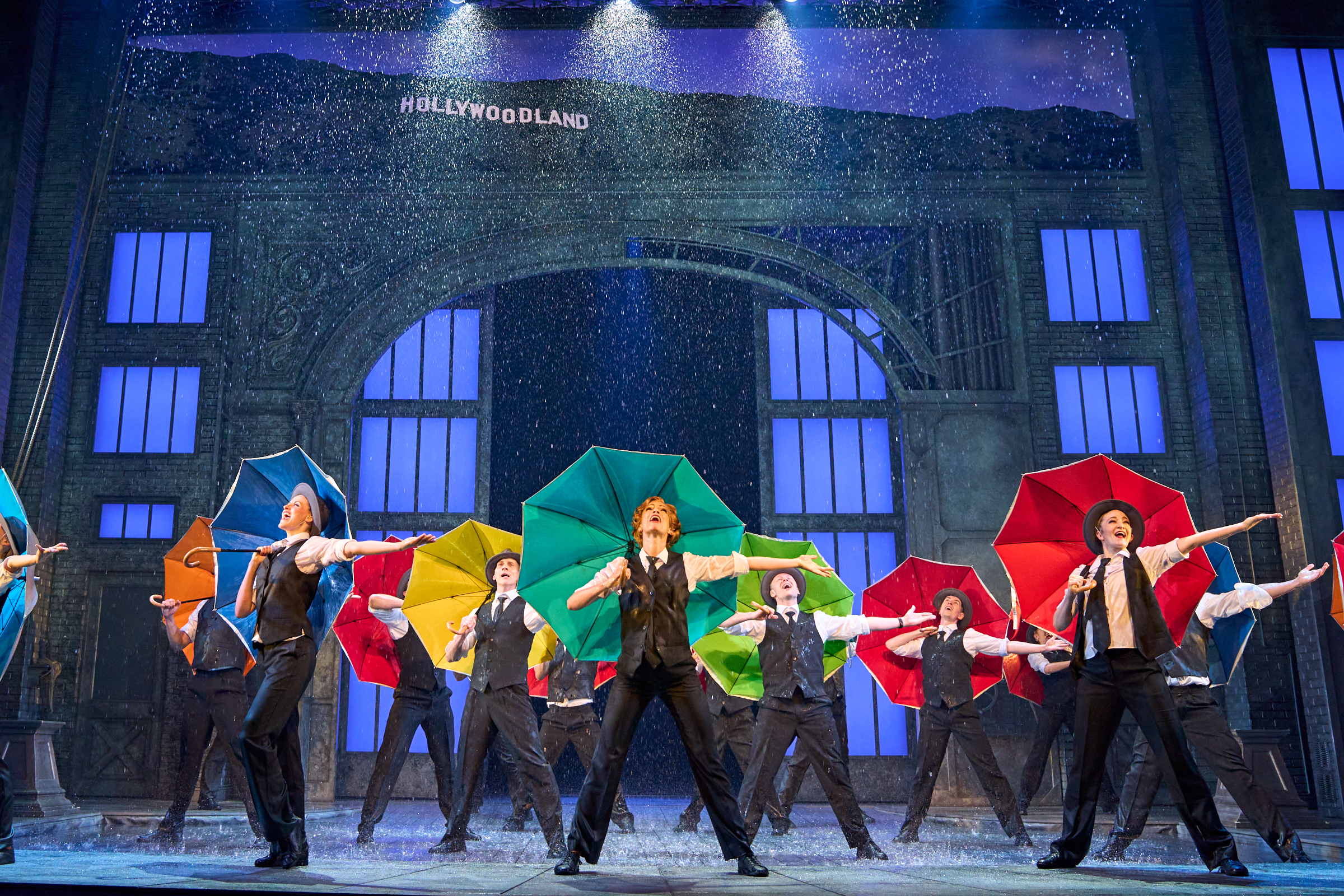 Singin’ in the Rain continues at Milton Keynes Theatre until Saturday 16 April. The UK tour continues until 20 August 2022.