Mamma Mia! is an ABBA-fuelled, feel-good jukebox musical. There is no way to resist it and no reason why you should want to.

Knowing me (fan of dancing and musicals before I could walk or talk) and knowing you (reader of theatre reviews, which suggests more than a fleeting interest), when all is said and done: without a song or dance, what are we? Miserable! If the last couple of years have taught us anything it is that the arts are what make life enjoyable.

Mamma Mia! takes the pleasure derived from singing, dancing and making merry with loved ones, then amplifies the good vibes to bring audiences joy. The narrative includes sweet reminders about what being family means and how sometimes taking a chance is necessary. Really though, the story is just a vessel for the music, which is played live in all its pounding, glittering glory. It’s a light-hearted way to not only indulge the dancing queens and superfans, but also convert the miserable.

This undemanding show simply asks that you bring your thank yous for the music. In return, it lifts your mood with ridiculously catchy songs, dynamic dance routines and fun in the sun. 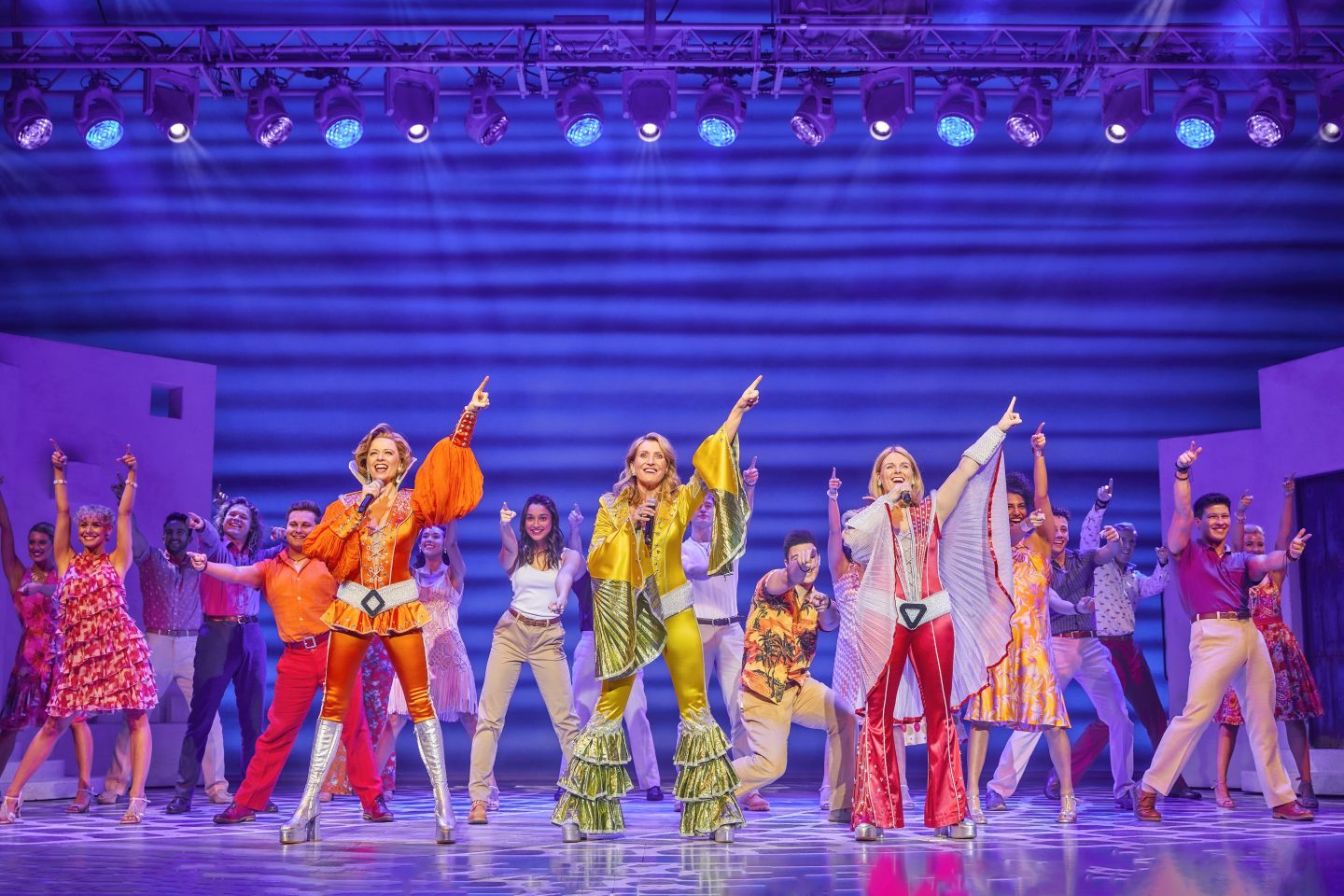 The story of a mother, a daughter and three possible fathers unfolds swiftly to the danceable rhythms and relatable themes in ABBA’s somehow timeless tunes.

The mother, Donna, is a fiercely independent single mum who owns a taverna on a tiny Greek island and was once lead singer of Donna and the Dynamos. The daughter, Sophie, is preparing to marry her fiancé, Sky, and dreams of her father walking her down the aisle. Unfortunately, Sophie has no idea who her father is – until she snoops through her mother’s old diary and finds the names of three men Donna had flings with the summer she fell pregnant.

The three possible fathers are Sam Carmichael, Bill Austin and Harry Bright. Sophie secretly invites them to the island, certain she will be able to tell which one is her father upon meeting them.

When the unsuspecting candidates for the position of long-lost father arrive, Sophie is more confused than ever and Donna is horrified to see her former lovers. Supported by their respective female friends (Sophie’s besties Ali and Lisa are her bridesmaids, Donna’s lifelong pals Tanya and Rosie are the Dynamos) who sing backup to their innermost thoughts and feelings, Sophie and Donna must reconsider what they want from life. It all culminates in a wedding none of them will ever forget.

An abundance of ABBA’s greatest hits express emotions and get the party in paradise started. The familiar music is combined with tongue-in-cheek humour for boppy, uplifting escapism. Yes, it is silly and some of the dialogue serves no purpose other than to introduce the next song. But it is all so much fun to watch – and looks like it is fun to perform too! 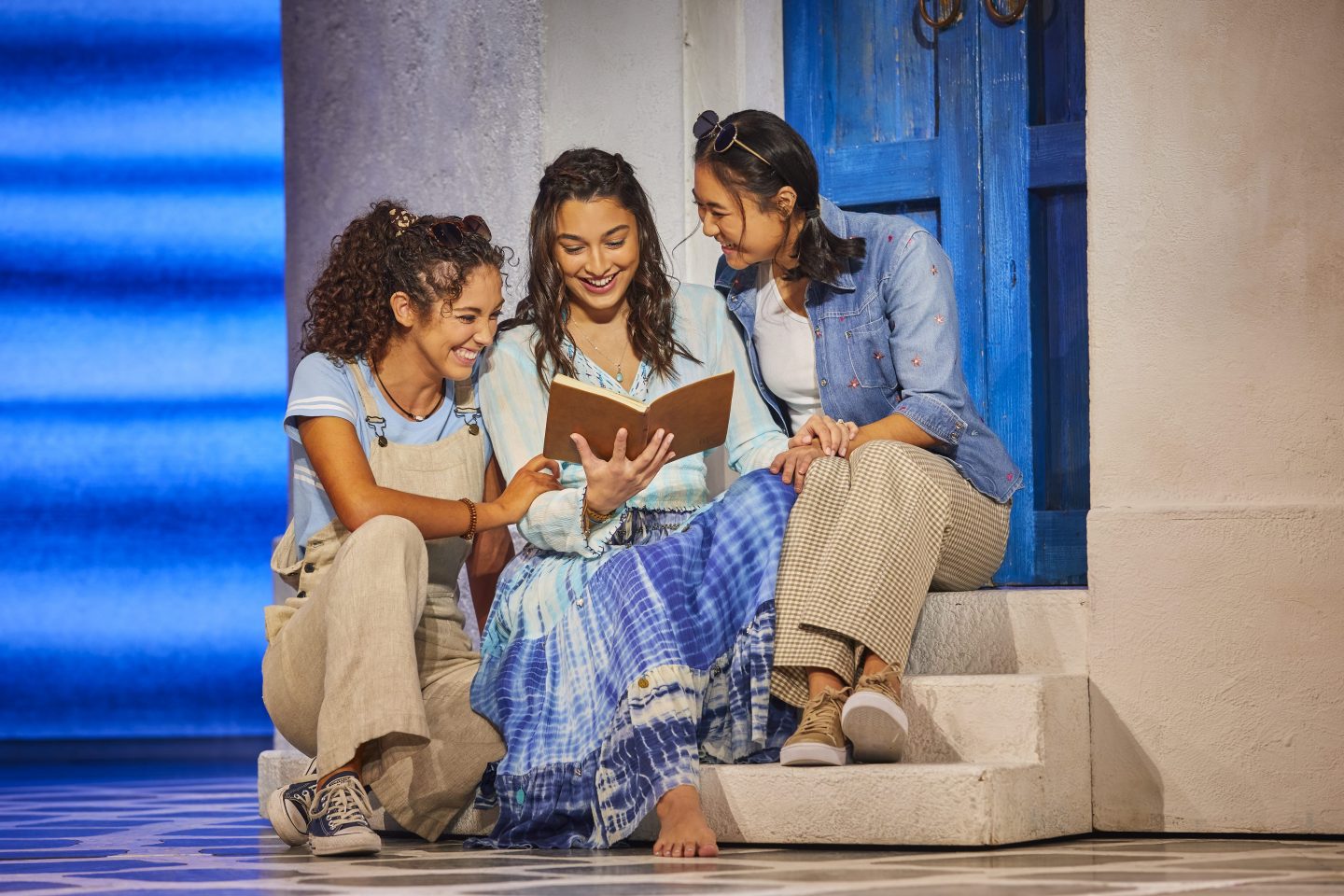 Jena Pandya is vibrant and sincere as bride-to-be Sophie. She has stage presence and the voice to match. Her interactions with Jasmine Shen and Mariella Mazzilli as Ali and Lisa are all about girlish giggles and youthful exuberance. The trio firmly establish their tight bond during ‘Honey Honey’, which sets the tone for the entire show. Her interactions with Toby Miles as Sky are suitably spirited, affectionate and amorous.

Sara Poyzer lets loose as mamma-of-the-moment Donna. She impresses in every number, whether reliving that rock-chick disco past or revealing heartbreak. She bounces off Helen Anker and Nicky Swift as Tanya and Rosie brilliantly. Individually, all three women are funny and a force to be reckoned with. Together, the Dynamos are pure dynamite.

Richard Standing, Phil Corbitt and Daniel Crowder form a third cheeky and cheerful triad as Sam, Bill and Harry. They are convincing and amusing as strangers who meet on an island full of memories and possibilities. Their dad dancing is featured effectively during Sophie’s hen do when – under spotlights and surrounded by a slowed-down ensemble – they each realise why they have been invited to the upcoming ceremony.

A medley of ABBA melodies played as an overture guarantees that fidgety feet, nodding heads and swaying torsos are evident in the auditorium way before shapes start being thrown on the stage. Once it gets going, Mamma Mia! features physical comedy throughout, so Anthony Van Laast’s choreography is energetic and playful.

A frog-marching flipper ballet interrupts Sophie and Sky writhing around in the sand during ‘Lay All Your Love On Me’. Sky’s mates bound in wearing wetsuits and snorkelling gear, ready for a stag do with a difference. Later, young bartender Pepper (James Willoughby Moore) bends over backwards to flaunt his best moves for thrice-divorced Tanya. He provides breakdancing, come-hither convulsions and a series of straddle jumps during ‘Does Your Mother Know’. Never-married Rosie and adventurer Bill seat-hop around the chapel during their duet, ‘Take A Chance On Me’. Their resolve to keep their distance doesn’t last long. 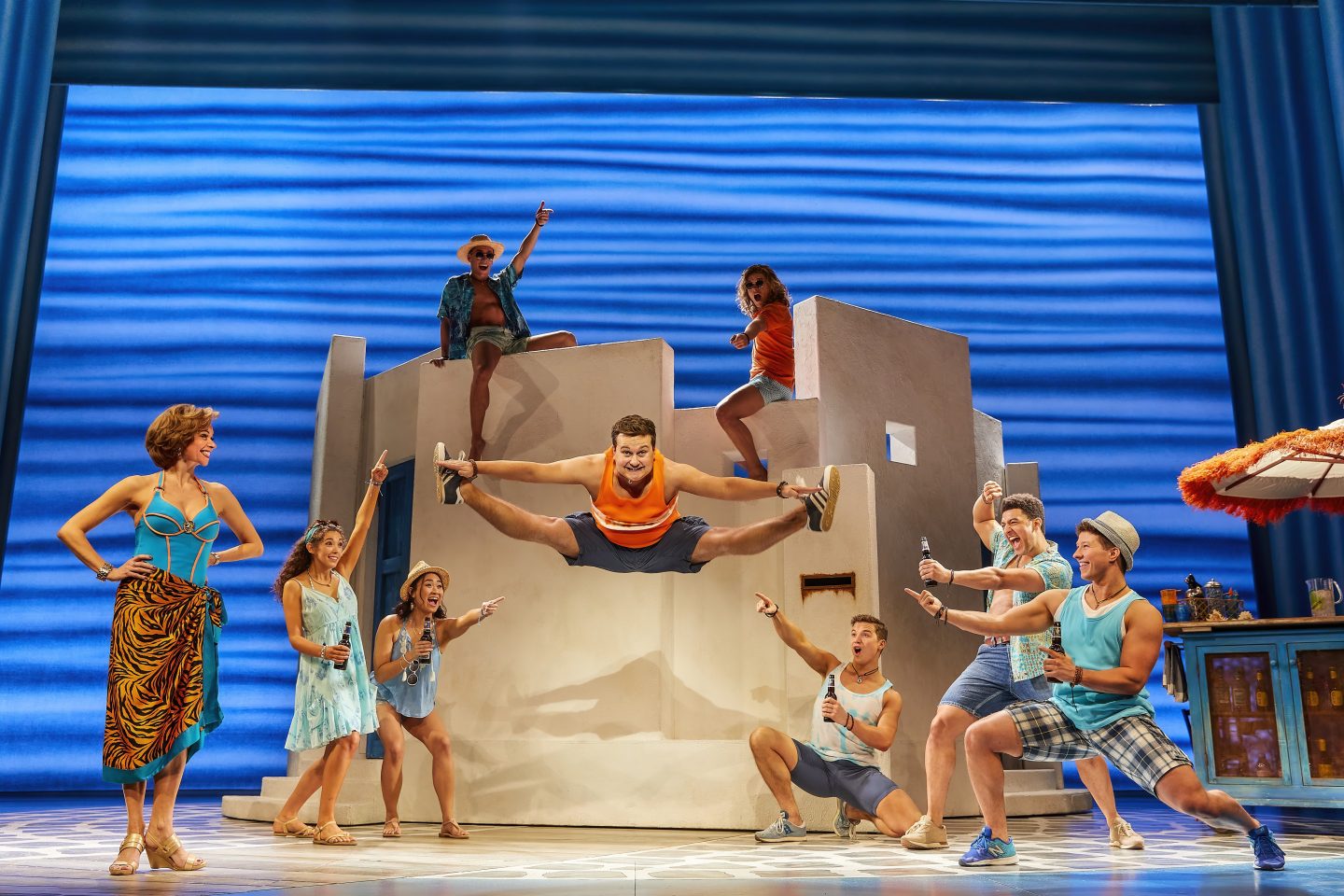 Ensemble performers dance and execute understated tricks as they transport chairs, tables and other items of furniture – spot the forward roll across a mattress amongst all the sliding, spinning and shimmying that occurs during the scene shifting. A simple revolving set depicts the white-washed taverna. It opens up and rotates to create a courtyard, a bedroom, a bar, a beach, a chapel. Atmospheric lighting conveys the warmth of the sun-kissed island, the royal blue waves of the Mediterranean Sea, the torment of confusing emotions and the excitement of a night out.

The holiday feeling and riot of music, movement and colour extends to the costumes too. Everyone looks good in their good-weather clothes. Everyone looks fabulous in their groovy 1970s garms. The sunset palette of the wedding finery is stunning.

Three huge ABBA songs are performed back to back as the triumphant finale. By this point, no one in the audience needs any encouragement to get up on their feet and clap, dance and sing along.

Do you fancy a great night out? To celebrate the Lionesses’ Euro 2022 victory, get in the mood for the UK hosting Eurovision 2023, reminisce about past wedding dancefloor antics and holiday romances, or make the most of a staycation? If your answer is a resounding “I do”, make sure that somewhere in the crowd there’s you!